My love for Aglio Olio is much more than a Spaghetti Bolognese. Actually I love both but preferred the former more. So I decided to master it in my kitchen, although to some it may be too easy like ABC. Well... you think I care? Nope. Just gonna do it to perfection. At least to my palate, and my hub. Because he prefers this type of spaghetti/pasta than those creamy and saucy type. Oh I don't like creamy type by the way. 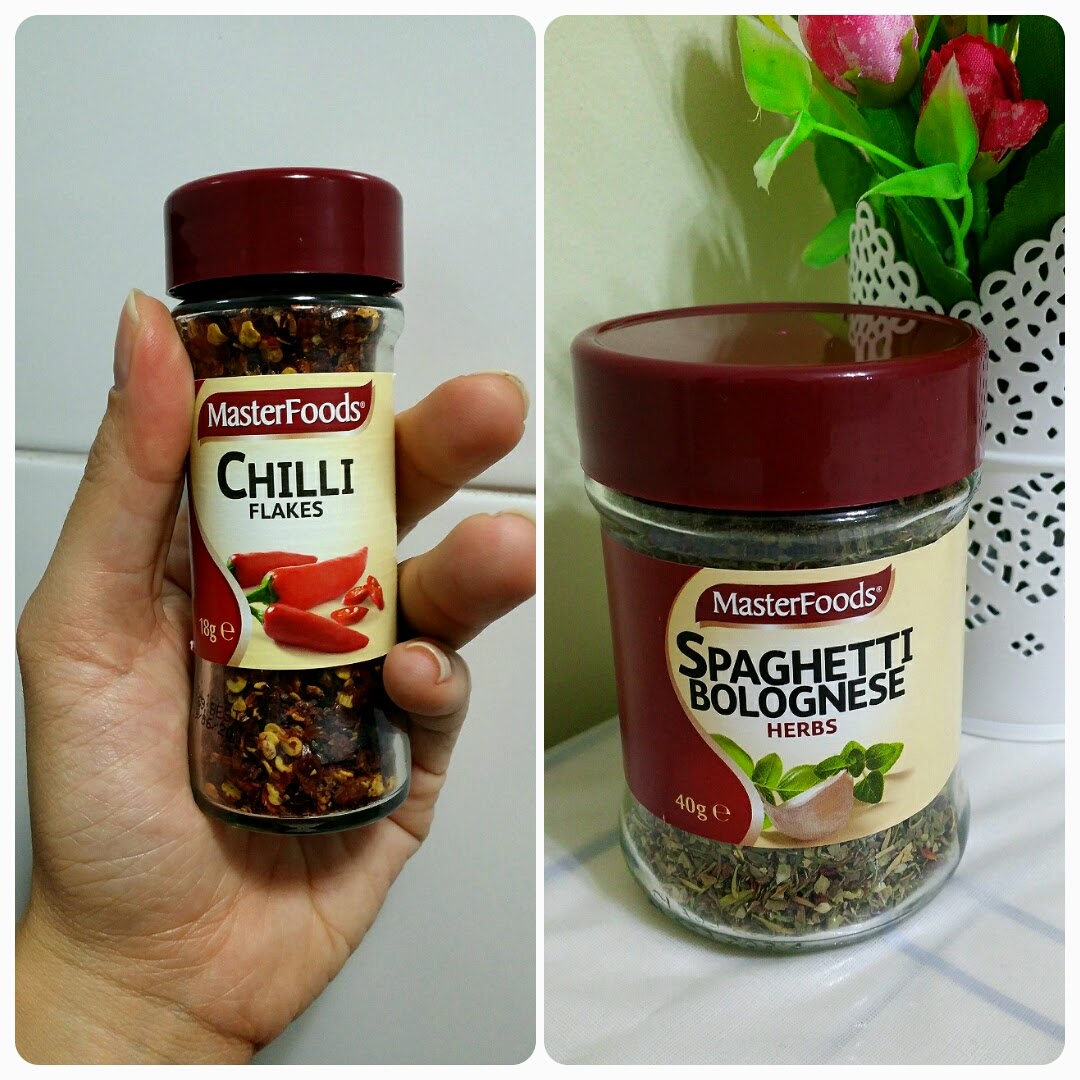 Bought these 2 bottles at NTUC and immediately recruited into my Kitchen/Cooking Staples. If you are reading my blog, I have previously wrote a short piece on my Kitchen Staples. I think is more like Kitchen & Cooking Staples. Great. Now with +MasterFoodsAustralia range of herbs, spices & sauces, I'm more confident right now in my mastering of Aglio Olio.

The Spaghetti Bolognese Herbs brings out the fragrance which smells so familiar whenever I had Aglio Olio. A teaspoon of this herbs is enough to get your dish going. This bottle has other alternative use like ........ So not just for spaghetti. As for the Chilli Flakes, it just enhances the taste with spiciness. Well... to me it is a must in Aglio Olio. I think right now with these 2 bottles, I should maximize the use instead of just on Aglio Olio cooking. 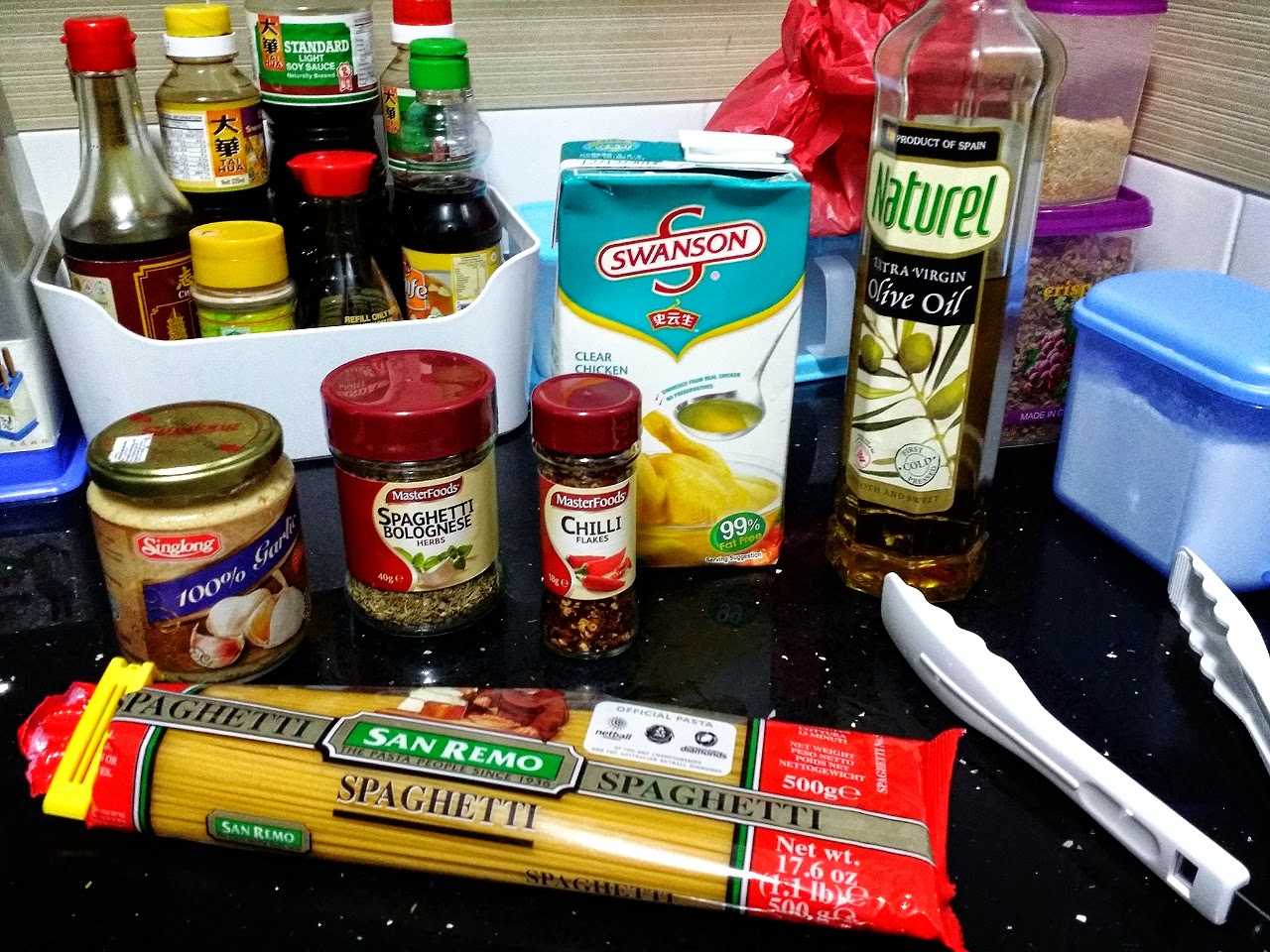 Actually I minus away that chicken broth and added onion into it. The last round I tried with onion was good. I'm almost there to 99% perfection. Familiar right? Garlic and chicken broth are my kitchen staples a.k.a cooking staples. Olive oil is being recruited in the list now. As usual I go for Extra Virgin Olive Oil and also the cheapest of all with a Healthy Choice logo. I actually like my purchases to have the logo if possible. Less guilt though it may not be useful/helpful.

I used this San Remo brand of spaghetti always because it is cheaper than other brands. But soon I shall have a change of brands so after I finish with this pack. I guess it doesn't matter which brand but is the person who put the effort and heart into whipping up this simple yet skills needed dish.

Probably in future, I use fusilli and linguine for Aglio Olio. My preference other than spaghetti. The hub preferred angel hair spaghetti. I don't mind either. 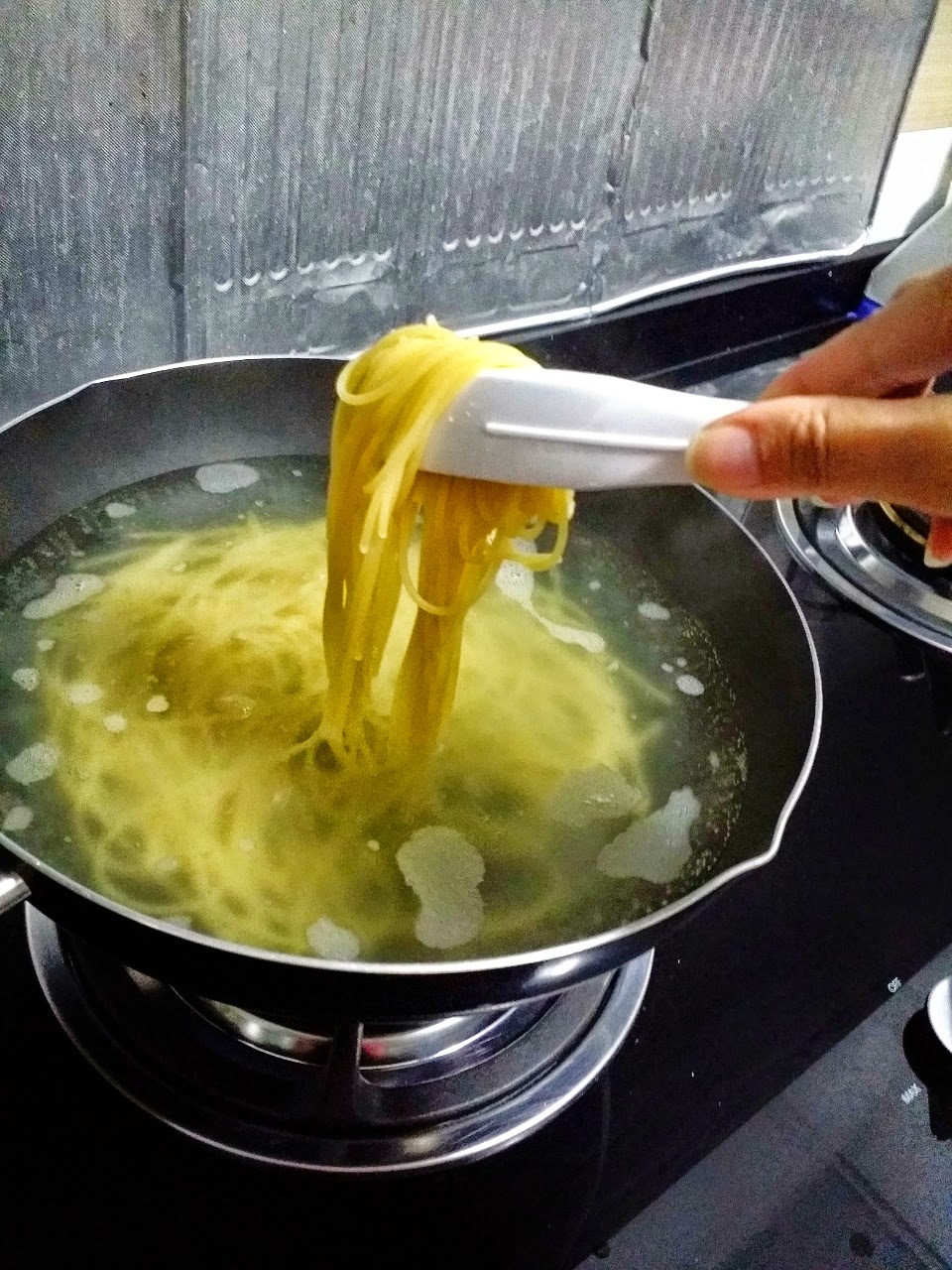 After researching online, it seems much more easier to use a small tong to handle the cooking than a pair of chopsticks or Chinese turner. Seriously, I tried it when I cook beehoon and it is so much convenience too. Tongs, you are the best kitchen helper thru out the cooking process. No turner for aglio olio from now. 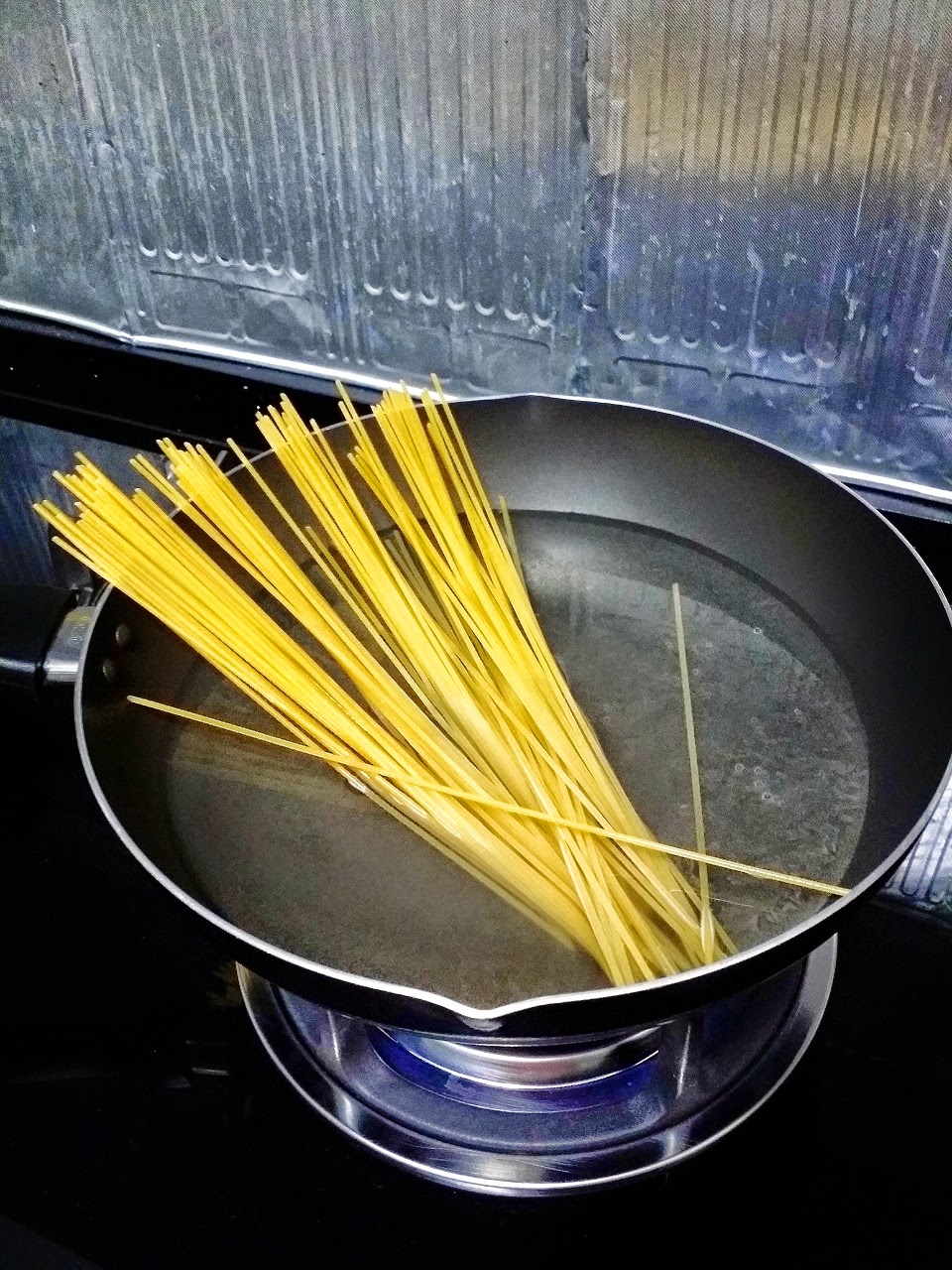 To save time and effort in washing, I used my big pan to boil and also cook my aglio olio. I seriously love cooking but not the washing part. But then the fact is that whether my husband or I cook, I will be the one cleaning up, like most of the time. That's really shitty. But just got used to it. And by using the pan to do 2 things is actually feasible. So I adopt it till now.

Save water too! Use kitchen roll to wipe off whatever 'food debris' and you can continue from there again. 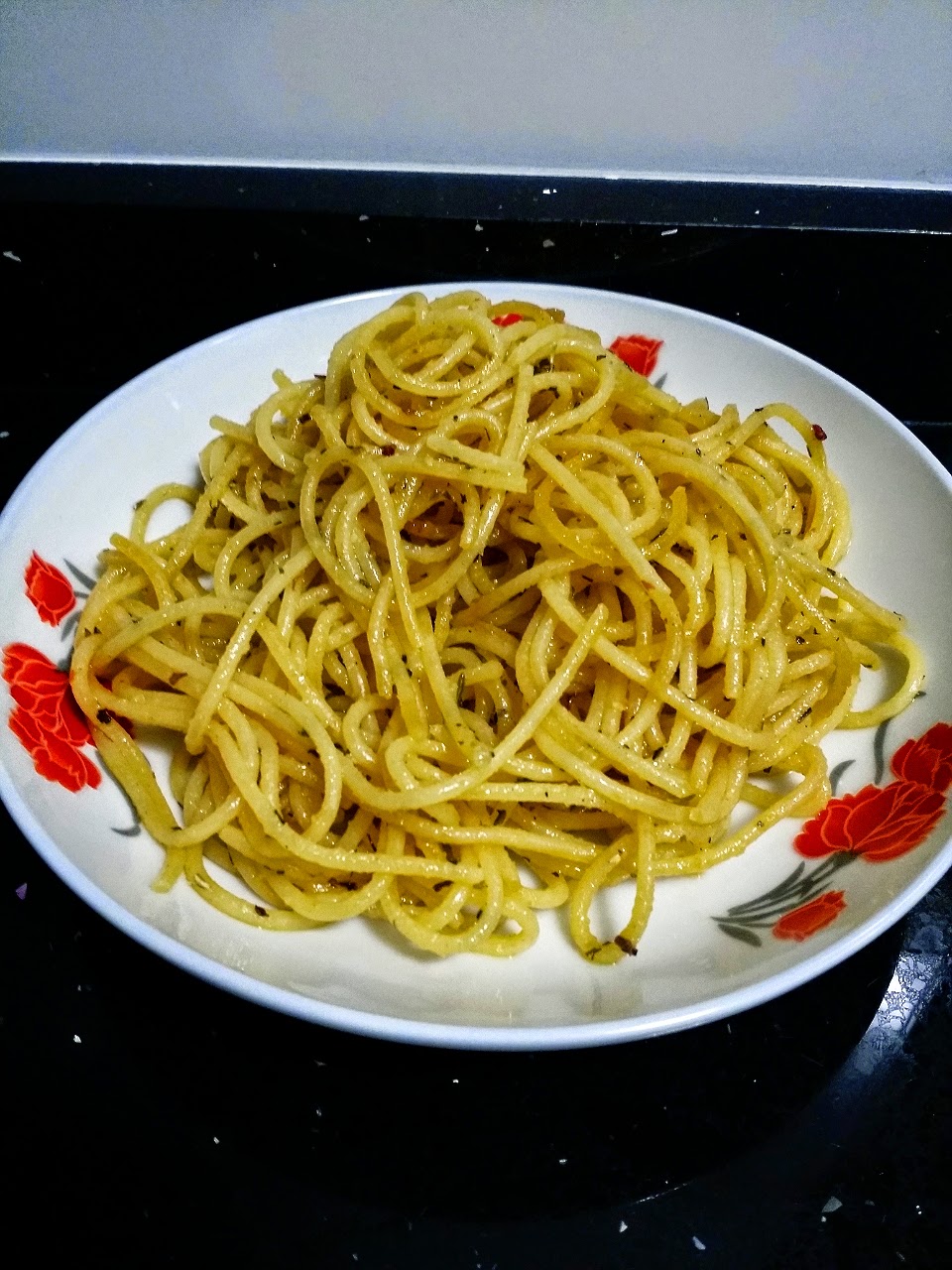 I think this is my 1st attempt without chili flakes. I just bot that herbs which I mentioned above and so I throw in like 2 teaspoons. Finally the fragrance came out. The smell is so familiar every time I had aglio olio out there. This attempt is dry but edible. I realized that chopped garlic will be more appropriate than the minced garlic that I have been using from start. Because it tastes a little sandy because of the minced garlic. However this doesn't stop me from using it. There must be some way I can do to minimize the sandy texture. Not the problem with spaghetti. 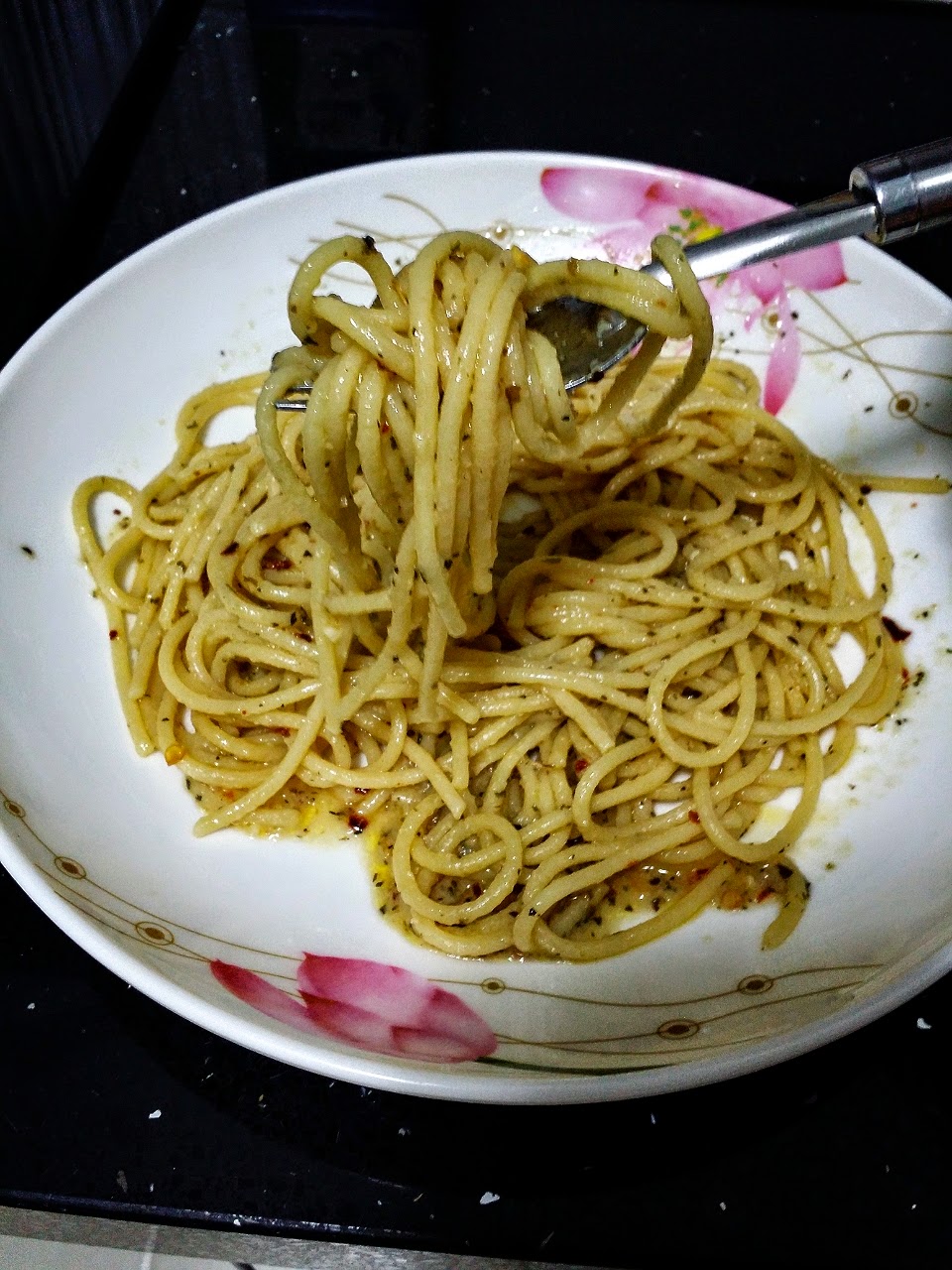 This attempt is after I bot chilli flakes. I guess I never have a good control of oil and it turns a little oily. The taste is weird when I put in chicken broth. So I sentenced chicken broth to lifetime imprisonment from Aglio Olio cooking. It finally has that mild spicy taste which based on my experience it should have. Almost there. 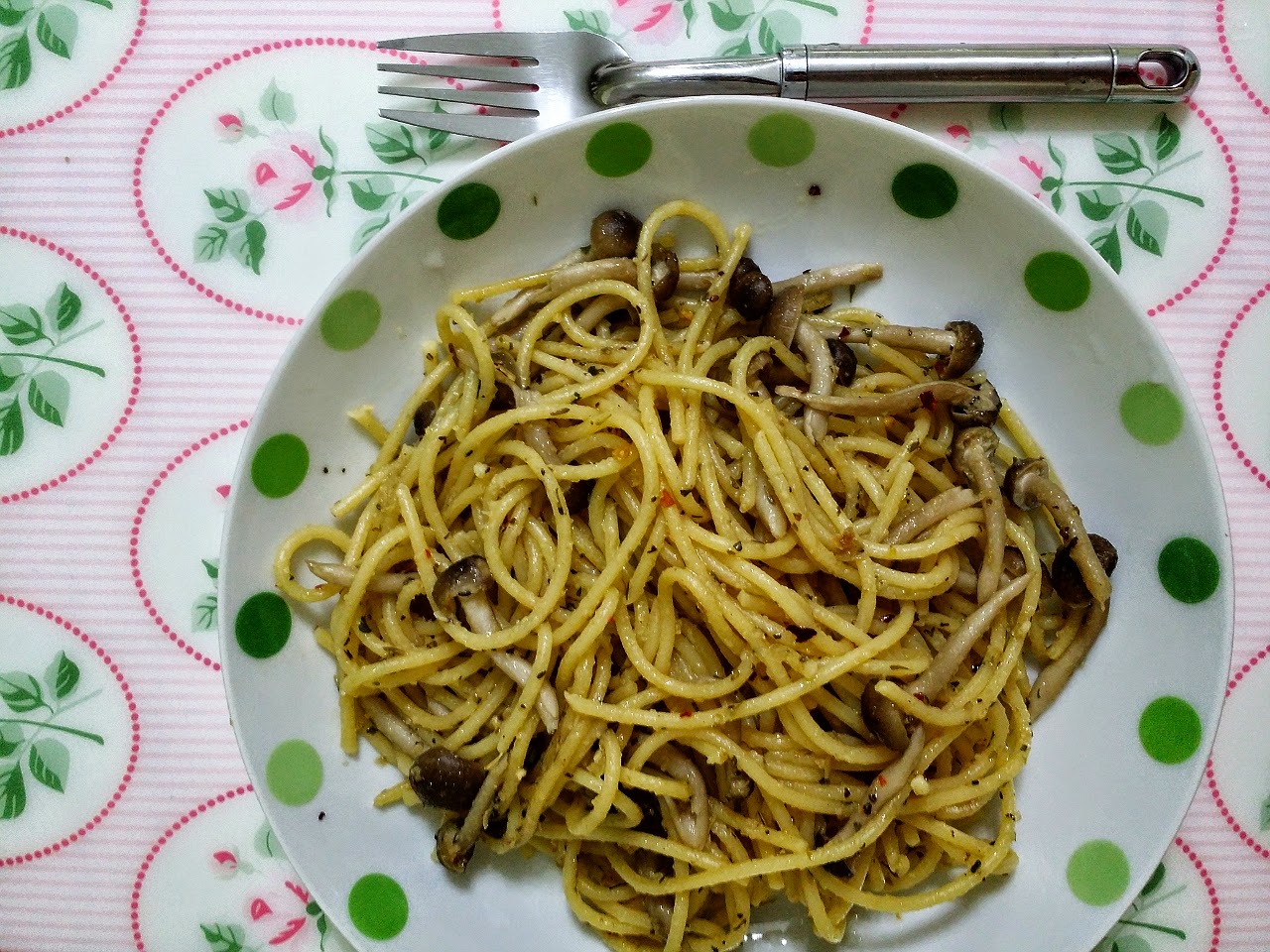 This is my favourite of all attempts as it is not dry and is near perfection. I guess by practicing more, you get the hang of it. To me, you just have to focus and have all the condiments with you so that you won't get jittery while cooking.


Another thing my husband brought up is the spaghetti taste. A little strong. Probably my condiments are not enough. It is like you don't want that fishy smell/taste from the fish before steaming or frying. He said I should cook a little longer but then again, I cook till al-dente. A throw of salt during the boiling process. Never mind. Try again.


I think the Buna shimeiji mushroom used in this attempt is more than suitable compared to others. At least for me. I'm a mushroom lover and any types of mushrooms, you name it, I love it. Probably I should try Shiitake mushrooms which is quite commonly used. And by the way, I boil the mushrooms together with spaghetti for probably awhile like 1 min. 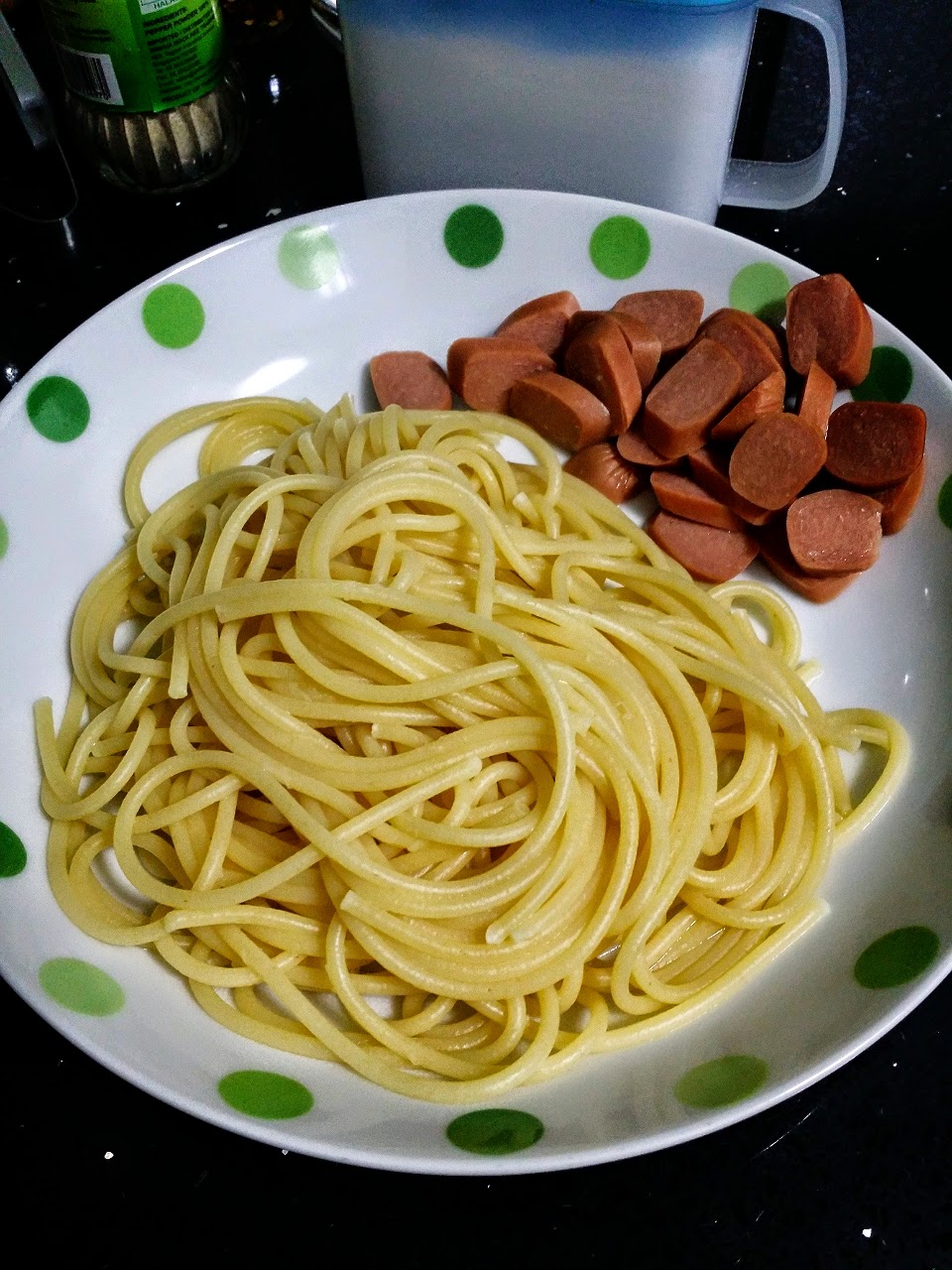 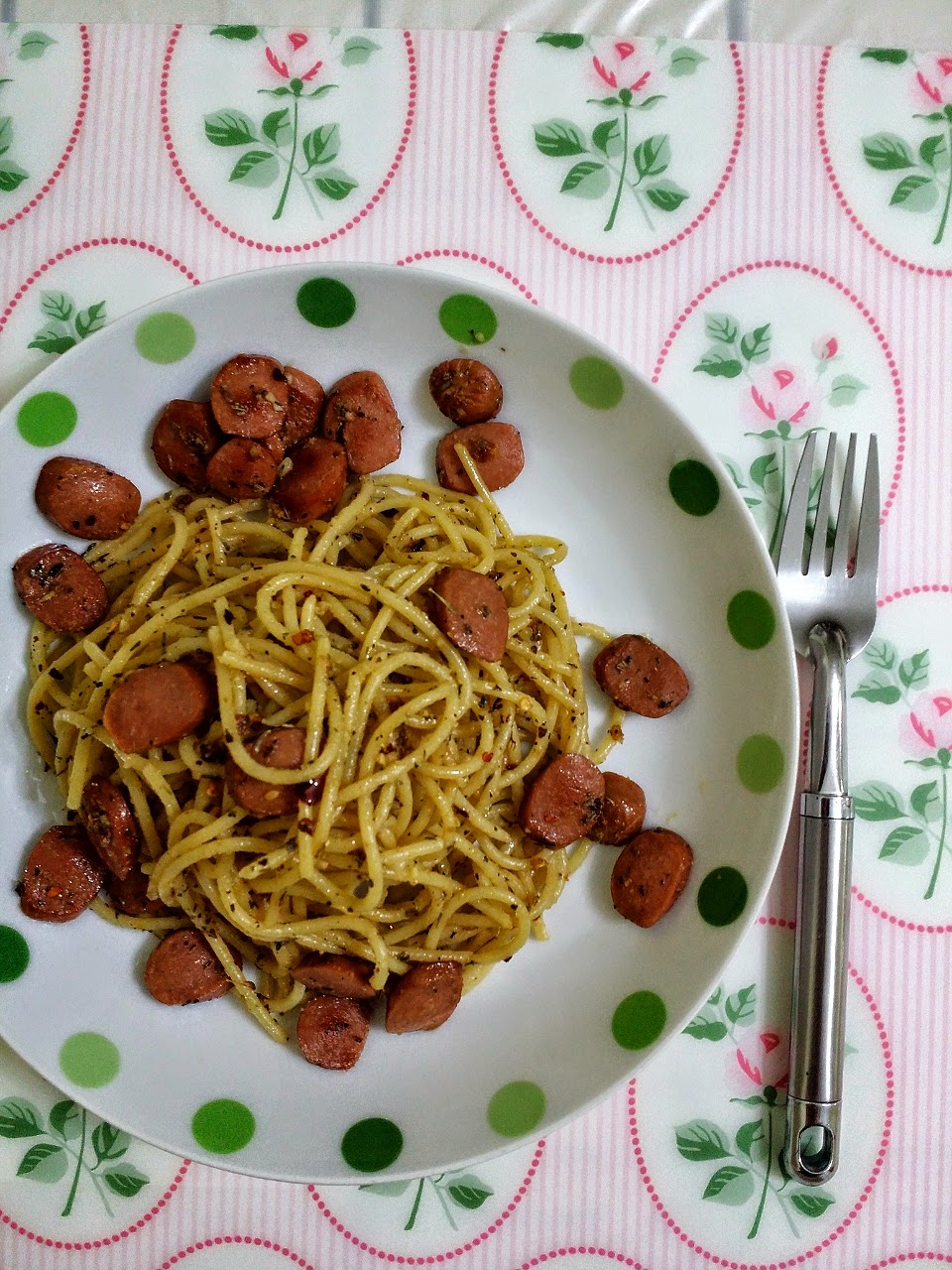 I somehow find that hotdogs a.k.a sausages can enhance the taste of spaghetti because it is salty on its own. I didn't really put much salt. I can say this one is good and the dryness part is spared. I think now I know how to control a bit on the oil part. Flavourful but not very heavy taste. I like but if it is a little more heavy in taste, that's perfect. The hotdogs were boiled together with the spaghetti before cooking like a minute again (same as mushrooms). But it did not overcooked. Perfect. All I realize is that I have to be fast to attain the taste and texture that I want for this attempt.

And I used my favourite sausage brand, Valley Chef. My one and only favourite. Taste totally different from any other brands. 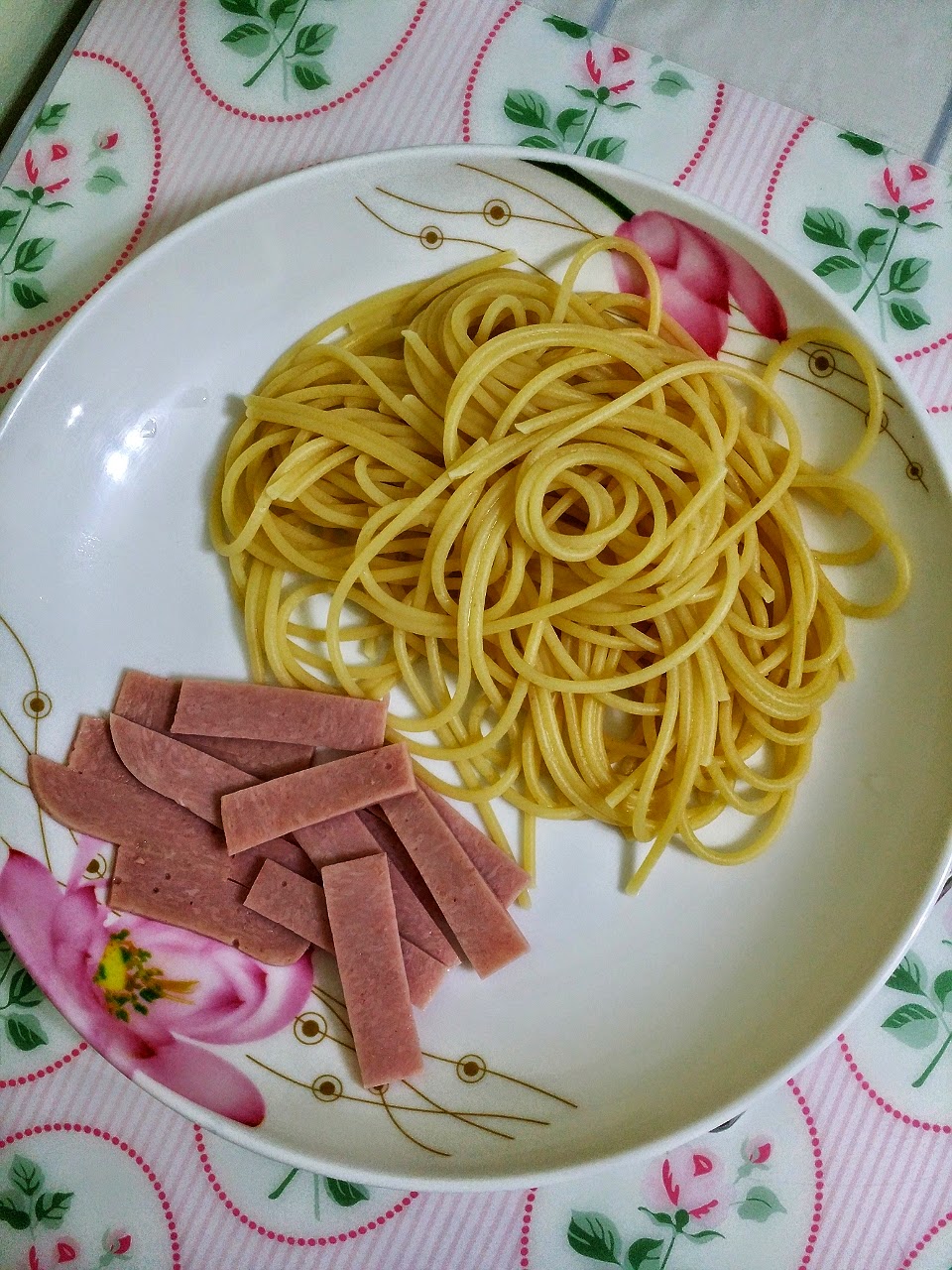 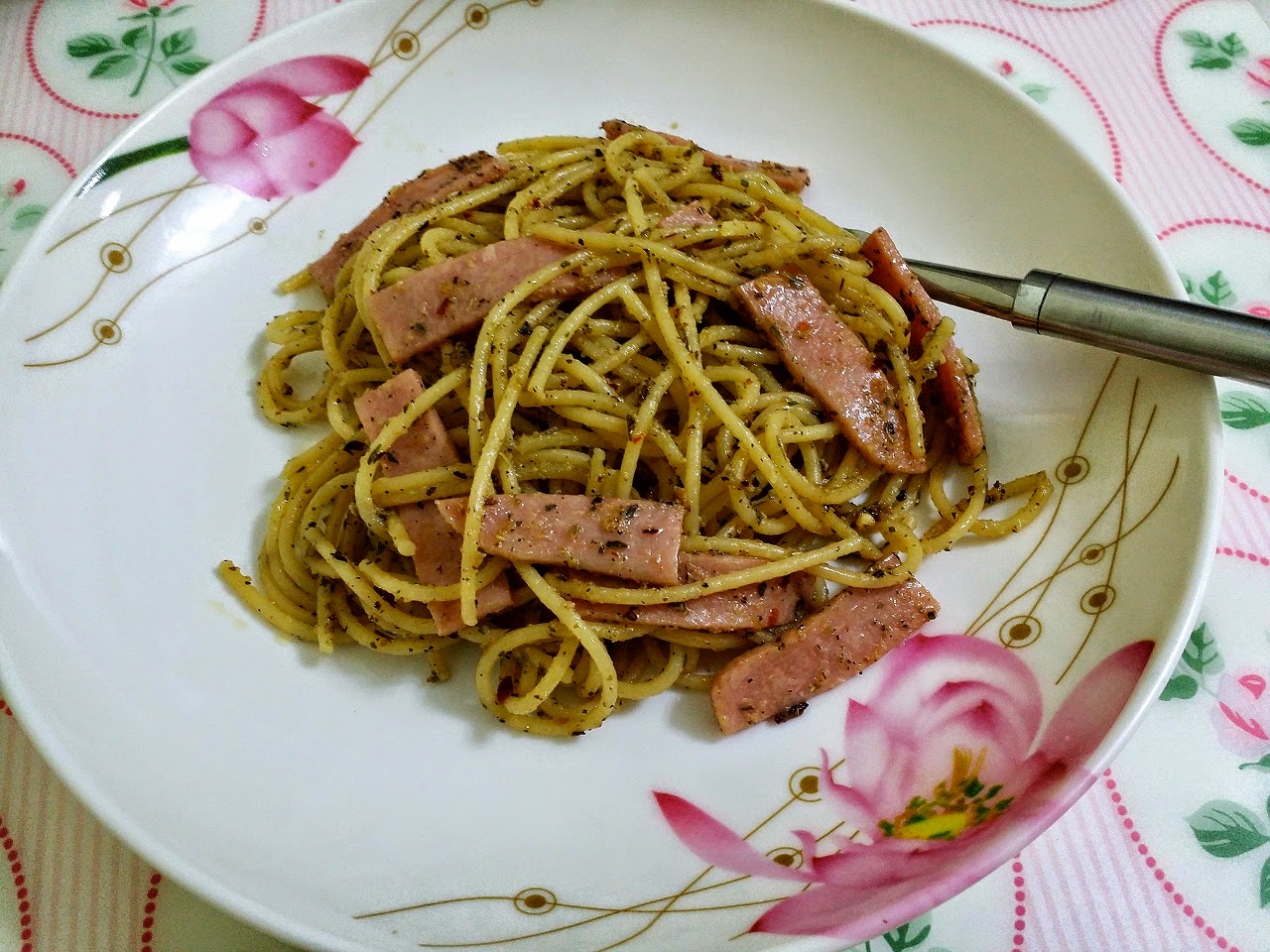 This is another round of cooking. As usual, I boiled the ham and spaghetti together so as to save some time. Today is much better than my previous trial on sausage spaghetti. The flavour has finally surfaced out. I think I put a little too much of salt because I cooked a little bit. But the taste and smell finally purged out. So glad. This is the taste that I wanted. I guess I need to control a little on salt. Previously never put much. But today just try. And the ham enhanced the taste too. Love it. I have gotten control of the oil. Well done this time round. Not dry too even when I put inside the oven to get away from houseflies (if there is). Wonderful. 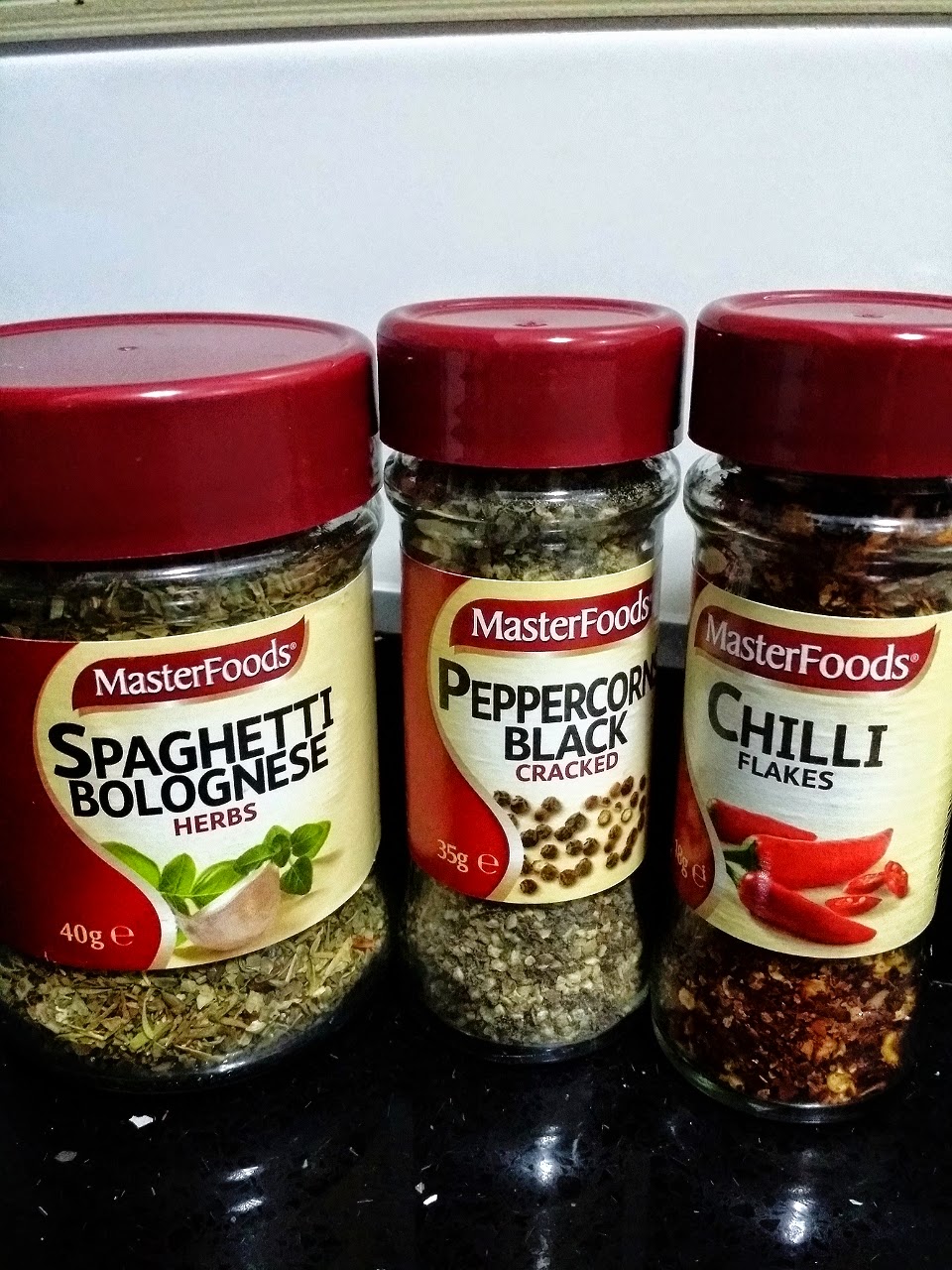 Guess what I have recruited? My new bottle of Peppercorn Black Cracked. First trial on this attempt. Taste good this time round. Manage to control my salt input. Now even when I put it aside for awhile, it doesn't gets dry. Woohoo... How wonderful it can be! I guess slowly I got the hang of cooking a nice aglio olio.... This attempt was just all of a sudden thought while I was working. Probably when my husband is not around. Wow... being alone is good some times. 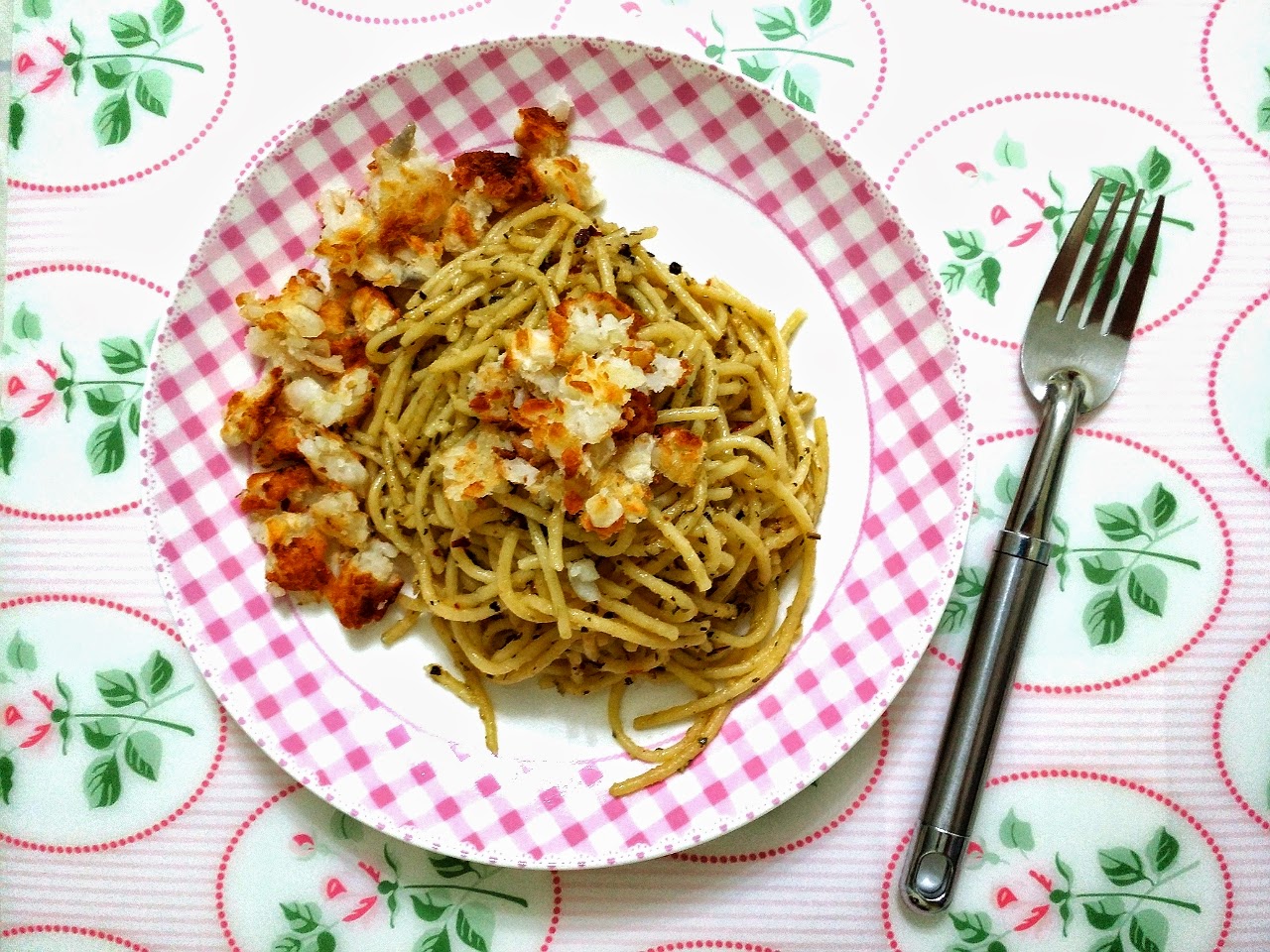 I don't know hashbrown blends it quite well with spaghetti. Amazing.

I airfry the hashbrown for 5 mins to defroze. Then another 10-15mins to really airfry/cook it. Cut or chop it till small pieces like what you see above. Thumbs up to this attempt. Let me try to brainstorm more flavours. 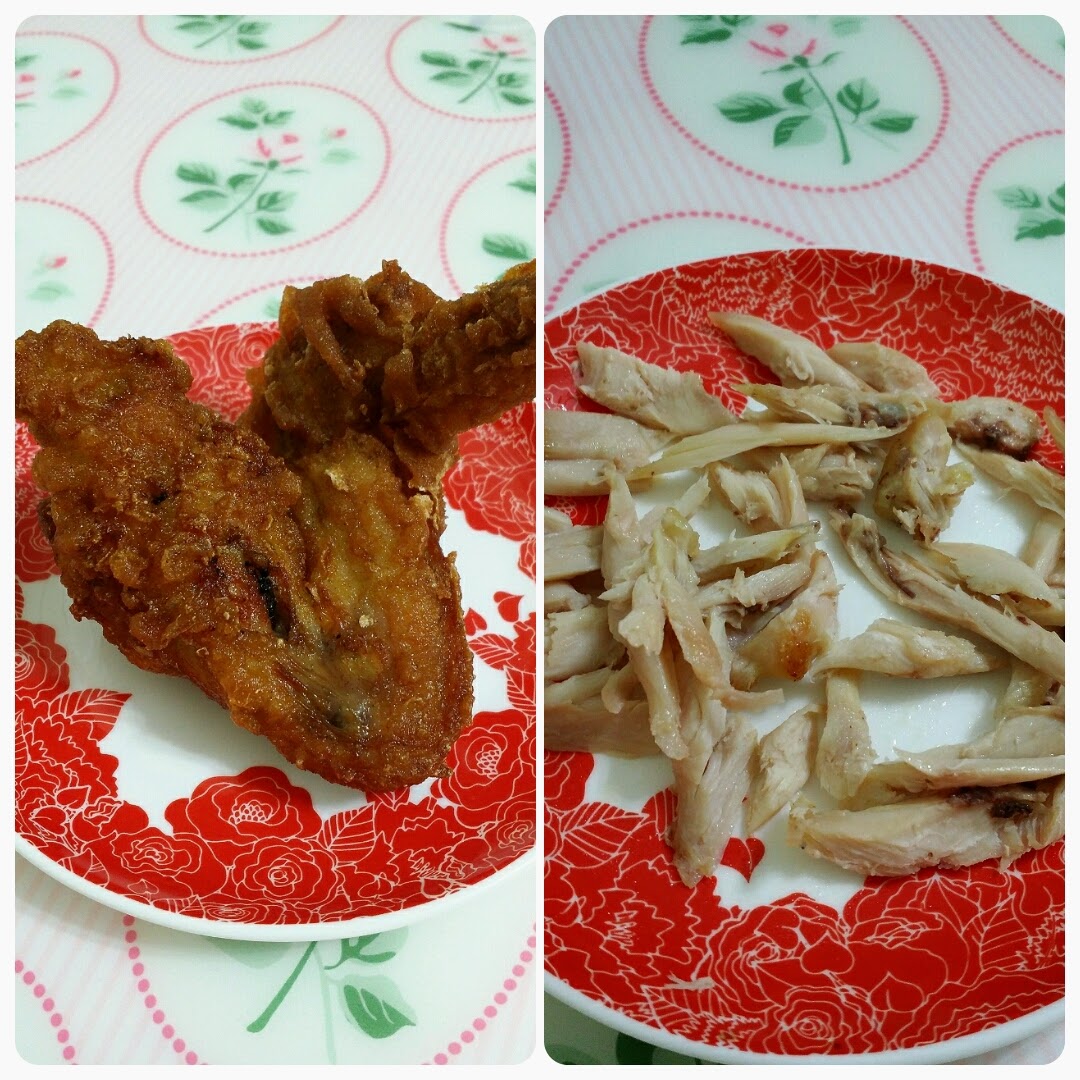 Bought wings home and decided at the last minute to cook Chicken Aglio Olio. So I ate all the fats (crispy skin) and shredded the chicken meat for my aglio olio. There is no doubt these wings are tasty but oily. Very popular in the canteen. Better than the one from Old Chang Kee. 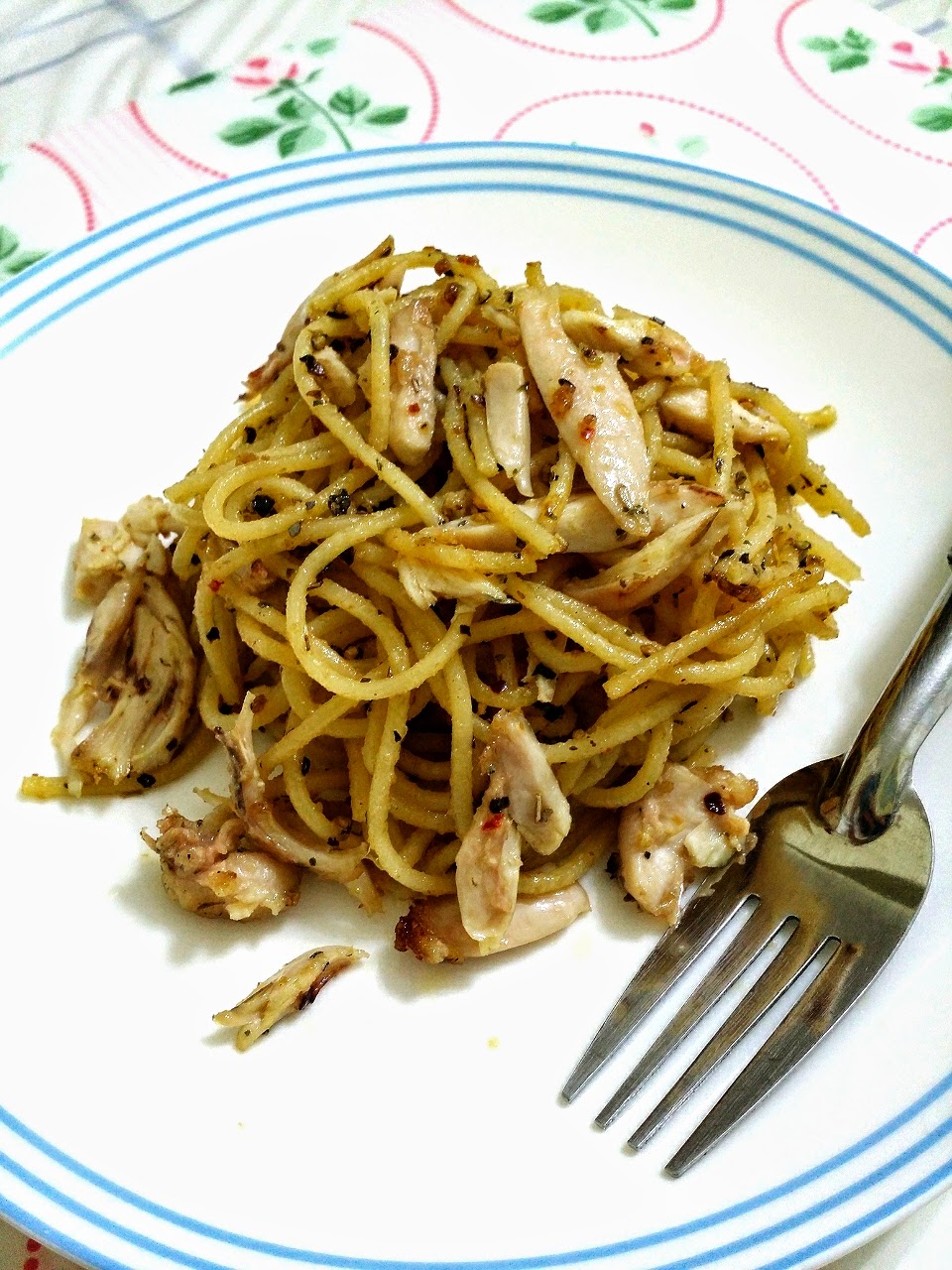 Everything seems to be controlled in this attempt except the salt part. Boo... I scare too salty because of the small portion of spaghetti so just a pinch. Alright. Next time I shall cook more spaghetti and probably should include the crispy skin to look better in presentation. 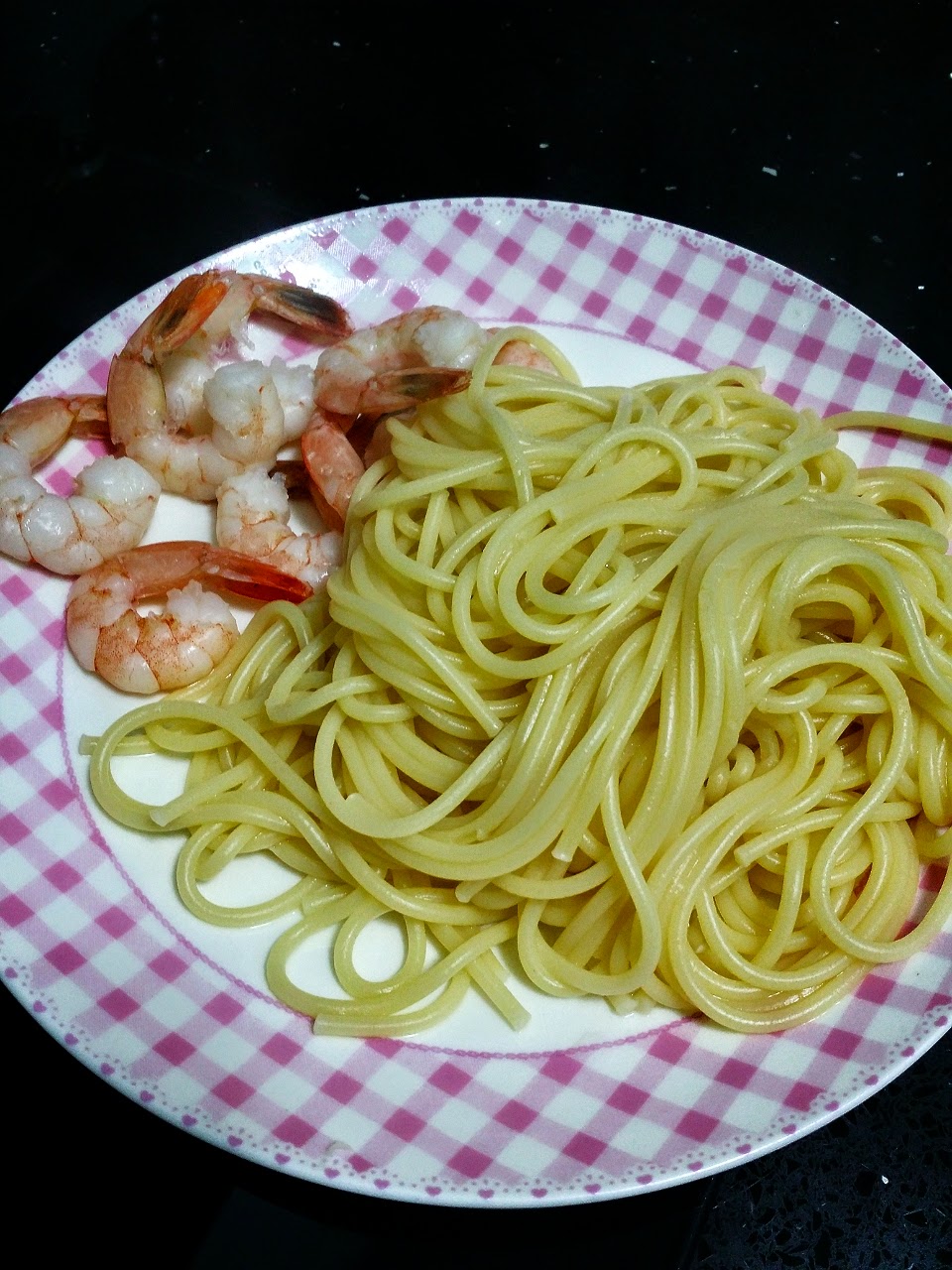 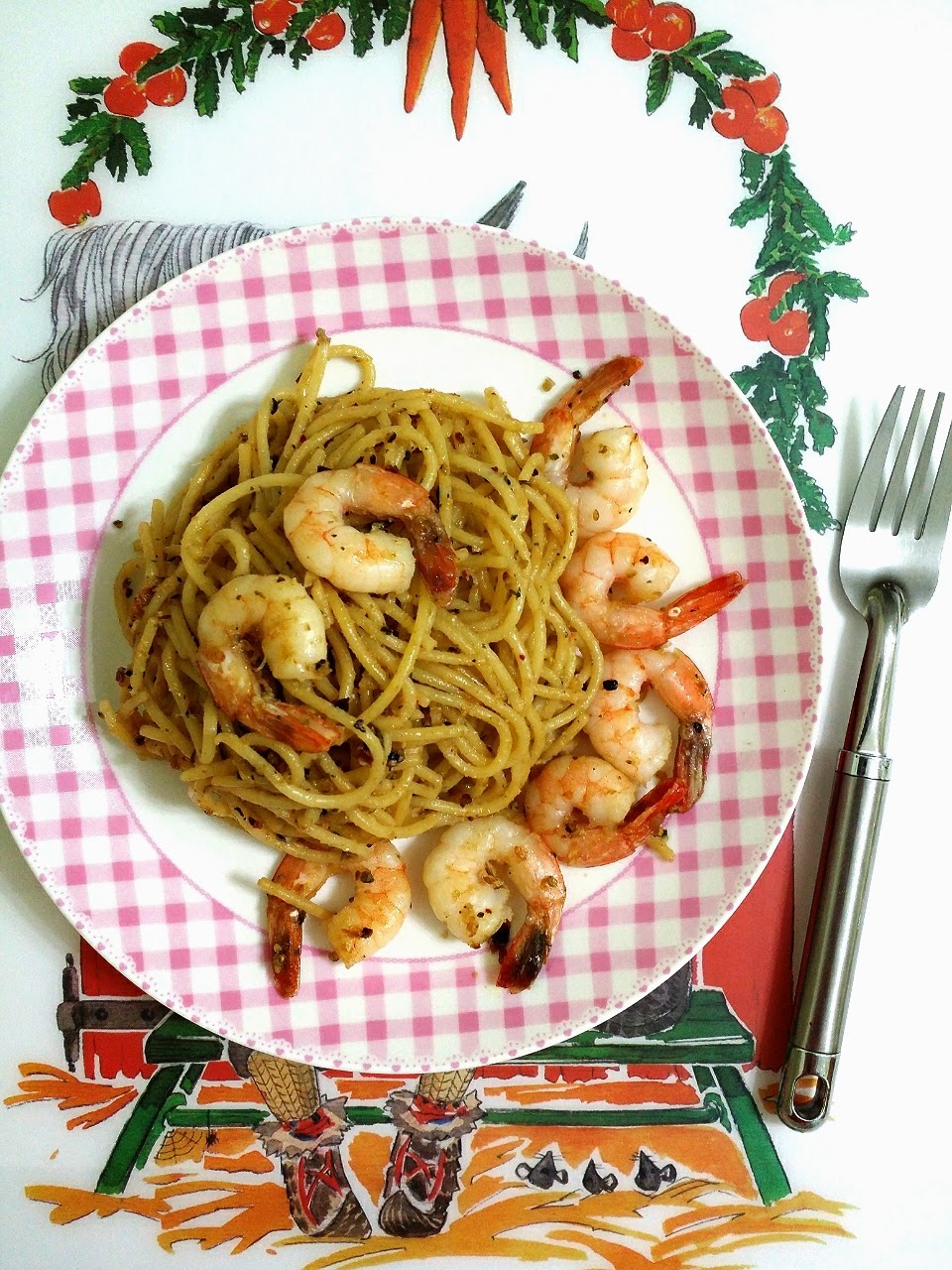 This attempt is pretty good. Husband said that the spaghetti are well done and no taste of that strong spaghetti smell. The meaning is the same as that fridge smell if you never defroze your food properly. The pack of prawns are brought down the day before like a form of defrozing and that I boil it with the spaghetti (as usual) for about 1 min up. Didn't want to overcook. I throw in the prawns to fry with the minced garlic first before throwing spaghetti in. Every step is the same except that I used black peppercorn (in replace of normal pepper powder) and garlic salt from MasterFoods (in replace of normal salt). It tastes perfect. Oh... remember. I put minced onion in. I don't really feel weird because it is so fragrance. Always the smell must be alluring, then the food taste come in 2nd. Quite satisfied. 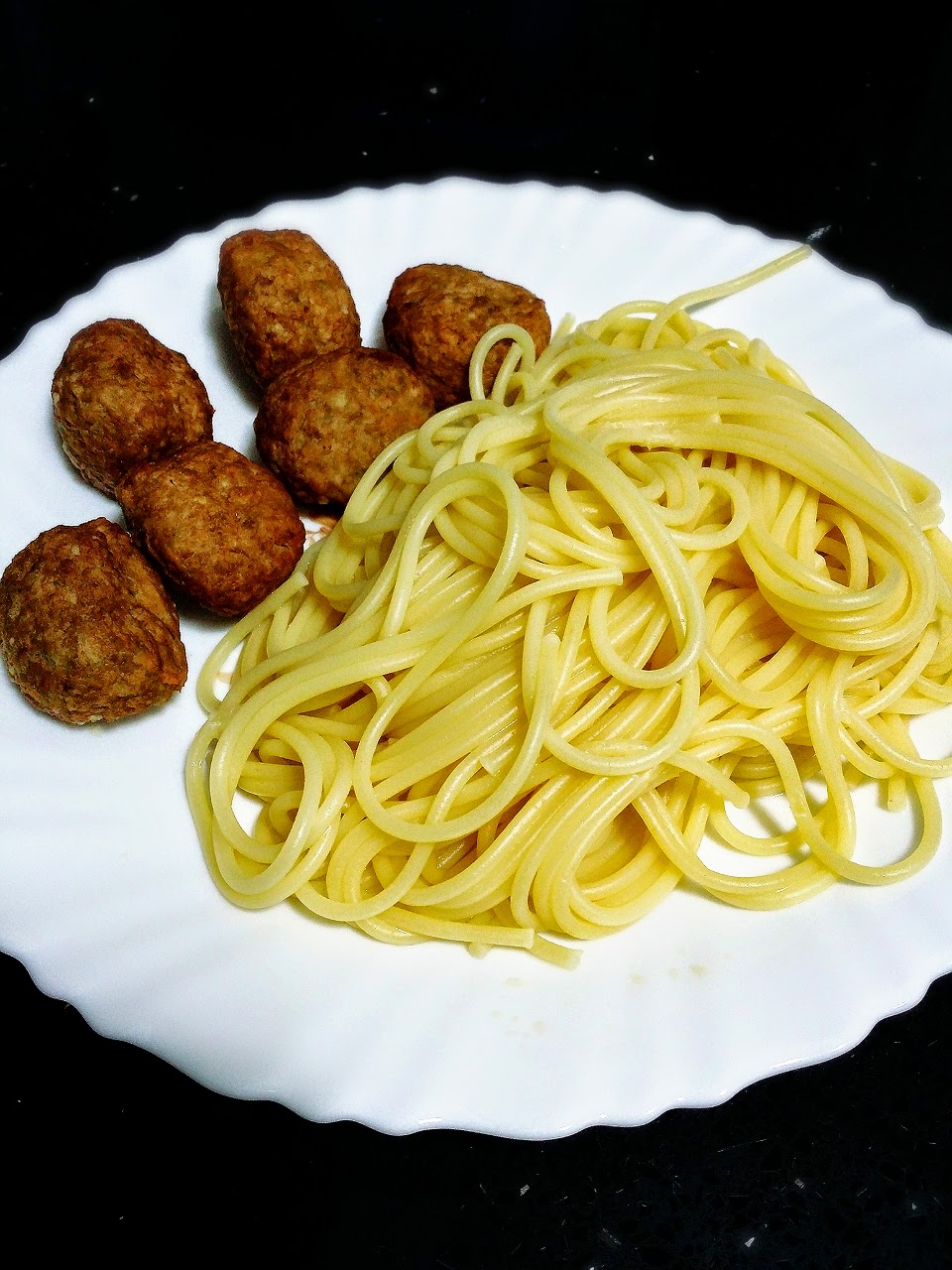 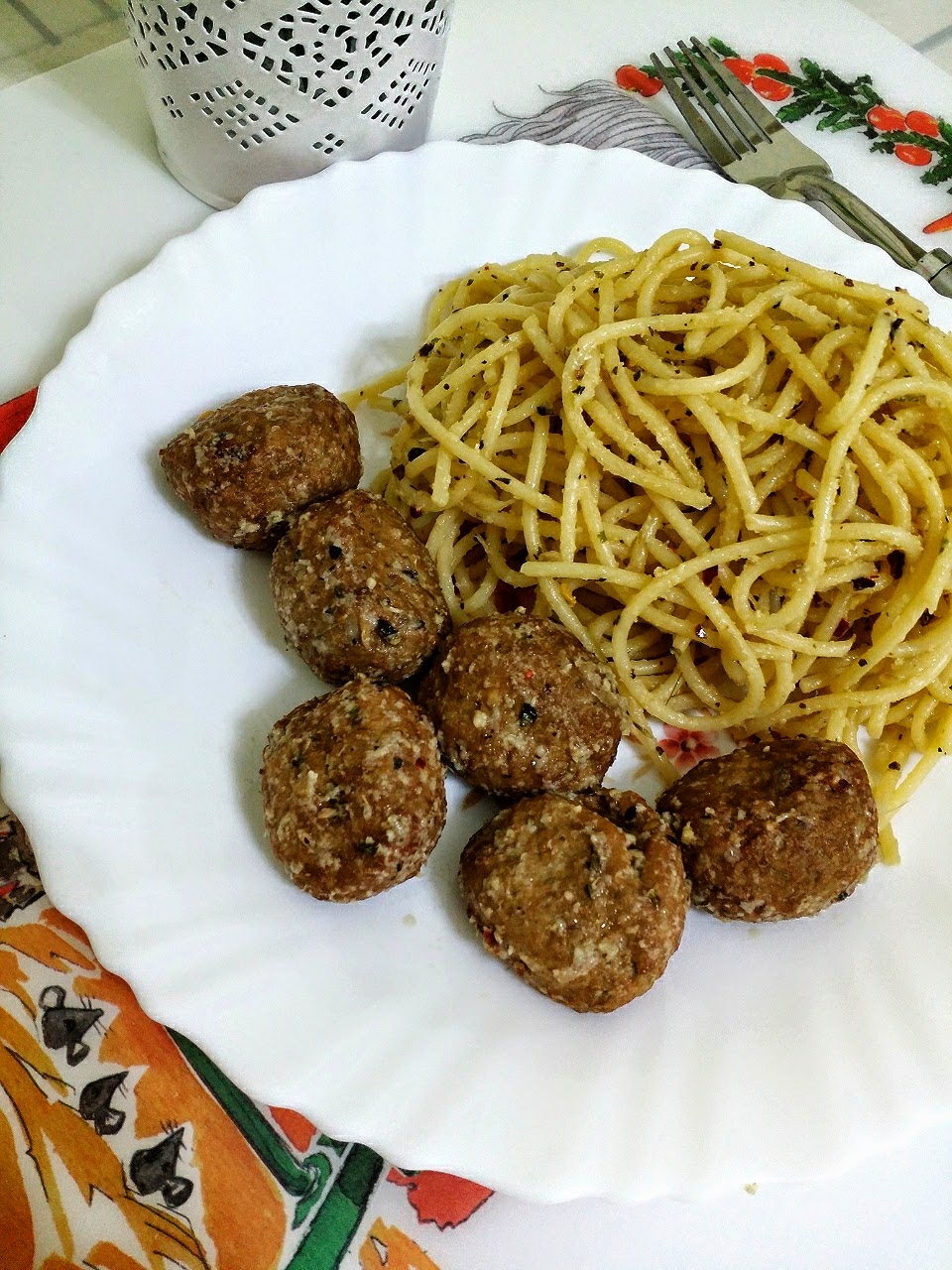 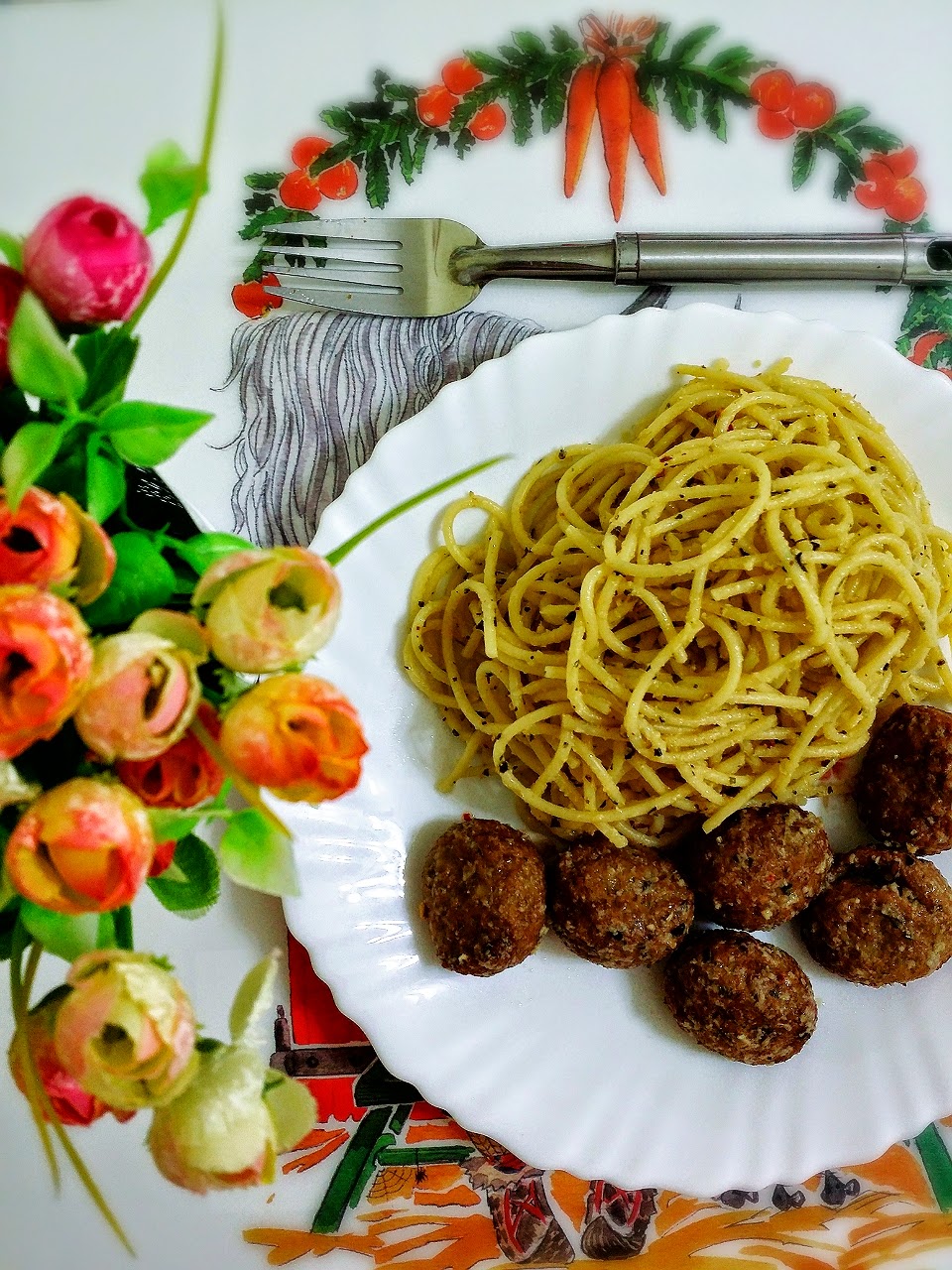 Airfry the IKEA meatballs for 5 mins at 180deg as a defroze process. Then while the spaghetti is boiling, I dropped the meatballs in to boil for probably a minute then set aside. To the husband, the taste is good but only if the spaghetti can be boiled a little longer! Woohoo....

So I have attempted those common ones you can have in restaurants and those I created my own like hashbrown aglio olio. So happy... I still have lots of ideas in mind which I shall not reveal but probably you peeps can stay tune to my Cooking Journal series. This post really take a month to 2 to complete because you can't be having aglio olio everyday right?

And now I don't need to have aglio olio when out for dinner (unless something special). Or probably if I have doubt on the real taste of aglio olio. Anyway I can do it and did quite a good job since the start of this trial and attempted many versions. Hard work do pays off, maybe one day. Try and try and never stop. Striking a balance in between.

So what I conclude is that it takes lots of practice to master something. If you have interest on something, do it and practice till perfection. Example I like photography and cooking. So I keep learning through attending workshops, going for events (if possible) and learning from the husband and my mum on cooking. Never give up. Now I hope to go for cooking classes (went for those CCs classes before). Still looking at appropriate ones. Any invites is appreciated. Do drop me a mail at iamstellachen@ymail.com.