Yes... we ladies decided to meet up yesterday before 2014 CNY comes to an end. And yes... last week we were still deciding which day to meet up via our group chat. So the majority wins! 12 Feb 2014. A Wednesday. Sounds cool to me. It reminds me of clubbing on Wednesday night because is Ladies Night! There are a total of 8 Dearies and 1 has to give it a miss. Sighz why is there always a missing one? Then on that day itself, 1 more has to give it a miss because tummy not well. Can't blame. Preggy woman. Wahahahaha... So end up only 6 of us, with 1 husband and 2 kids. Wow... We gathered at one of my Dearies' house. And she particularly loves ordering pizza. *frownz* Why yo? 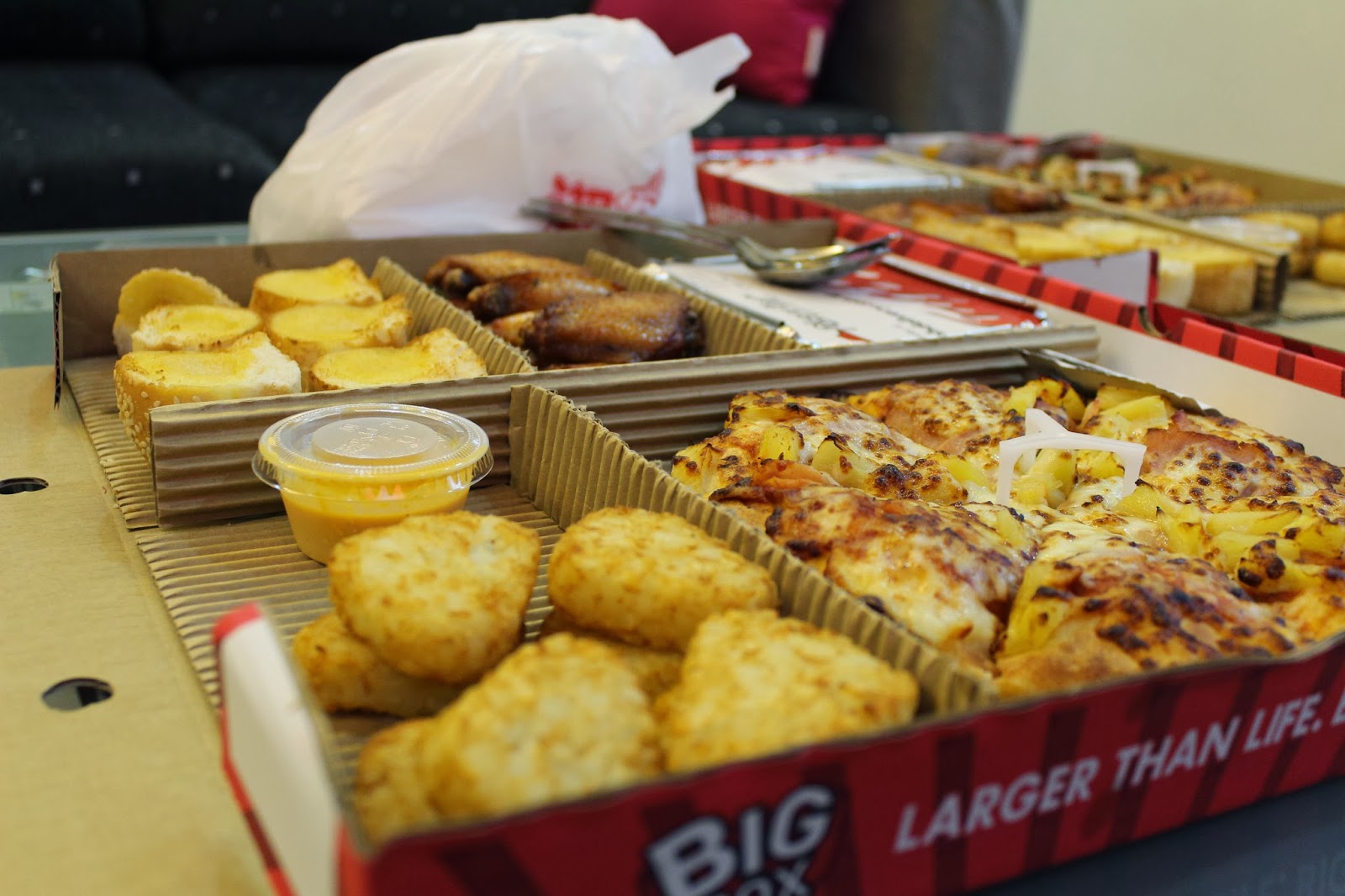 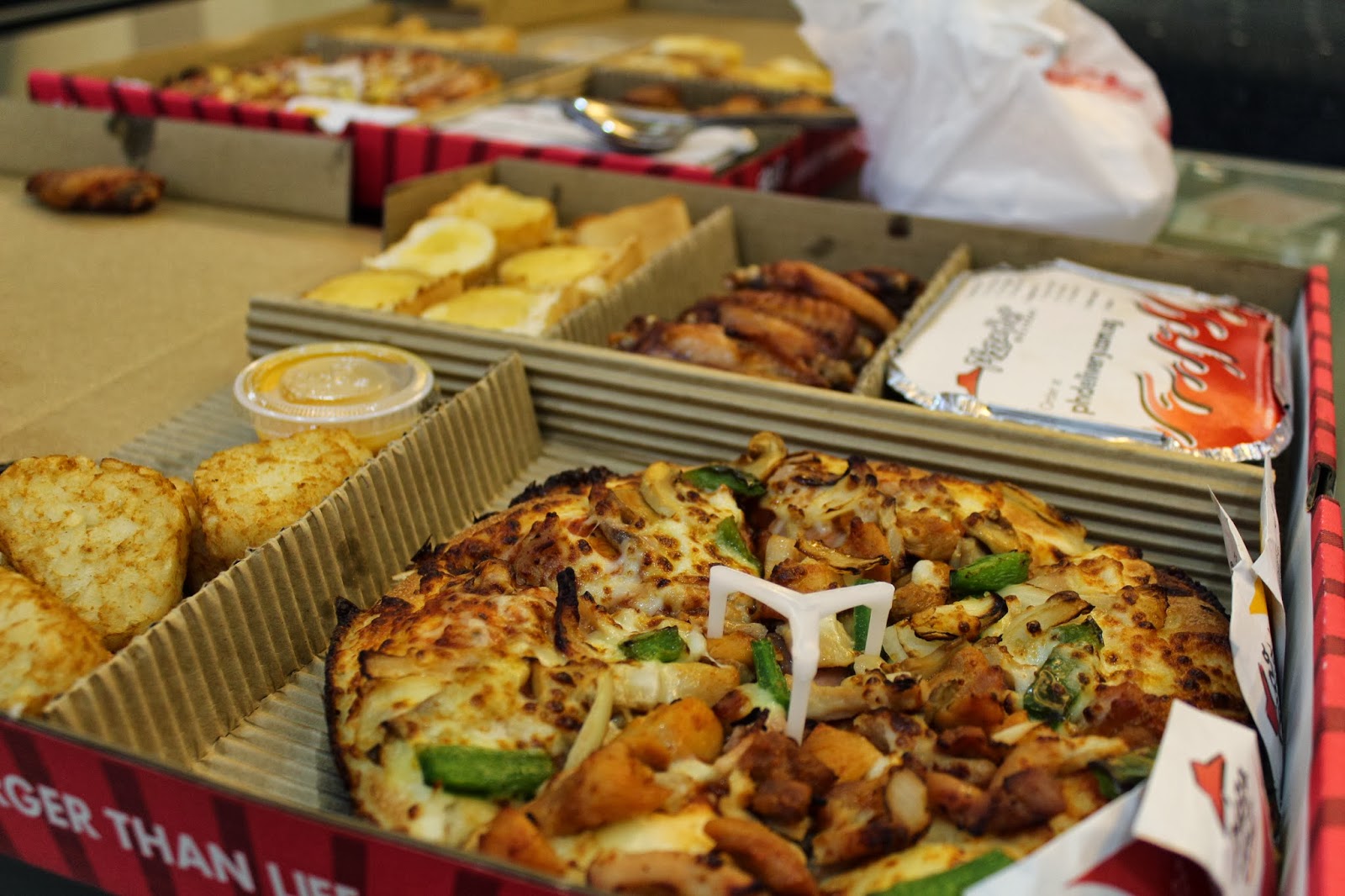 So we started off with 2 Big Box that contain a pizza, wings, hashbrowns, garlic bread and a baked pasta. You know I'm a fried food person so is easy to guess what I took first. 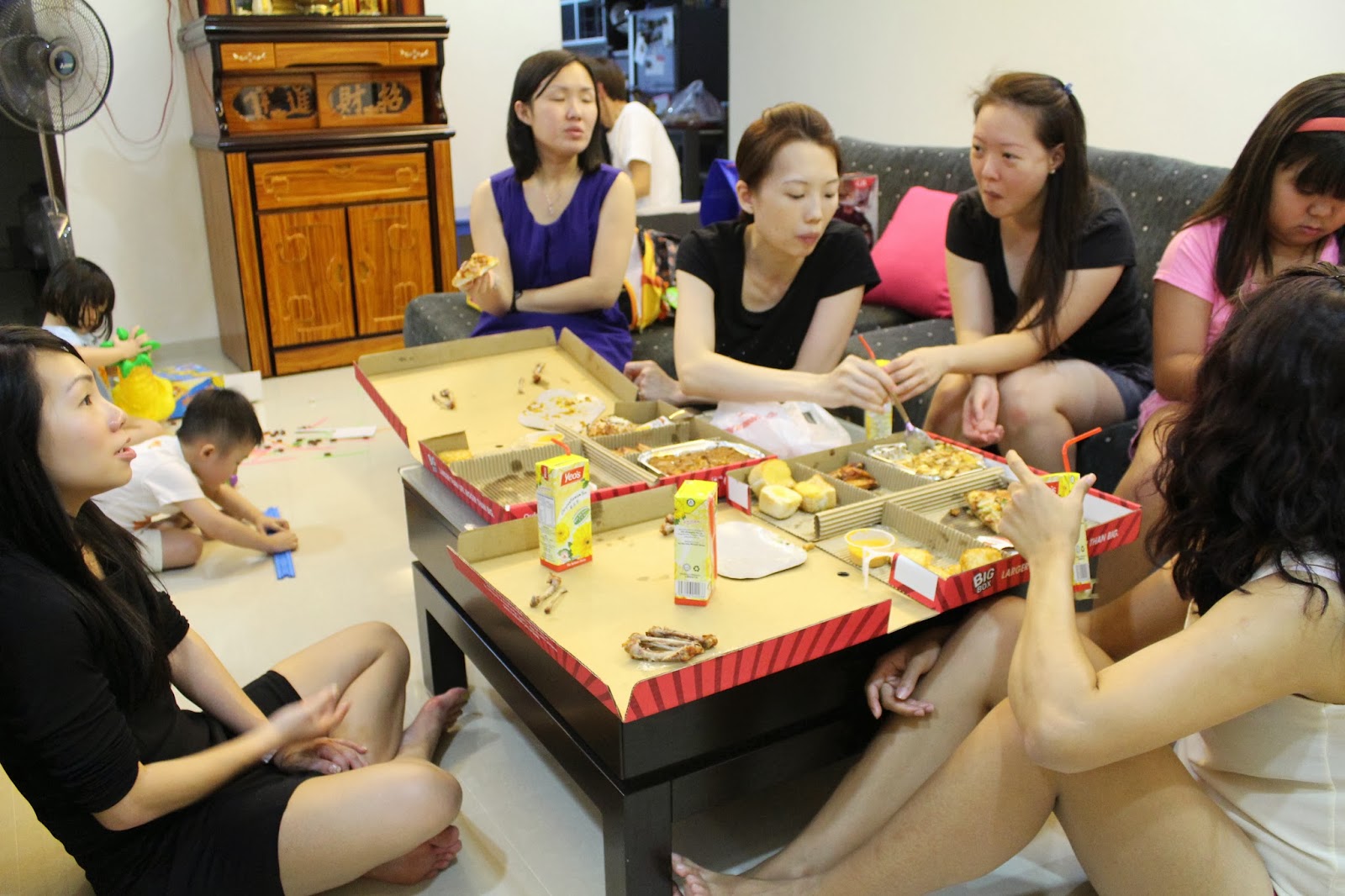 So we eat. And the kids are running around, shouting and screaming, playing with their toys while we eat and chat with the telly on. Excuse me. Actually I don't suggest to on that telly since is a gathering because we have awkward pause in between while we nom nom away. Suppose to chat right? 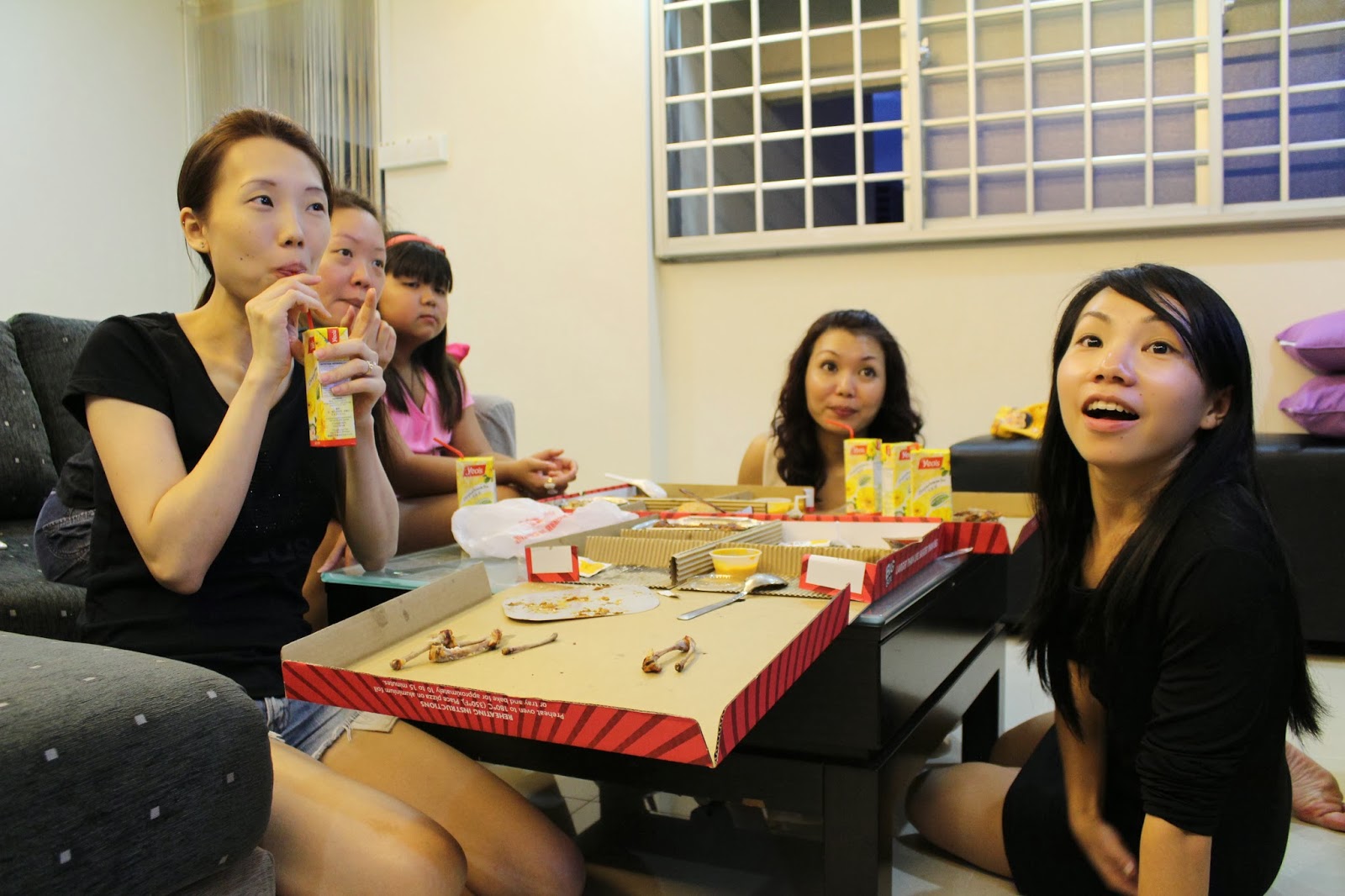 And we drink. Yes... No wine! Finally... Packet drinks is good enough. We are almost done with the food. I'm monkeying around with my friend's son. So superb lovable but notti and noisy. 2 Ns! 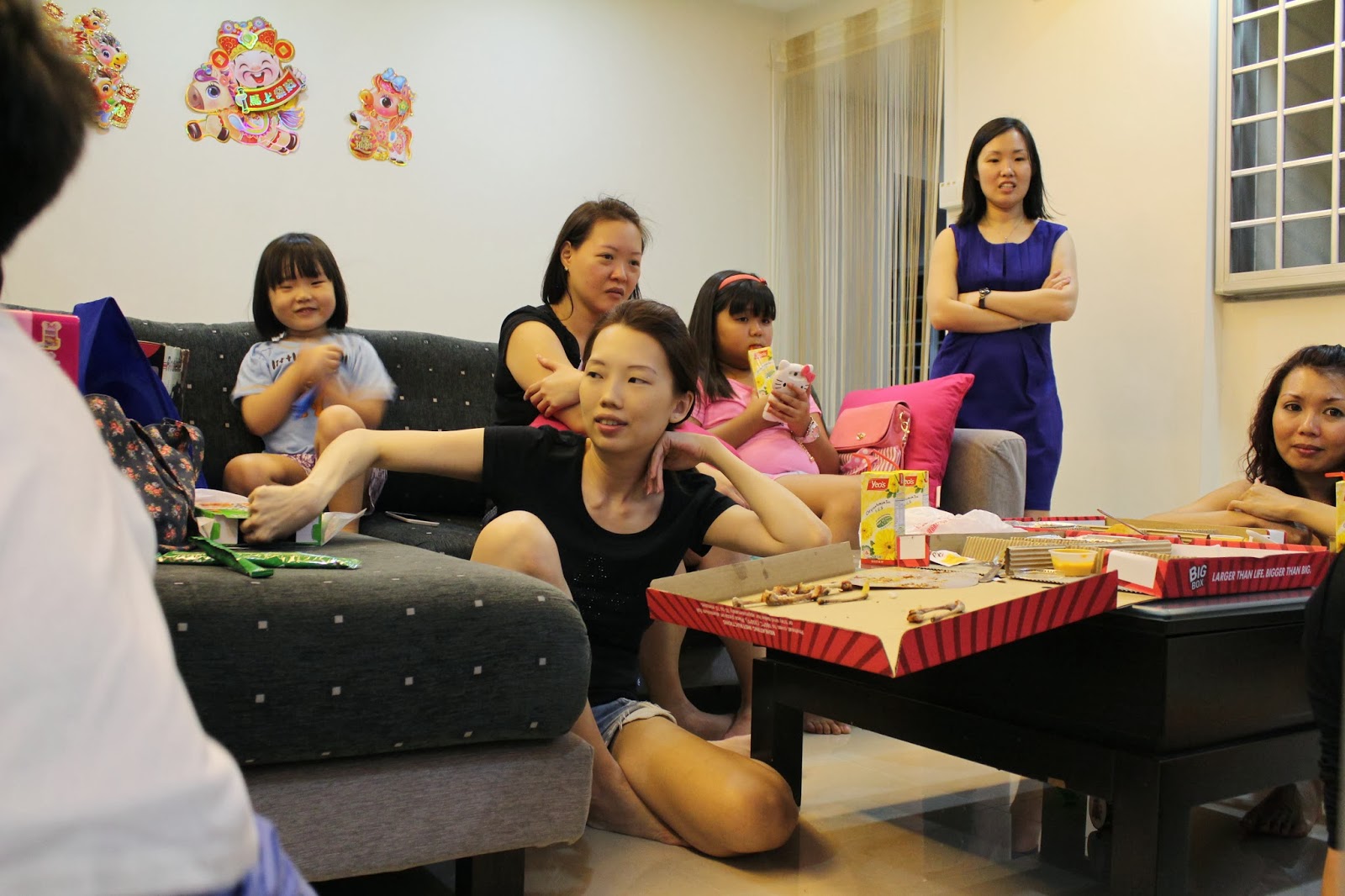 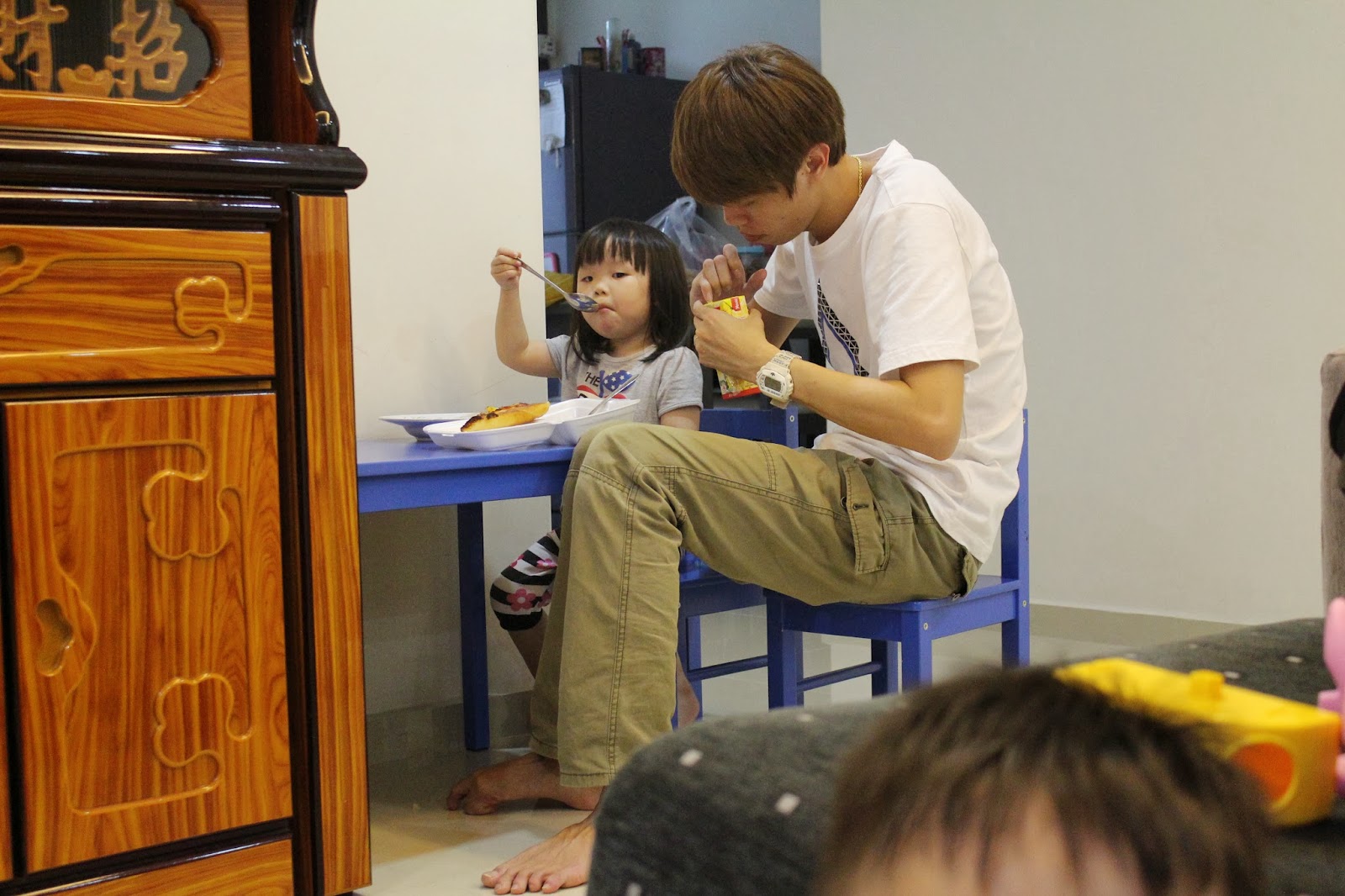 The father and dotter being 'ditched' at one corner of the house, enjoying some moments with.... DUCK RICE! So poor thing. The mum aka wife is enjoying away and the 2 of them seems so pitiful. Wahahahah... 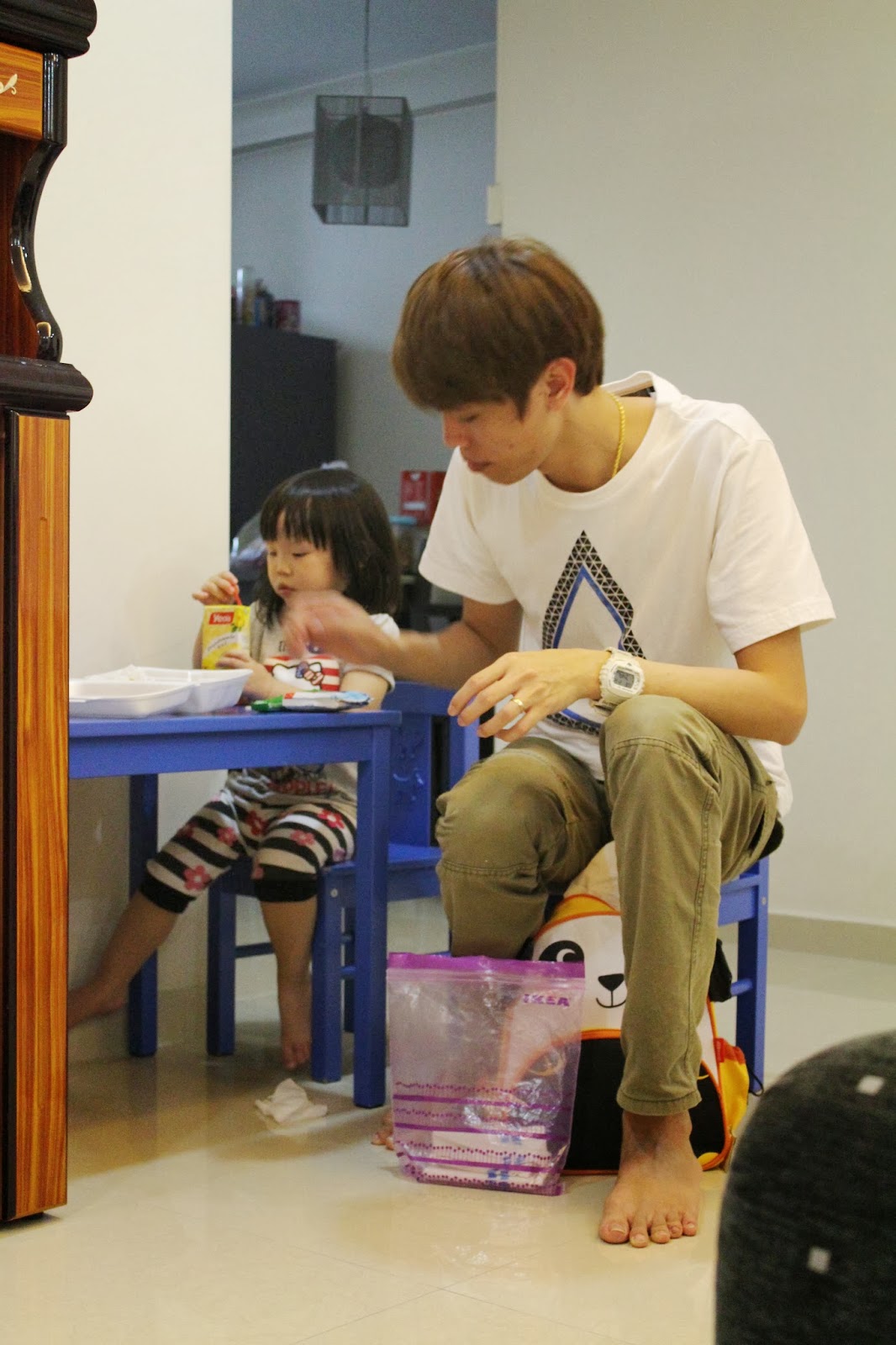 Haiz... Indeed he is a good husband. And the dotter is so reliance on him. Just disappear before her eyes and she started whining. But their dotter also quite cool. Or probably haven't warm up yet, seeing so many unfamiliar faces in the house.


Now the noisy bunch of kiddos. They are the ones that heat up the Wednesday night! With their screams and blabbering plus singing. 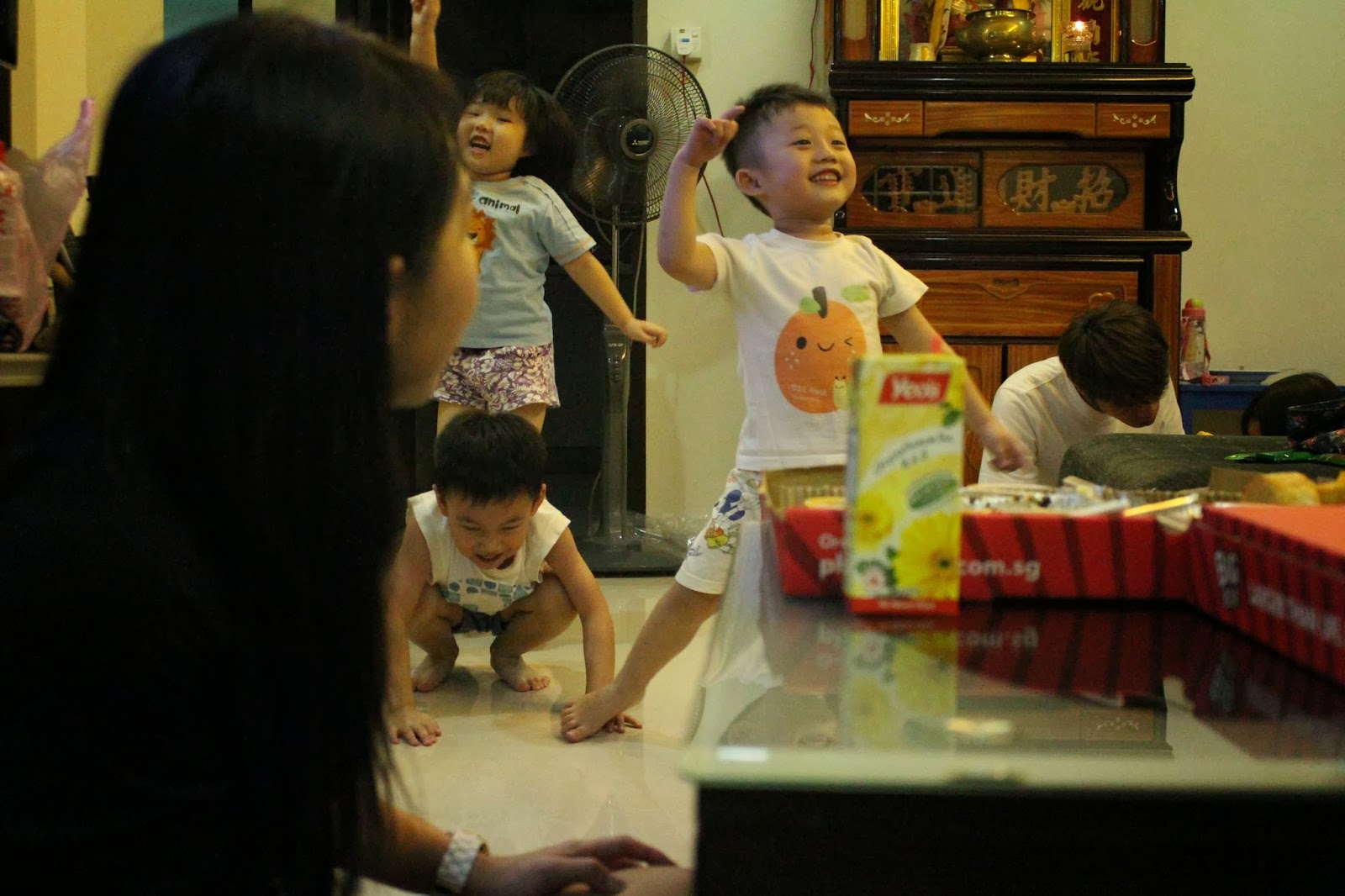 My friend's son is so superb duper hyper active. So lovable and cute! And most importantly, fast in warming up with unfamiliar faces around. Hmm... comparing him with my guy's nephew, I find him better because he can speak both Chinese and English. Okay... I always emphasize this because nowadays kids only know how to speak English because of their parents and I totally agree with my friend that both parents have to play their part in getting them ready for both languages altogether and not single it out. If I ever come across kids that tell me they don't know how to speak Chinese when they are Chinese, I will sarcastically say that 'You are not born a Caucasian in the first place. You are born a Chinese which that blood flowing through you!' For me in future if I have kids, I will play my part in Chinese or English and my husband in English or Malay. Cantonese, I leave it to my parents. Next. 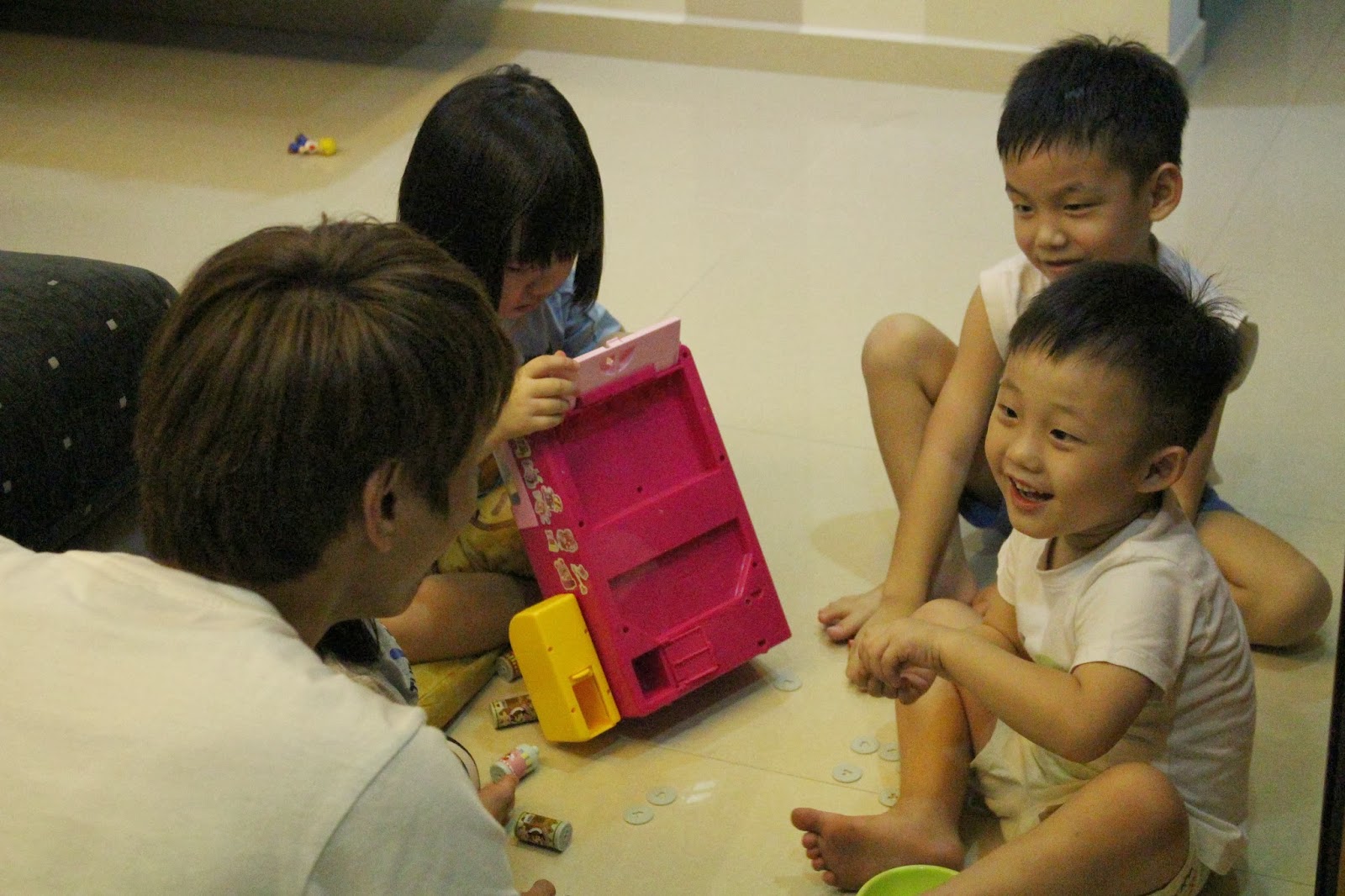 Ya... This woman very pointy ar! I bought a pack of Pocky in melon flavour for everyone. I think is nice because I tried 2 thick sticks. Yummy! I just love Japanese stuff. 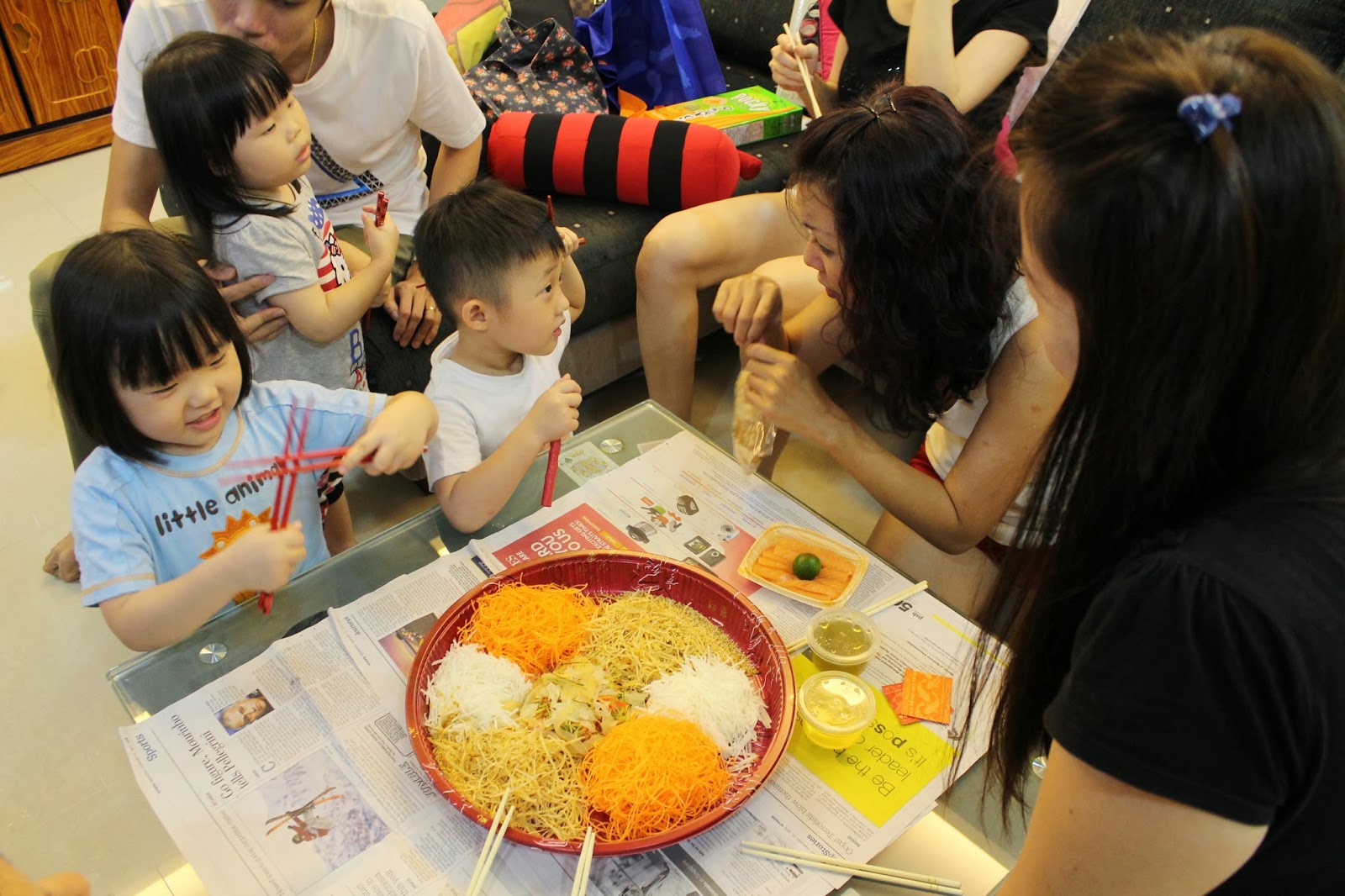 Time for yusheng. One of my friend bought it from Crystal Jade, I think. And the kiddos are quite excited over it. I don't know why. Probably because they can play around... with food using chopsticks. Wahahahaha... Usually, tossing yusheng is a messy affair. Seriously. You can never have your table clean without a trace of yusheng ingredients on it. So we placed newspaper below due to our experience. This is my 3rd yusheng this Lunar New Year. 2nd time at my guy's place. 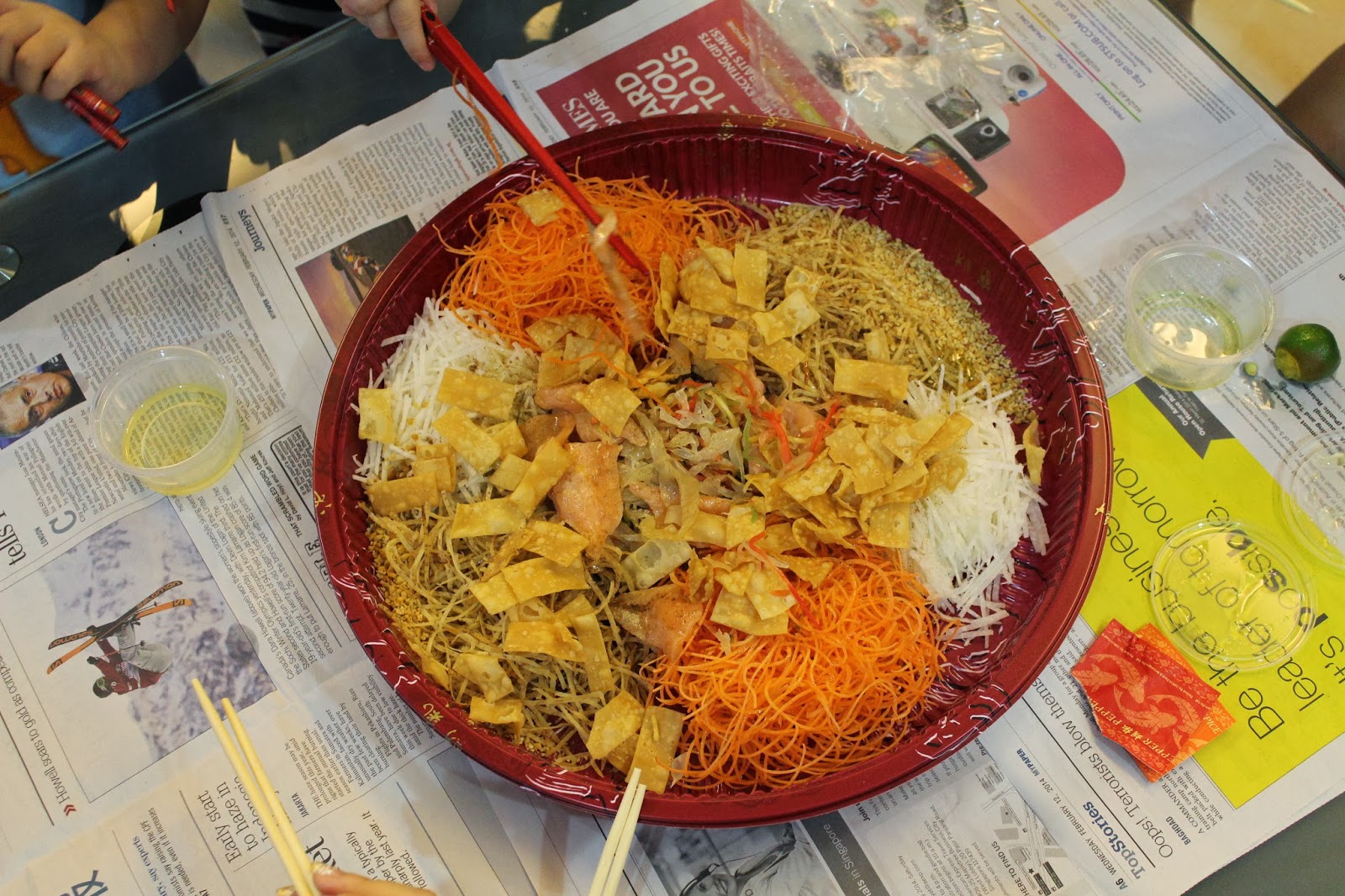 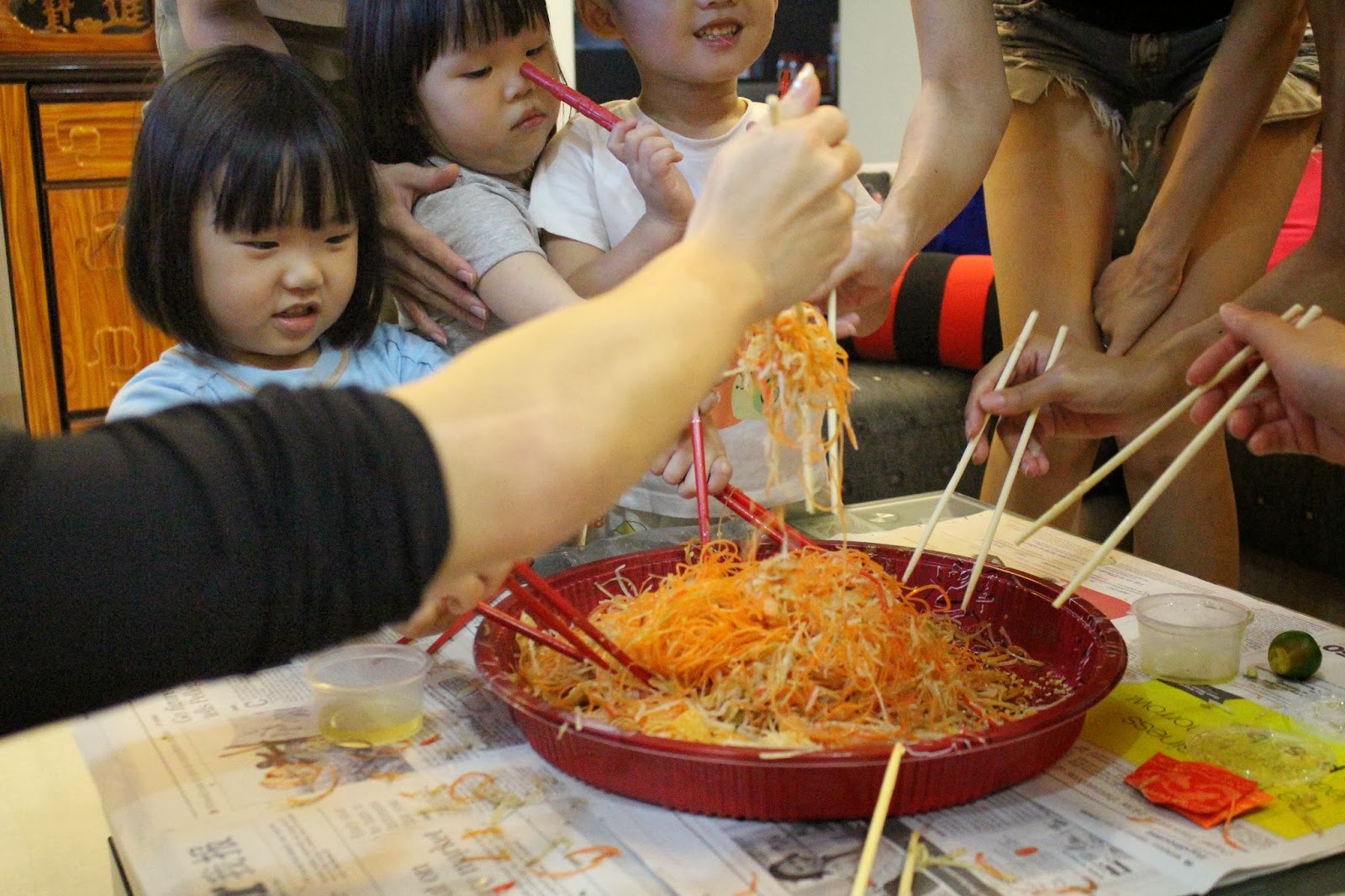 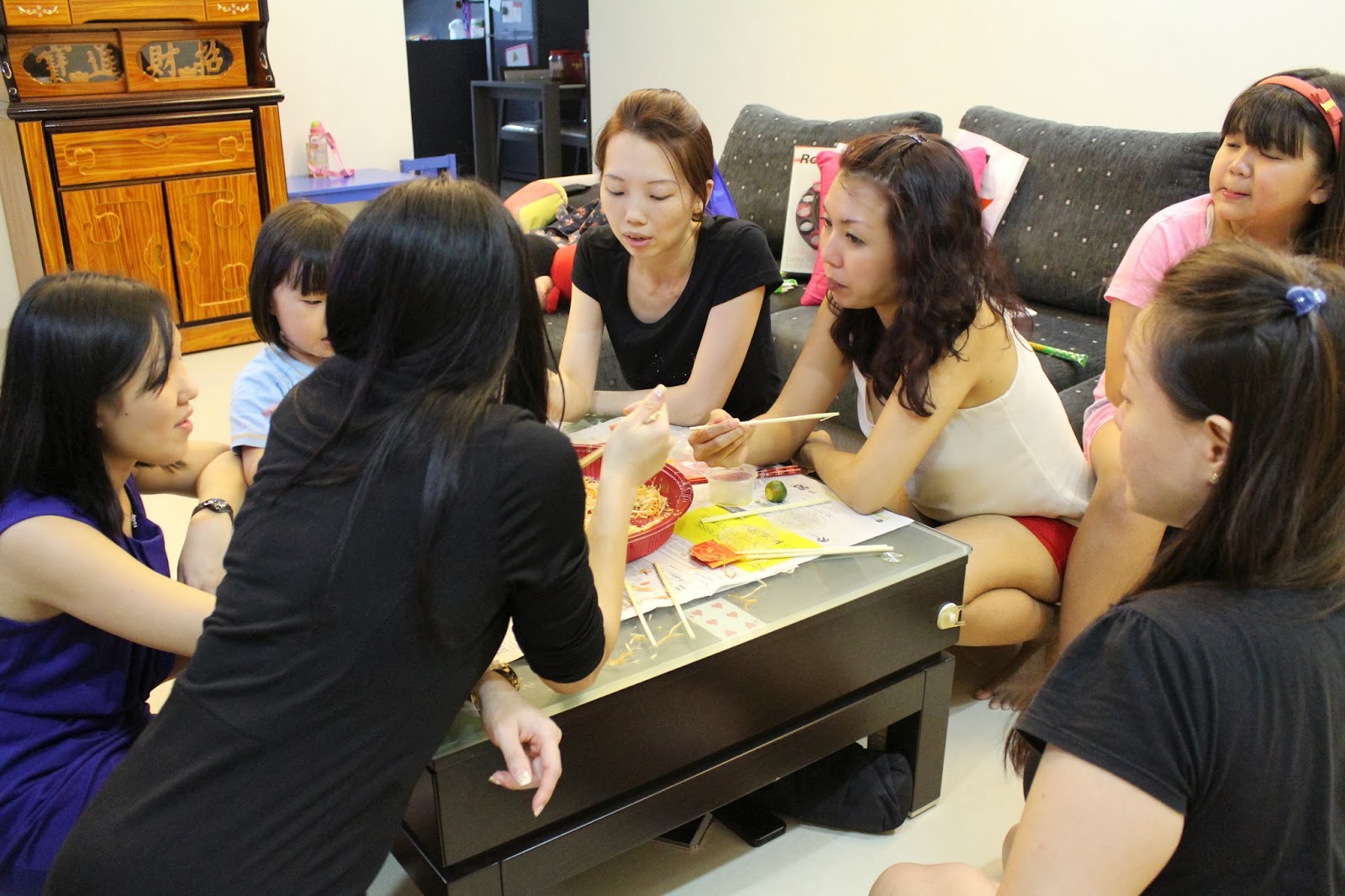 So we end the night with group pic as usual. SOP yo! 3 takes. Take 1 blurred. Only Take 2 and 3 are accepted. At least by me the photographer. 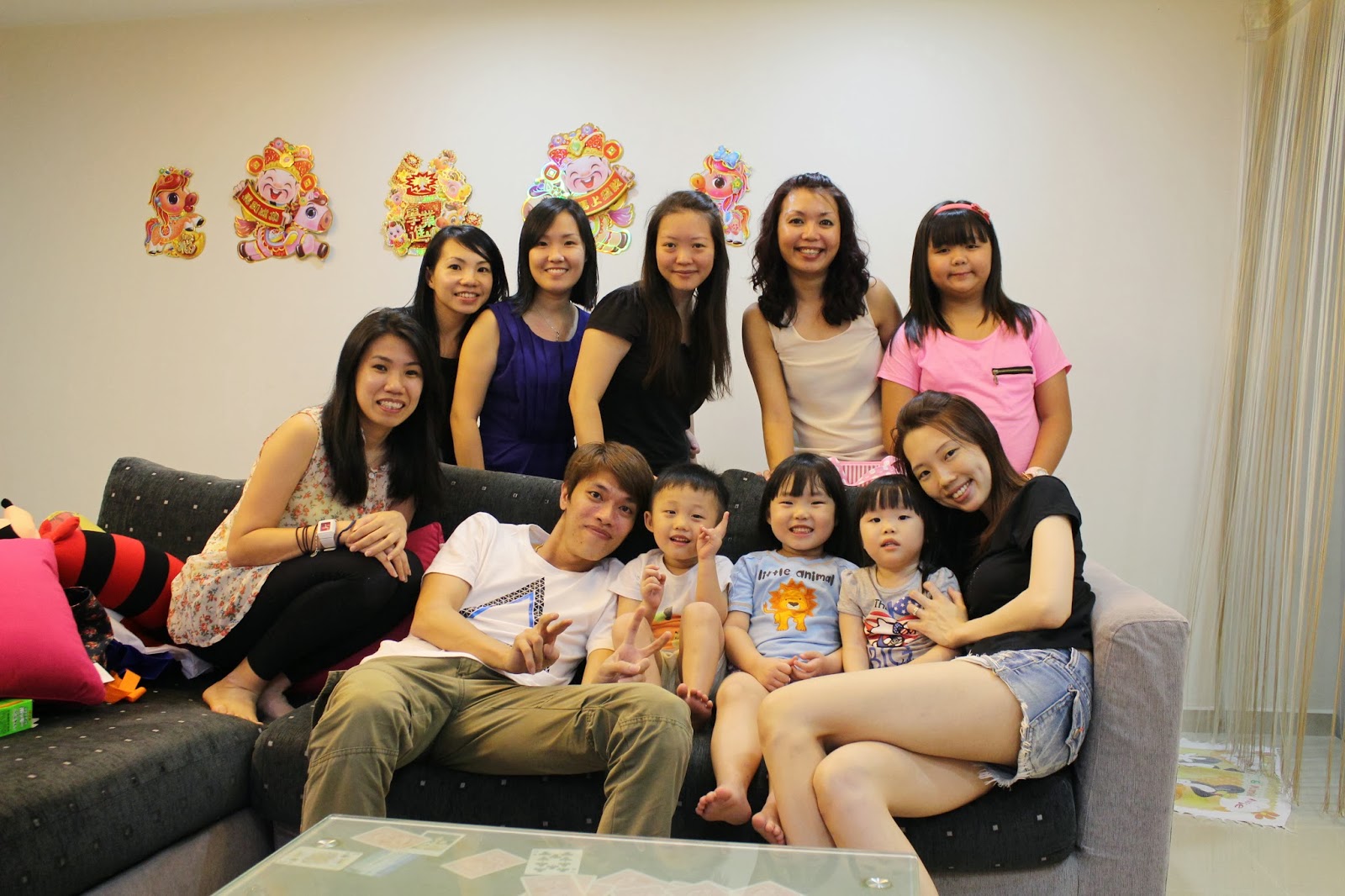 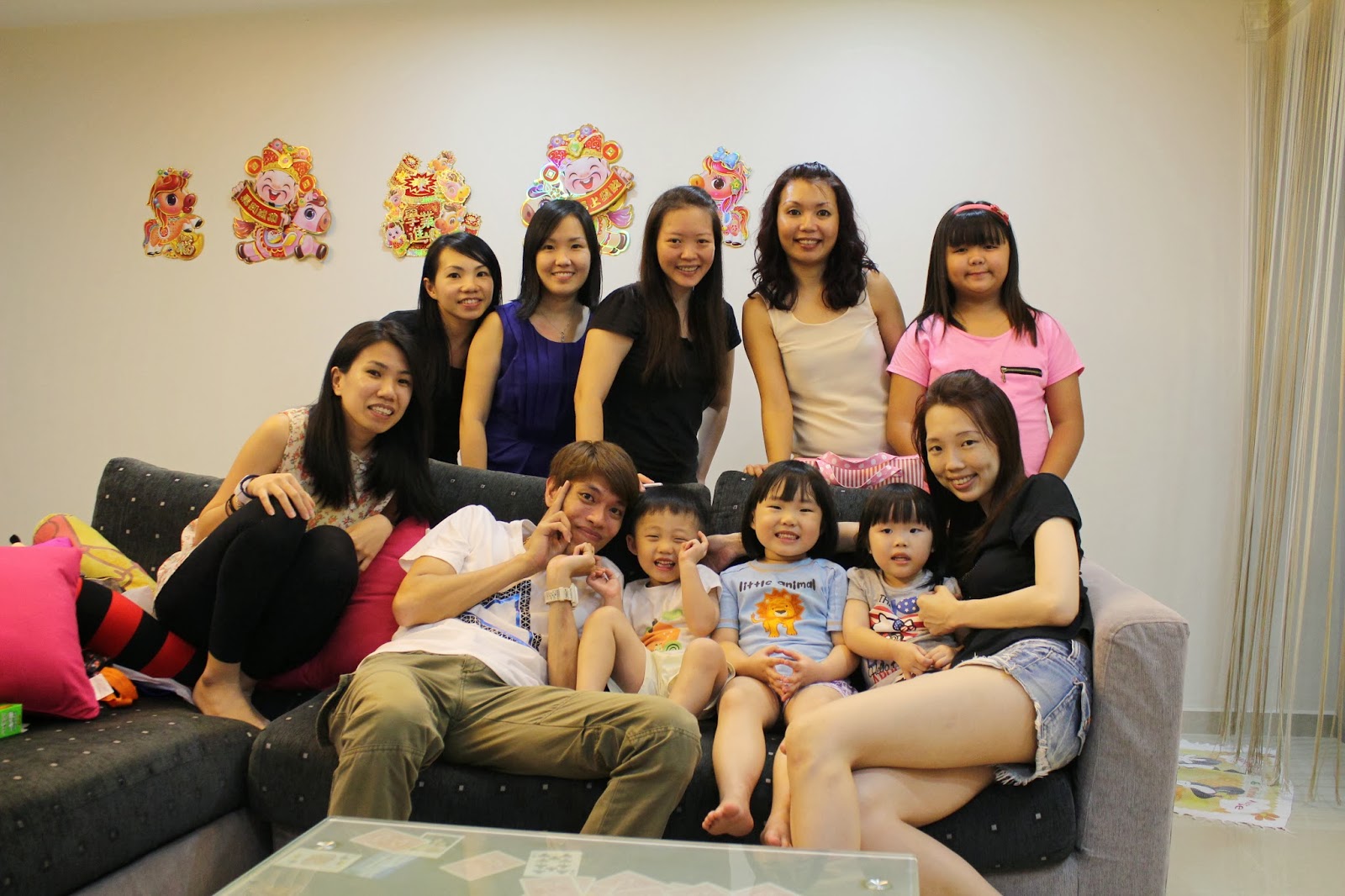 After that before going off, the women (except me) go around giving ang bao to the kiddos.

That's all. Our gathering ended at 9+ near 10pm. Great! I go home very fast one. But next year onwards or probably from this year July onwards, I have to head home to Yishun instead. Wahahahahah... But I can't wait for my house to come rather than my wedding. Because I am my own designer for the house.

They asked me if I'm excited/nervous about my wedding shoot next Sat. I mean what is there to be excited about when is not outdoor but just indoor. Ya excited as in I made my own props to enhance the photos. My own hand-made props. Not my photoshoot. I'm so scared of it. Because I don't know how to smile and I scare of ruining the photos. My guy has a nice smile so problem is on me. Plus I scare my menses come on that day and ruin my mood!!!! FARK! Tell me what am I suppose to be excited about! All excitement is on my new home. Not this stupid wedding shoot plus wedding! Is not going as what I want because I want photoshoot by myself but it seems impossible because I'm not skilled enough. And I don't have a studio of my own. Hate! So the small little thing that I can do is take wedding bands photoshoot. Nice or not, you decide. But so long as my groom likes my photoshoot (because he is not that creative), it doesn't matter how others think. Fark! It seems like a nerve-wrecking thing too. I feel it now.