My guy has this passion on Mixed Martial Arts (MMA) for years and one of his birthday (think few years back), I bought him a boxing gloves to allow this passion to continue. He loves it. Although his room is too small to contain a boxing sand bag but in future, our house will have. He knew a lot about MMA and loved watching Youtube clips on MMA, looking at their moves and techniques.

And then 3 Saturdays back, his friend got tickets to watch UFC Fight Night Singapore at Marina Bay Sands. So we went, bringing all the excitement of watching it live for the first time for both of us! Our seats were just in front of that octagon ring. What the fark! But it is like so close yet so far. Stil a gap away but way beta than those behind us right?

For the first time, I saw the 2 pretty Octagon ring girls. So many 'lechers' wanna take photos with them. Wahahahahh... Okay fine. Those men drooling over their pretty face and boobs. Hahaha... Enough! Show you peeps some shots I took that night. 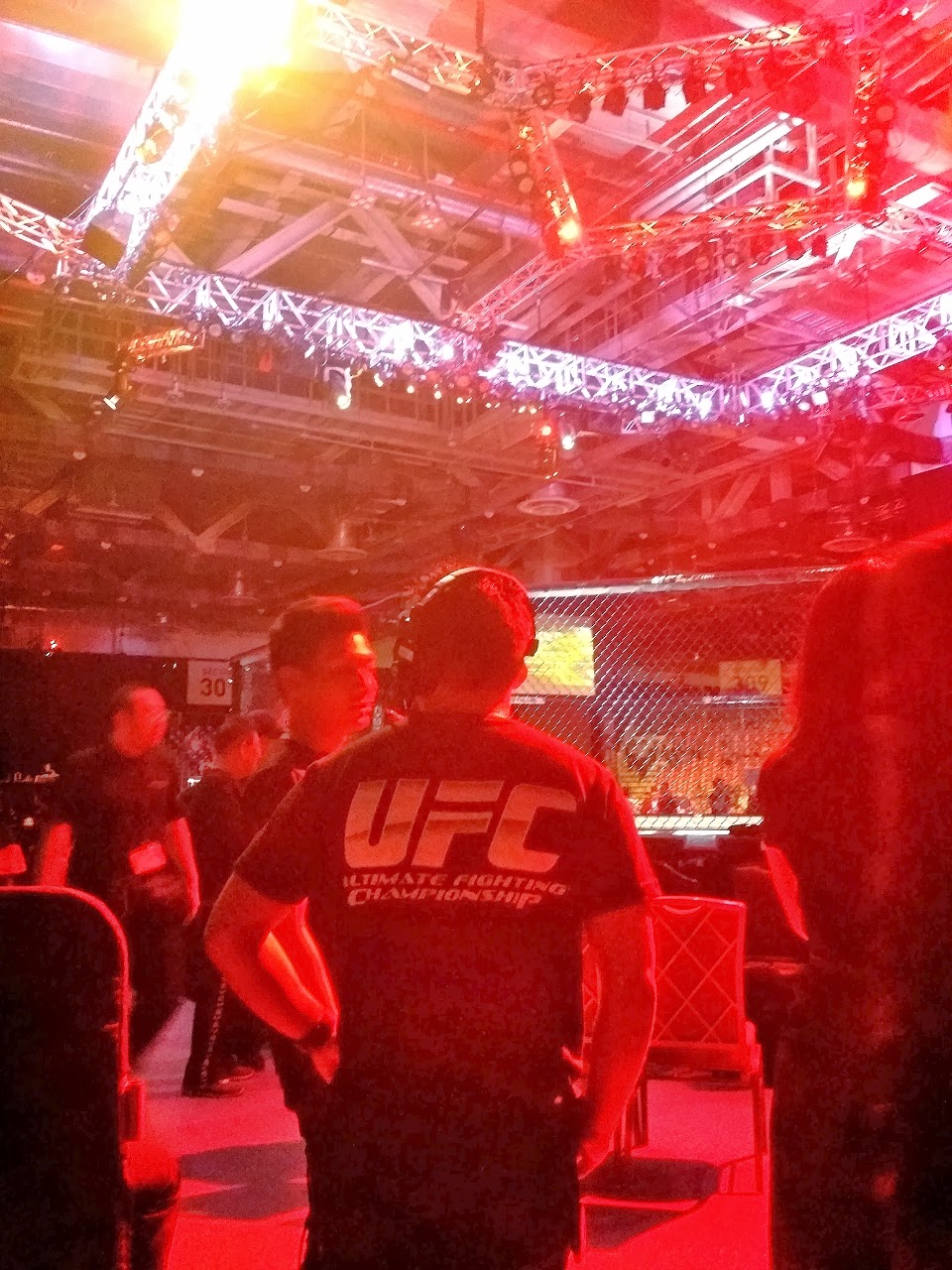 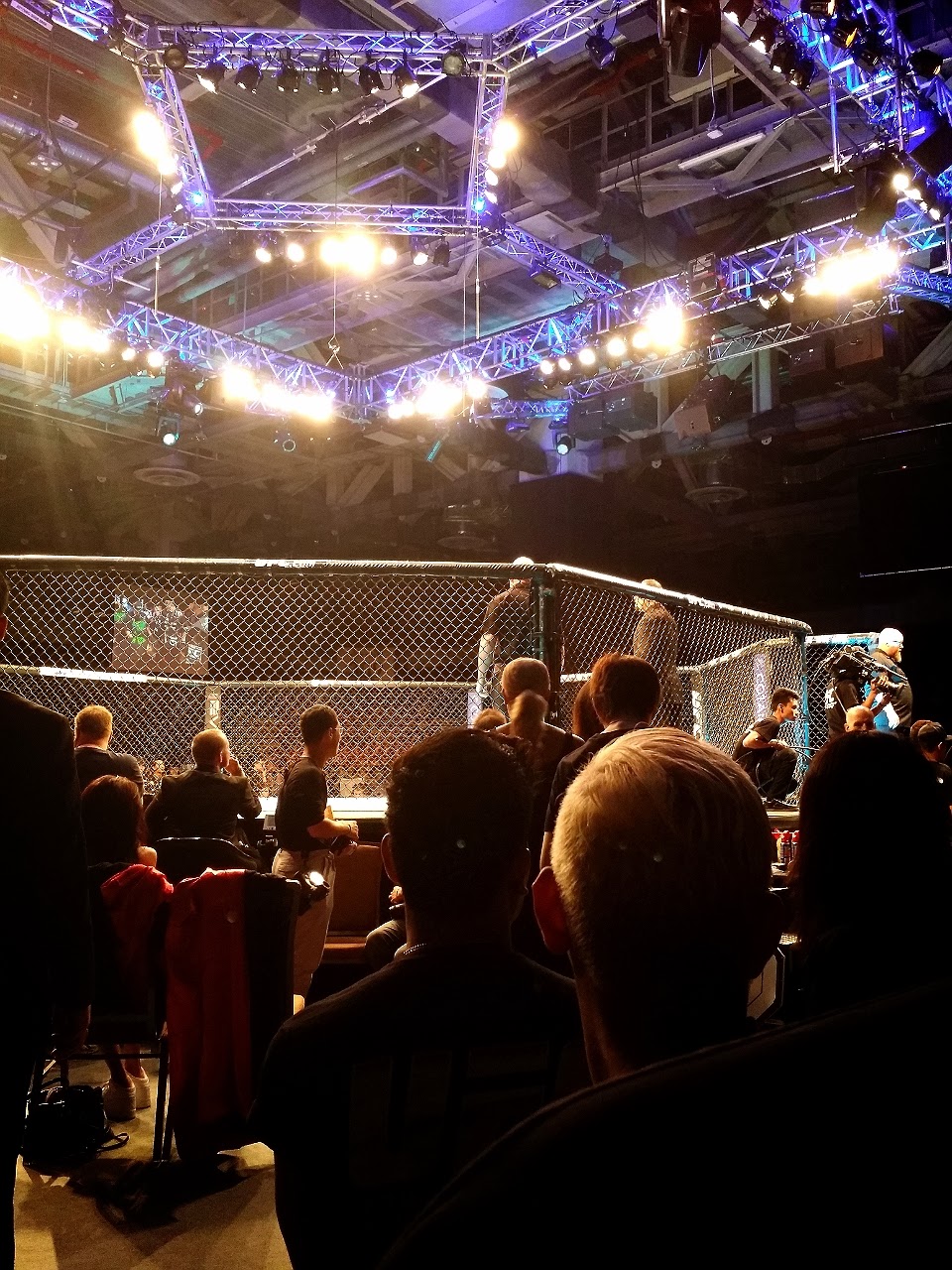 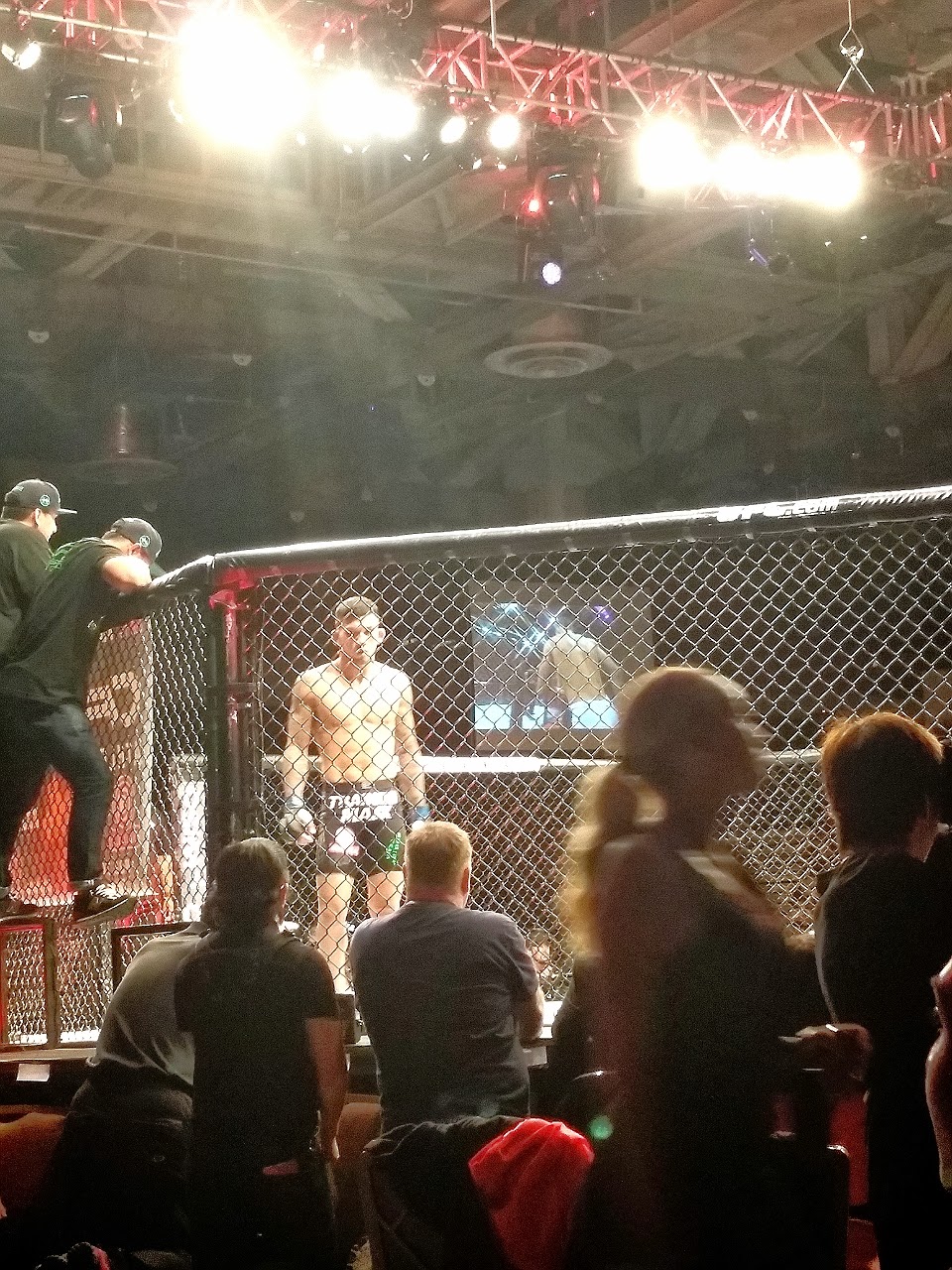 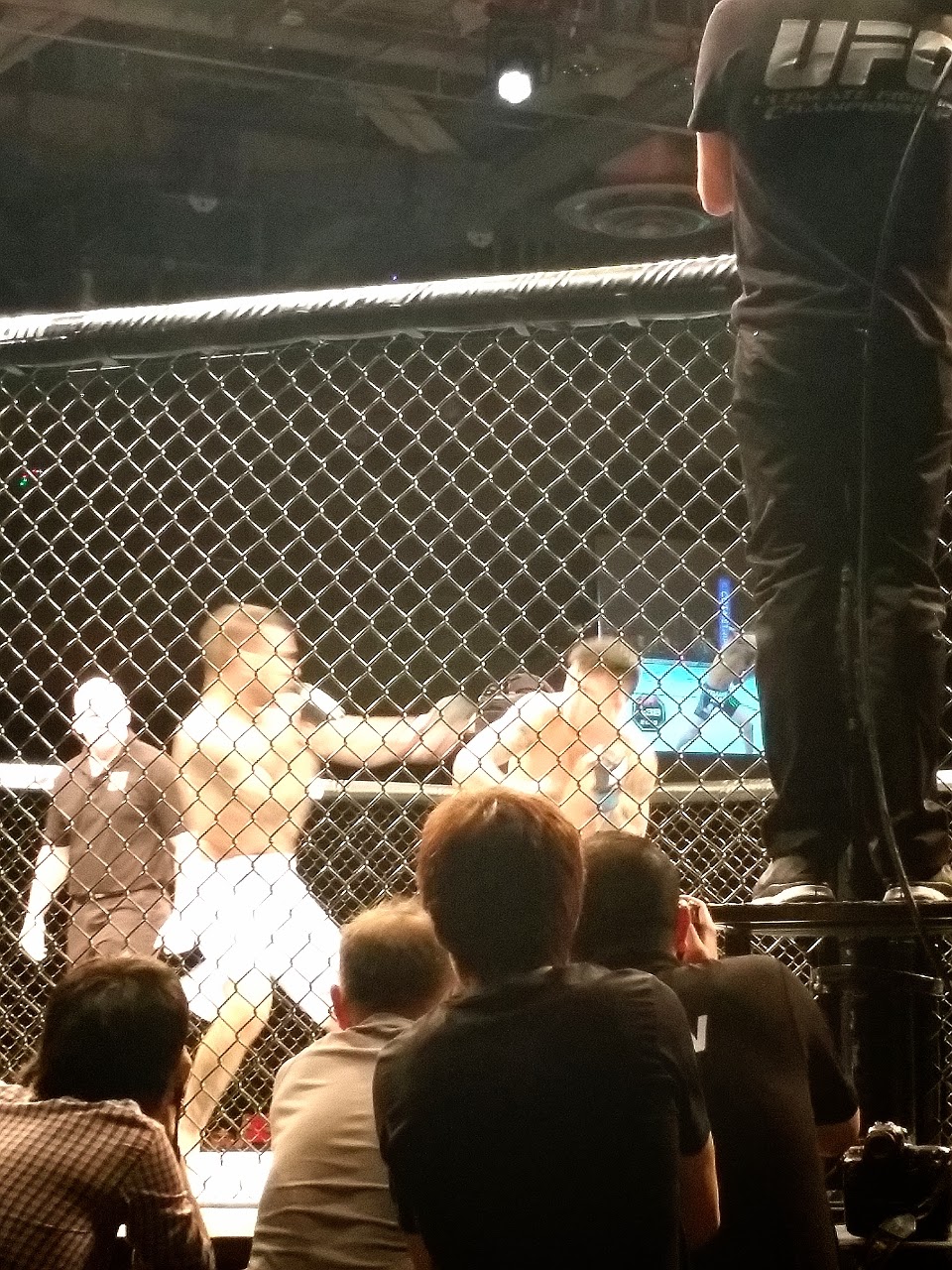 All these MMA fighters have different background. Either they are trained in Muay Thai, Boxing or whatever. And their matches come in different weight class like Welterweight, Featherweight, Bantamweight or Lightweight. I don't know how they class them and I just know there is all these existence. Very deep and profound. As for Singapore, it is represented by Royston Wee under Bantamweight. He won that night and was his debut in UFC (if I'm not wrong). Good job!

Anyway, it is like a must to have pretty faces at these type of events. Nothing uncommon. I don't expect guys not to turn their heads to look and drool at them, even for my guy. Wahahahaha... Let him see and drool. I even asked if he wants to take a photo with the 2 Octagon Ring Girls but he don't want. KNN! Shy is it? Hahahaha... 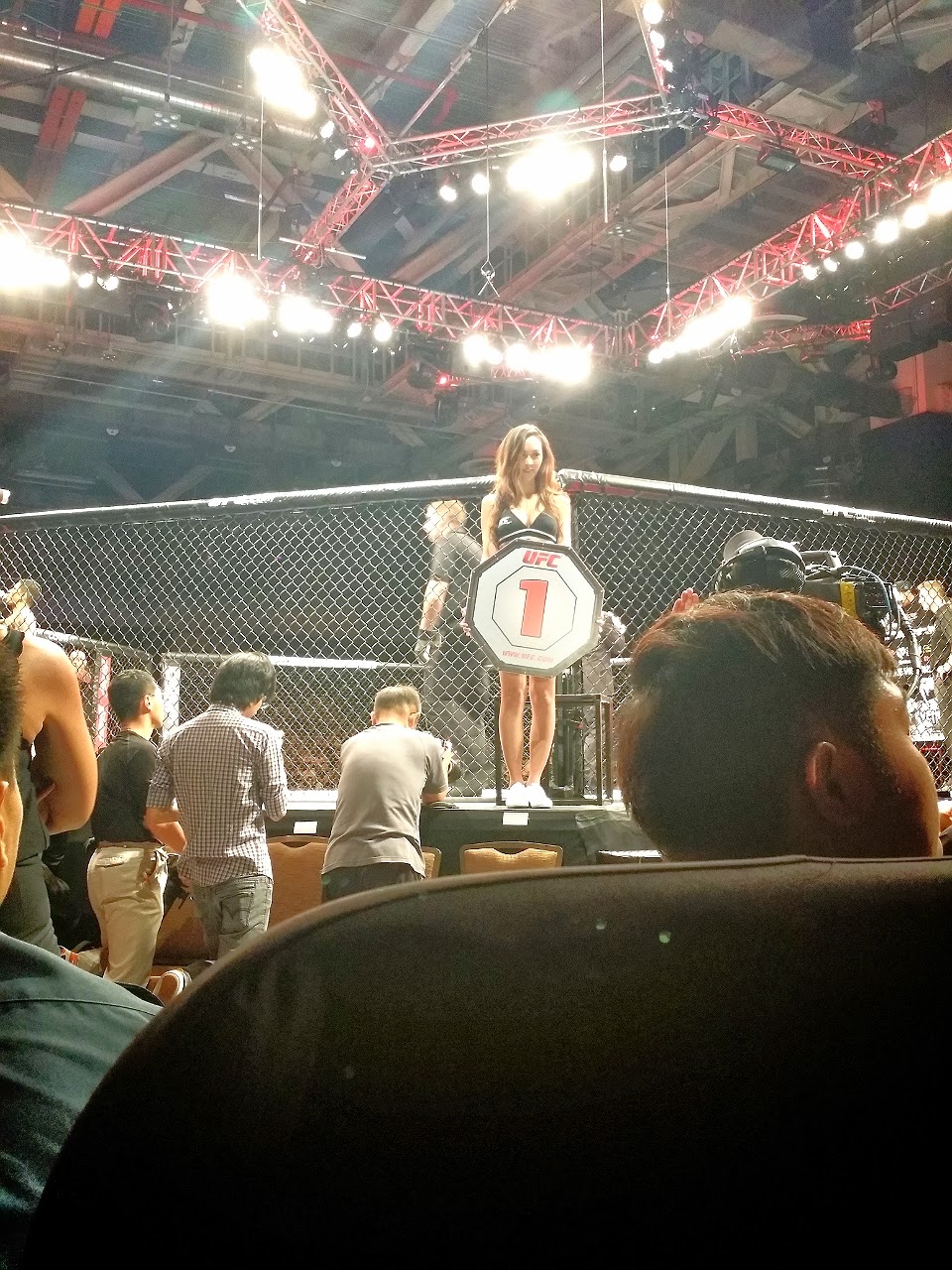 Even for me, I can't help but look at their bod and boobs. Wow... how did they do that? I read their profiles the next day. One is a Japanese model and the other one is a mixed blood I think, living in the States. I think both live in the States because of schooling. Can't remember. 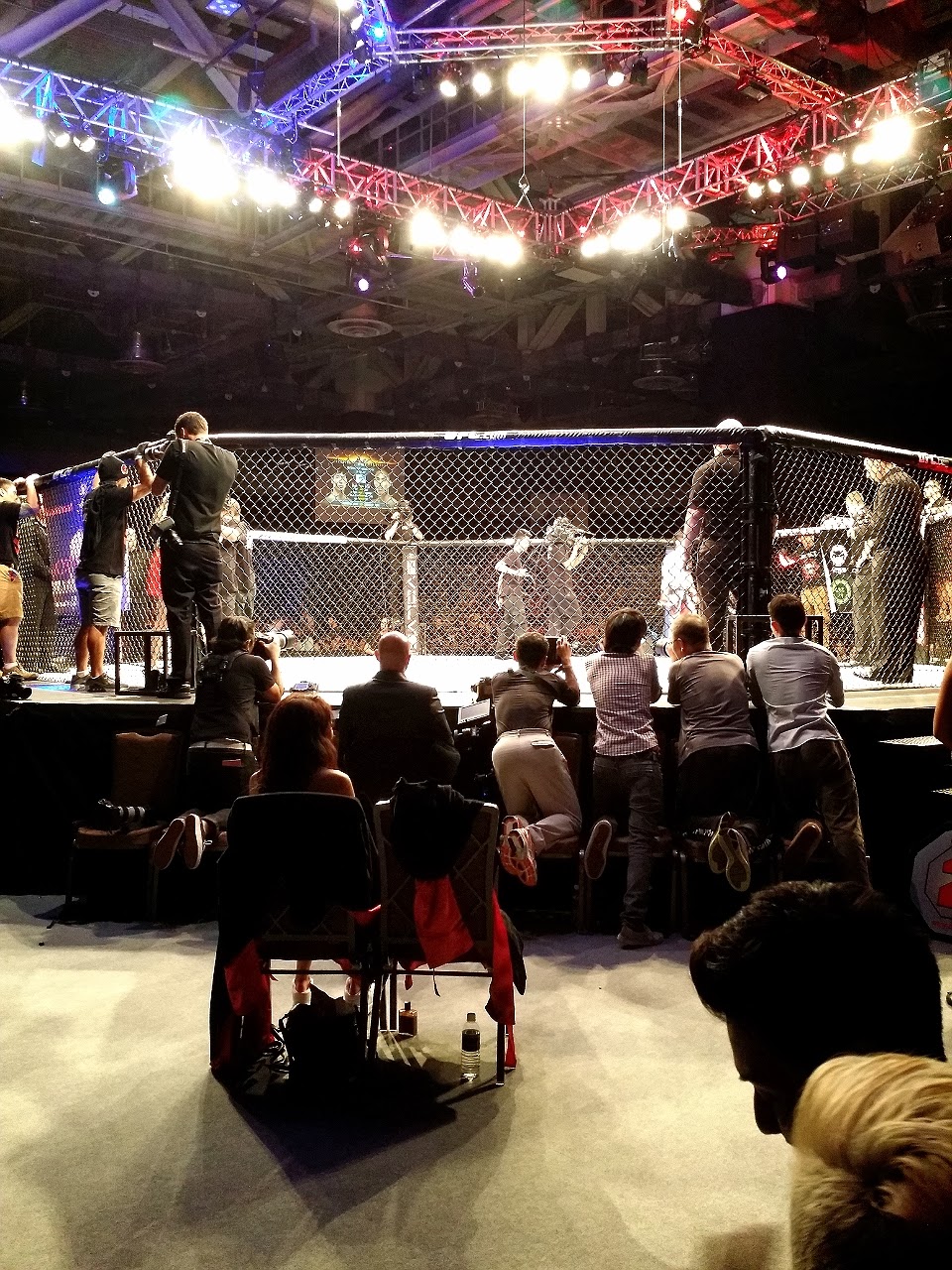 So from afternoon we went for gown fitting till night time before the main match of the night, we are on empty stomach. I was so farking hungry and thirsty. Cannot help it so the guys went to get some drinks and food. And yes the tickets come with food and drink vouchers. Bloody shit! The beehoon is so tasty! Probably because I'm too hungry. But my guy said so too. I think both of us are farking hungry! We each had a wrap too. Superb shiok! 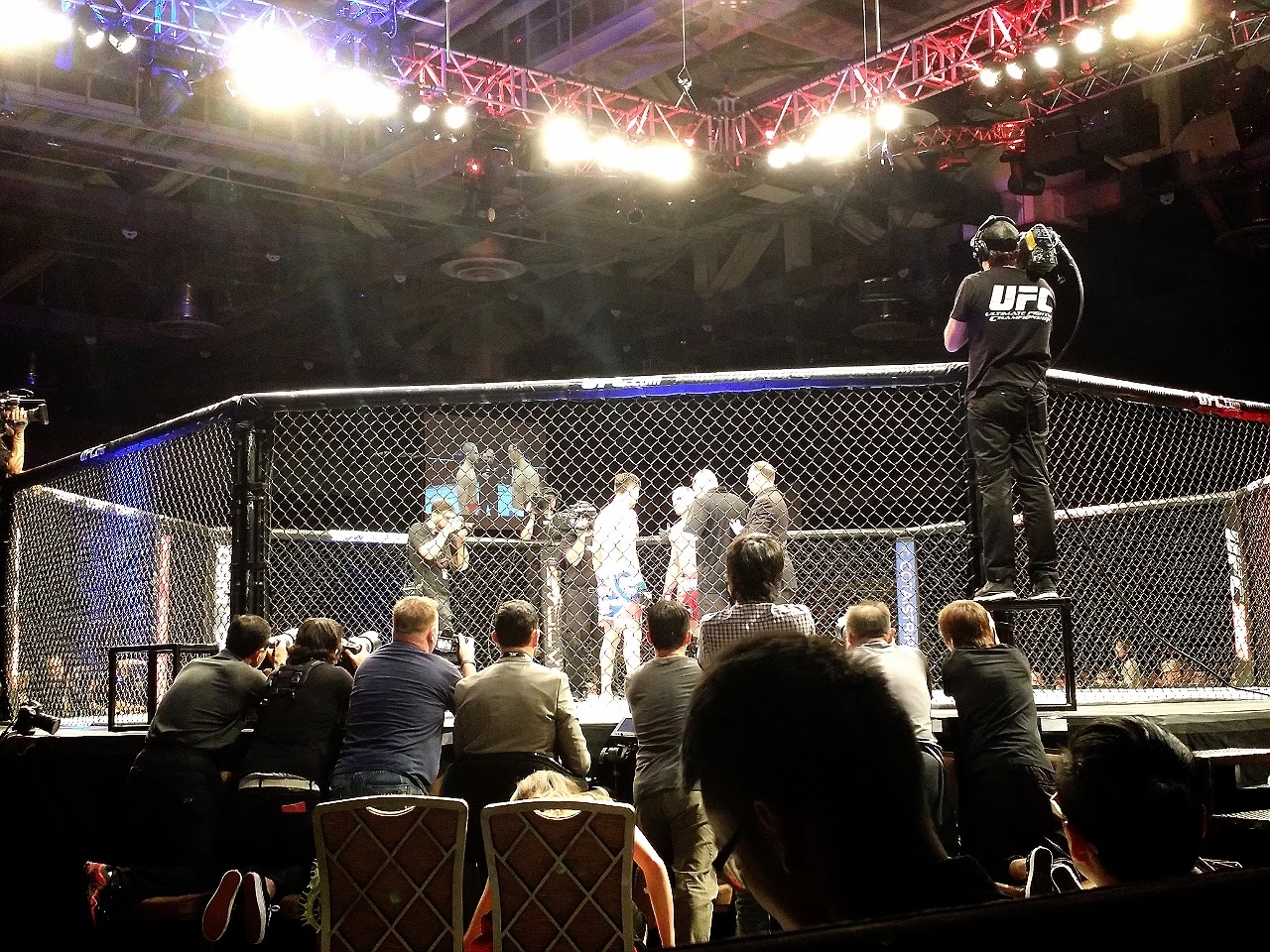 And so the main match of the night starts at about 11.30pm. Can you imagine we watch since 7.30pm? I'm like a mad woman, cursing and swearing and booing at those unethical moves aka illegal moves from the fighters? Yes and that's the only one time I did that without minding how others see me. The majority audiences were guys if I'm not wrong. And for your info, our local pop queen Stephanie Sun is there with the husband too. Either invited or the husband wanna watch. I don't know and don't really care. 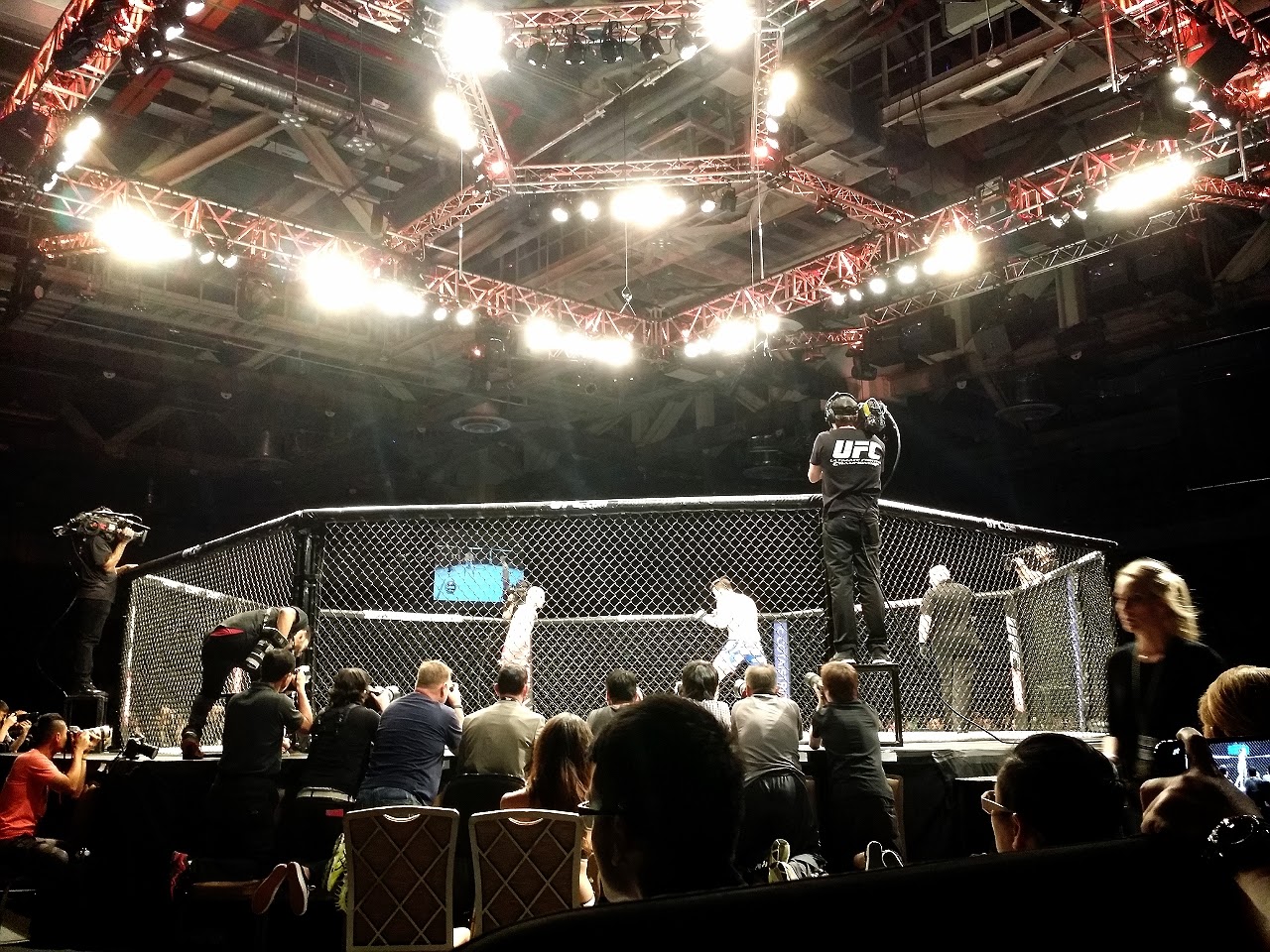 So that sums up my night on 4 Jan 2014 at Marina Bay Sands. So much excitement and initially I thought I would be bored to death but then after that realised I am just as excited and thrilled over such matches. Damn it! I just can't help standing up when I swear at the fighters! 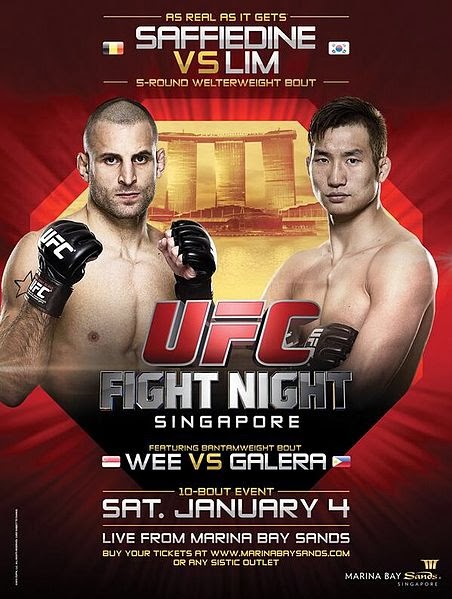 There is always a price to pay when you are in the ring. You get lots of injuries, be it bruises on the face or internally which is dangerous. But their passion in MMA keeps them going. You guys are great! Keep the passion going.

Thanks to Jason for the tickets!!!!