Why I don't want to do the original Vongole instead is because I don't eat clams. Sighz... So I change it a little bit different by using sausage instead. I'm just trying my luck only. I'm not sure if it is going to taste damn good. Eh... not damn good but edible. Fingers crossed.

So a happy Saturday morning. Wake up with excitement as I wanted to whip up my dearest Sausage Spaghetti. Prep all the necessary and here I start. 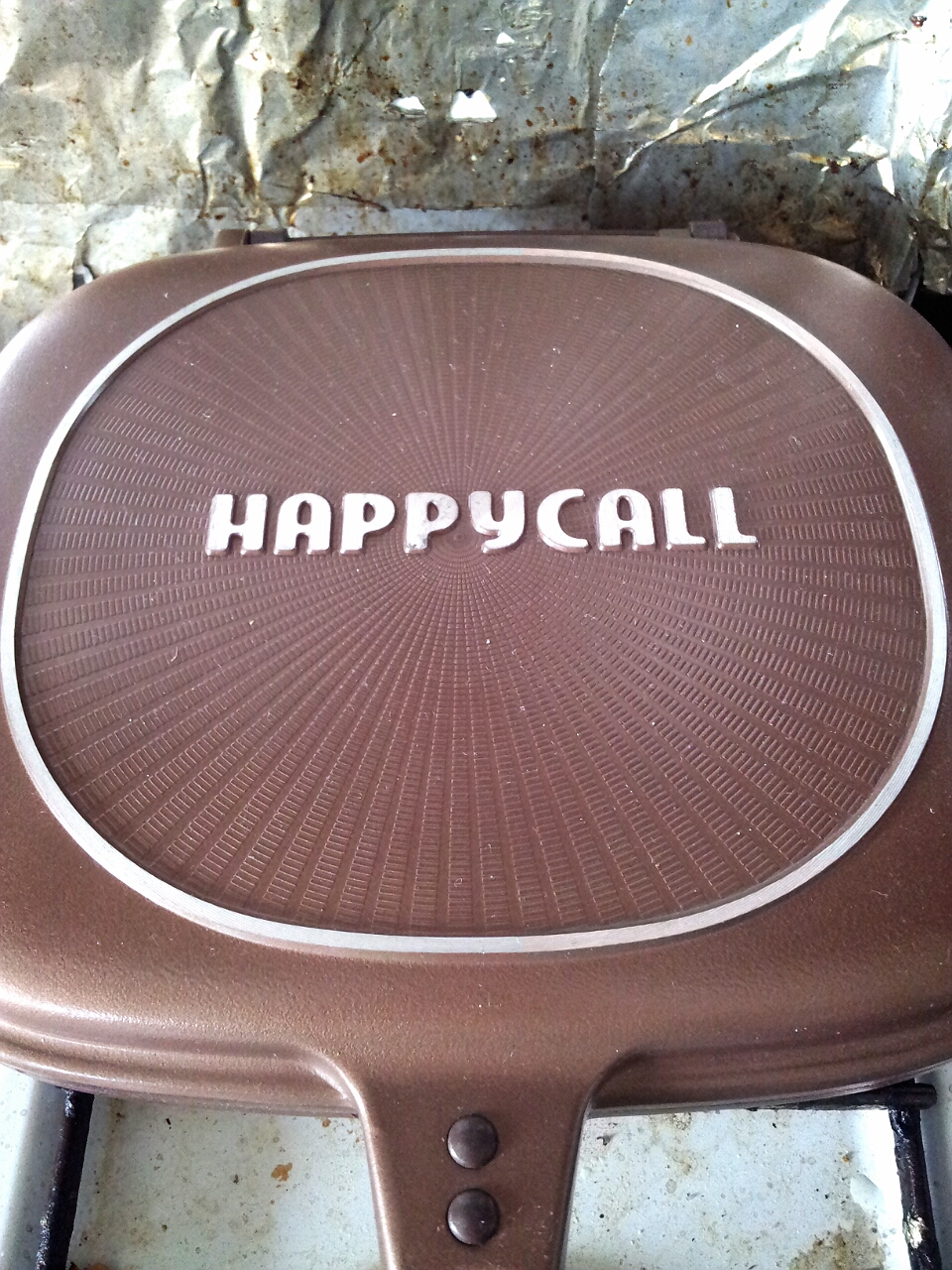 Oops... A bit dirty looking in the background. No choice due to daily cooking by my mum. The stove itself is dirty too just that it is minimized by using aluminium foil to cover it. Anyway... Let me introduce to you my fave pan, Happy Call. I bought it since early 2012 and have been a happy user since then. It requires teaspoon of oil to whip up dishes of your choice. I love it. To me, it is like promoting healthy eating. I bought it thru bulk purchase with my then colleagues (because most of us left the company already) at $69.90 which includes free gifts and free shipping. Wow right? From the then Gmarket which now called Qoo10. So anyway, my Sausage spaghetti will be using this wonder pan of mine. 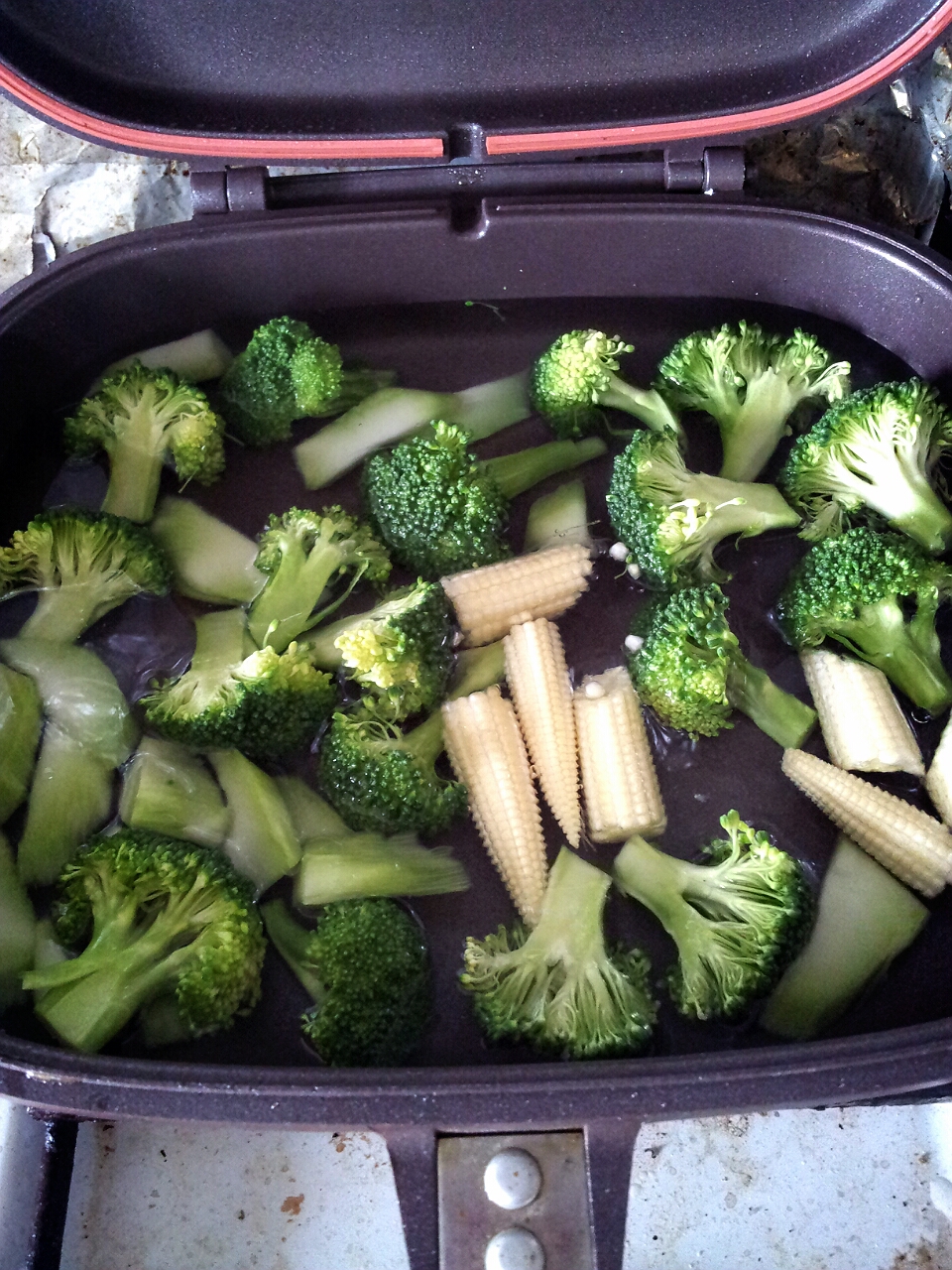 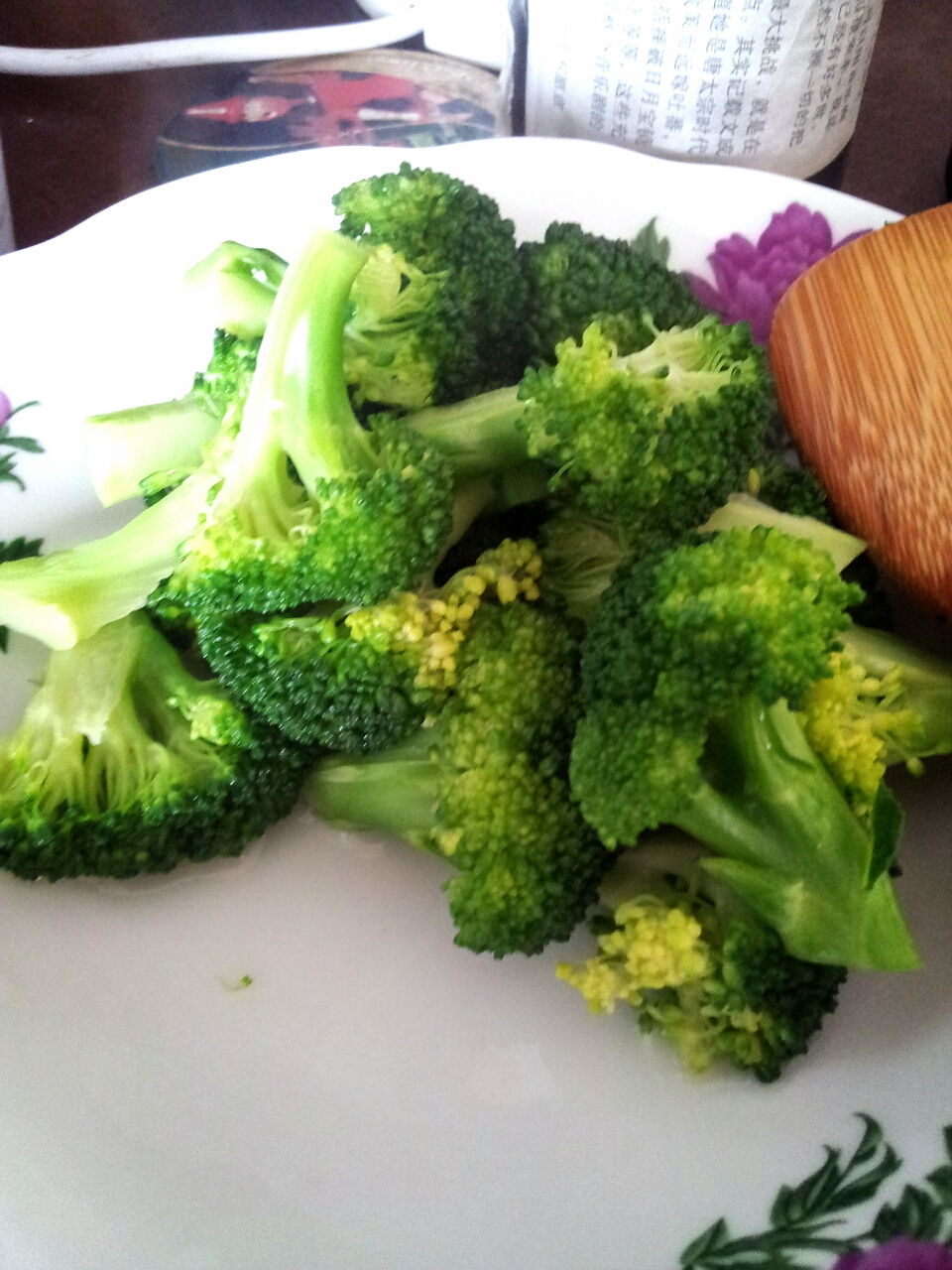 Ta-da... With a drizzle of oil and salt to maintain the colour of broccoli. Well... don't penalized on those yellowish portion because when bought back is like that already. Just trying to maintain whatever it is the rest of the greener portion. Now I'm boiling my spaghetti. Manage to put everything in. This enables it to be of the same texture. I remember last time I use normal pot to boil spaghetti. I know I can just break it into two as it is too long and I can't be putting too much of water in it. But I don't like breaking it. So the texture of my spaghetti, one end is over-cooked, the other is just nice. But yes though when it softens, they will slowly all go into the water. But then the other end is waiting another end to be cooked so what do you think? 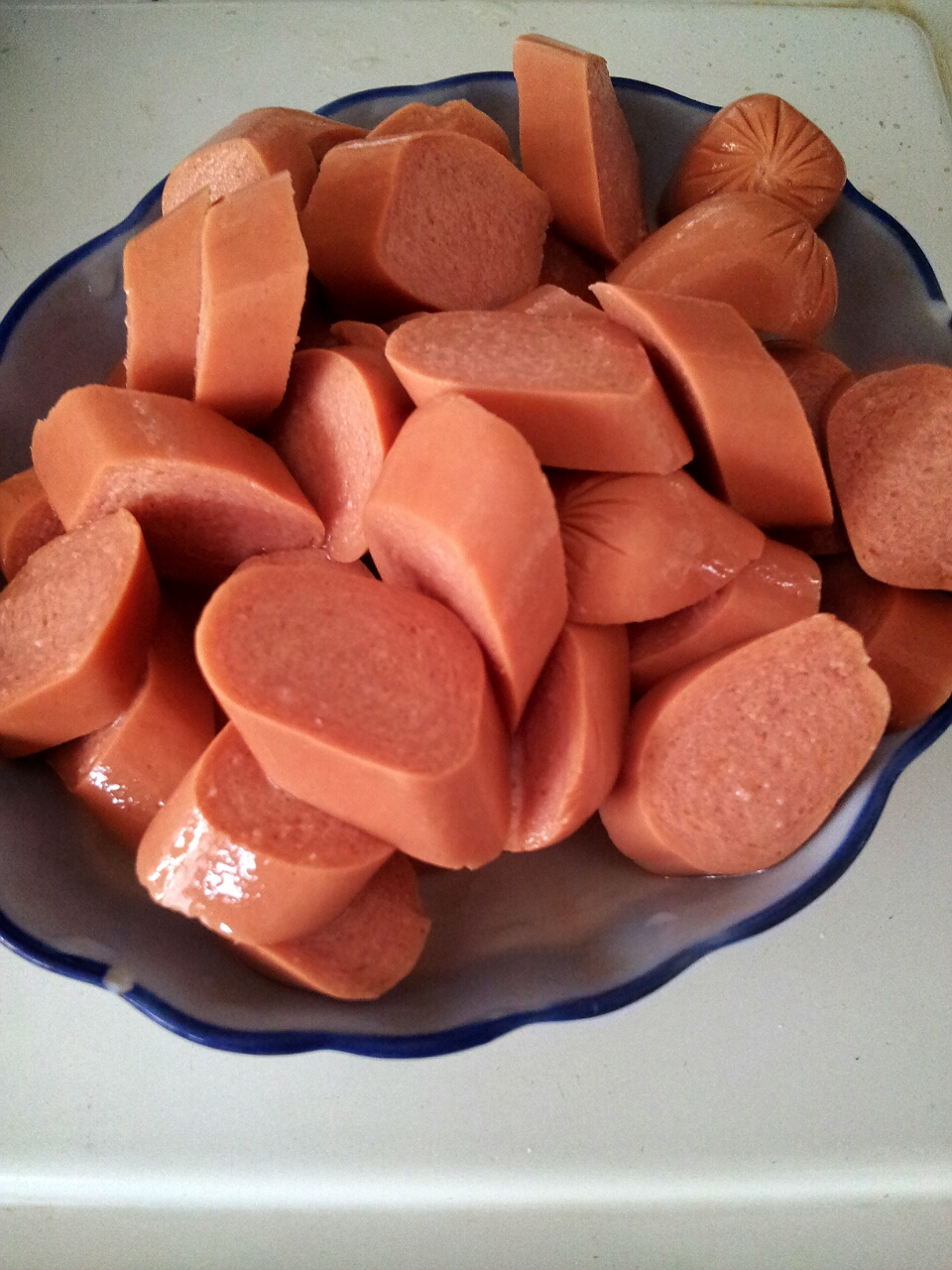 Yeah... My sausage. I cut all of them and put aside for later part when I need them. I never fry or boil them. Because later when put in together with my other ingredients, it can be cooked too. 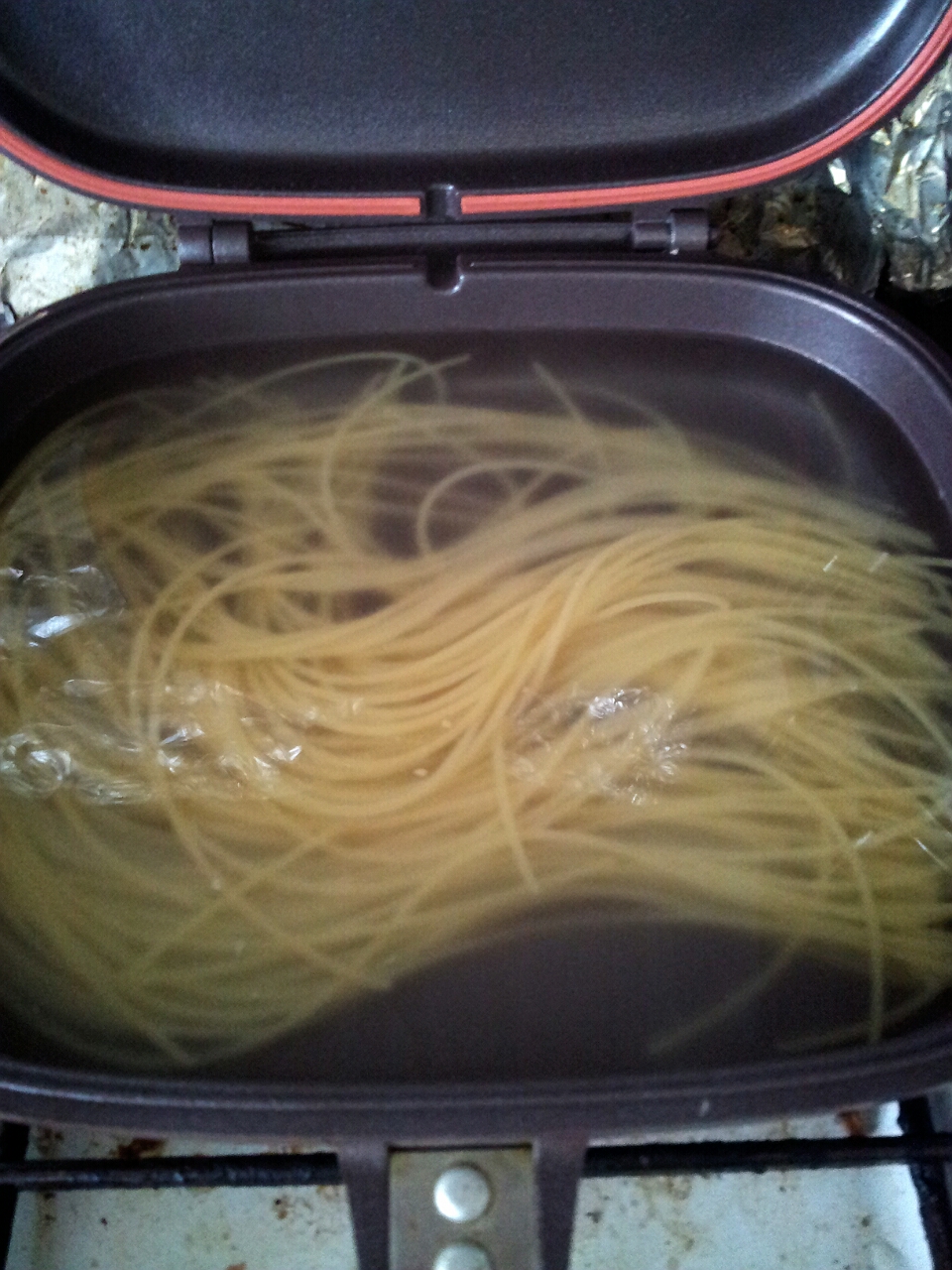 You see???? Better right? All cooked together at a go. Don't need wait for one another. Wahahahaha... So easy and you don't need to bother that much. Oh ya... rem to put a pinch of salt in it before hand. 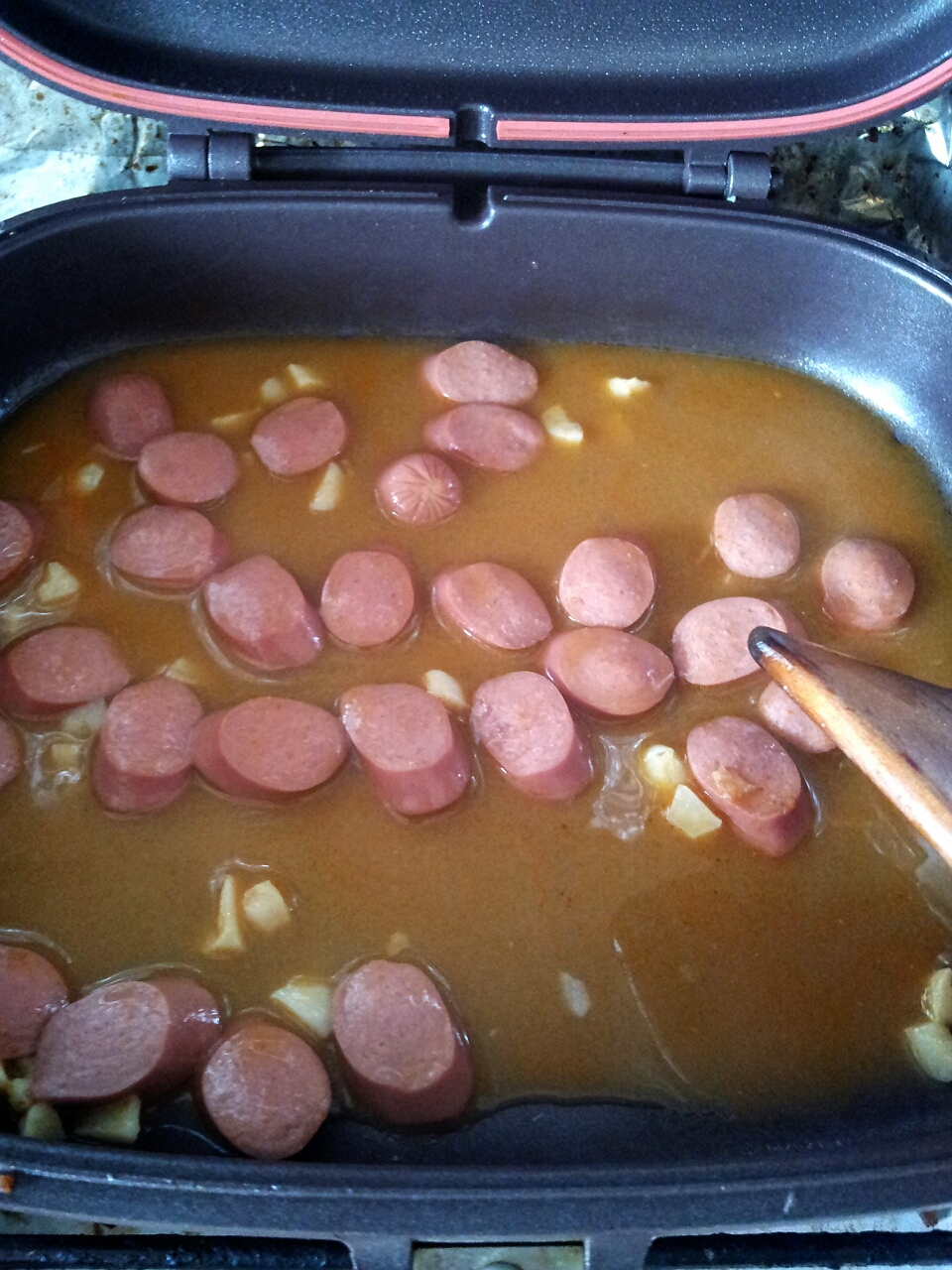 So I started with frying the garlic which I prep earlier on. Later my sausage in it. And then my Vongole sauce pack.  I was wondering why the sauce is this colour. Don't rem having Vongole in this type of sauce. Oops... For your info, I use pre-mix sauce to cook. 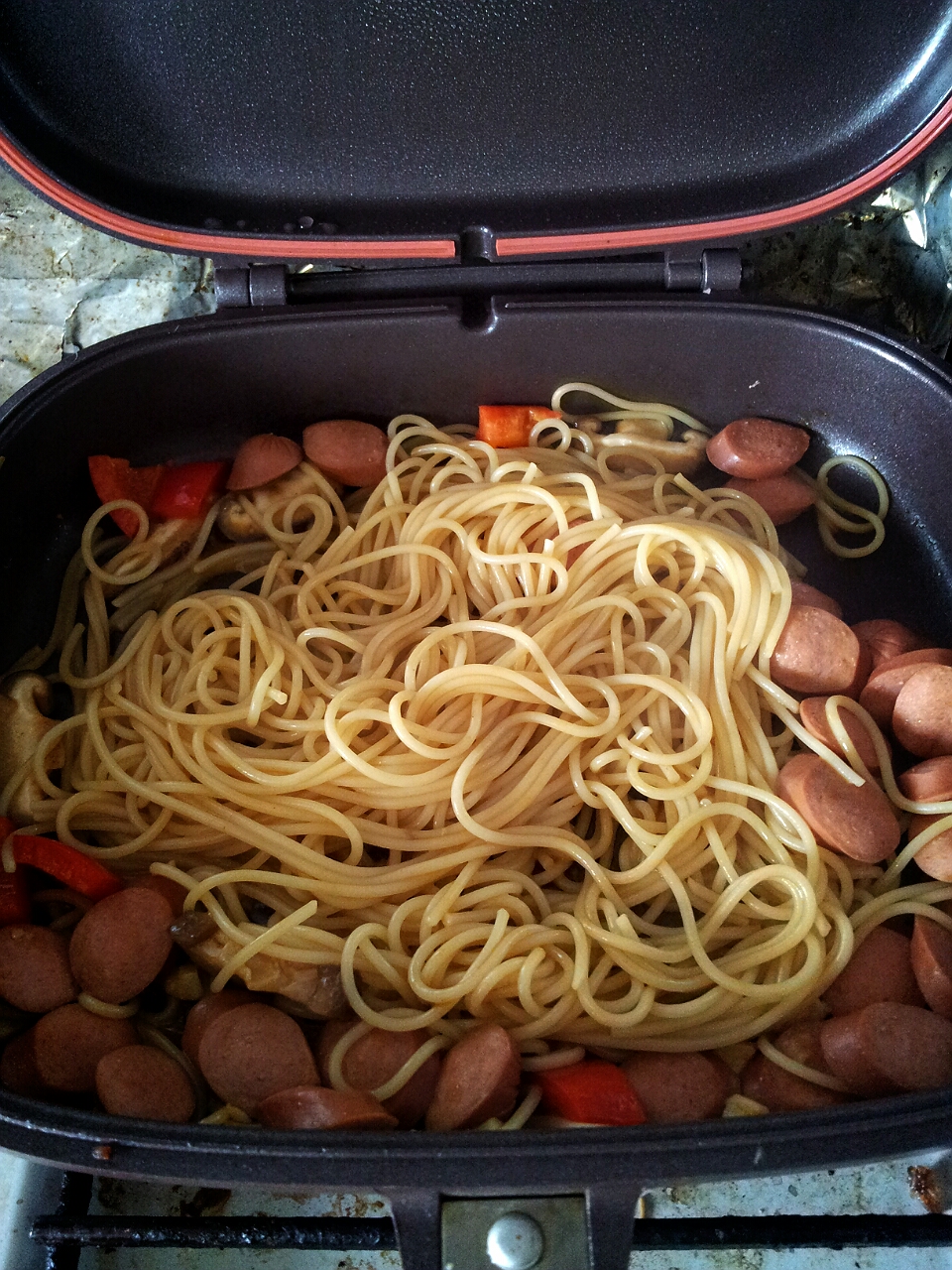 Oh I see... As you throw in the spaghetti, the sauce are absorbed gradually into the spaghetti. Ohh.... So you can see here... It going to be ready in no time. My mum asked me to throw in some mushrooms and red peppers to add in my colour. I abide to it. 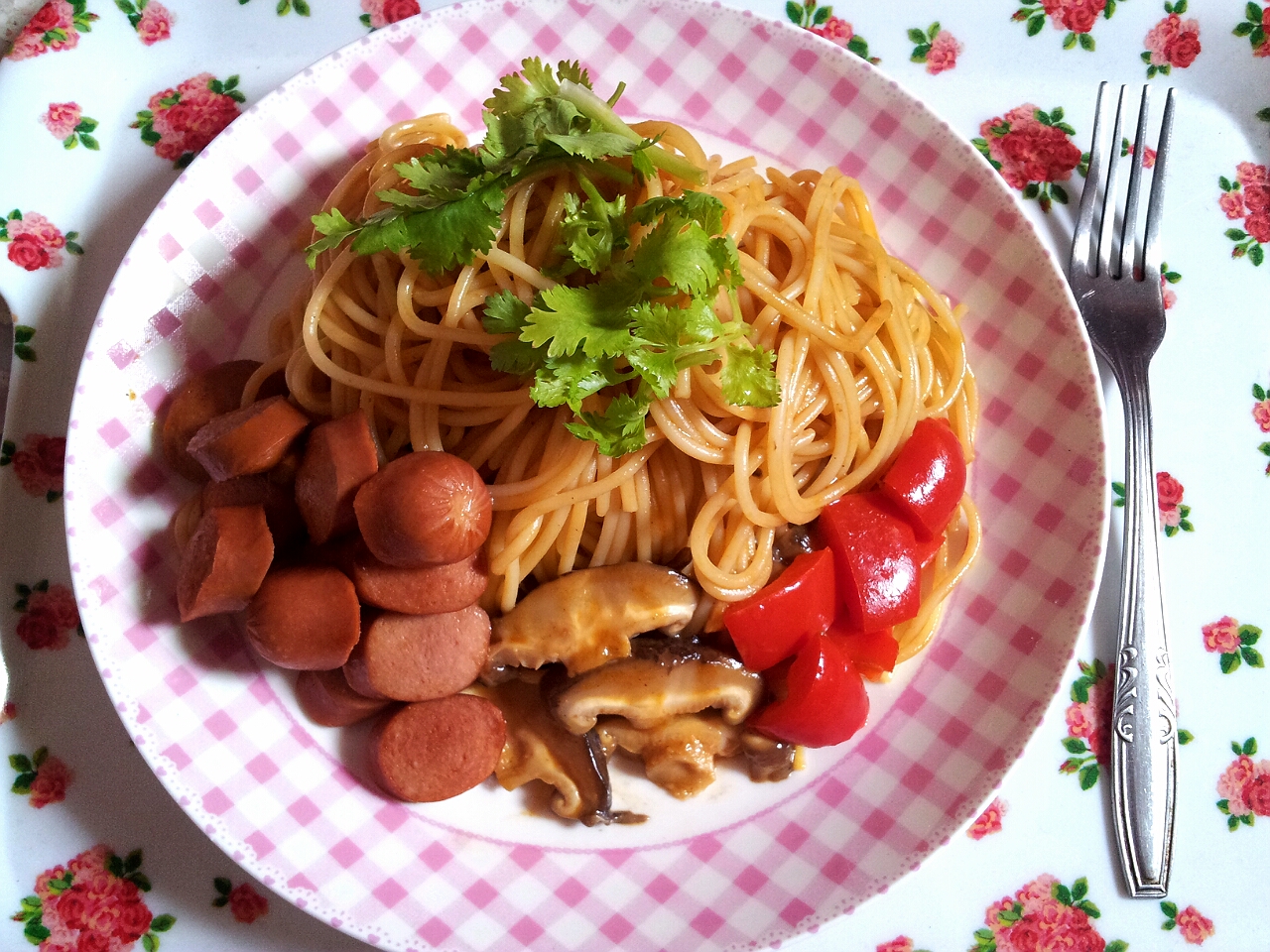 So this is my finished product. Presentation nice or not? I think that fork spoil it somehow. Arrghh... Must get something nice. This is my Sausage Spaghetti.

For those who want to know what pre-mix I used, here it is: 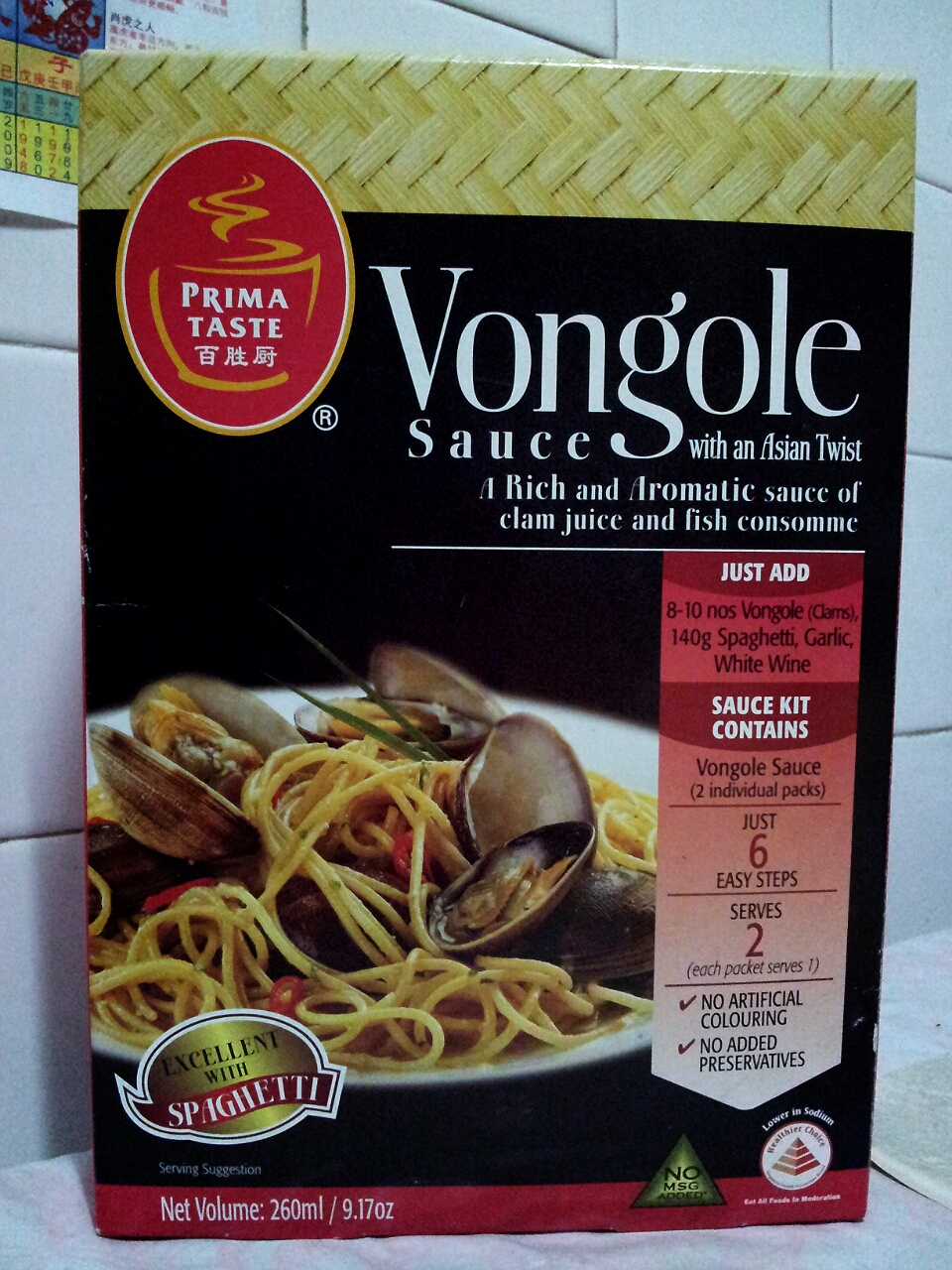 Can get it from Cold Storage near you.  But I bought this pack during Food fair. If I'm not wrong, this pack costs about $5.90++ or something less than $7. You can check it out. 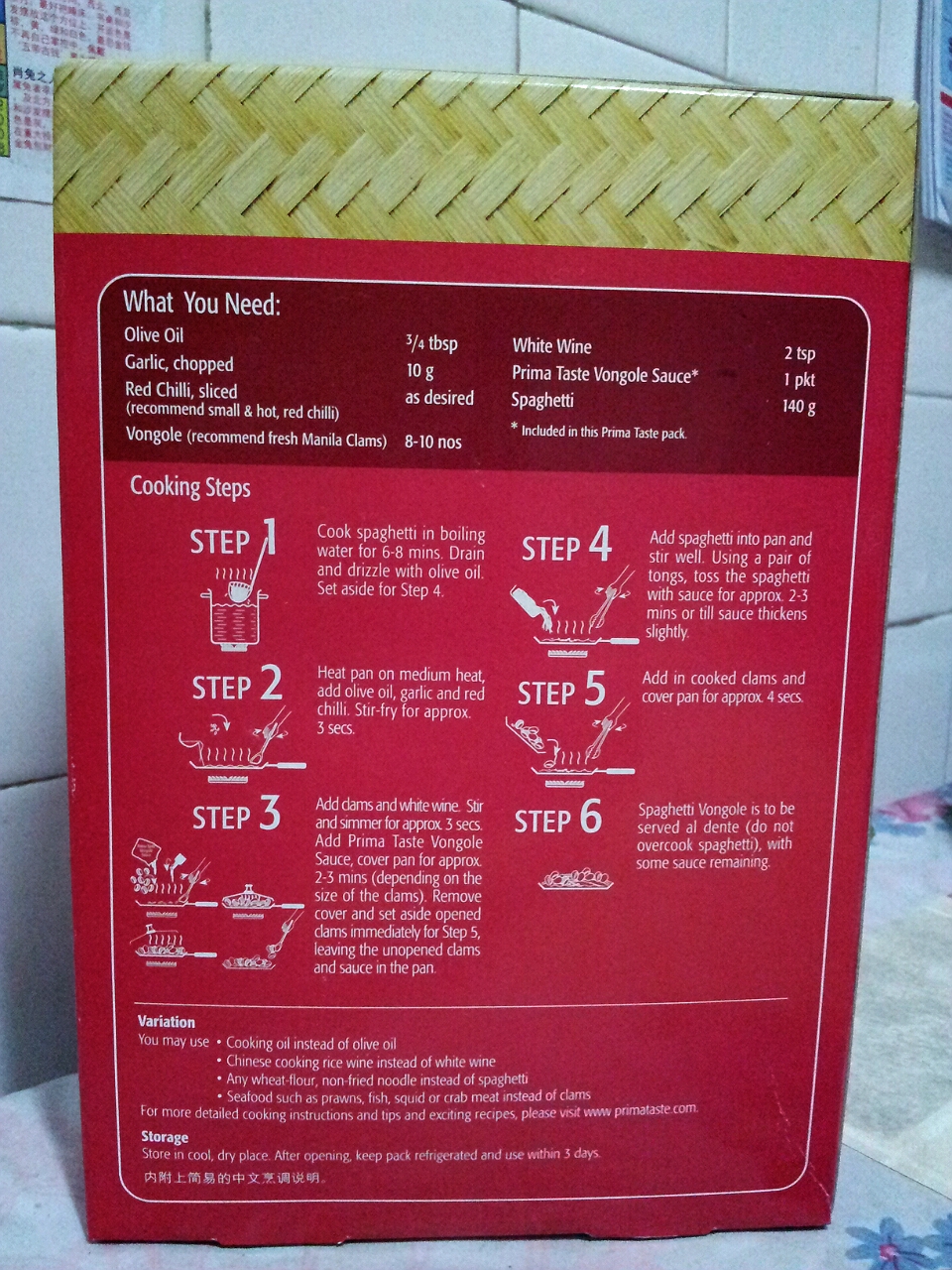 Behind the box, it teaches you the steps. And the bottom part where it tells you other than clams, what else you can use. But my verdict after tasting it: Better to use seafood and not SAUSAGE!!! U know what? I end up putting tomato sauce to my spaghetti. My mum keep insisting that all the spaghetti must put tomato sauce. Arrghh.. So don't need lor. Only this we have to put in order to swallow it. Because it tastes so ocean lor. U are not going to put tomato sauce in Aglio Olio when it tastes damn good already right?

There are two packs of sauce in a box. I used one pack only and will explore the last pack in no time. :)