I was so excited about making the seaweed crackers for Chinese New Year at home. For my family, my fren and my guy. I saw a post from Facebook Happy Call Group that it seems so easy. Okay. I am very naive in this. But it will definitely save a lot because outside the cheapest I saw was $11.80 a bottle at the bakery. But if I can buy ingredients and do it myself, I save $2.65 though is gonna be time consuming. 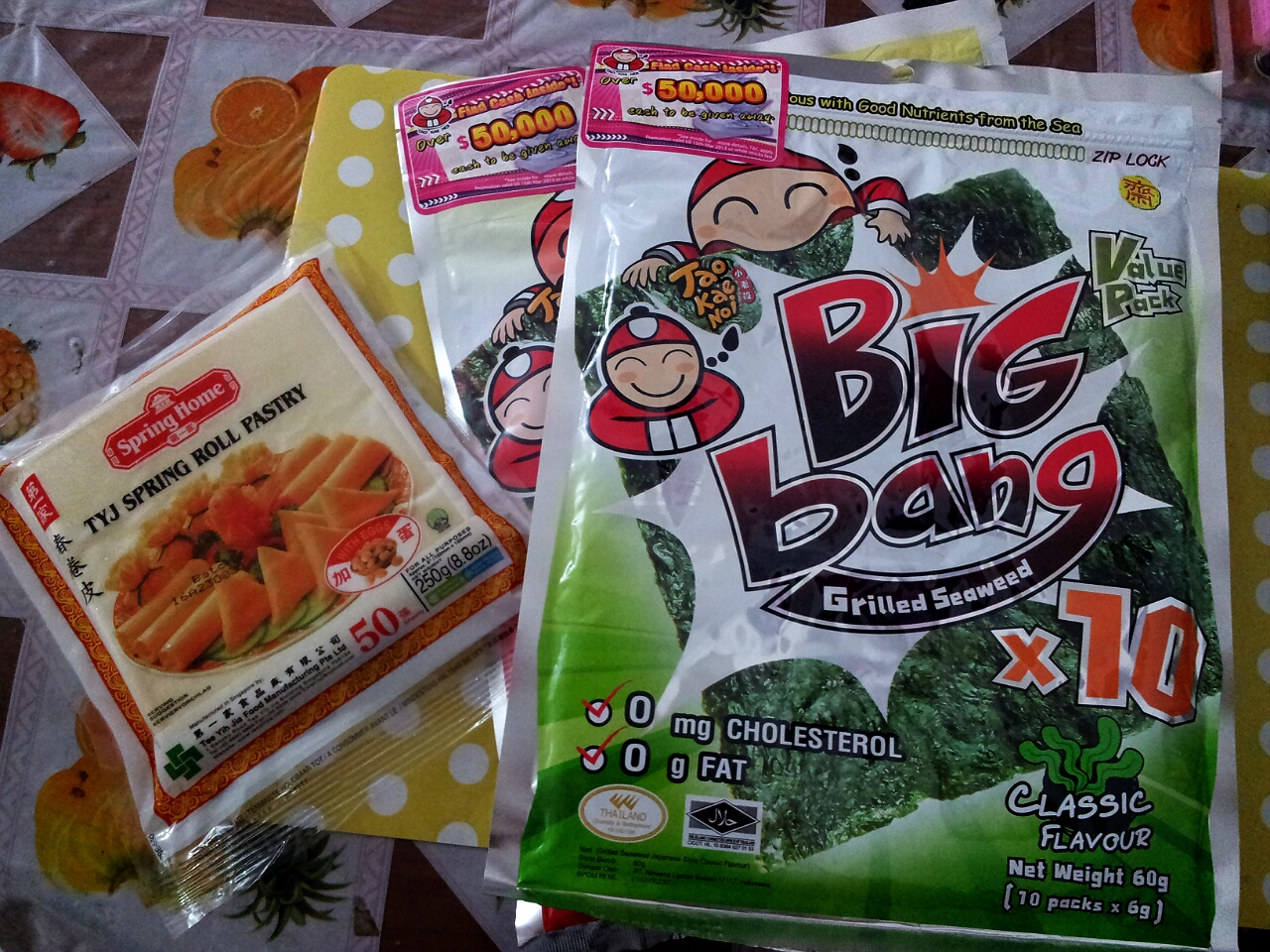 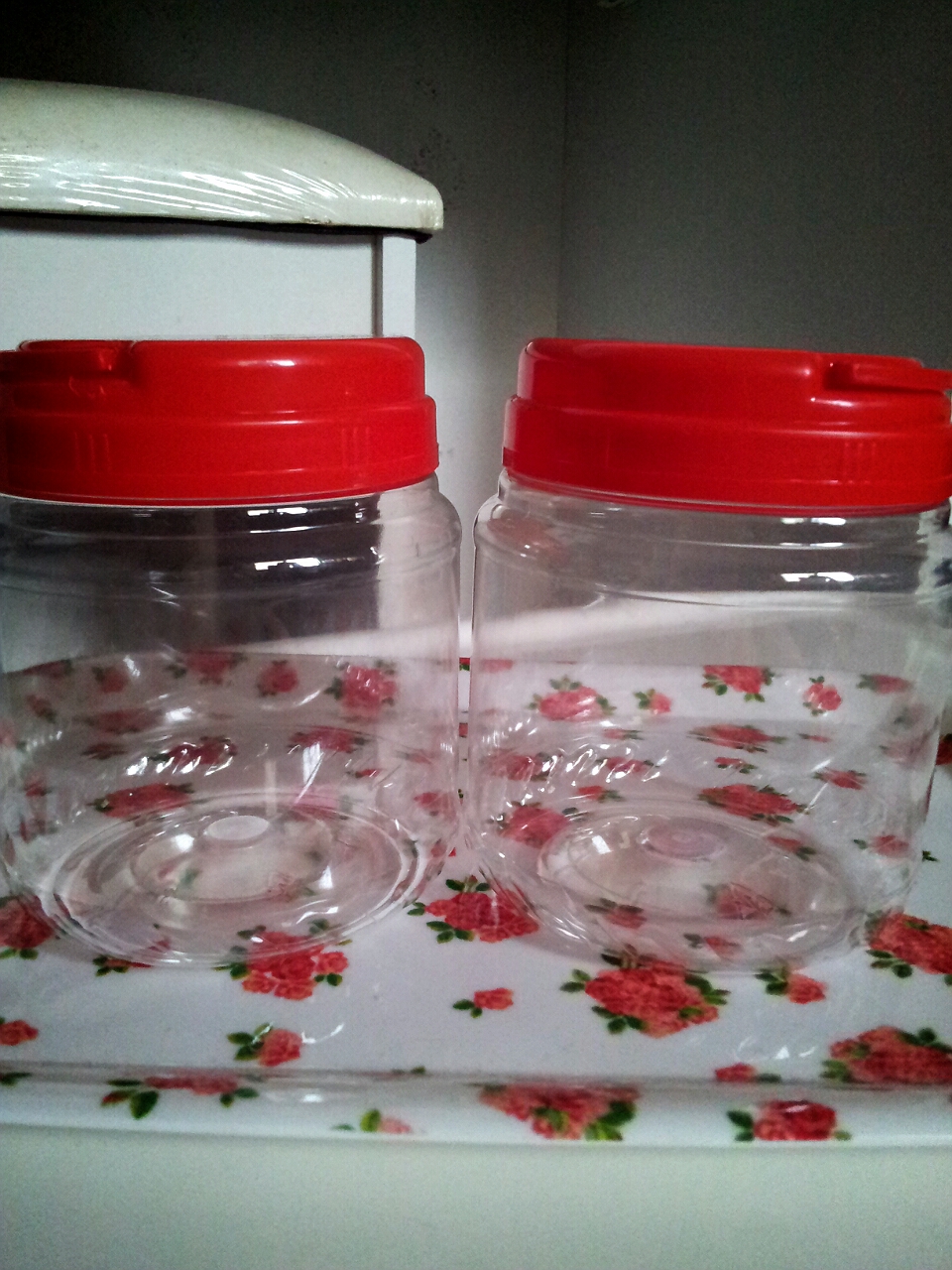 Because they (FB Happy Call Group) used seasoned seaweed, so I bought that Big Bang seaweed which is one of my regrets. Total cost for all the necessity is $9.15!!!!

A day before making, I was discussing with my mum how should we cut the size for that popiah skin. I wanted it small but don't know which is the appropriate size. Then end up she said cut into 4 a piece and do it the triangle way. I think is not bad idea too because normally is a rectangle shape or they roll it. So set for that idea. So happy. In fact, my mum was not convinced that there is such goodies. OMG! Can't blame. Never buy before and try.

So yesterday is the making of my seaweed crackers. First attempt. Pretty excited. After work rush back home just for that. And I'm not hungry at all for the whole night. So concentrating in making it. 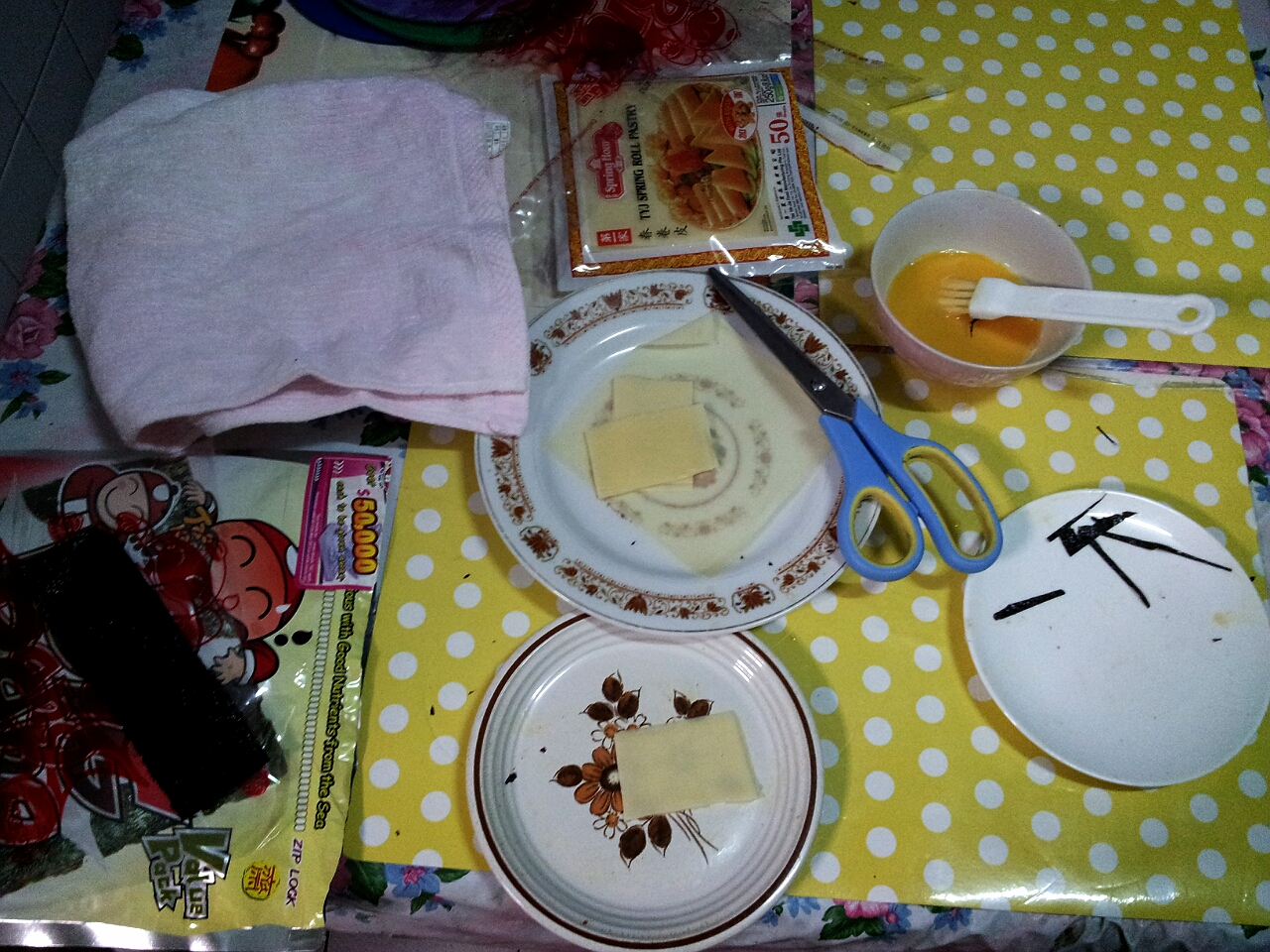 And yes... This is my working table aka dining table. Saw a bowl of egg? I need egg to spread on the popiah skin. By the way, the popiah skin that I bought is with egg already but for the sake of letting it stick to each side, I spread a thin layer of egg on it before putting the seaweed. But I guess if next time I do it again, I won't buy the one with egg. Pointless if I am going to spread egg on it. And is cheaper. $1.70 per pack with egg and $1.55 per pack normal one.  And the seaweed is nasty! When it is taken out in the open, the oil starts to surface out. For that 4 hours of making, both hands of mine are on a sticky job. DAMNIT!

In the midst of doing, mi and my mum were still thinking what is the appropriate shape to do it in because the initial idea of a triangle shape, after putting the seaweed in, the side of the skin was left dangling there. So fugly!!! We tried cutting a bigger shape of seaweed but it seems too big. Really time-consuming. And the seaweed is so sticky due to the oil surfacing out.  My mum keep asking why normally seaweed are cripsy and dry but how come the seaweed that I bought is in this type of pattern. Arrghh... I also don't know because I seldom had seaweed. 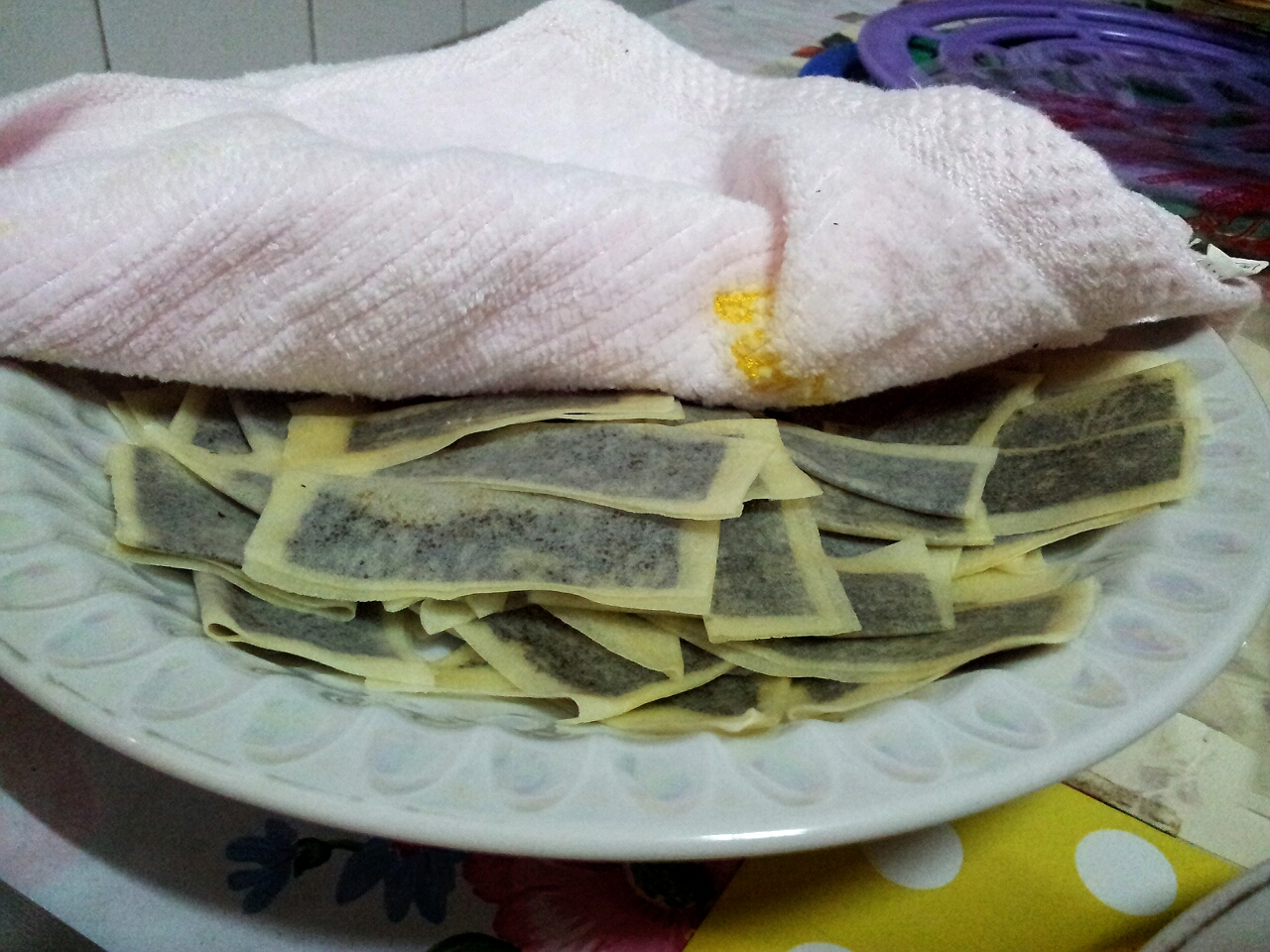 So this is how it looks before frying... A bit yellowish right? Cos of the egg spread I guess. Need to cover them up because the skin will dry up and become harden easily in the open.

And so I fry the first round with my Happy Call Pan. 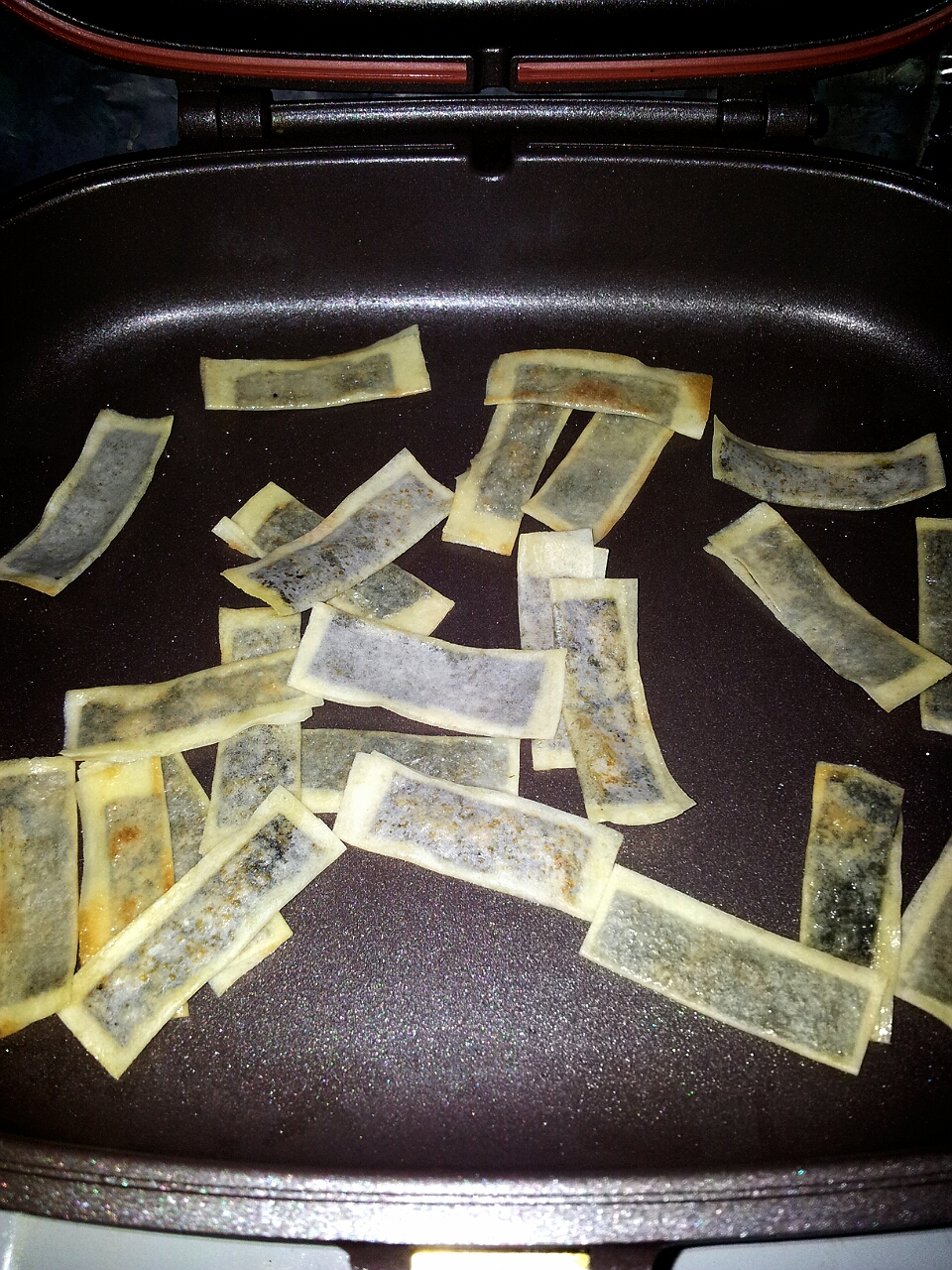 I put about a tablespoon and a half of oil in the pan. If only I freaking rem that this is how it supposed to look like, the rest of my hard work won't gone to waste. And so I was not convinced that this is how it looks because in my idiotic mind, it should look brownish in colour. F*** me! Off the fire. I use wok with lots of oil in it and fry. Damn it! This batch also fry too. So is like double frying. 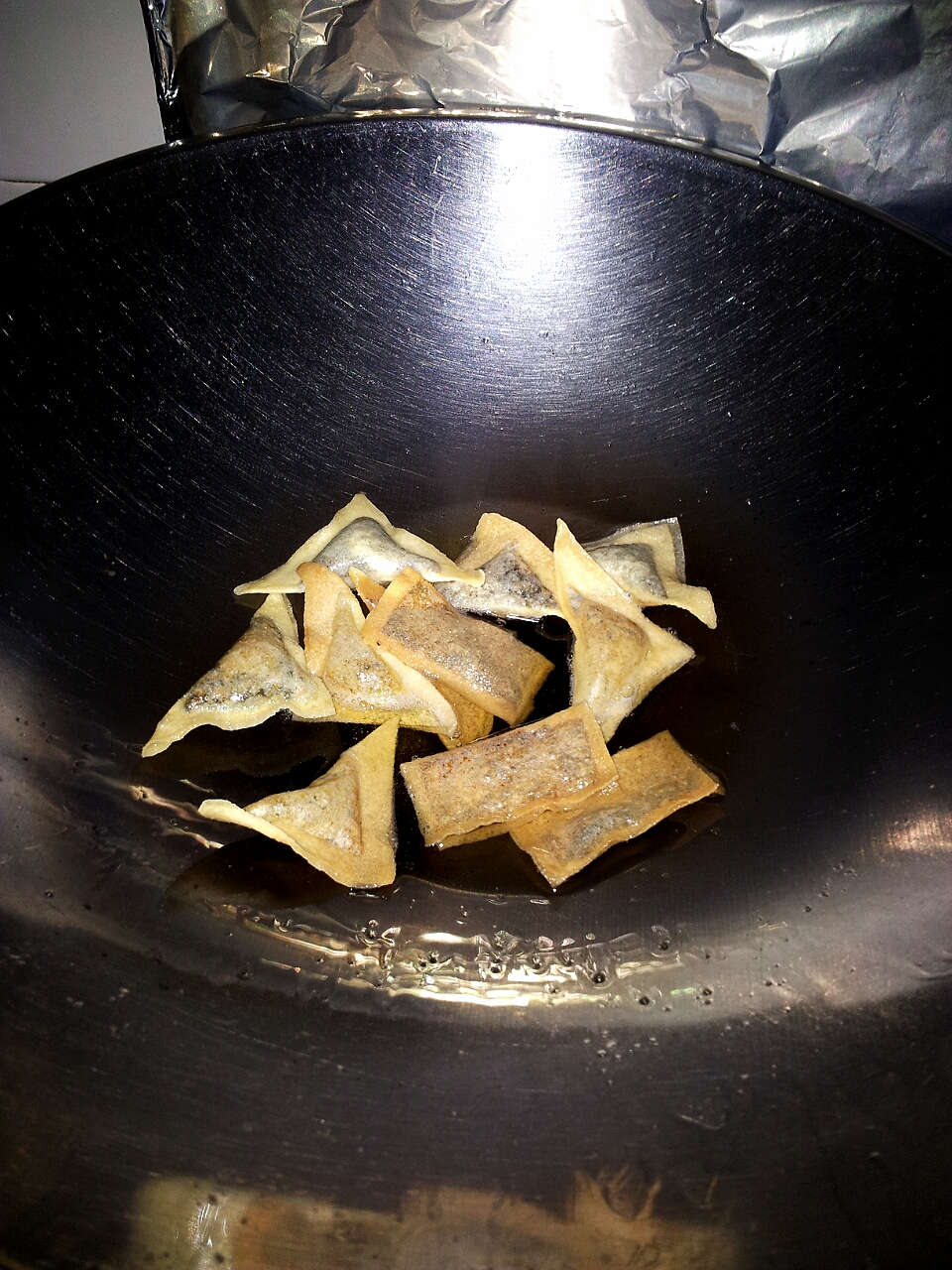 Sorry... I know you will be thinking how come there are different shapes of my crackers in the wok. Ya lah of course. We change our mind at the last minute so different shapes appear. But the later batch all one shape. Same shape. Rectangle. 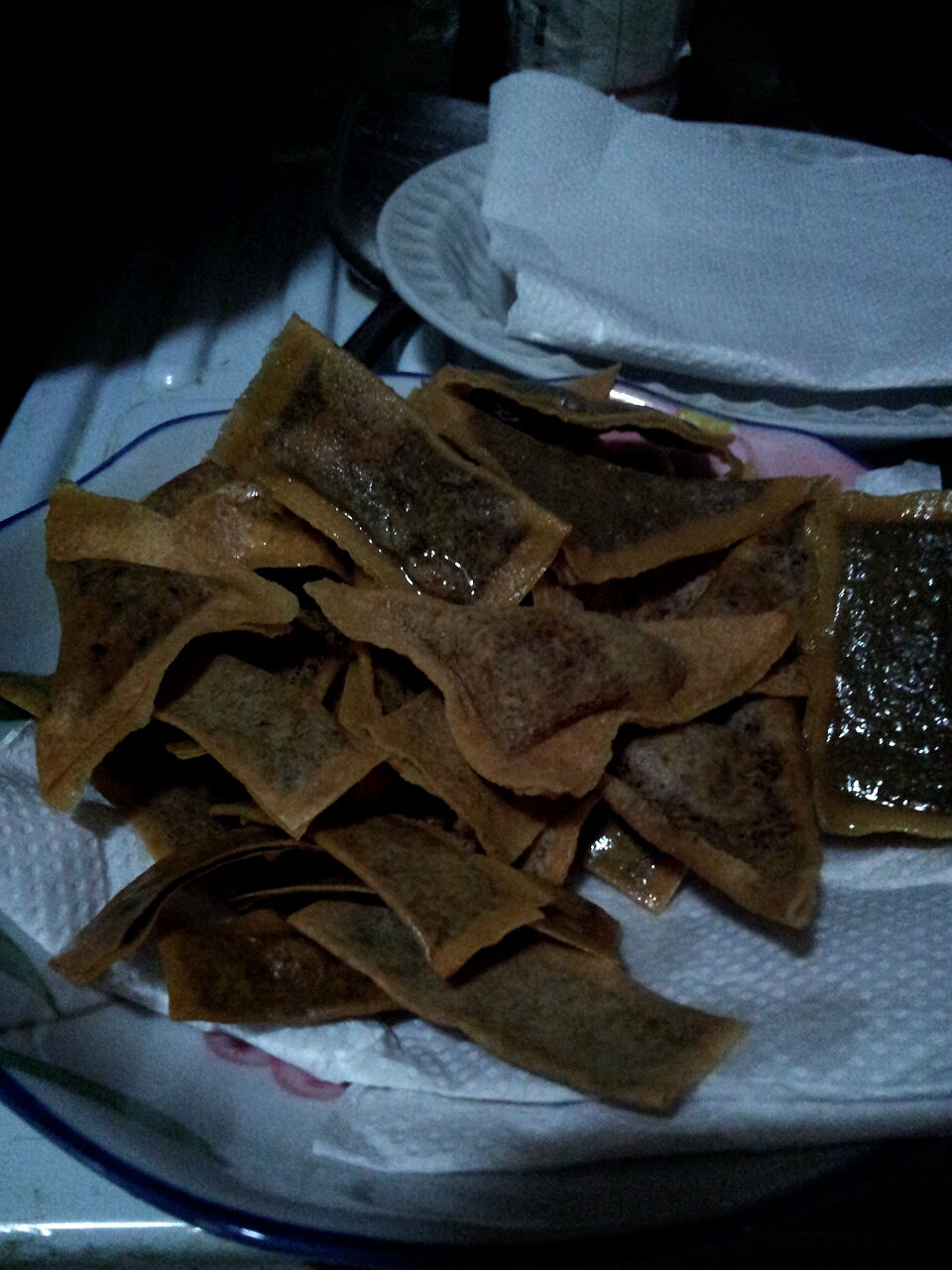 Looks oily on some right?  Ya never dry up the oil lah. But still manage to suck up the oil with the kitchen roll. 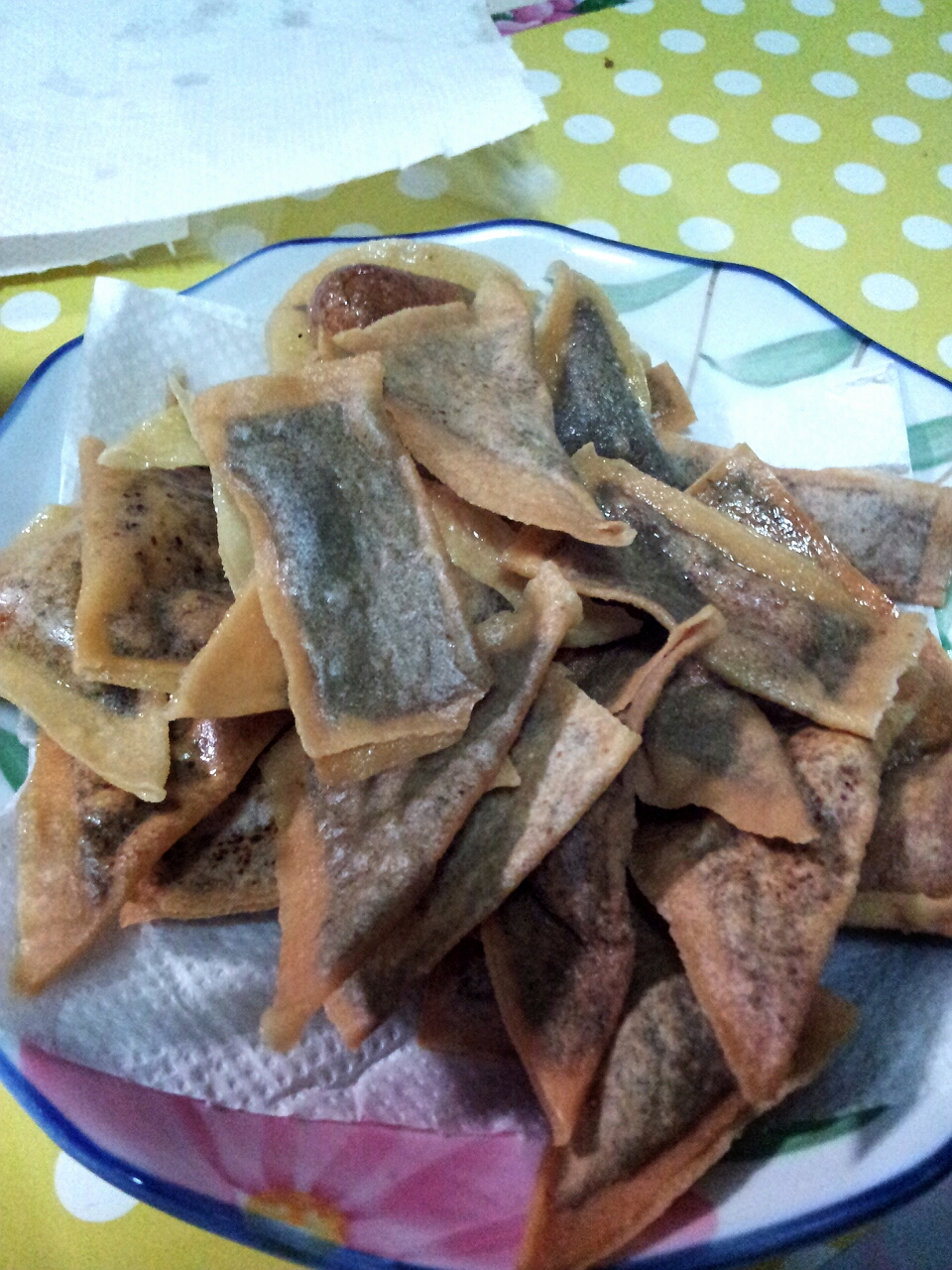 What do you think?  I tried the first batch. Damn it. It tastes just the popiah skin. Where is the seaweed taste? My mum tried. She said there is seaweed taste. I get my bro to try. He also say only the popiah skin taste. FML!  Arrghhh... And I had one which burst out with oil. F*** F*** U!!!!  Never mind. So I continue working on it. Keep making. My guy called me but I can't be bothered to answer for at least thrice. My mum join me in the making on and off. Cos she wants to watch tv show. At about 9pm, I got my mum to fry the 2nd batch while I continue making. 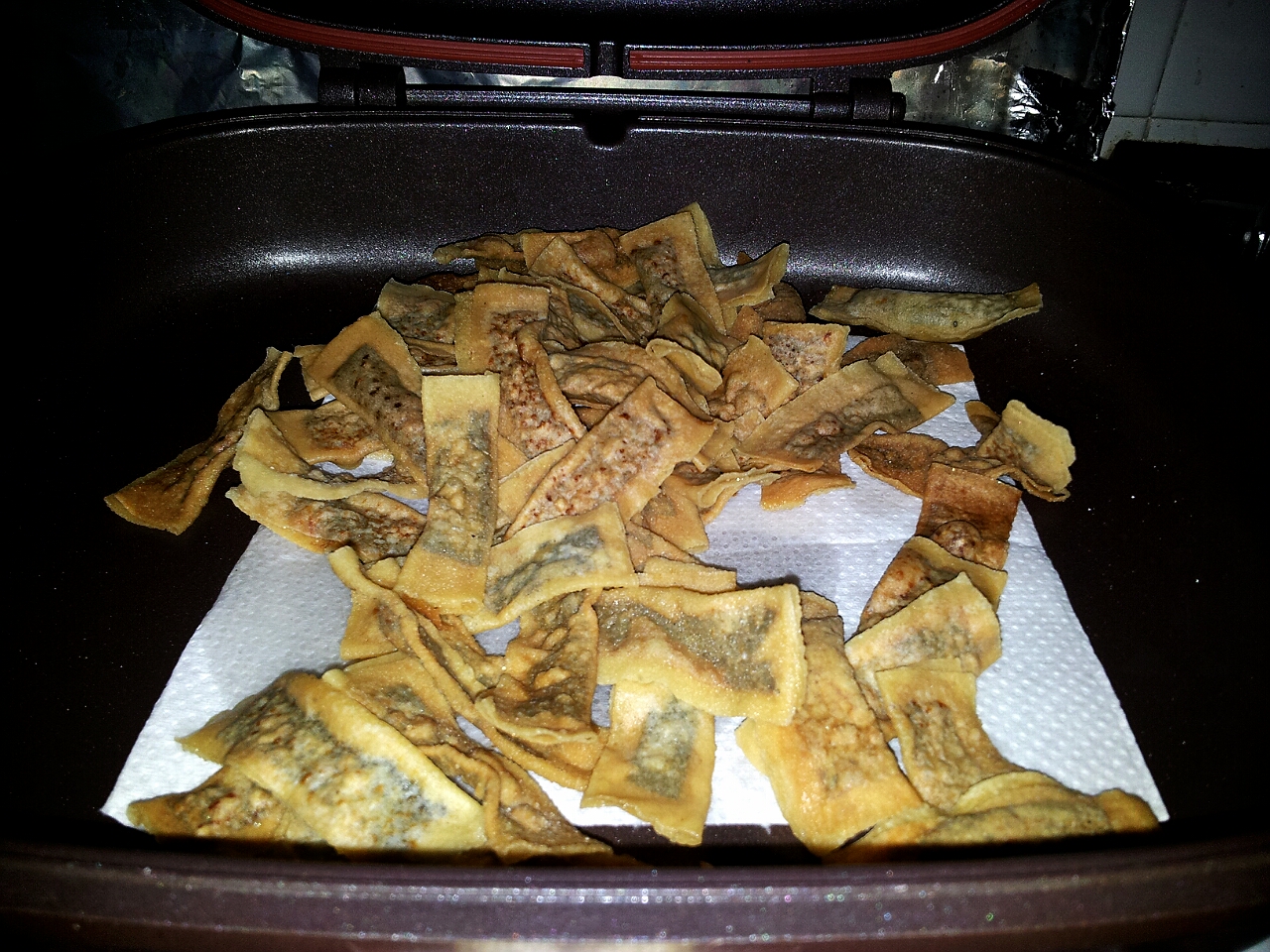 Okay... For your info she never use Happy Call to fry. Just put it in here first to let it cool down while she fry with the wok. Got skill hor. I still lack that skill in frying. Must know how to catch the right timing so that it won't go charred. Damn it.

Last bit of my making, I do the frying. It is a disaster man! Because I wanna take photos of the progress and end up it turns charred real fast. FML! 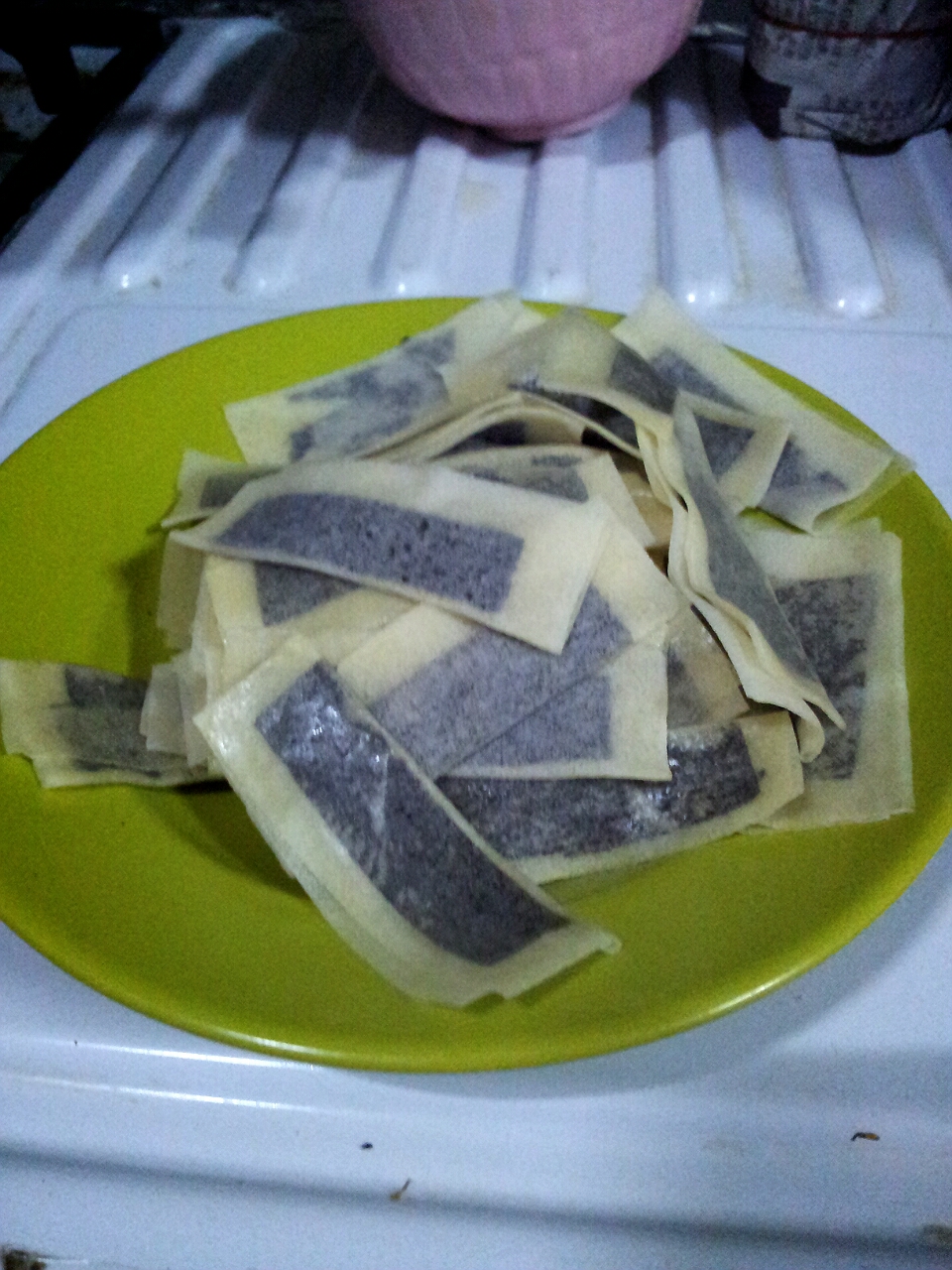 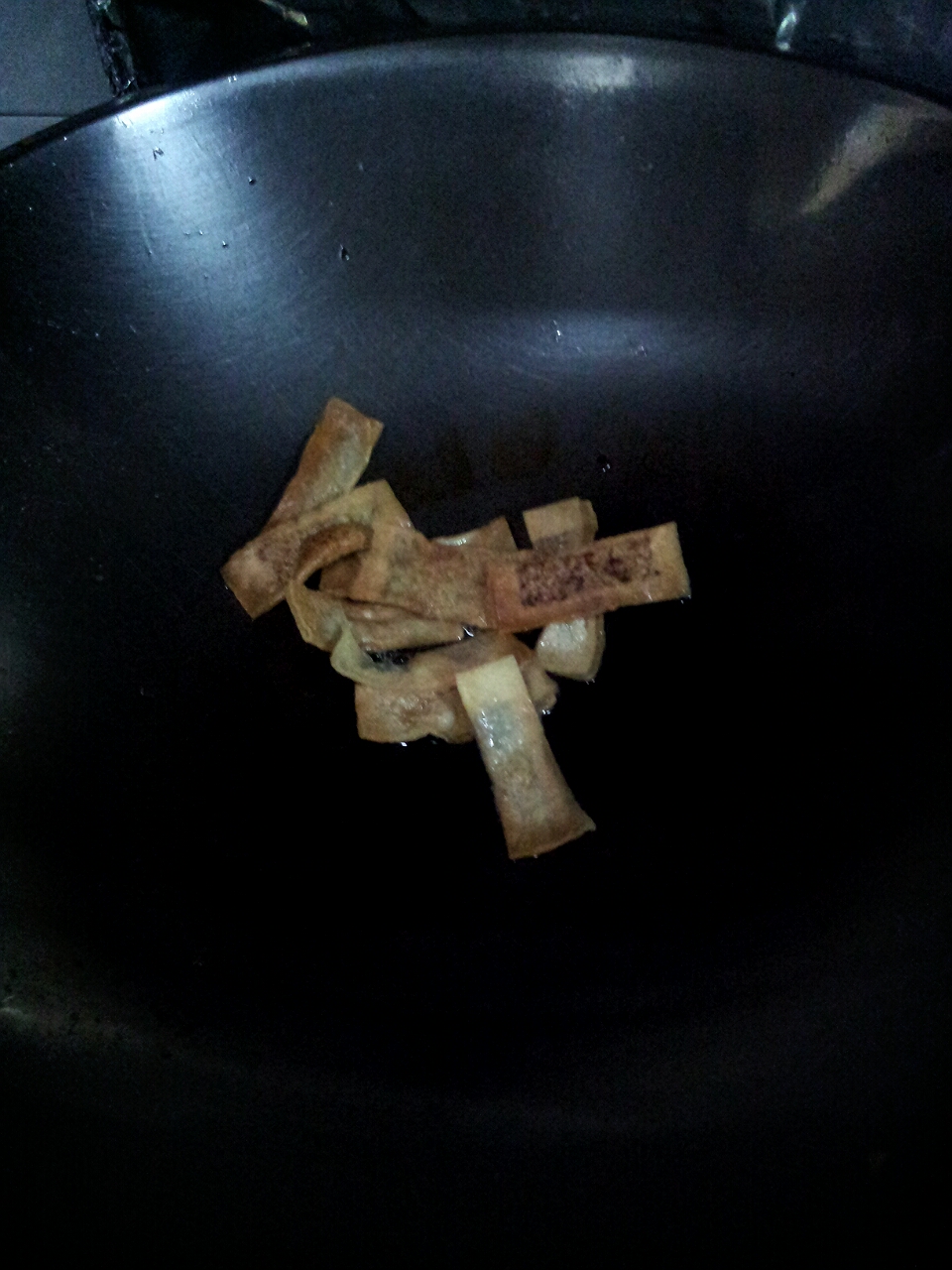 Okay... That's it. I wrap up for the day. Some are charred so put in one bottle. The rest which is accepted by me is for my family. My mum said is special because usually are those tiny spring roll wrapped with pork floss or something else. Or is fish and prawn crackers. Haiz... She don't dare to try new stuff that's why she don't know there are so many goodies out there that are already thot by others and making big bucks during CNY liao. I keep asking here to go and check it out the bakery at our market that sells the seaweed crackers. She must see how it looks like before knowing what is wrong with ours. When we fry the crackers, the middle part blow up! We conclude that there is air in it when we do the crackers.  So during the last bits, we tried to squeeze the air out.

What I'm most fearful will be the blow up part is full of oil.... OMG! Because I had one in our first batch. Luckily the rest, there isn't. Phew... Though is blow up but no oil stays in it. I'm so lucky. 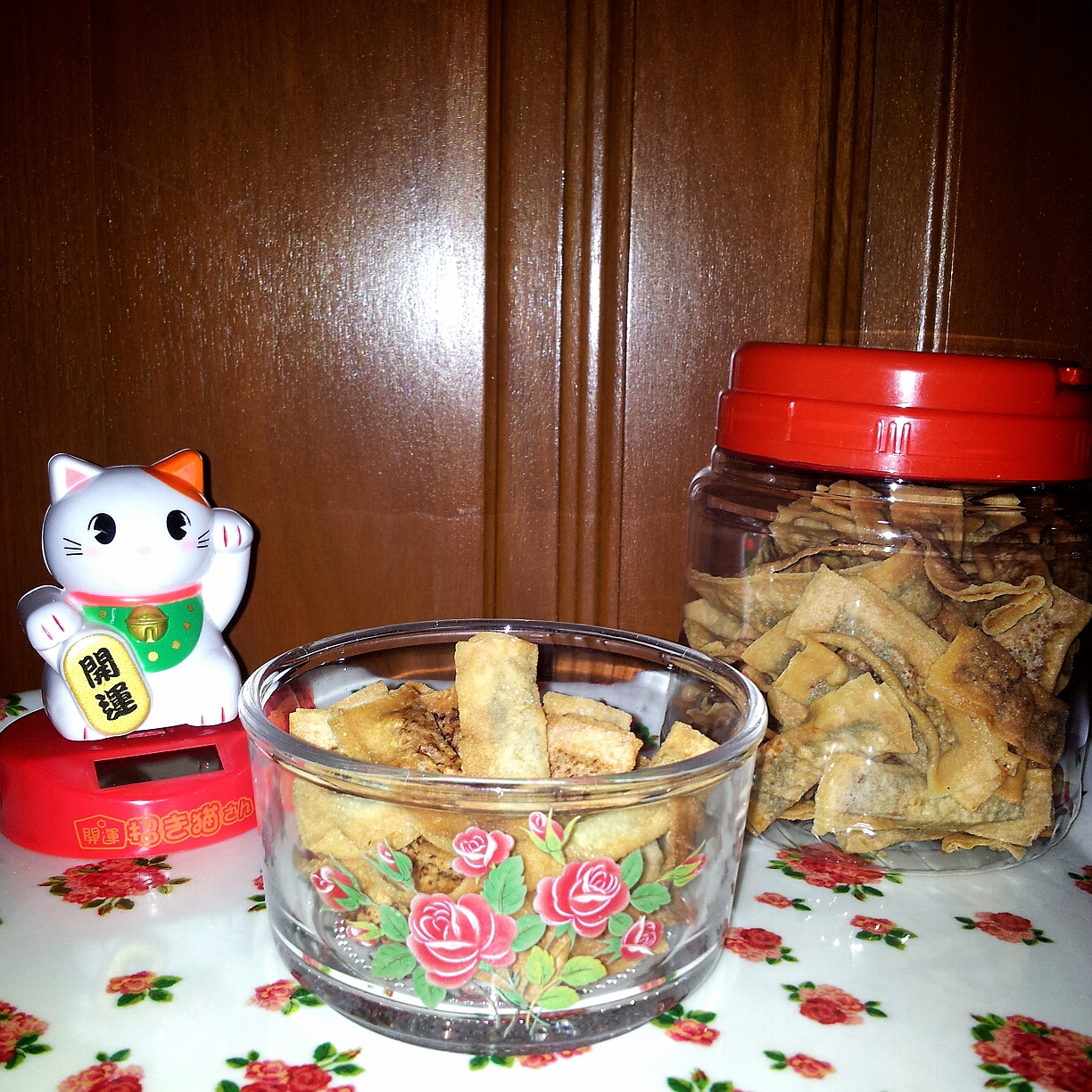 So here I present to you my final product, seaweed crackers. Damn it. Looks out of shape and some near charred ones. Kaoz... I still dare to present here and in Instagram. Freaking thick skin. But peeps, come on. This is my first attempt. Give me some encouragement. So freaking demoralized actually. But I'm not gonna give up.

I'm gonna use a eggless popiah skin. And change the type of seaweed. And also use Happy Call pan to do it!

I will keep improving till one fine day, I can earn a little from it. Good luck to me okay?

Thank you for reading.