The Dōngzhì Festival or Winter Solstice Festival (Chinese: 冬至; pinyin: Dōngzhì; literally "the Arrival of Winter") is one of the most important festivals celebrated by the Chinese and other East Asians during the Dongzhi solar term (winter solstice) on or around December 22 when sunshine is weakest and daylight shortest. It occurs on Friday, December 21, 2012.

The origins of this festival can be traced back to the yin and yang philosophy of balance and harmony in the cosmos. After this celebration, there will be days with longer daylight hours and therefore an increase in positive energy flowing in. The philosophical significance of this is symbolized by the I Ching hexagram fù (復, "Returning").

Traditionally, the Dongzhi Festival is also a time for the family to get together. One activity that occurs during these get togethers (especially in the southern parts of China and in Chinese communities overseas) is the making and eating of tangyuan (湯圓) or balls of glutinuous rice, which symbolize reunion. Tangyuan are made of glutinuous rice flour and sometimes brightly coloured. Each family member receives at least one large tangyuan in addition to several small ones. The flour balls may be plain or stuffed. They are cooked in a sweet soup or savoury broth with both the ball and the soup/broth served in one bowl. It is also often served with a mildly alcoholic unfiltered rice wine containing whole grains of glutinous rice (and often also Sweet Osmanthus flowers), called jiuniang.

In northern China, people typically eat dumplings on Dongzhi. It is said to have originated from Zhang Zhongjing in the Han Dynasty. On one cold winter day, he saw the poor suffering from chilblains on their ears. Feeling sympathetic, he ordered his apprentices to make dumplings with lamb and other ingredients, and distribute them among the poor to keep them warm, to keep their ears from getting chilblains. Since the dumplings were shaped like ears, Zhang named the dish "qùhán jiāoěr tāng" (祛寒嬌耳湯) or dumpling soup that expels the cold. From that time on, it has been a tradition to eat dumplings on the day of Dongzhi.  Old traditions also require people with the same surname or from the same clan to gather at their ancestral temples to worship on this day. There is always a grand reunion dinner following the sacrificial ceremony.  The festive food is also a reminder that we are now a year older and should behave better in the coming year. Even today, many Chinese around the world, especially the elderly, still insist that one is "a year older" right after the Dongzhi celebration instead of waiting for the Chinese New Year.

And so in Singapore, how do we celebrate this annual festival? For me, our family will just have a simple dinner at home, with few dishes like prawns, mixed vegetables, soup and bought back from shop is the braised duck. We specially cook chicken rice but real easy to cook. Buy the paste from supermarket, put in pandan leaves for fragrance, some chicken meat and that's it. Yummy... Taste real good and that is our dinner on Winter Solstice Festival.

Next will be Tang Yuan (glutinous rice balls).  Those ready made glutinous rice balls which u can find in supermarket usually comes in three flavours (which is what I know of): sesame, red beans and peanuts. I personally like sesame though is kind of sweet. But is not as if u gonna have it everyday.

So now, let me tell u what I have a week before Winter Solstice Festival on 21 Dec 2012.

This is my first time having Mr Bean's glutinous rice balls. $2.20 a bowl (If I'm not wrong) and there is 4 rice balls in it. Okay basically it is a bowl of beancurd with 4 rice balls of 2 flavours, peanuts and sesame. My mum finds it weird combi because usually glutinous rice balls accompany with sweet soup but not beancurd. But is okay for mi. Quite unique combi and is a healthier choice too. Why not? 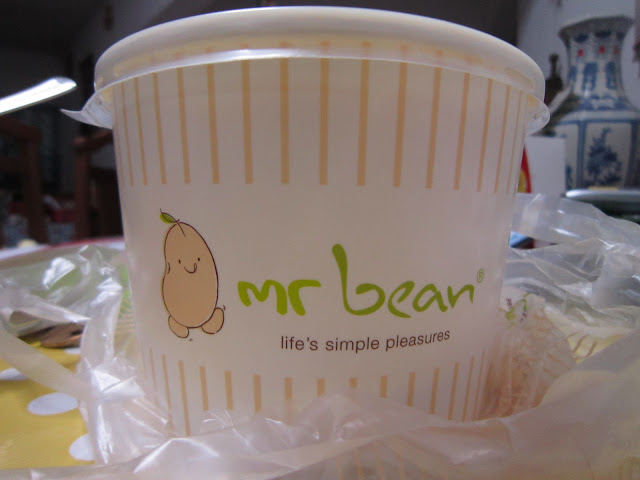 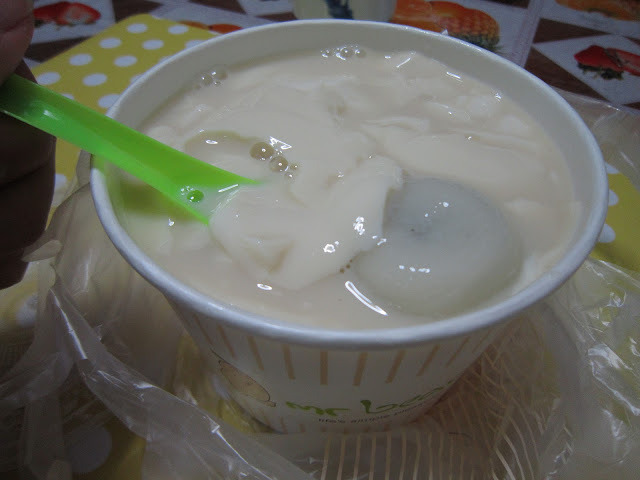 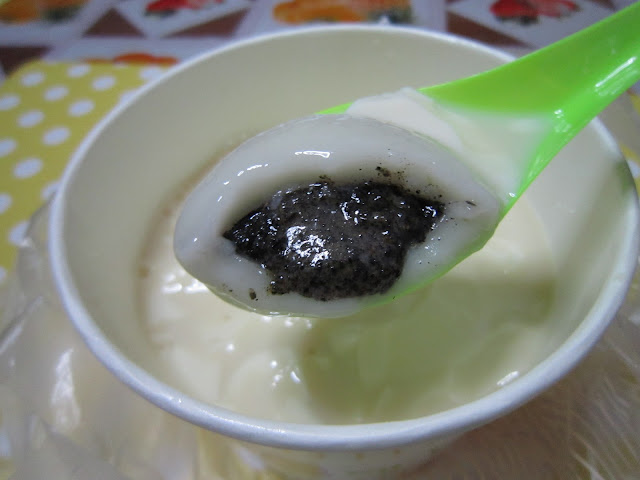 What u have just saw above is sesame flavour. This is how it looks. Actually it tastes like sesame paste.  Do u know that sesame paste is nice too?  Should try it. Can get it at supermarkets. Easy to cook because just put e pack of paste powder in the boiling water and let it cook. Okay back to the topic.

Then like 2 days before 21 Dec 2012, my dad did a red bean soup version of Tang Yuan. What he did was pound the red bean to bits like powder form just for the soup. It takes a bit of work ok?  But it tastes real good. 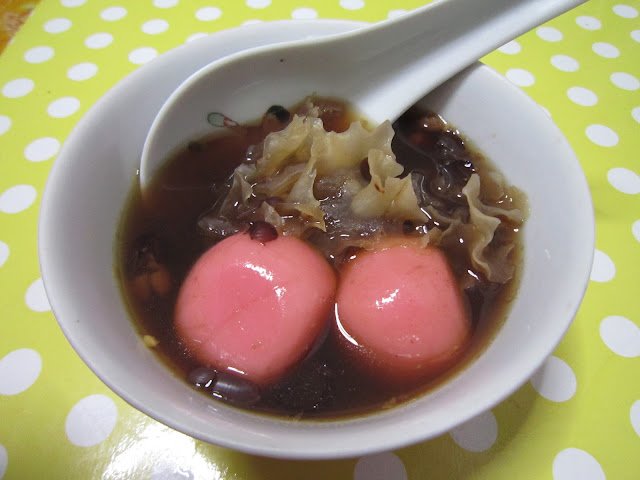 The red bean soup is a lighter version, which I actually like those a little thicker type and the rice balls a smaller version. That is perfect!  But this is good too. There is red bean and snow fungus. Splendid! And those ready made glutinous rice balls bought from supermarket. This year, my mum is not going to home made the rice balls. Very tiring for her because she is doing everything on her own. So this year is all supermarket purchase. The whole thing about Tang Yuan is that it is also a dessert that can be eaten anytime.

So on the actual day... no snow fungus but lotus seed (lian zhi) and the rest is same old stuff.  Doesn't matter. It is damn tasty.  Not very sweet and even my guy likes it. I took the below without rice balls. I think u peeps will get a bit bored seeing rice balls. But this festival is all about glutinous rice balls. 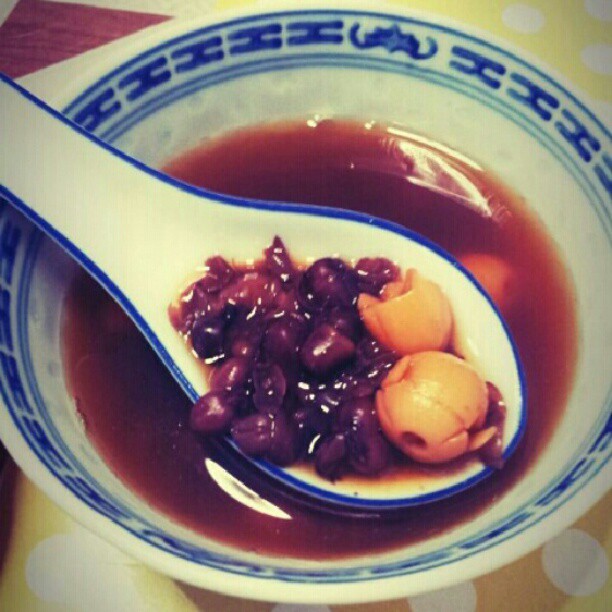 So the once a year festival is over. U know what? It means Lunar New Year is coming... It is just a month plus away from now. The whole of January 2013 is about Lunar New Year. I am damn very sure.

Everyone... Happy Winter Solstice (one day late but never mind)!