You probably have read my post on Nice Cheap Food in NUS and if you haven, please click on the link and read. You are missing good food that is way better than those outside, even at hawker centre. It is really comparable. The canteen is at Faculty of Science, NUS. Actually after that post, I got lots more of them to show you guys but probably in the next post because in this one, I'm gonna talk about the food at SIM. How can I just introduce my workplace's nice and cheap food and not doing anything for the place I study my Bachelors right now? Badass. Though is not as cheap as NUS but at least is cheaper than outside food court and food centre or on par, or whatever. Okay! Lets get started.

Well the canteen is situated at Singapore Institute of Management aka SIM, Block A, Level 3 near to Popular Bookstore, opposite Mega Bites. It is sort of small and seats are way limited to, knowing that on daily basis, tonnes of students are coming for classes and sort. And sometimes you can find inconsiderate humans chope seats here and there, or just to let their bags and stuff to chope a seat for comfort. WTF! It is operated by Foodfest, if I'm not wrong (because I saw their staff wearing that uniform). Because it is just beside Ngee Ann Polytechnic, the student there also come over for food. Aiya, you go our canteen, I go yours too. They have more variety like fastfood too. Too bad. What we have is just this foodcourt, another one at basement which is an eatery, Souperlicious and Mega Bites. So dull!

My latest addiction! I think because I feel that since I'm graduating soon by end of year and I'm not gonna come back again unless for 2 reasons:

If not, I can't find a reason why I want to come back.  Okay back to my food. 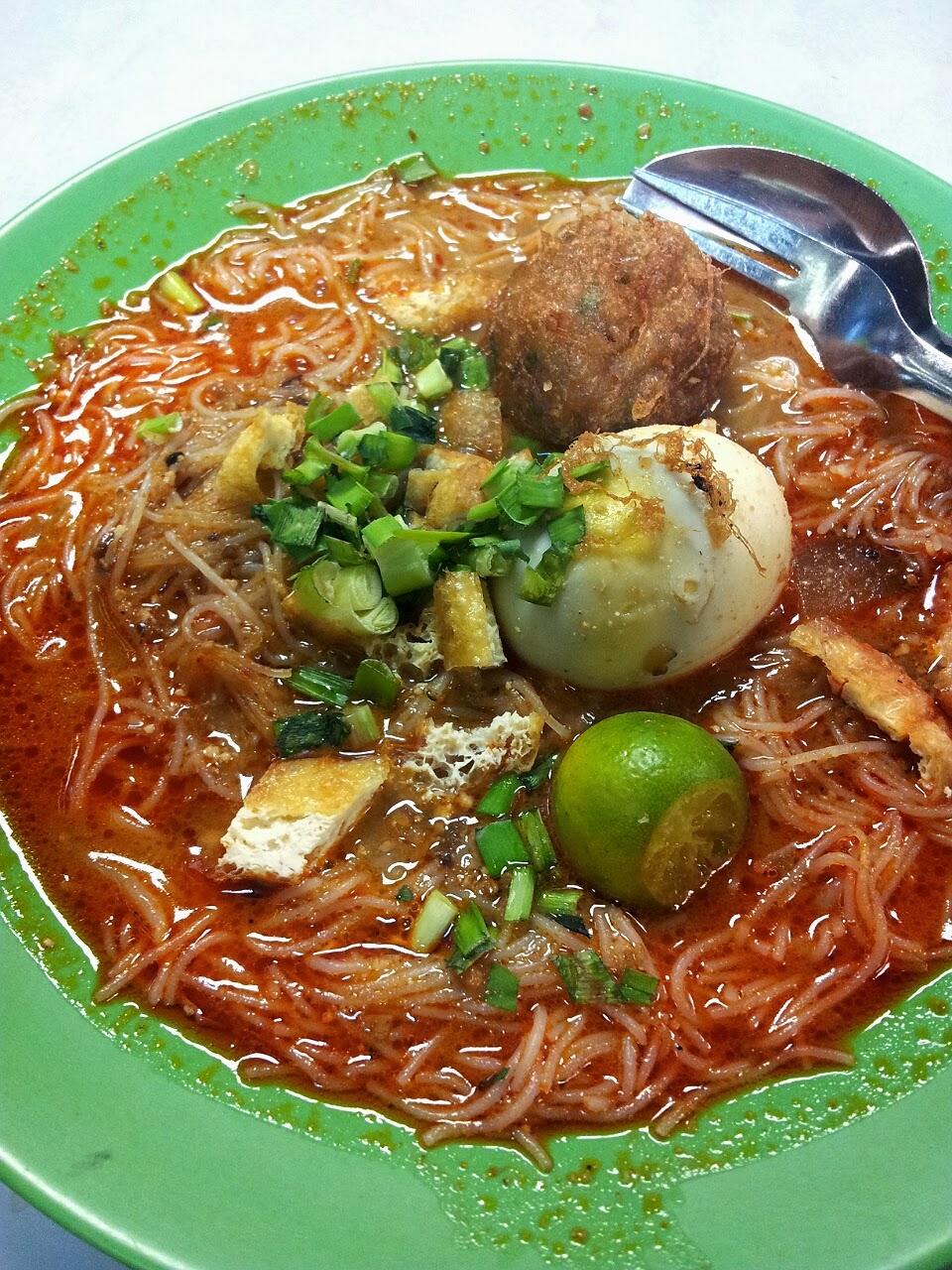 This is Mee Siam at $2.20 (student price) + $0.50 for a Bergedil. How can you go wrong with a Bergedil? You definitely won't. My guy is the one who influenced me into eating Bergedil. He is not a Chinese but a Dayak. He speaks Malay, Chinese, English and dialects. WTF! So Malay food is also quite common in his diet, be it outside or at home.

Back again on food. This Mee Siam is very tasty but also a little salty (if I'm not heaty). Probably I never squeeze that lime in which maybe can minimize the saltiness. But I love it. Simple yet enough to fill my stomach. And Bergedil also no horse run! Small but enough to satisfy your taste bud. I think I love POTATO! 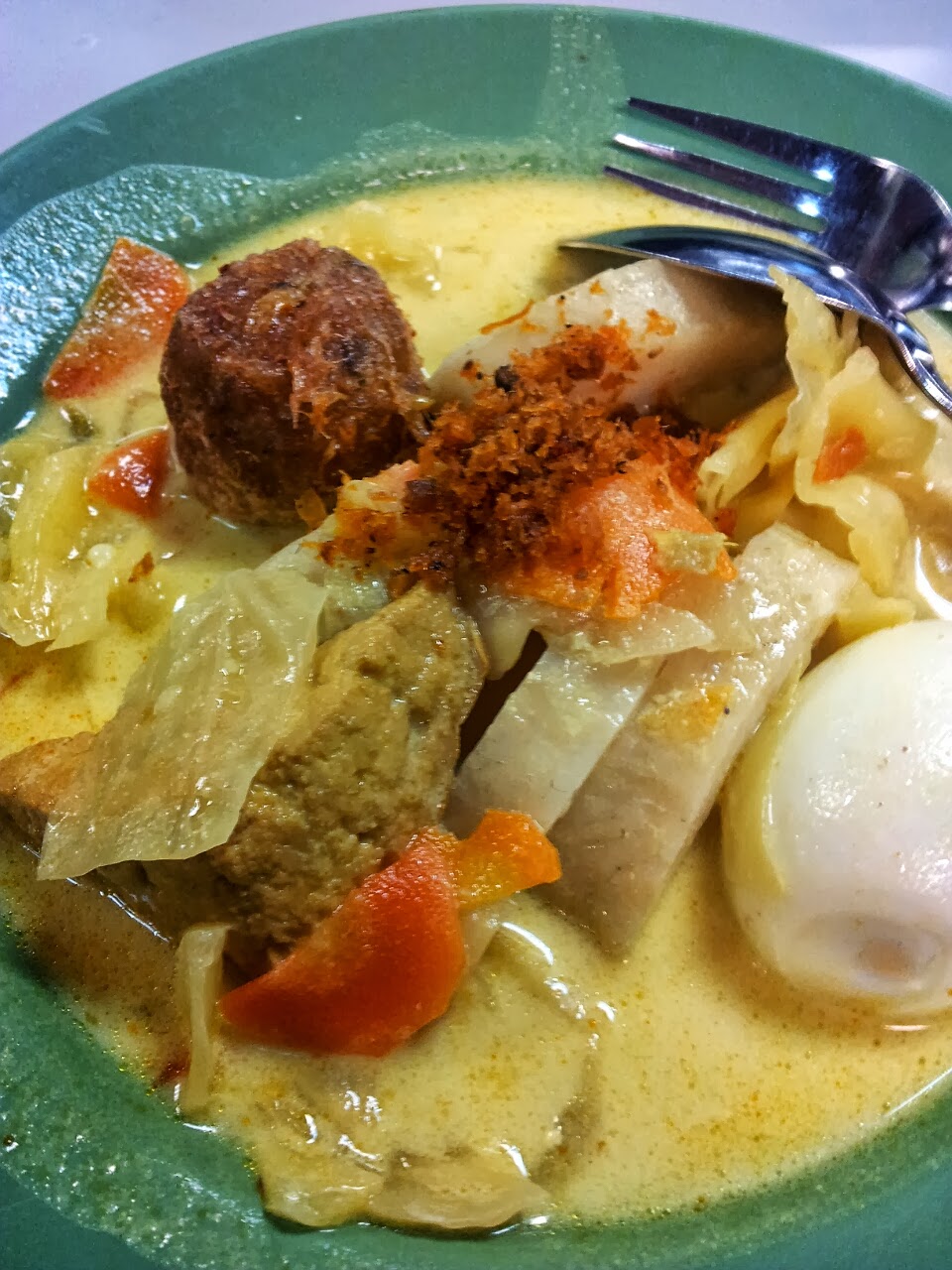 Ta-da... This is Lontong at $2.20 (student price) + $0.50 for Bergedil. I have been wanting to have Lontong for quite awhile and finally I'm done deal. But the taste is not up to my expectation. The flavour of soup base is not strong enough. Plain Jane. And the rice is not fresh. Must have put outside for quite awhile. So hardens on the outside skin. But I'm not giving up in search for the best Lontong. Let me know if you have any recommendations. 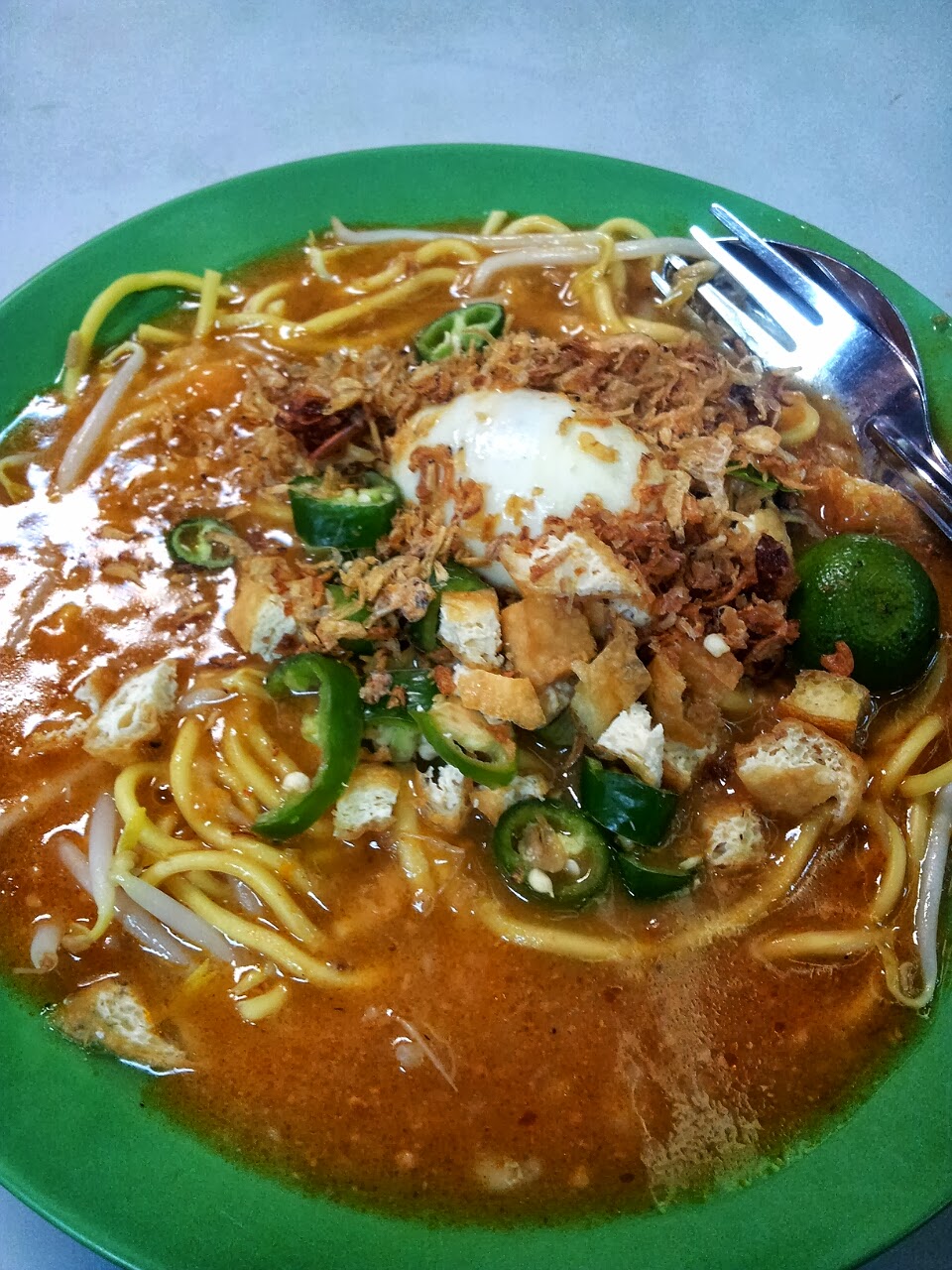 OMG!!! I just can't get enough of Mee Rebus at $2.20 (student price). Surprise right? There is no Bergedil. Wah... will run out of budget for dinner if I always have Bergedil. This Mee Rebus is delicious. But minus that green chillis which I don't like. I show my friends this peekture and they ask why I never put black sauce. Excuse me this is nice enough. Anyway depends on how individuals want. Wonderful!!!! It makes me miss that Chinese stall at Maxwell that sells mee rebus (my previous company was there). They use big ikan bilis. The ikan bilis is so nice and crunchy. Ya salty too. My guy don't like. Hmm... I'm too a salty person. Damn it. Again I never squeeze the lime given. Always and forever. 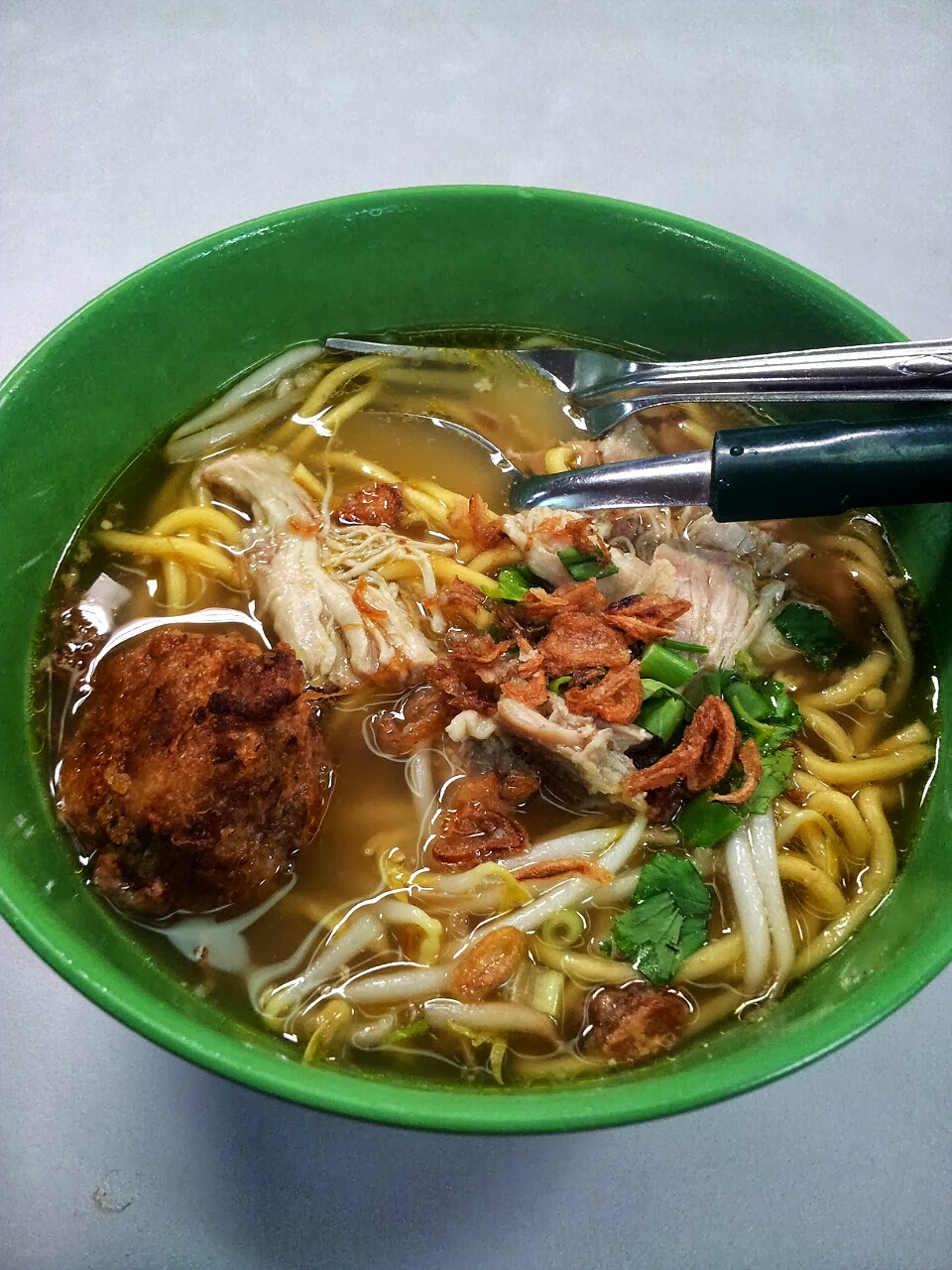 Last but not least, Mee Soto in the house for $2.20 (student price). Spot Bergedil? Wahahahahha.... Yum yum... The chicken broth is awesome and the absorption of the chicken broth into yellow noodles is just as good. Tasty. You can never go wrong too when using chicken broth for your cooking.

This stall also sells Nasi Lemak and finger foods. I saw them selling pretty tarts, samosa and so on. Reasonably priced, as compared to outside.

Okay I need to clarify. This stall is not just selling Ban Mian but all sort of handmade noodles. I did a review on the 4 different types of noodles (they have lots more) at +OpenRice Singapore but I just do a consolidation of the food I had at SIM. 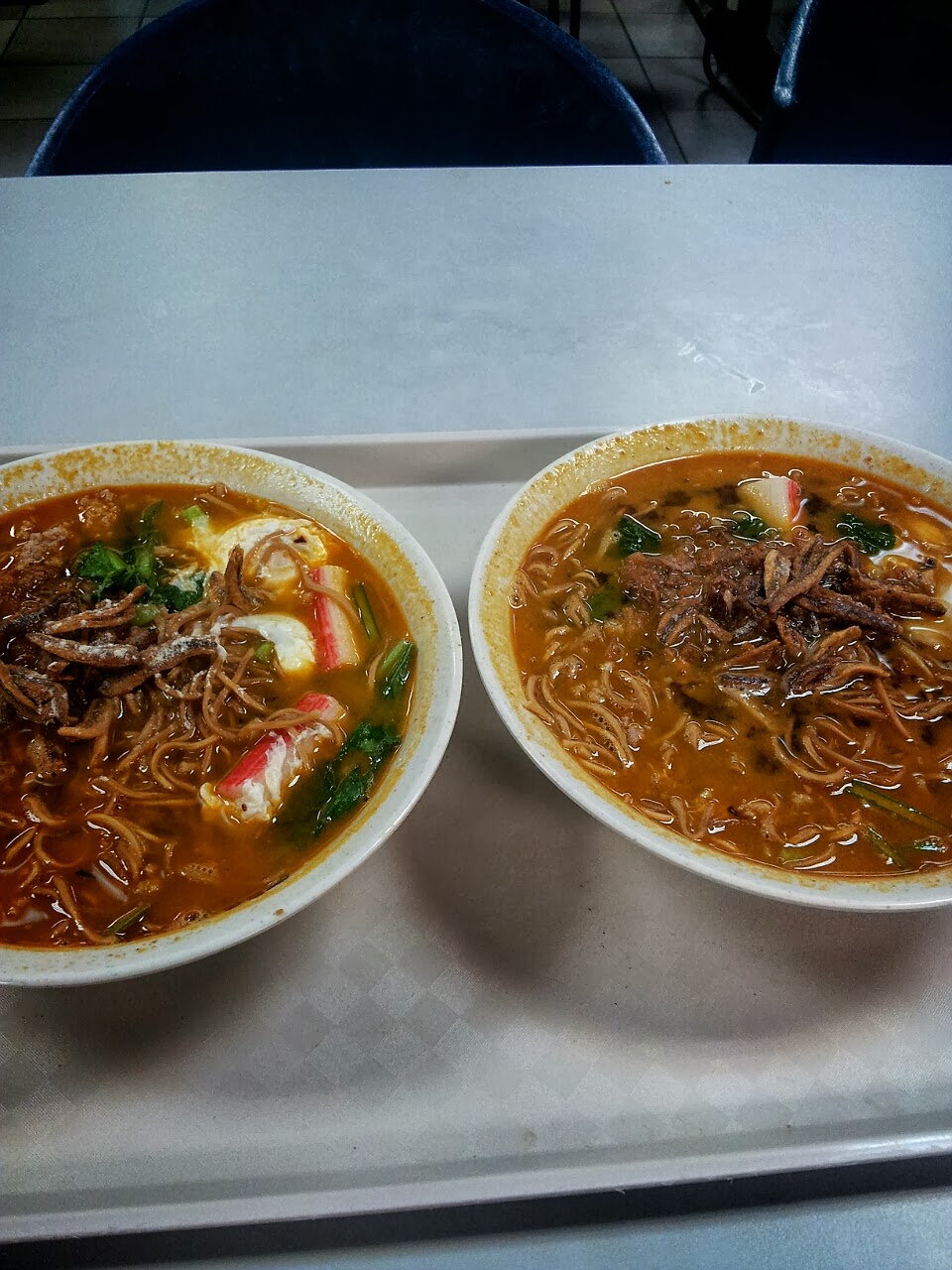 Take a look at this!!! Tom Yum Yee Mian at $3.20 (or $3, I can't remember). Awesome! Told you all in other food reviews that I'm really a noodles person. I can take any noodles. This stall always had queue whenever I arrived the canteen aka foodcourt. Somehow fast enough. Sells gyoza too. You can have a set that includes a bowl of noodles + gyoza for $4! Isn't that a good deal? I think it is. Take a look at the following peekture. 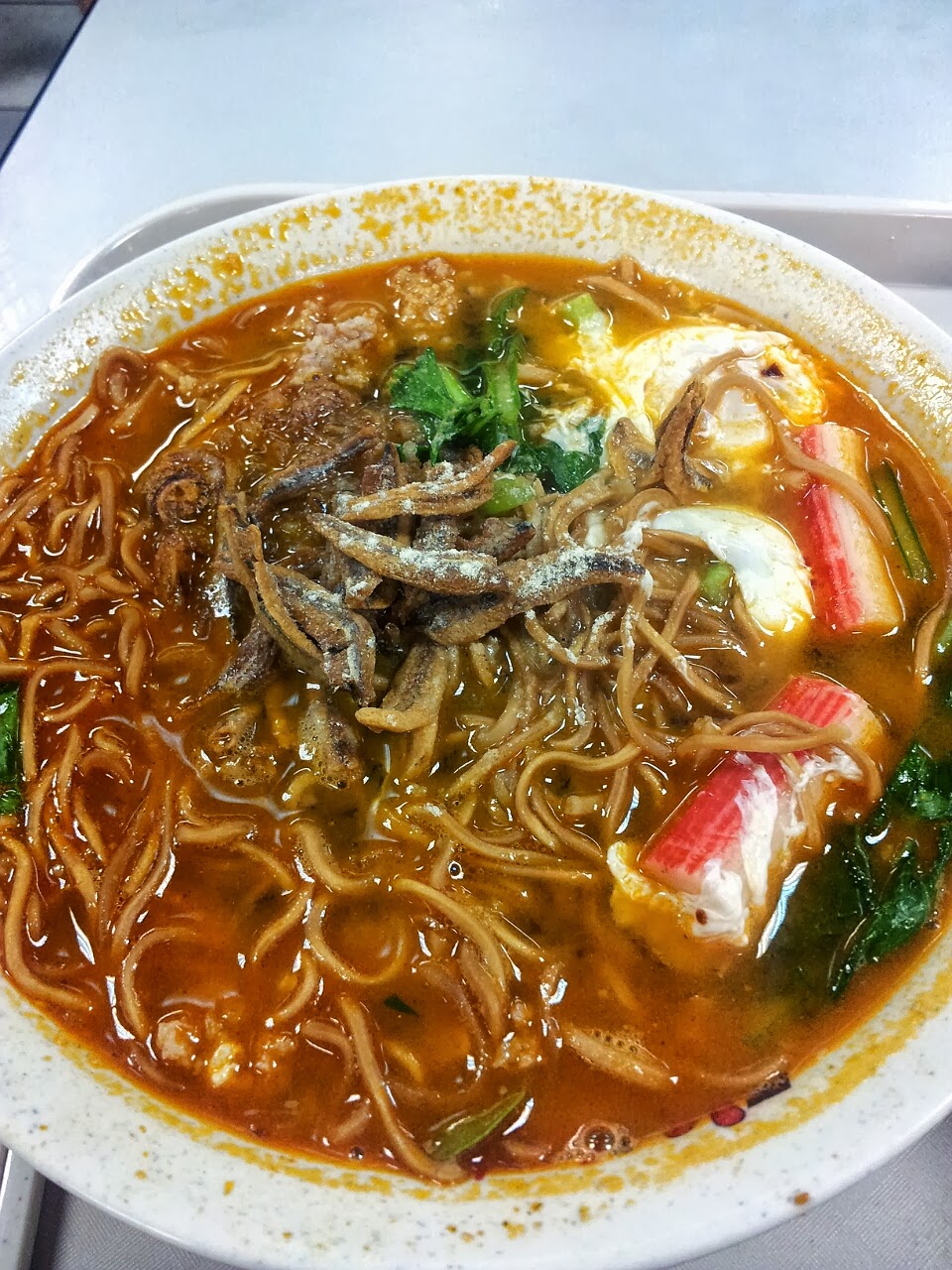 Take a look. Got crabstick, egg, my favourite ikan bilis, veggie and minced meat. I cannot get enough of this. Another version of their tom yum will be this: 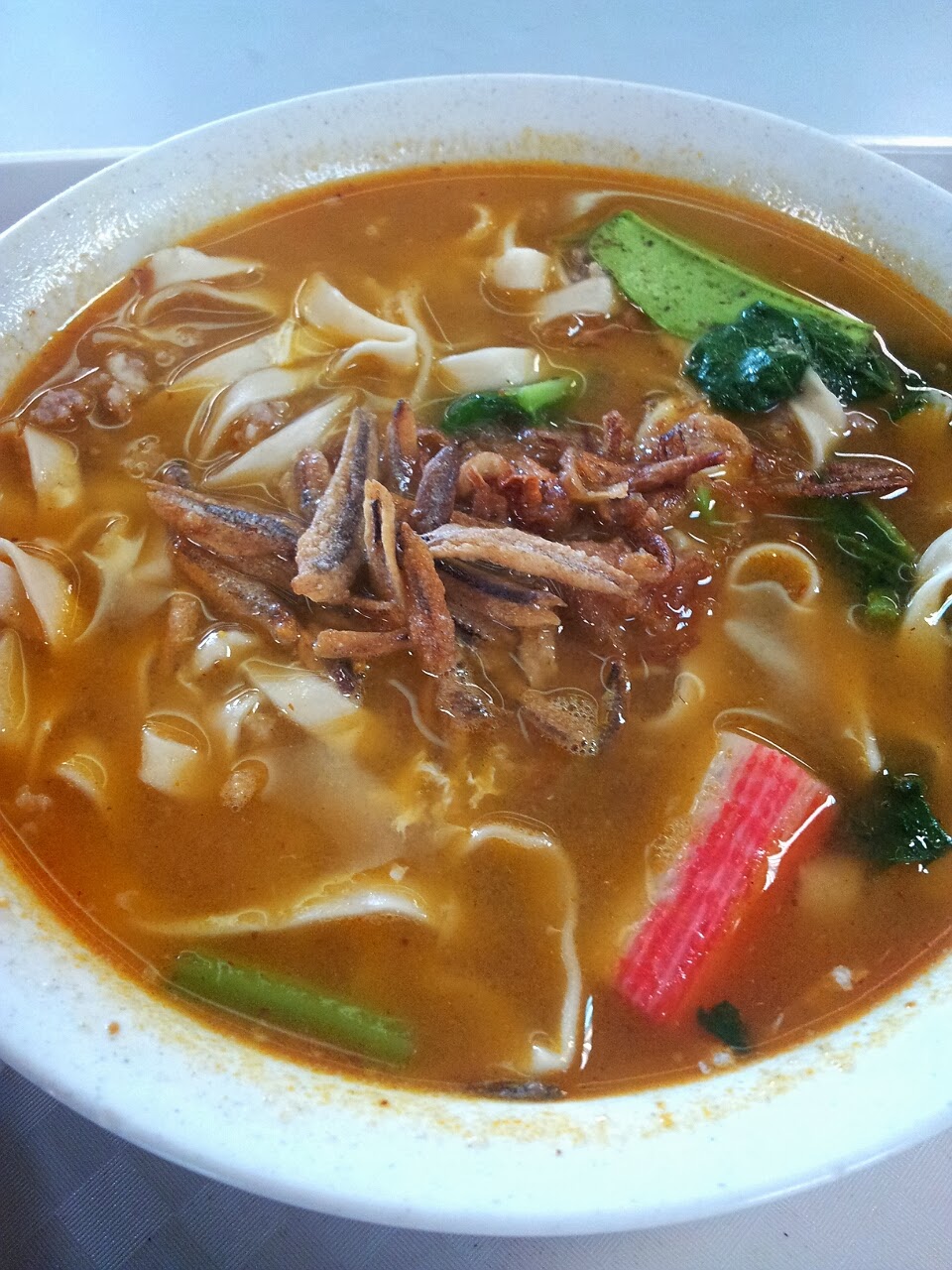 Yes you are right! Tom Yum Ban Mian at $3.20. Everything is the same except is BAN MIAN! The noodles is smooth and overwhelmed by the soup base. Can you resist that, esp Tom Yum lovers? Authentic or not, we are so used to Singapore style of Tom Yum. 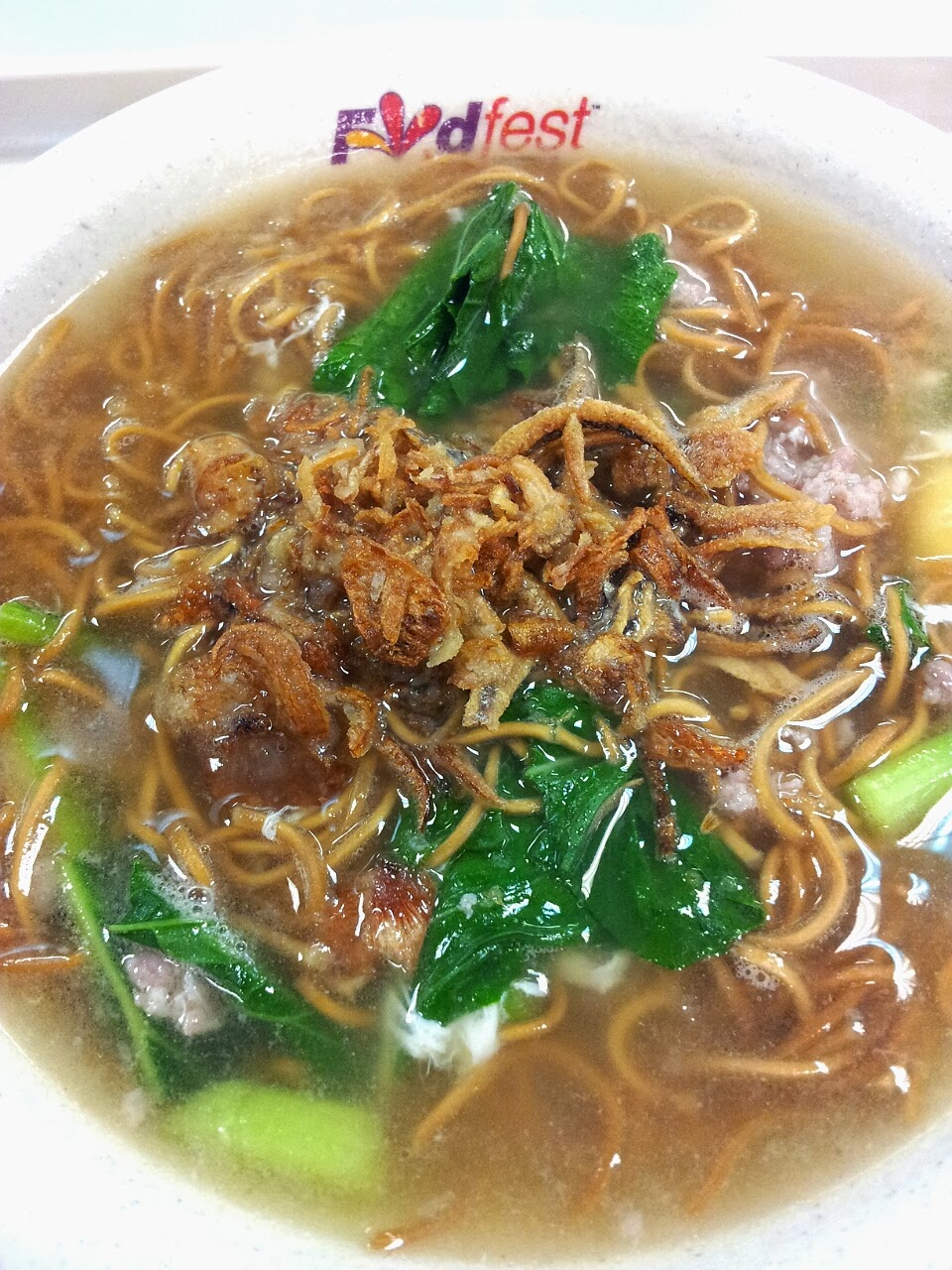 Okay this is their normal Yee Mian at $2.70/$2.80 (I really can't remember). Excuse me, student price okay? Taste good too. The soup is definitely the essence to their awesome noodles menu. They also have Zha Jiang Mian, You Mian and so on.

Seriously, I can't help it. I really must complain about this stall. This is terrible!!! For $3 of fishball noodles, I got it this way, be it dry or soup: 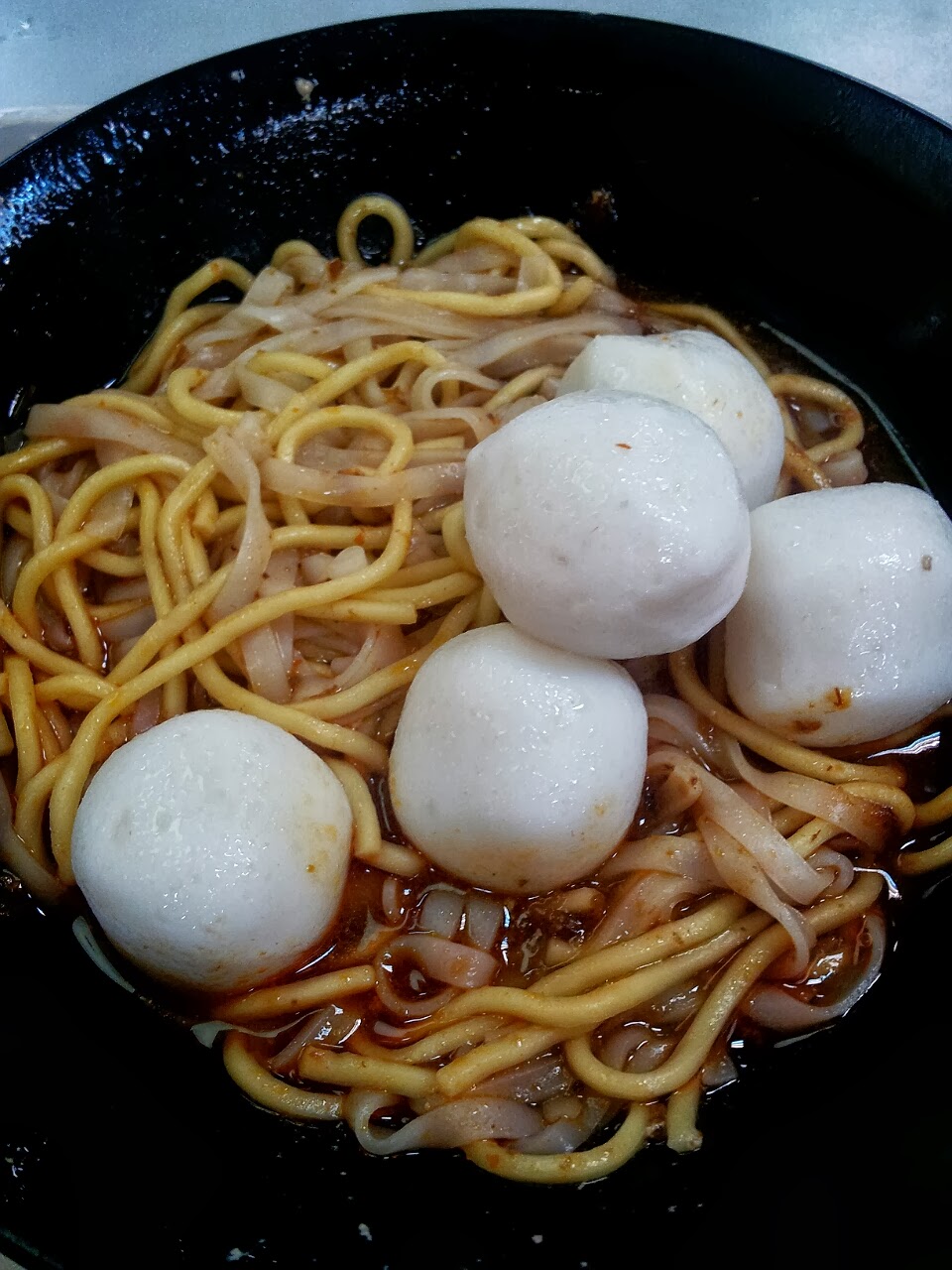 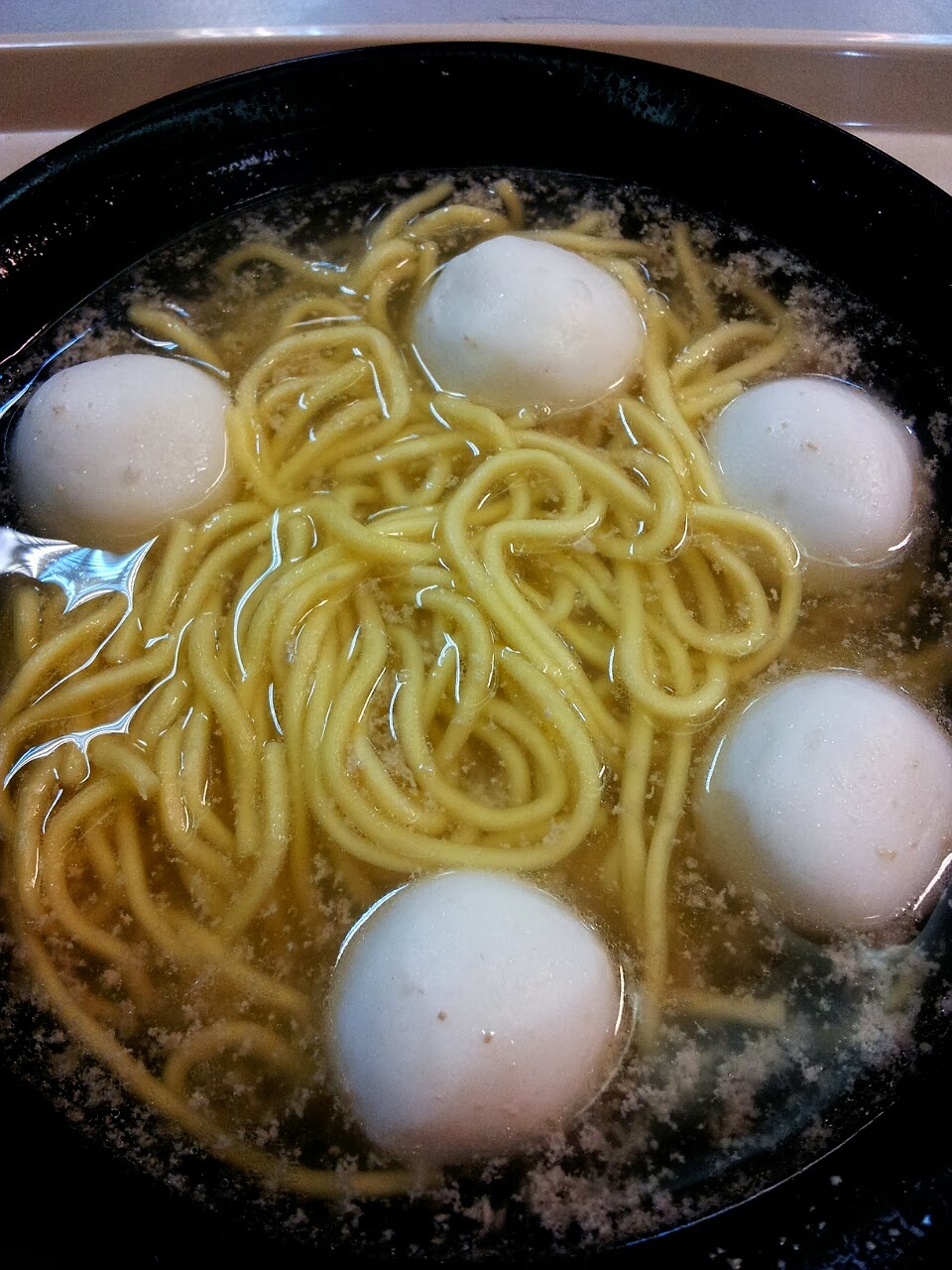 Can you see what is the difference between those sold outside and this one? Utterly ashamed of it! PLAIN JANE DAMN IT! Their fishball noodles is really fishballs + noodles (any type you want), dry or soup. WTF!  Outside one, maybe a slice of veggie, fishcake and some minced meat. *spit* Hate it! I can't deny that their fishballs are fresh and springy but EXCUSE ME, THIS IS RIDICULOUS! I'm so angry about this till today. Unless I don't feel like having anything from the above 2 stalls, this will be my last choice, or maybe not. $2.70-$3.00 for a bowl of this, I think I rather cook Maggi Mee at home. Taste much better. They sell others too but is within the range of noodles, like Xiao Guo Mian, Mee Pok, Mee Gia and so on. TOO FARKING BAD! I love fishball noodles too much to have others!!!

I love Japanese food, esp when it comes to Ramen and Udon. Damn it! Another PLAIN JANE that turn me off. I should have try their bento instead. Their RAMEN IS A NO-NO! 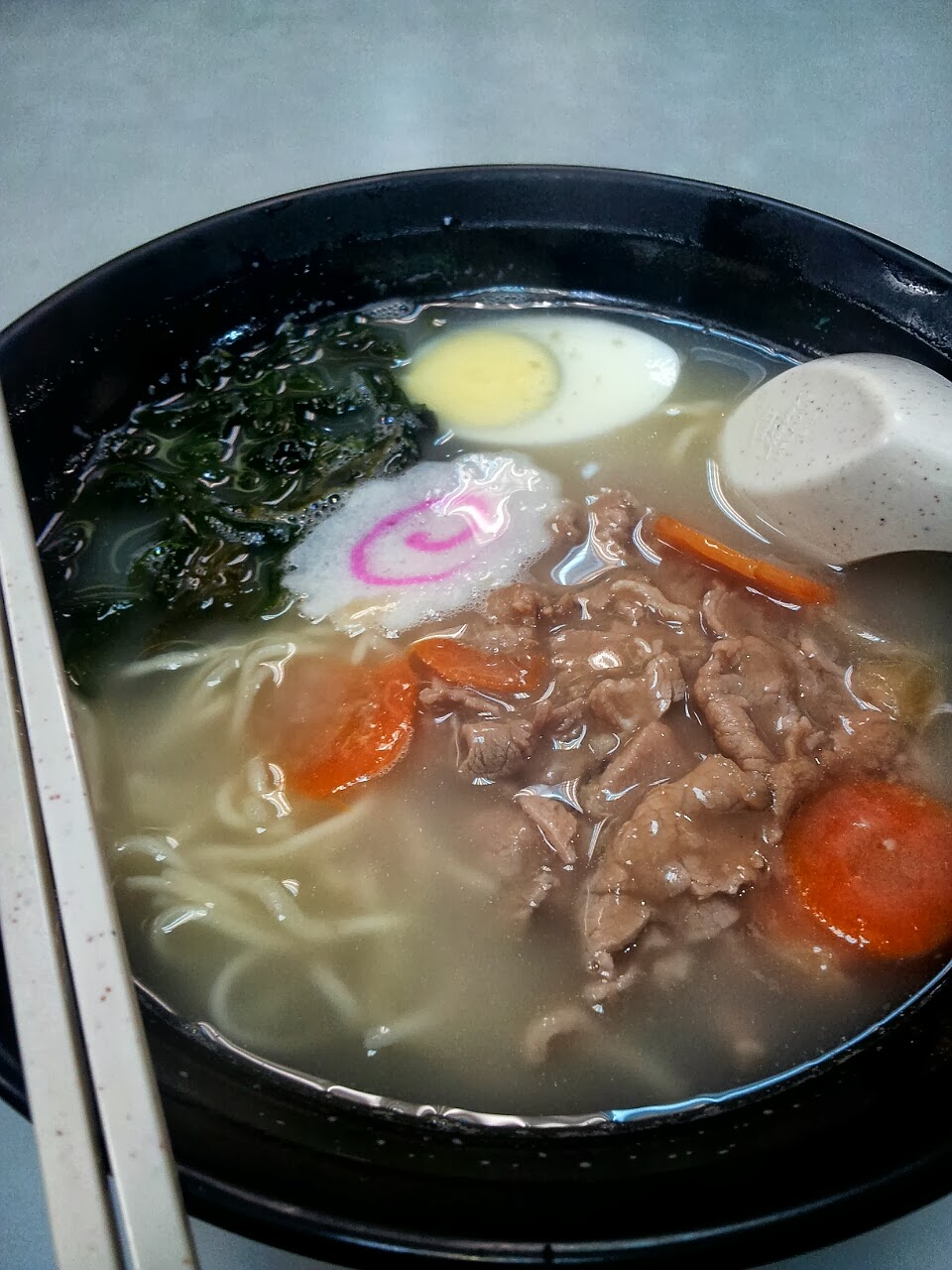 Tasteless stuff. Some beef ramen I had. Forget is it $3 or $4 or $5. Superb not nice! Don't waste money having this terrible stuff. What is good and bad I can figure out, although I'm lousy at it some times but this is DEFINITELY NOT WORTH! I rather you try their bento. No harm. I see my friend having it before.

Seriously their one cup of fruits is overly priced. Are you crazy? $3-$4 for a cup of fruits. Or you mistaken me as non-SIM student? Even outside food court won't sell that ex. Don't believe, you go and check it out yourself at outside food courts. One and only time. And I never go back again for more. I still the students there are quite rich. Or they don't have any choices for fruits and juices? Go Clementi for lunch or dinner lah. Cheaper and nice. Superb angry with this too!

So that's about it. Very little right? I seldom have dinner there. Usually just pop by Mega Bites to buy finger food. That one is also another one. Priced everything so high. Not gonna comment much. Ridiculous.

Start your visual eat here on my blog!