Okay I shall do a revert blogging of my overdue trip in Jan 2017. Because this one is shorter with not much photos, I do it first.

On the 2nd last day of my 5 days trip to the Southern part of Taiwan, I decided to have a thrill ride on the train and also to pay a short visit to Taichung. Taking the 台铁 (Taiwan Railway) was a bad decision because many stops and it took about 2 hours to reach Taichung. Time wasted on the journey. Should have taken one that goes direct or minimal stops. No grumps. For the train thrill yo. Some more we were on Tze-Chiang Express 自強號 which was better fleet of trains as compared to others. Seats were assigned to you. They have other trains which is just like our MRT or their Metro but on railways. Okay anyway, lesson learnt. Don't just casually take up the time slot the counter give. Ask for more options. Oh... stupid stupid STUPID. The result of being cheapo.

So after about 2 hours, we arrived at Taichung Station. The new elevated railway station was not that spacious especially at the platform packed with passengers arriving and departing. More improvements needed though it is still quite new. Opened not long ago.

That is beside the point. I came here hoping that the old ground-level station hasn't been demolished. I wanted to take photos of it because so vintage as seen online. Heard that they might be turning the old station into a museum. I can't wait to go back there again for a proper touring around Taichung. 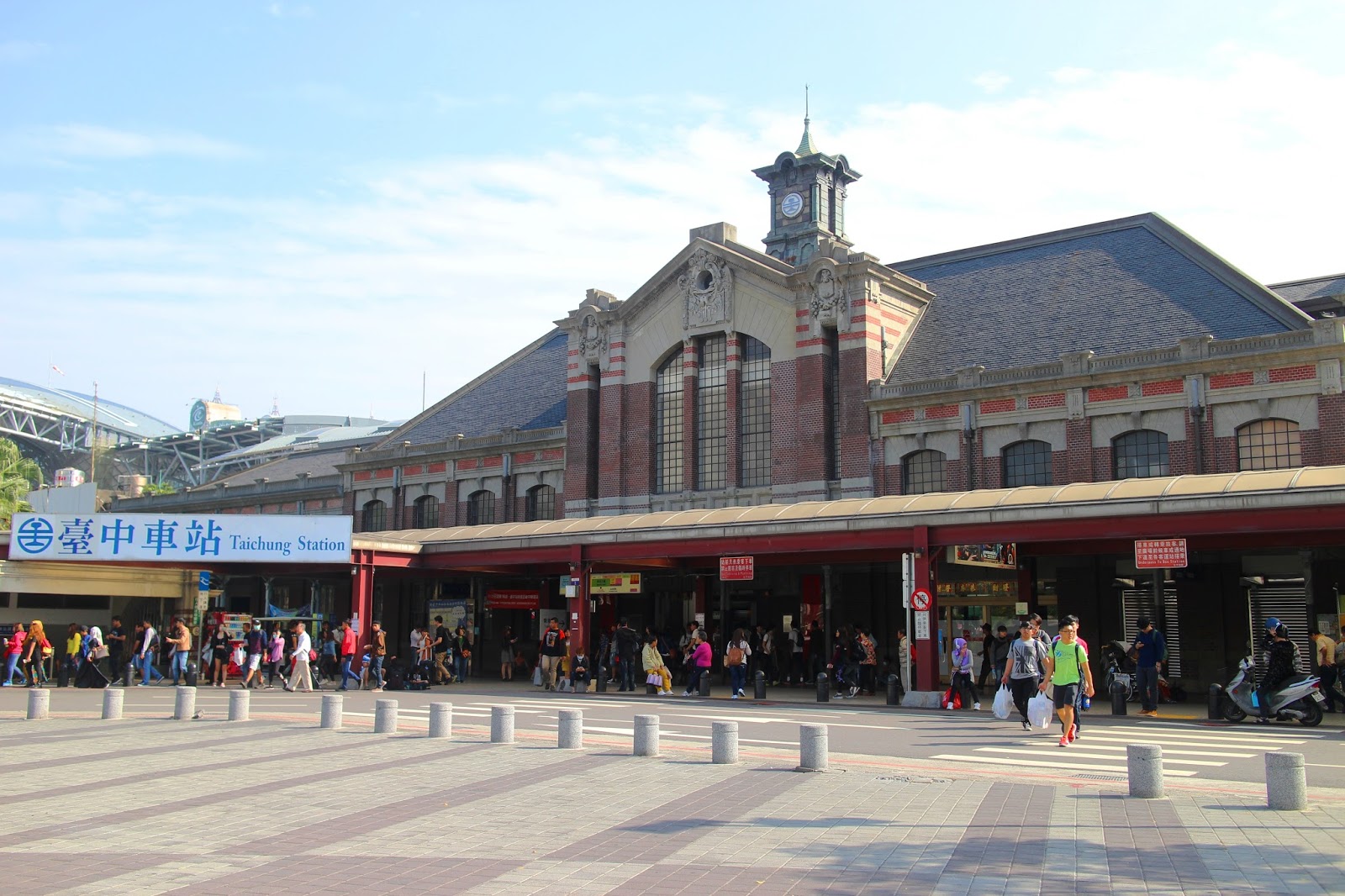 Outside the station on a hot sunny day, we boarded a local cab to Rainbow Village 彩虹眷村. Quite a distance away and cost us about TWD 300. Rainbow Village is a place which Taiwan Government built simple housing for military families when they fled from Mainland to Taiwan back in the 40s. A place for them to live. And this village in particular has its walls all painted with interesting artworks by an old man called Mr Huang Yung Fu a.k.a Rainbow Grandpa 彩虹爷爷. He was there when we visited and managed a photo with him. Lucky me. My trip here was worthwhile. 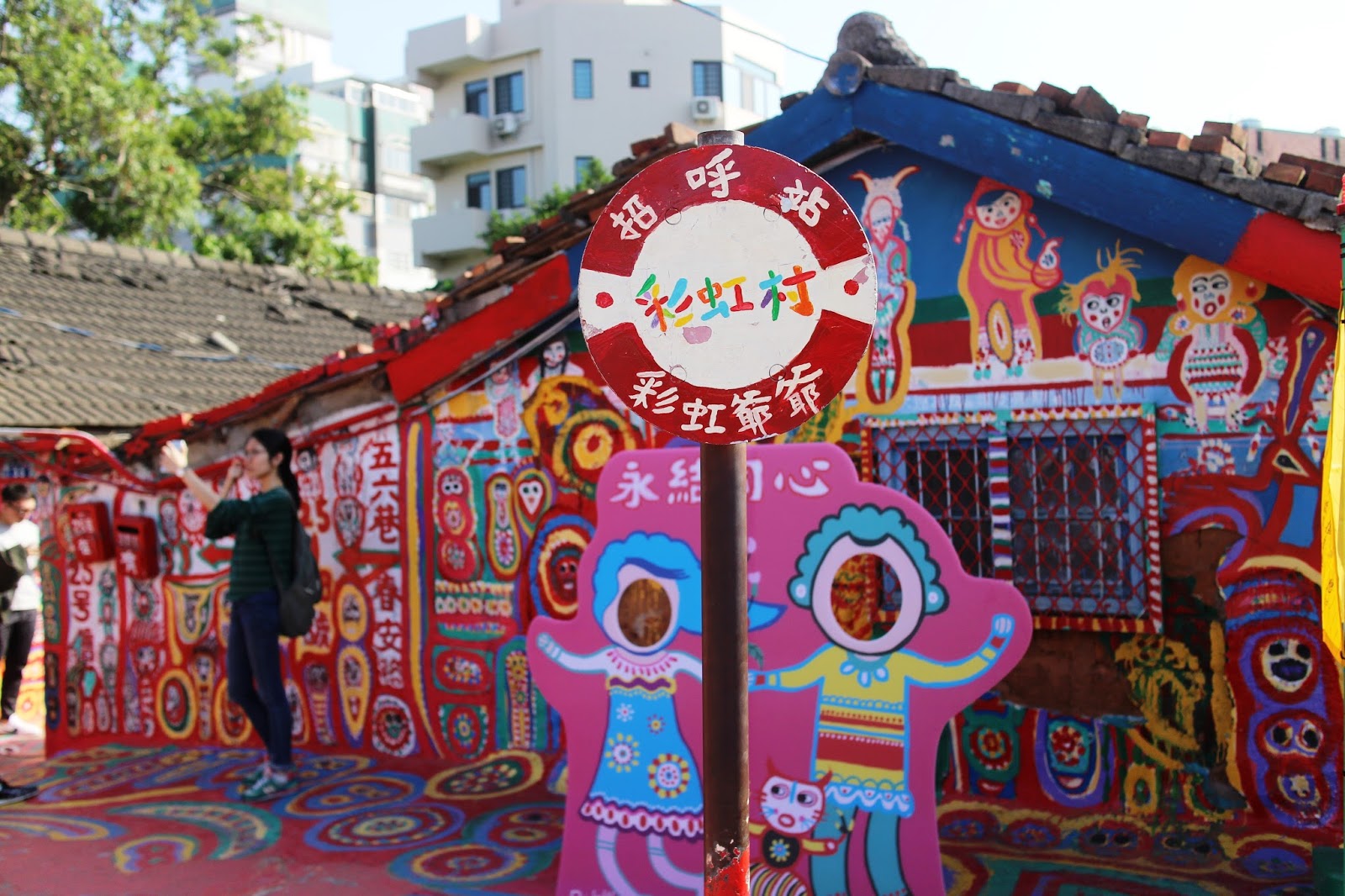 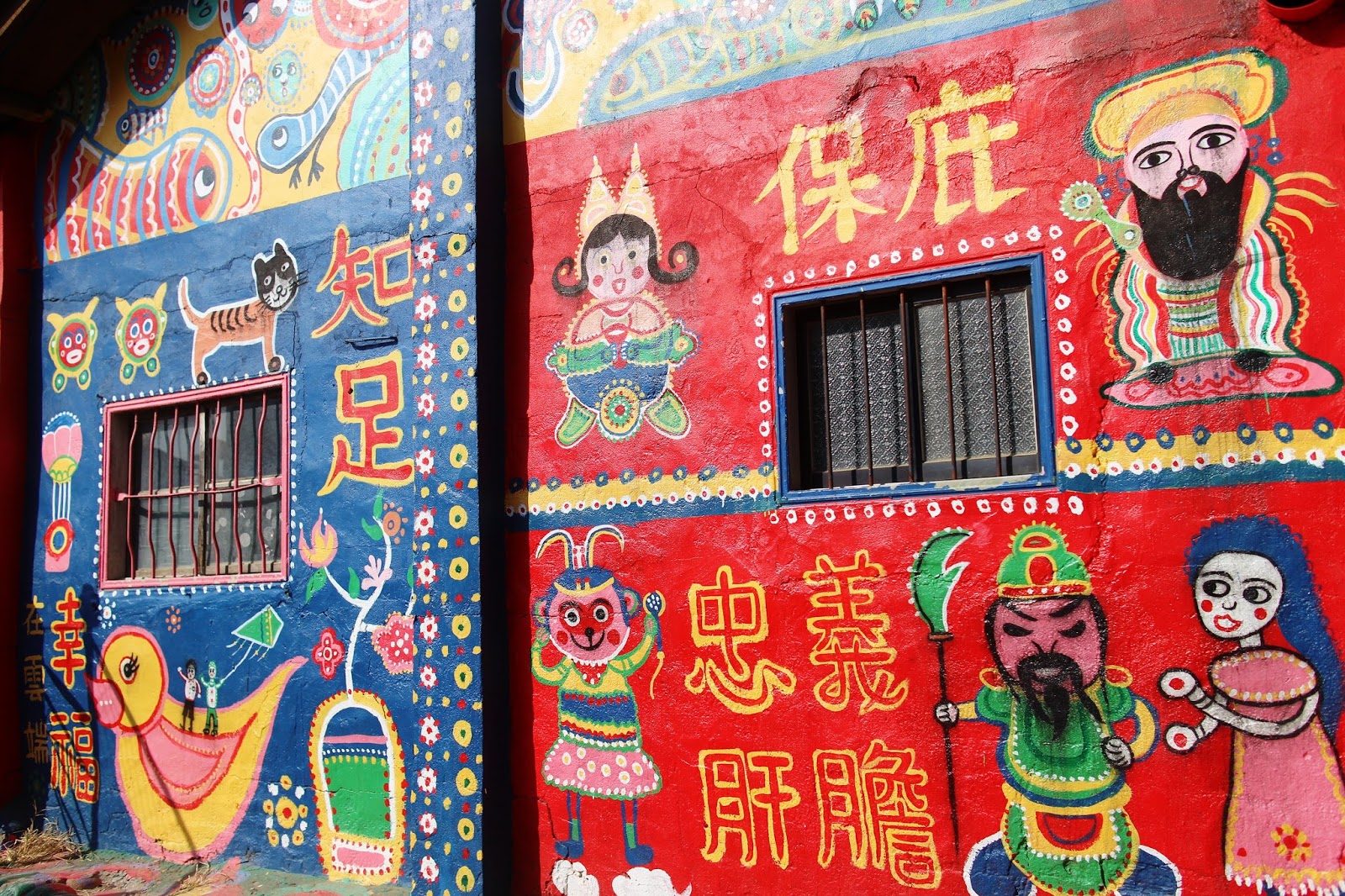 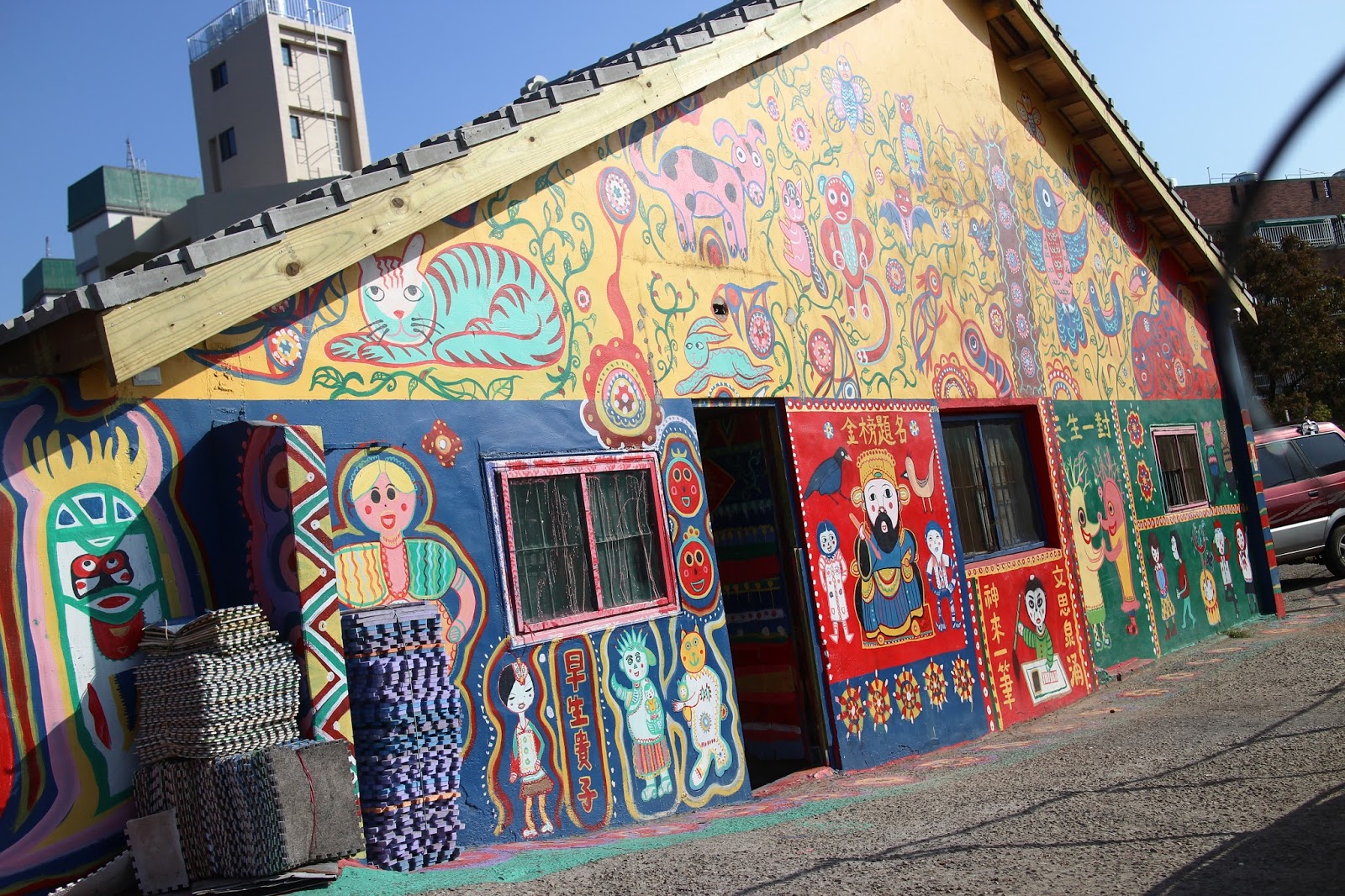 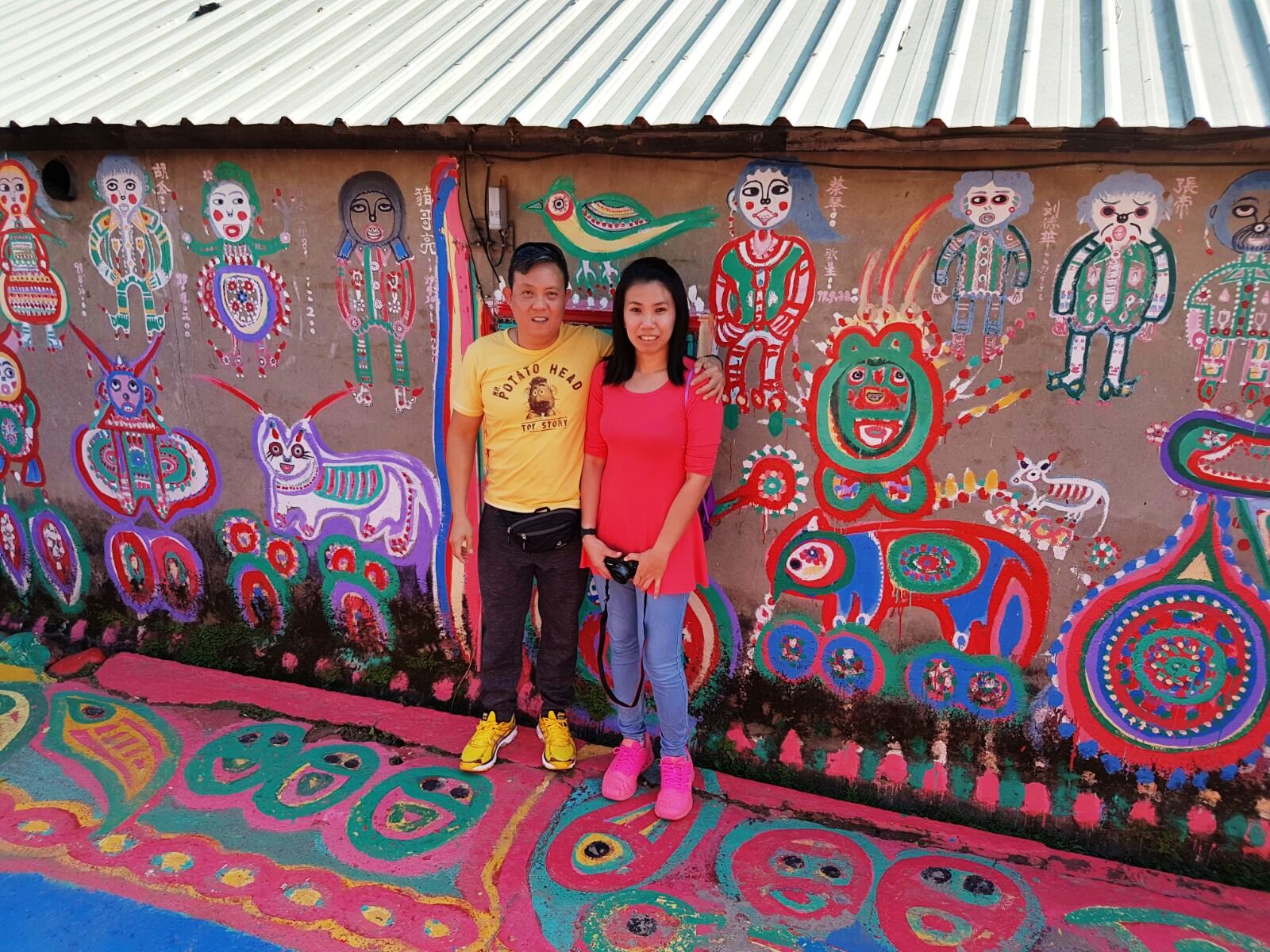 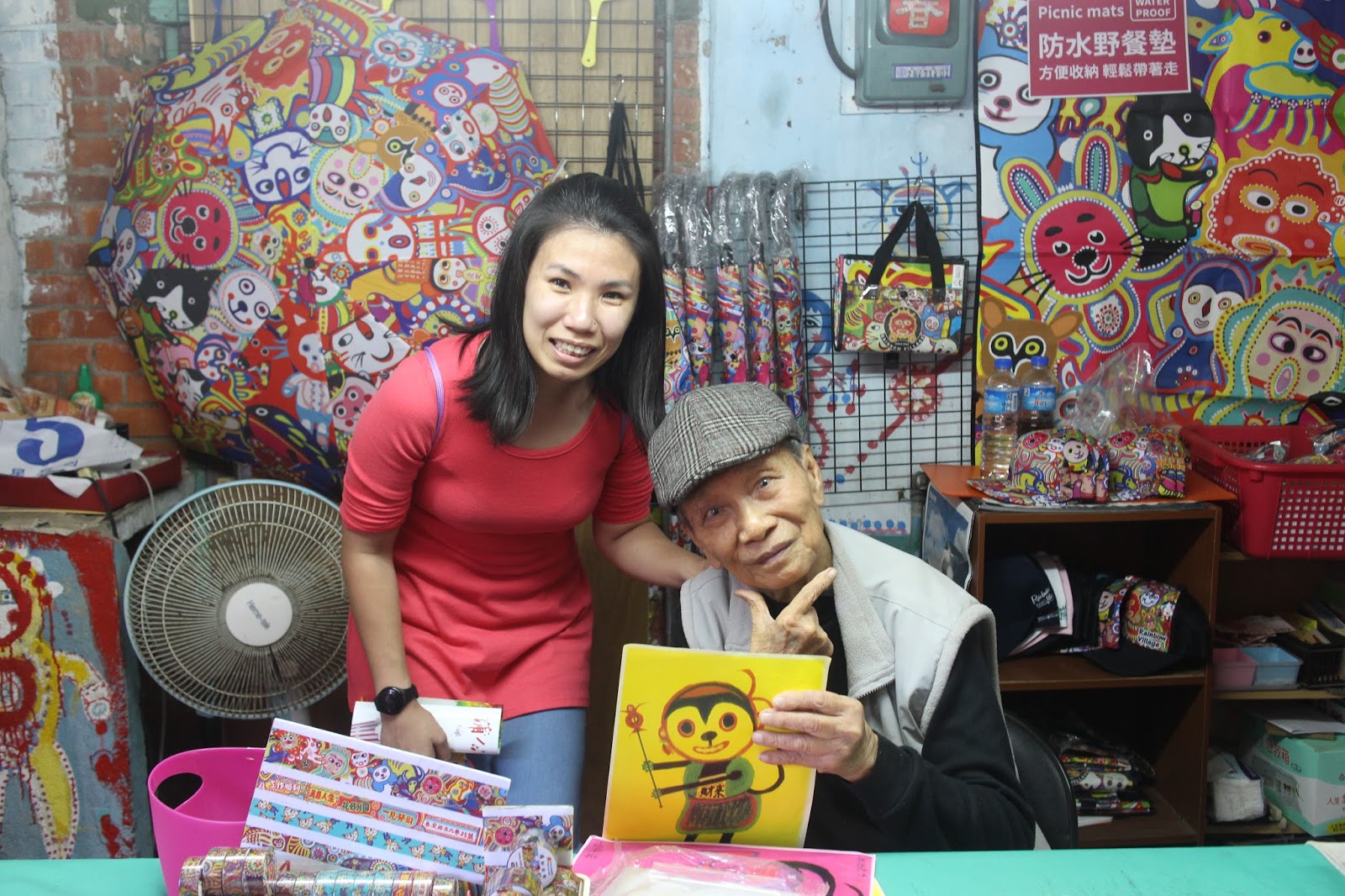 Wasn't in my plan but the cabby recommended this place because the scenery is just so beautiful. Okay one thing about this cabby. He is those local cab driver and also the sort of tour guide driver. There are a lot in Taiwan and I can recommend you the one I hired in another post. Continue. And when we got on the cab for Rainbow Village, he asked if we have other plans after that. Then he recommended us a lot of places but due to time constraint (need to head back to Kaohsiung), so end up with almost an hour trip to this GaoMei Wetland. And because only 3 of us, so we were charged TWD 2000. I find it quite expensive though. Because it was just to GaoMei and then to Taichung HSR station. Whatever.

Then again, this place definitely worth a trip. Superb windy and you got to see those tall windmills. I always wanted to see those windmills in Taiwan and finally fulfilled. No. 9 windmill was introduced to us. I don't know why. Even the cabby doesn't know. All the windmills were just An Instagram-worthy place. Too bad we never stay for the sunset. Heard that it was beautiful and spectacular. 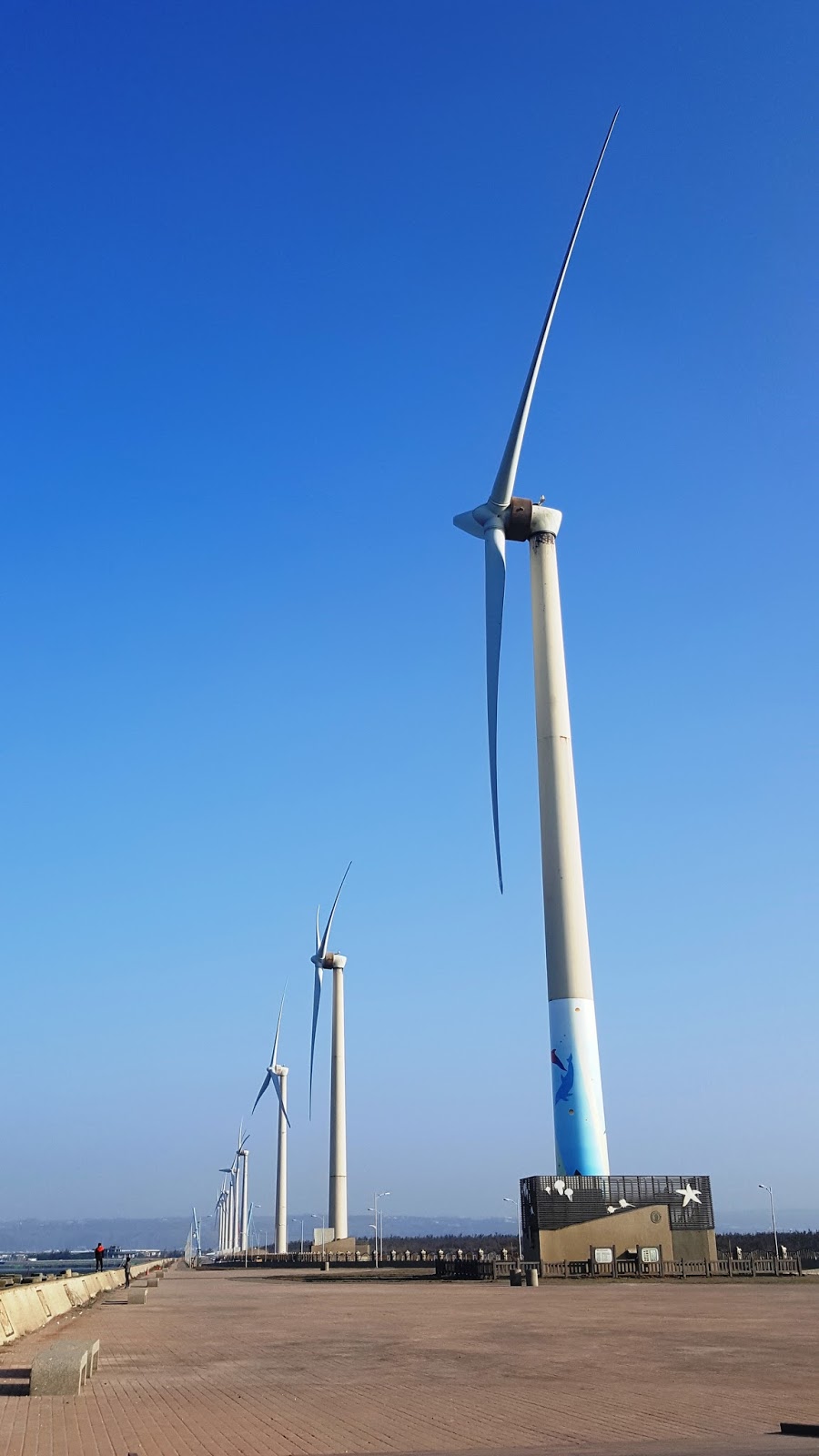 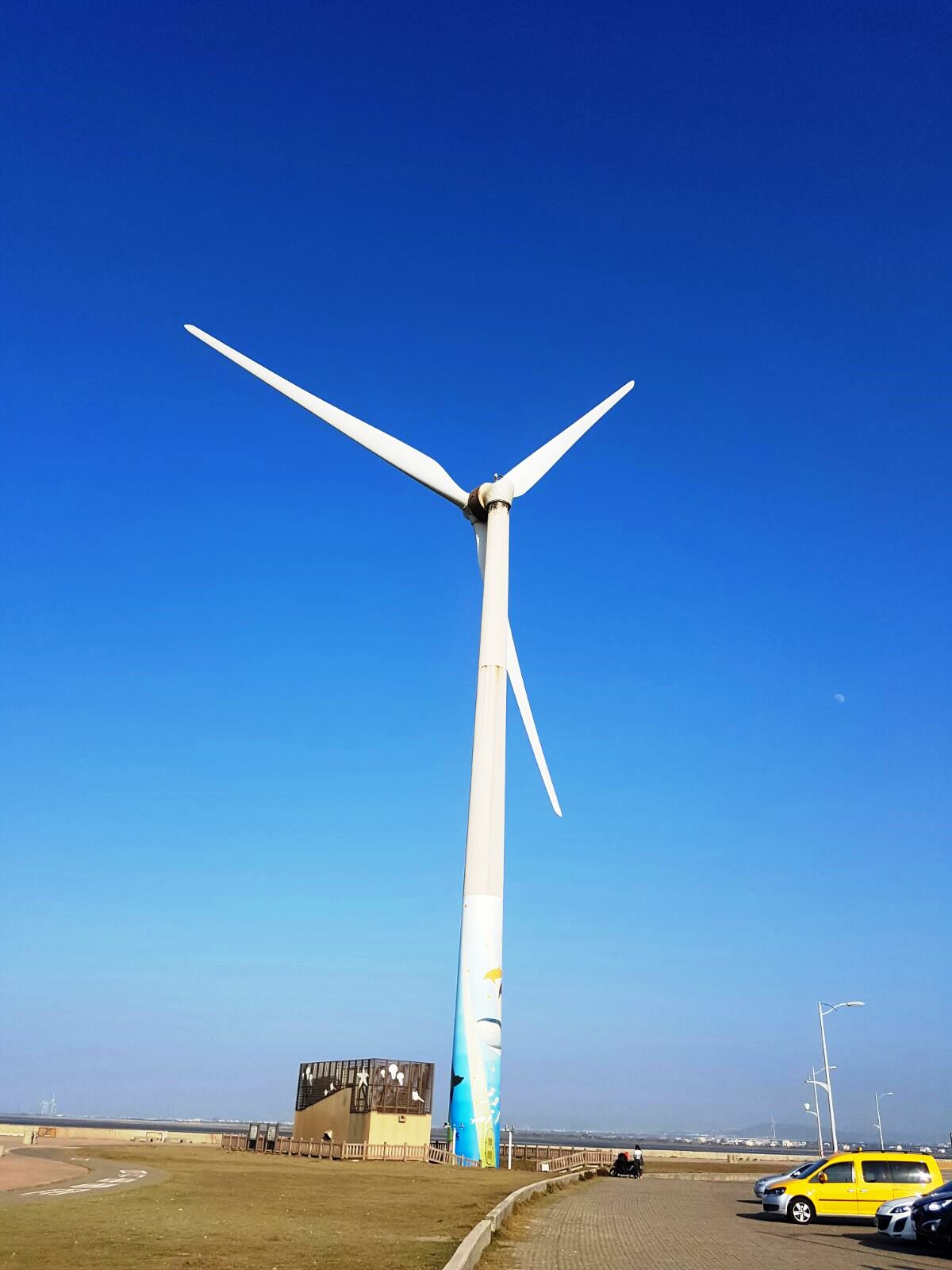 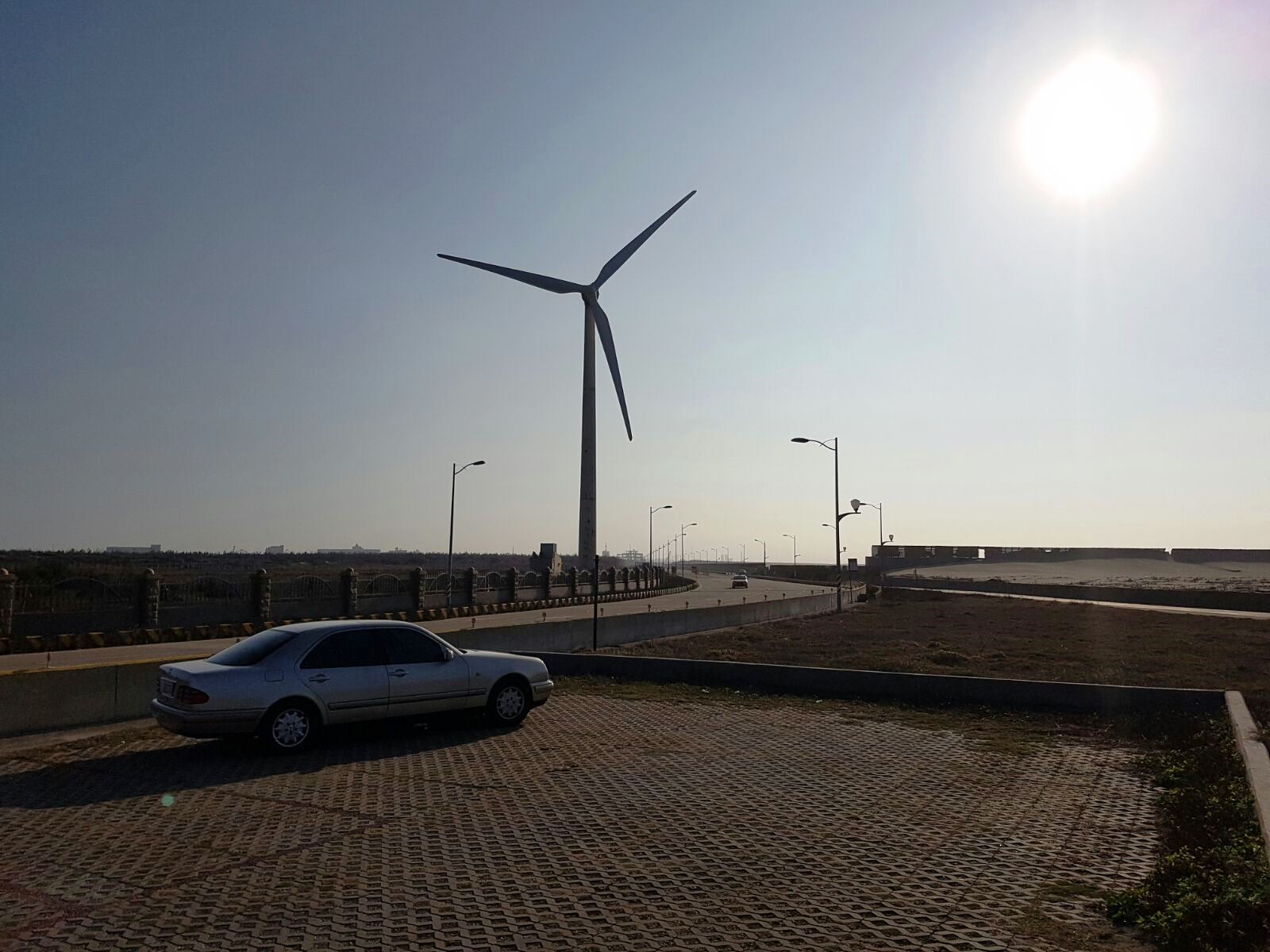 Finally we headed for Taichung High Speed Rail Station, I bought the train tickets back to Zuoying (which is Kaohsiung). This time I gave no chance to time wasting again for the journey and grabbed the non-stop ride. NO MORE STOPS IN BETWEEN. Enough!

While waiting for our boarding time, bought a railway bento (TWD 80) for a bite. In our opinion, this bento is better than the one we had on Taiwan Railway (台铁). Fresher ingredients and the meat has been fried before braising thus making it taste better without losing its moisture. 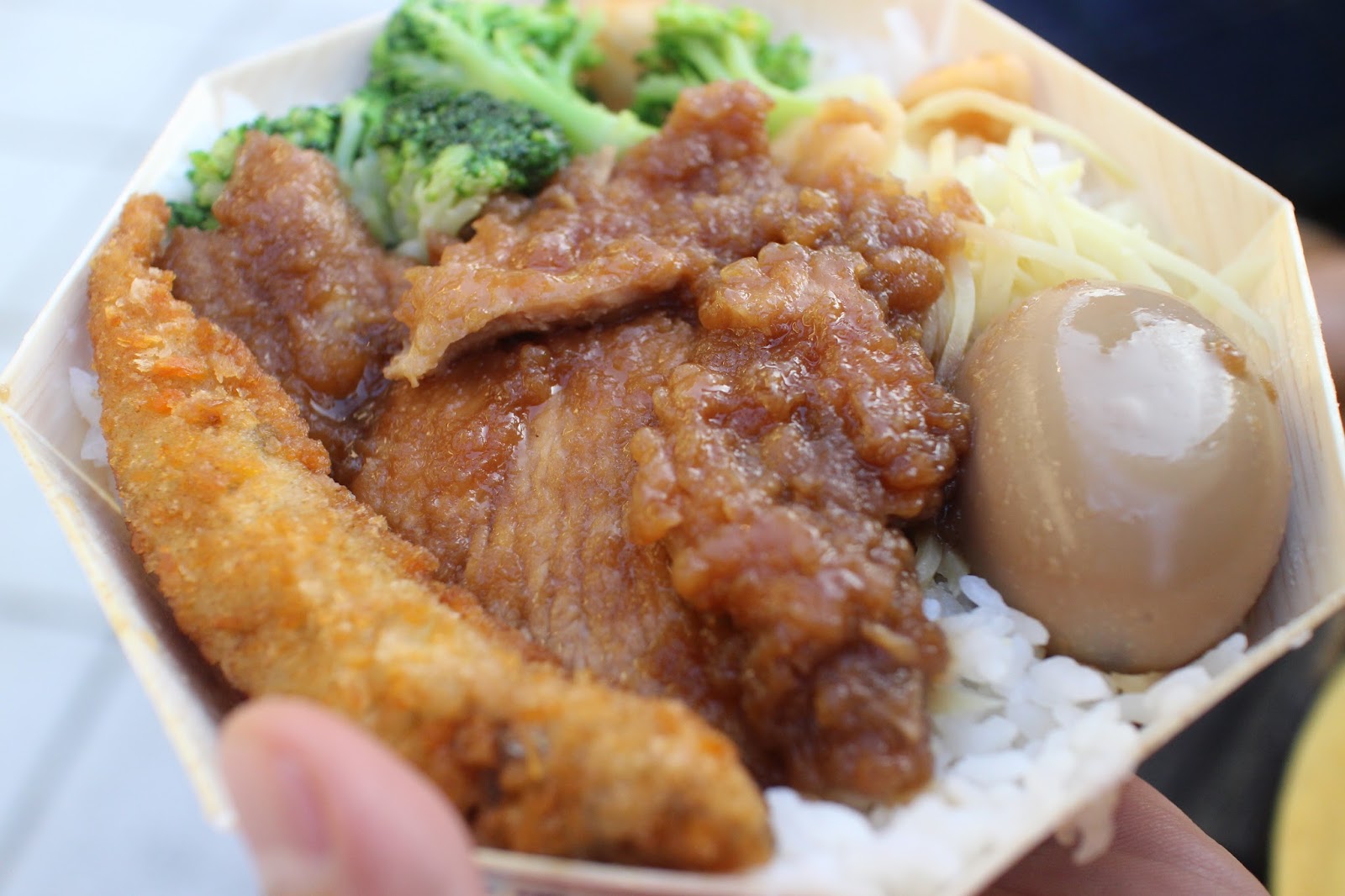 Plus the train ride by Taiwan Railway and Taiwan High Speed Rail, to and fro Kaohsiung and Taichung is about SGD 50 - 60 per pax.

Total for per pax will work out to be about SGD 100 plus minus.

Really worthy but not pocket-friendly trip here, especially for just few hours visiting just 2 places. Lesson learnt and will have a better planning the next round because I will be back to Taichung again for at least 2-3 days stay here. Till the next time Taichung.