How not to get fat during holidays? How can you resist not to try on local food when you are out of Singapore? But somehow, with a limited stomach capacity, you can't force down all the food that you see and wanna try. Especially when you are with your folks. As you get older, digestion problem gets in your way. So be considerate when travelling with elderly. They may want to try all the food like we do but they can't have much. So they would like to see us having it because we are happy, they are happy too.

Enough of my rants. Now let me take you through the food stops of my 3D2N trip in Ipoh. May not be satisfying enough for some but at least, I did my best. There isn't any particular recommendations but you might just want to know their food culture.


Have watched travel programs on television which featured this shop many times. They have other branches in Ipoh and this one was just opposite Concubine Lane. You won't miss it because of the prominent yellow signboard. And in fact, if you never try the beansprouts in Ipoh, it is as good as you have never been to Ipoh. Compared to those in Singapore, the beansprouts here were fatter and crunchier. I'm not a fan of beansprouts but I had a lot this trip because it really taste good. And my brother reminded me to try their horfun too. Smooth and succulent. Great choice. 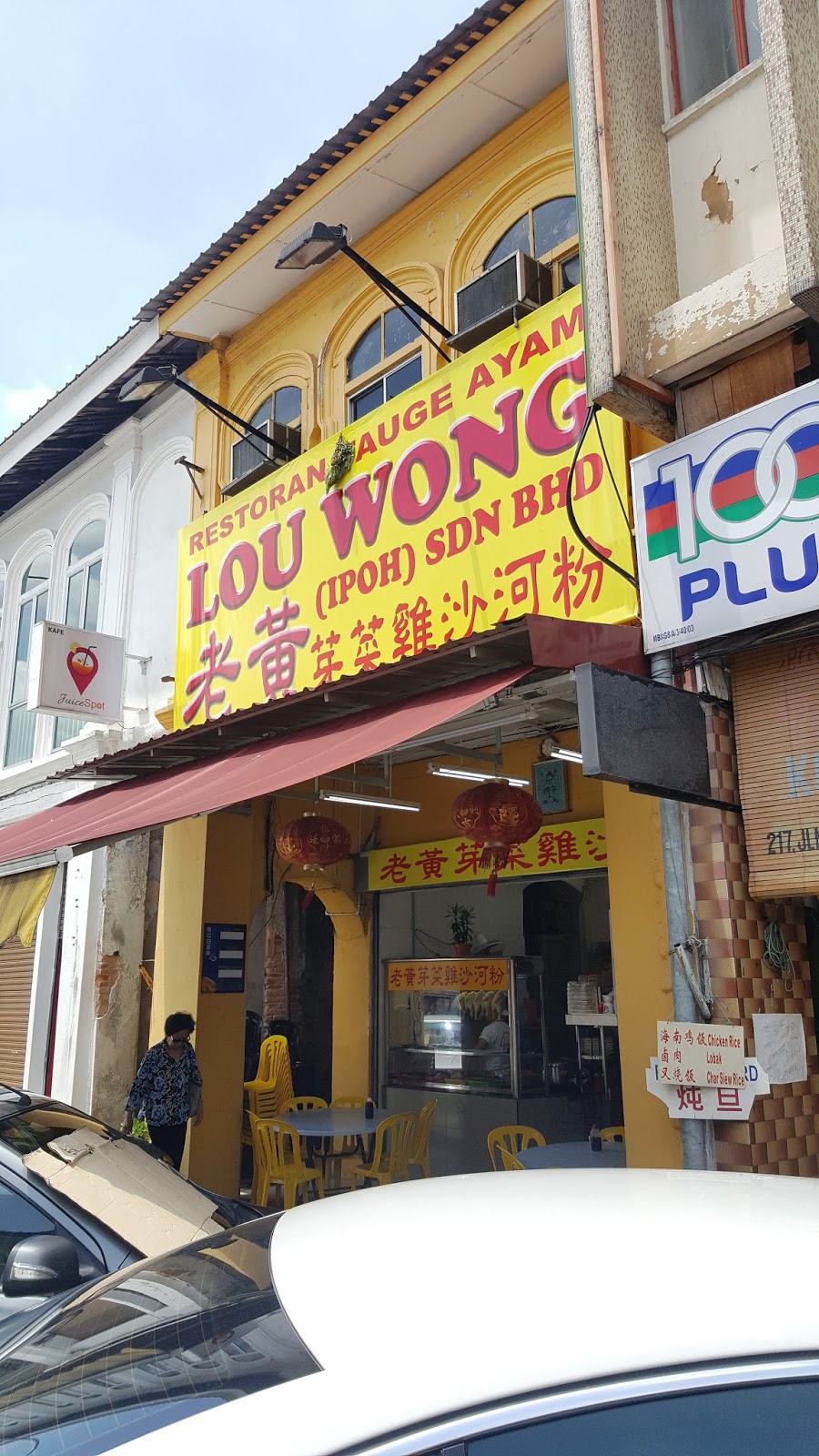 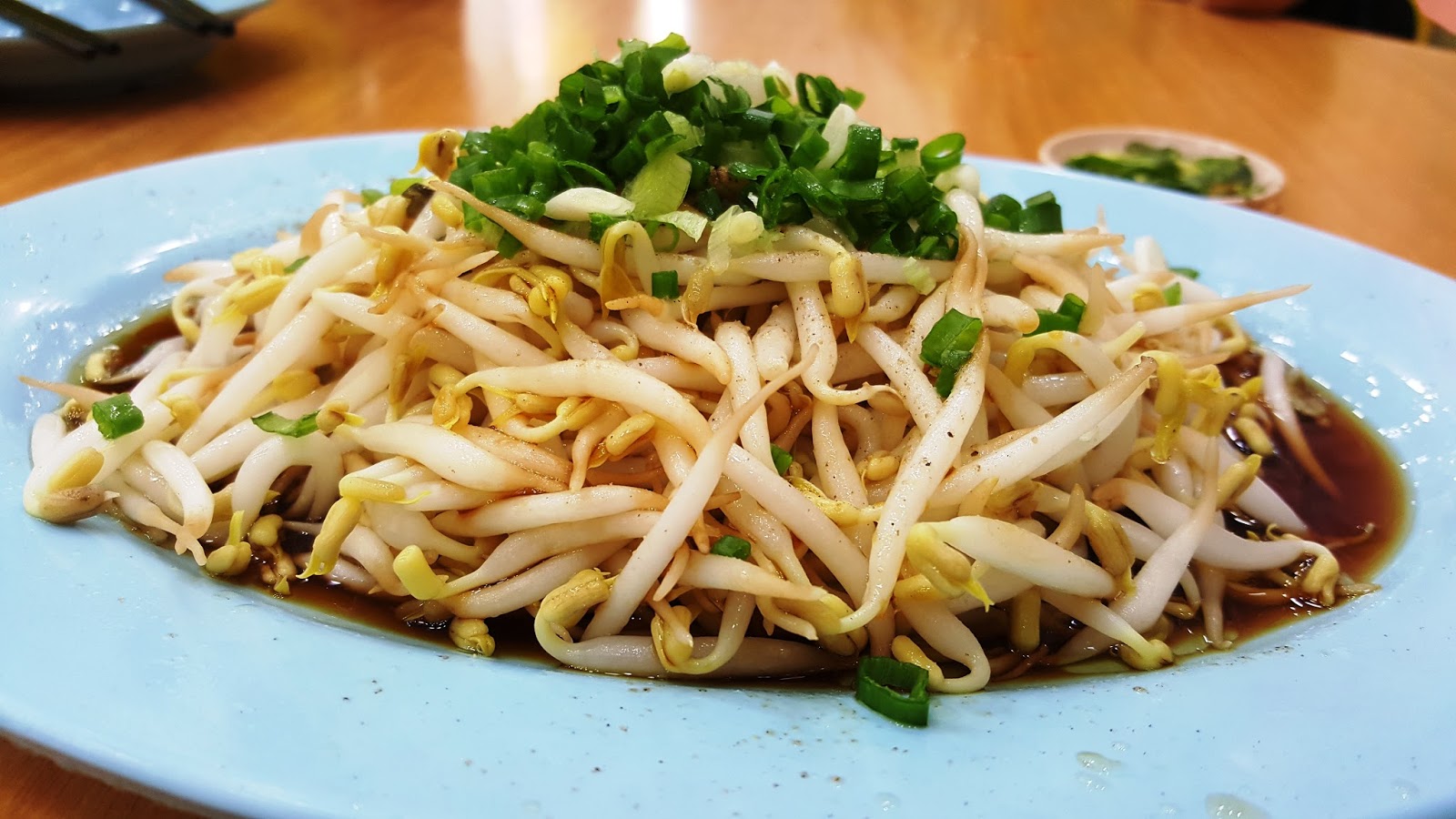 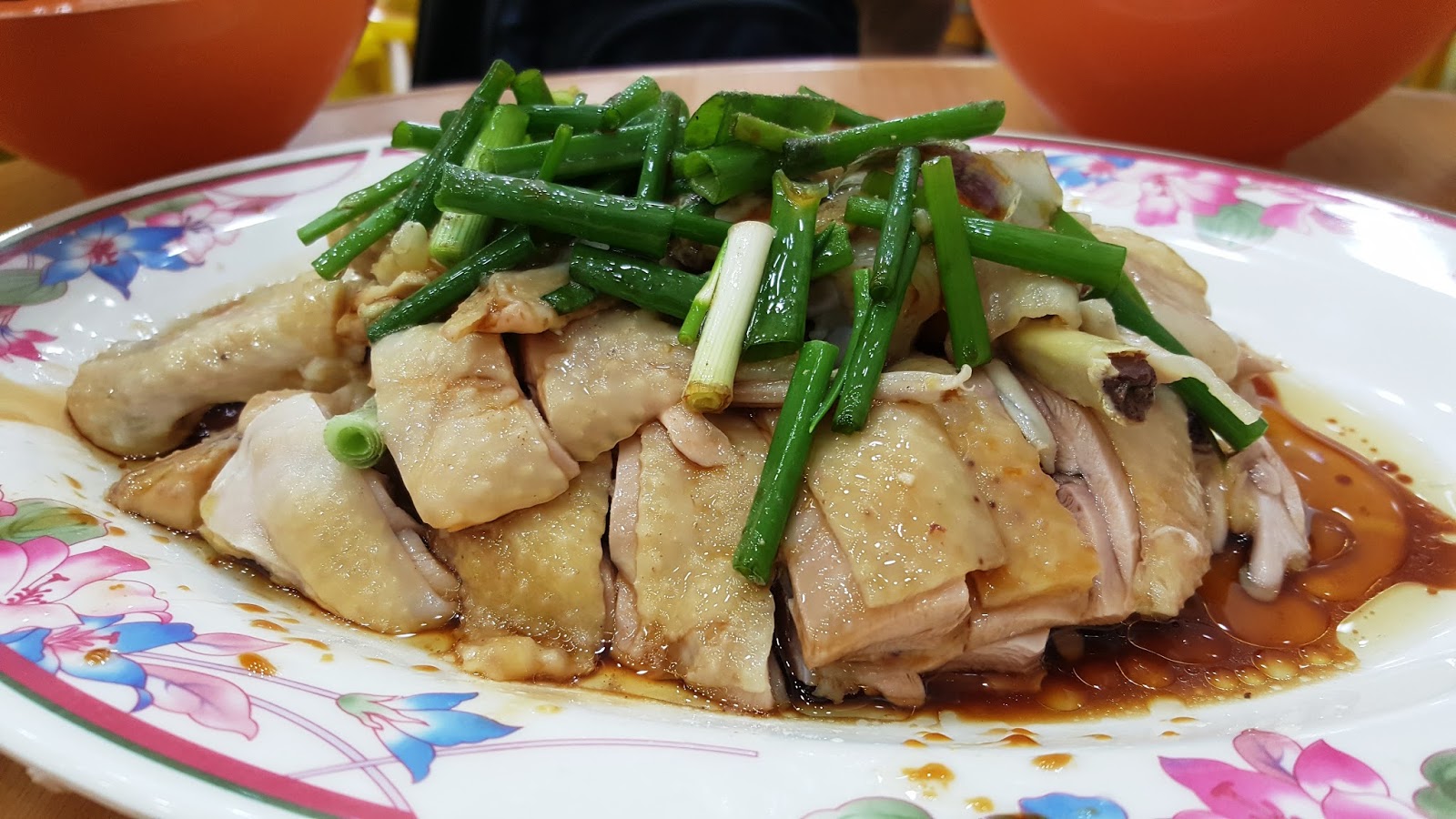 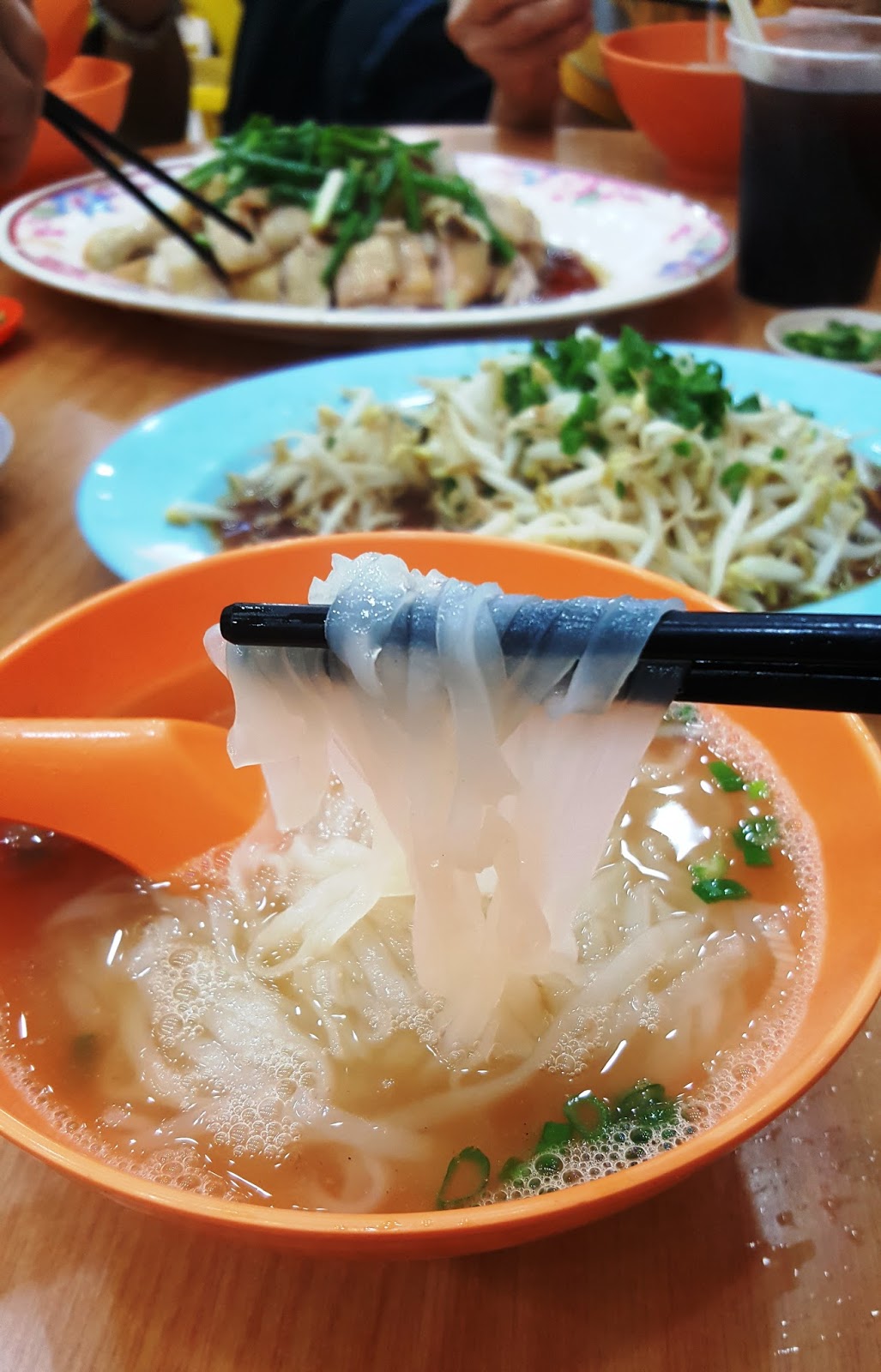 
This is another featured shop on travel programs. Their traditional Tau Fu Fah is on the sweeter side and according to our guide, there is another well-known shop that sells a not-too-sweet version but too bad, it was closed when we were there. How do you enjoy their Tau Fu Fah since they had no seatings? Just stand and eat. Or if you drive, have it in your car. But remember to return the bowl. A tiny bowl of smooth and silky Tau Fu Fah. Only if it less sweet. Around SGD0.50 a bowl. Why not? 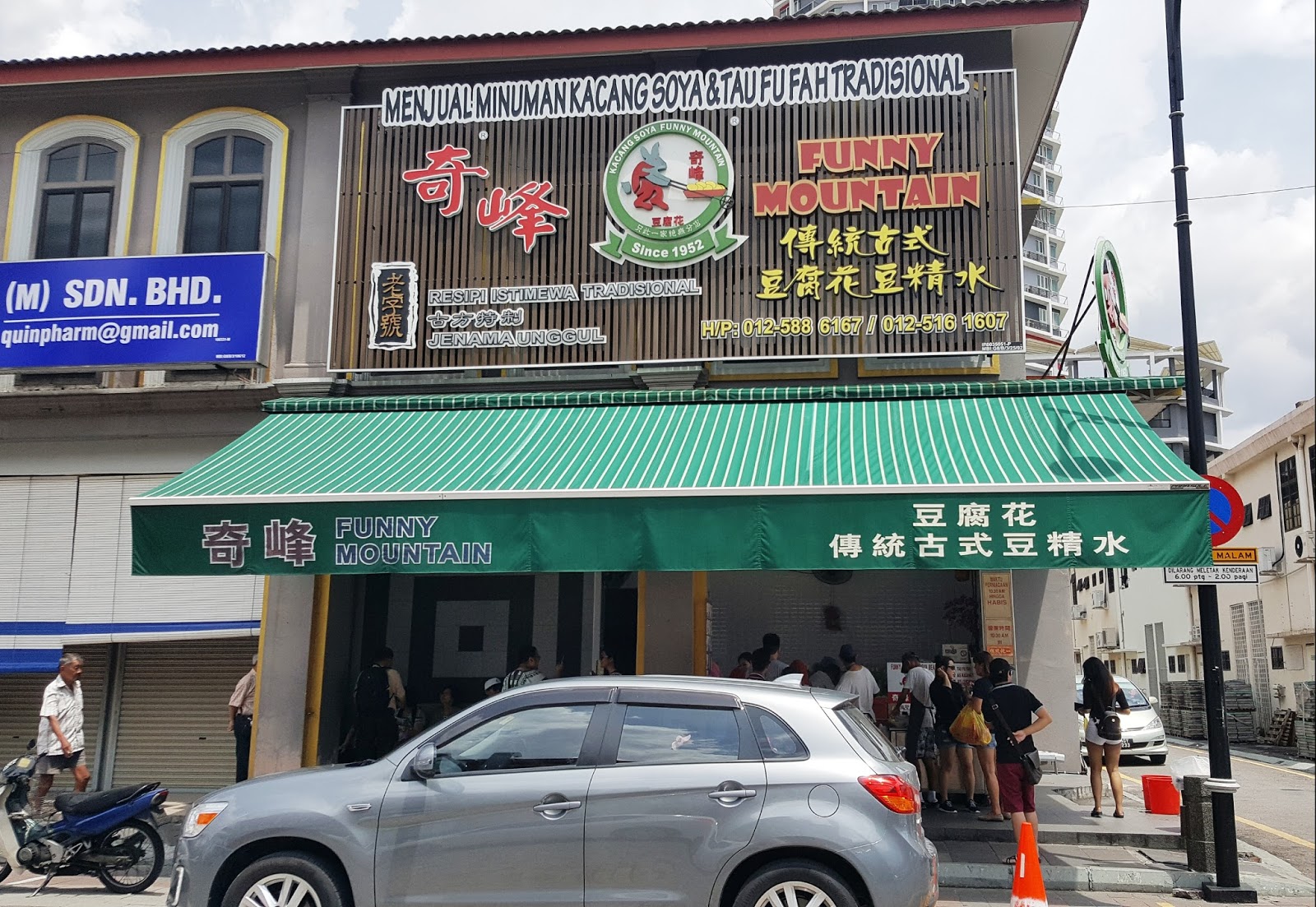 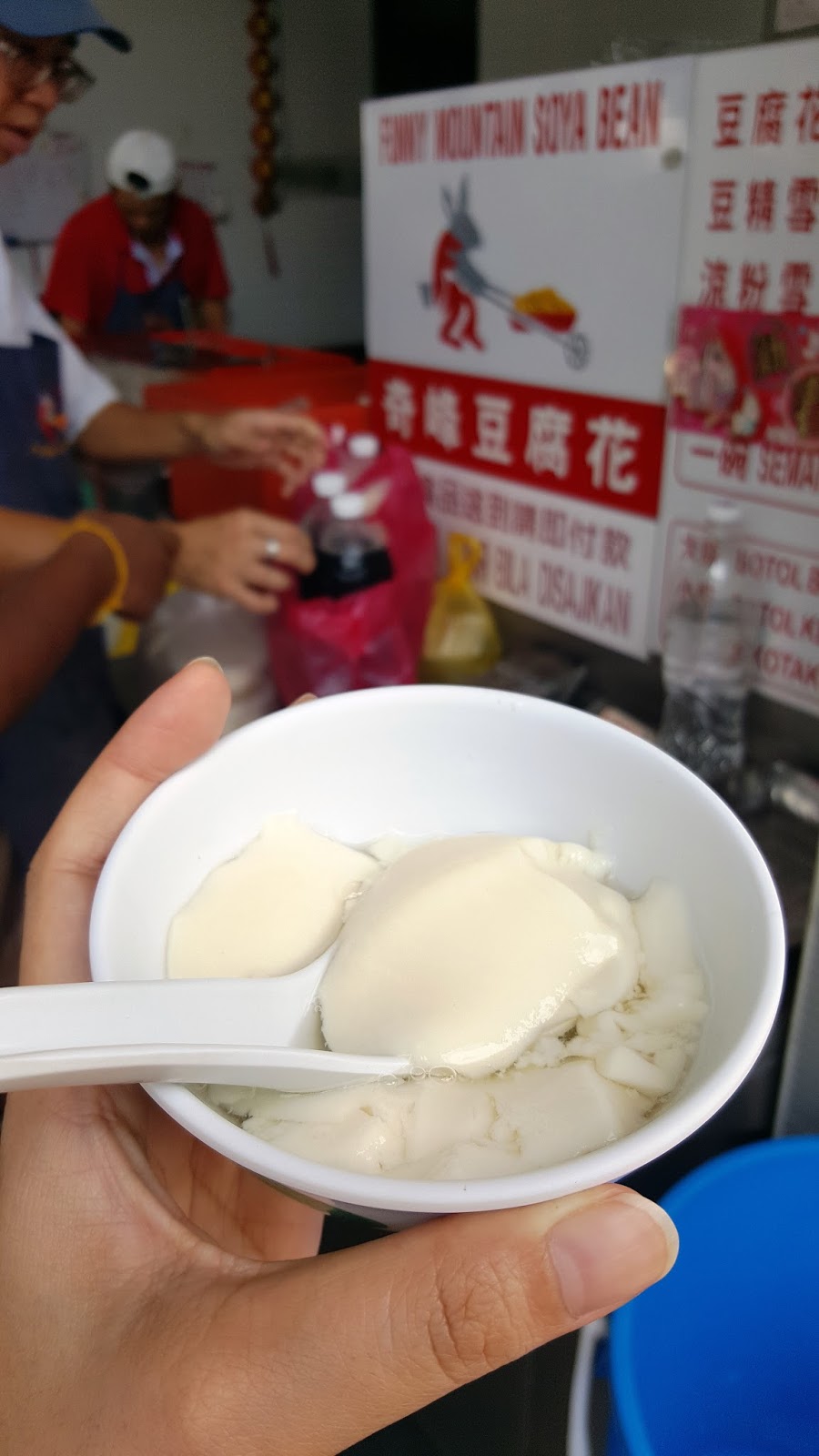 More like a coffeeshop under a large tree, Yong Tau Foo was what we were here for in the late afternoon before dinner. But the selection was quite limited and to be honest, quite oily though. And again, I had horfun. Ipoh horfun.

There were other stalls selling wantan mee, bbq chicken and so on. The place was a little dirty and because it was raining, the feeling was made worse. 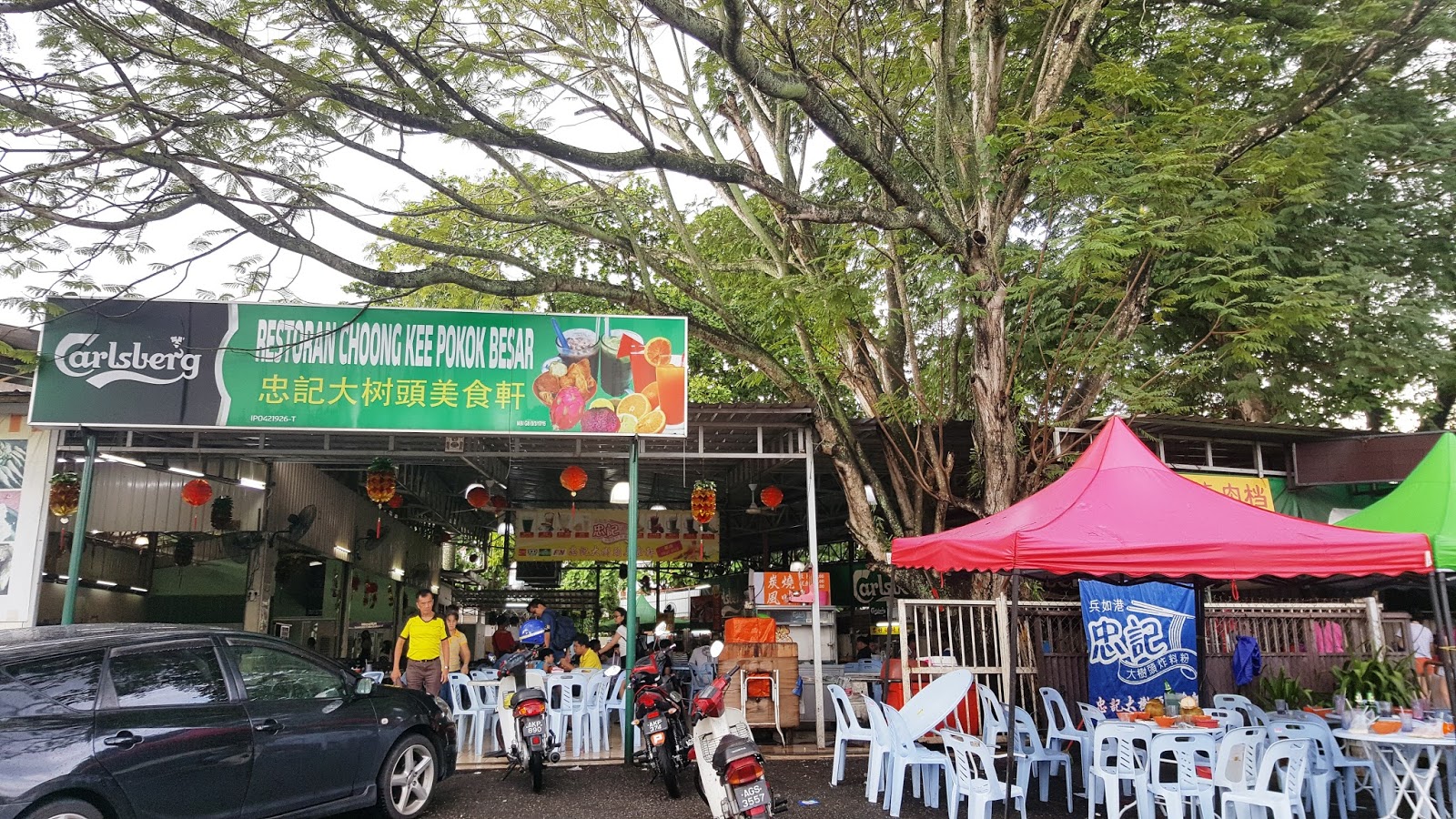 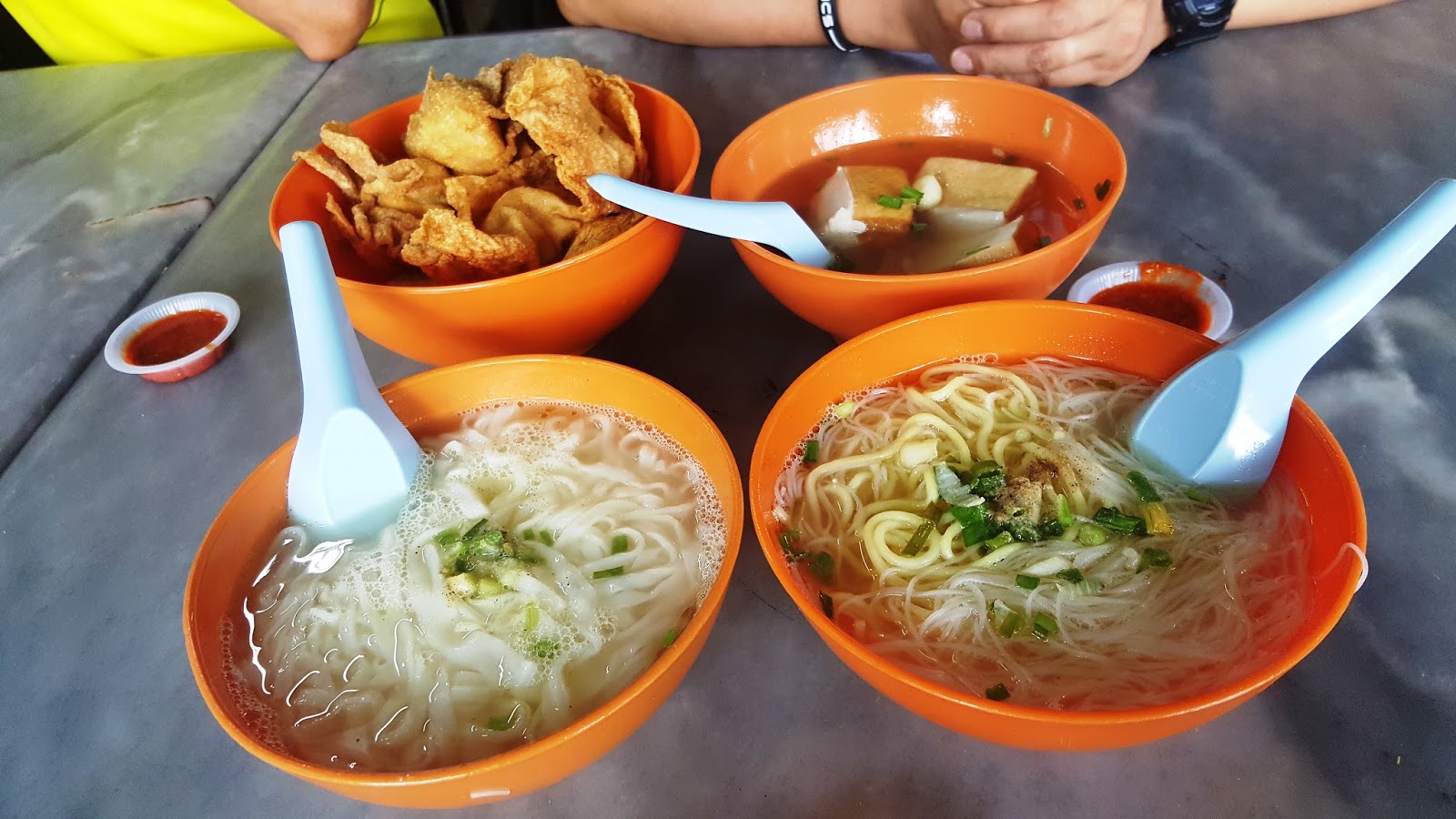 
Stopped by a pomelo farm and tasted the sweetest pomelo ever. Why Singapore never import from here? Look at those big fat pomelo on the trees. OMG. Bought half the peeled pomelo to try and thumbs up! 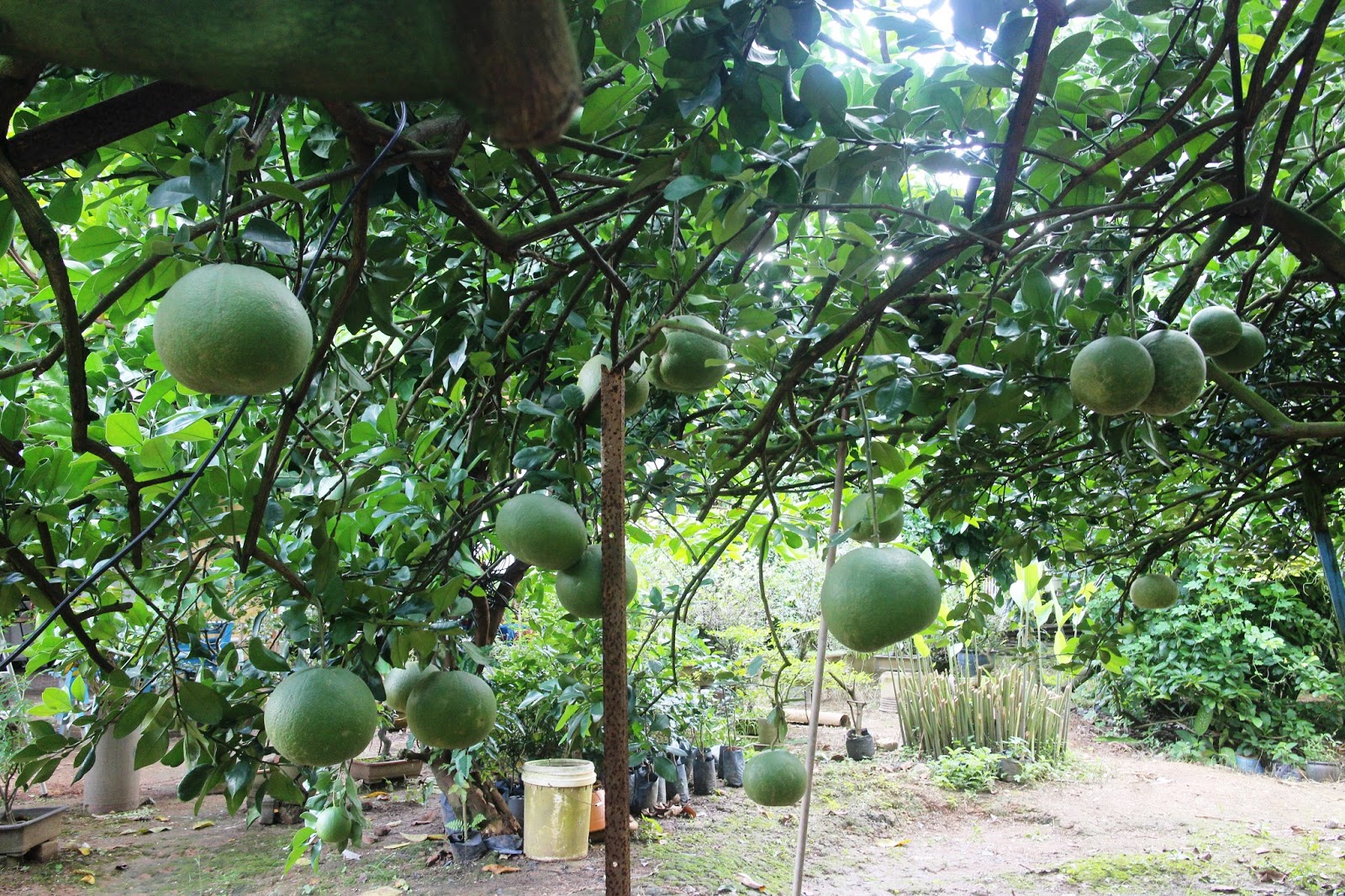 About 10-15 mins walk from our hotel to get here. The stalls there not just desserts but also others like claypot noodles, porridge, bak kut teh and more. The place looks like Singapore in the 60s and 70s. That was what I told my dad. What a familiar sight. I feel old though.

Had claypot noodles that was less than SGD2 and a dessert to share for only SGD2.50. That was so crazy. Happen to know the porridge stall sells pig bleed porridge. OMG... I miss Taiwan now. 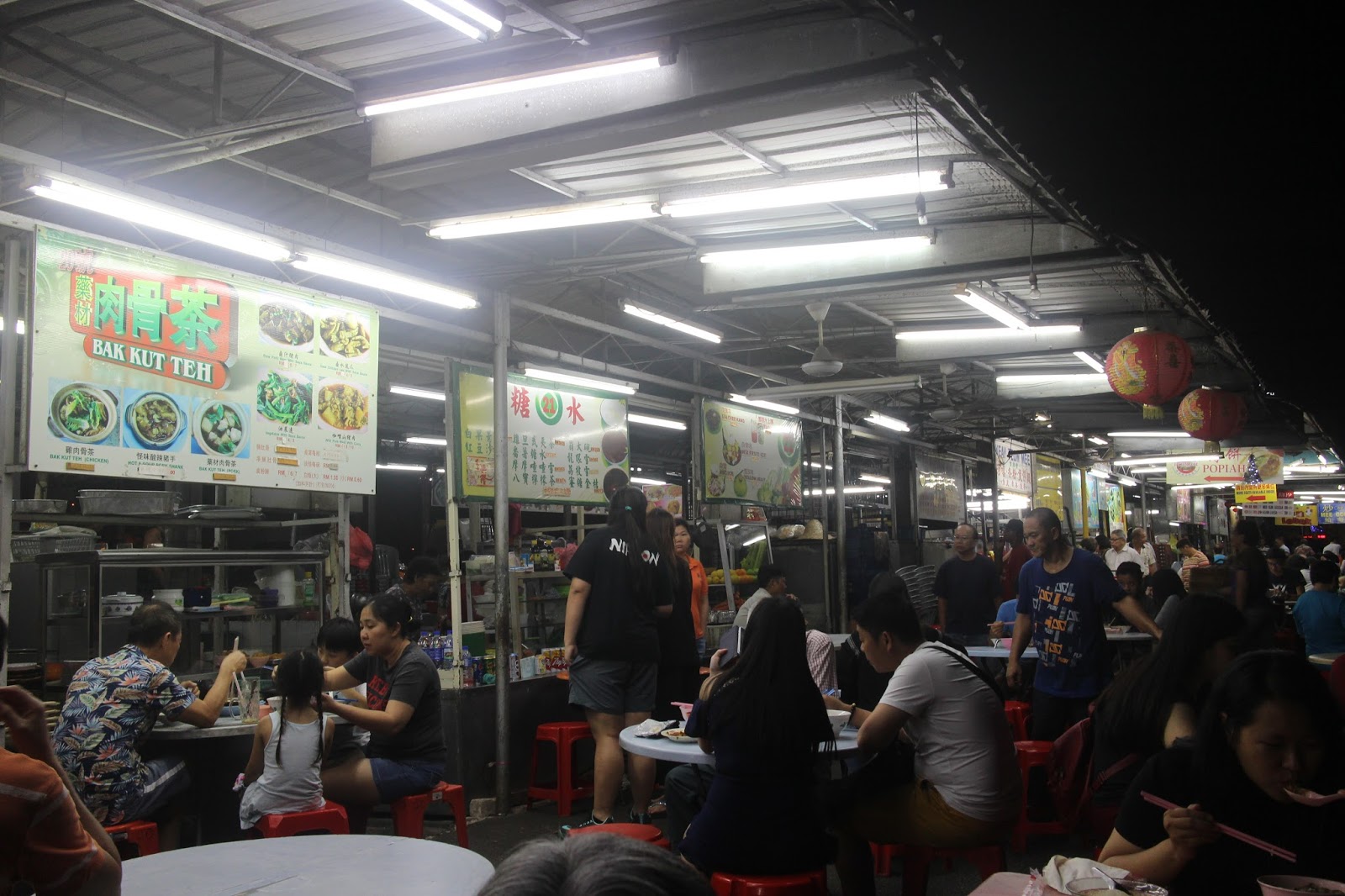 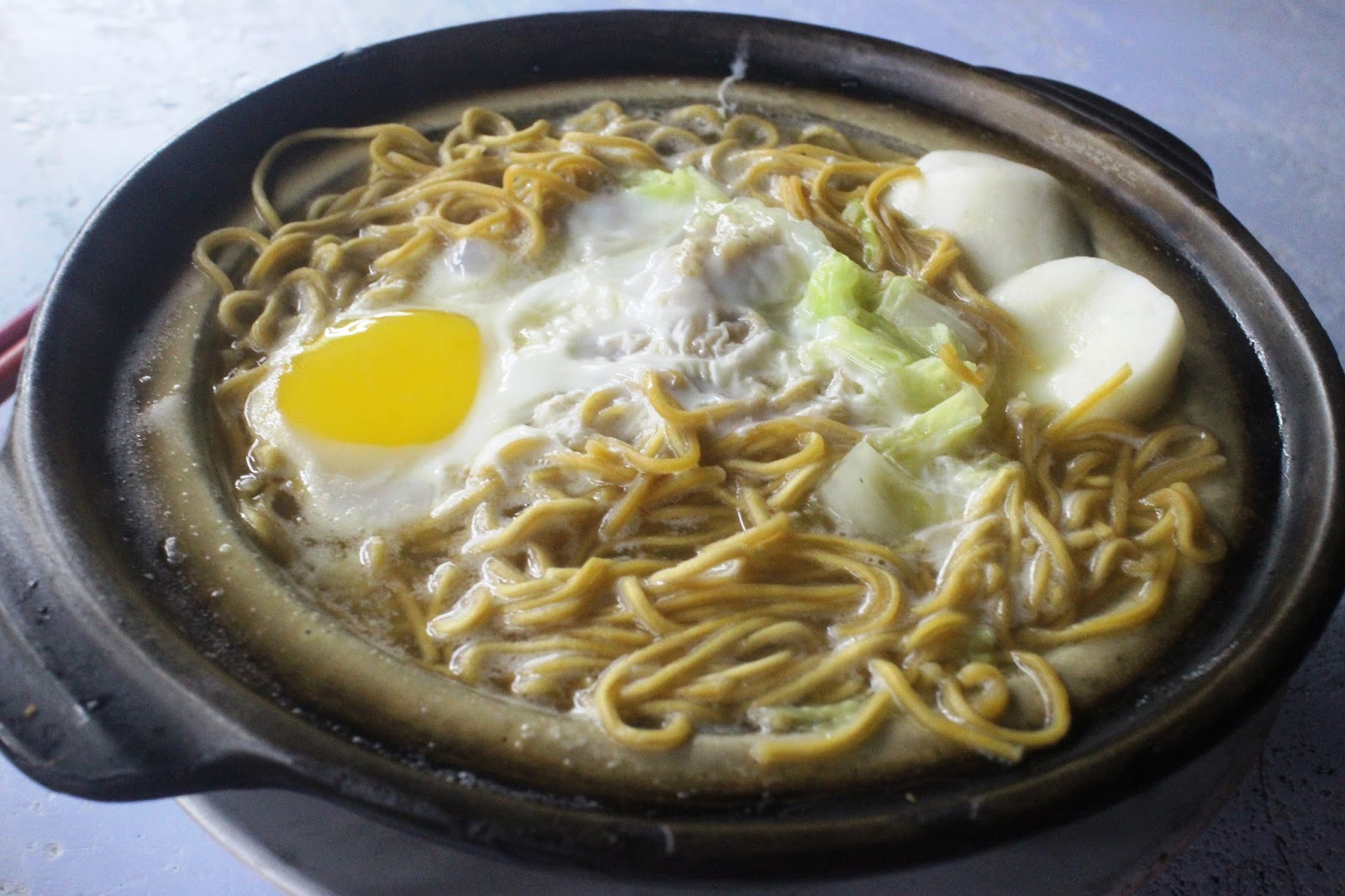 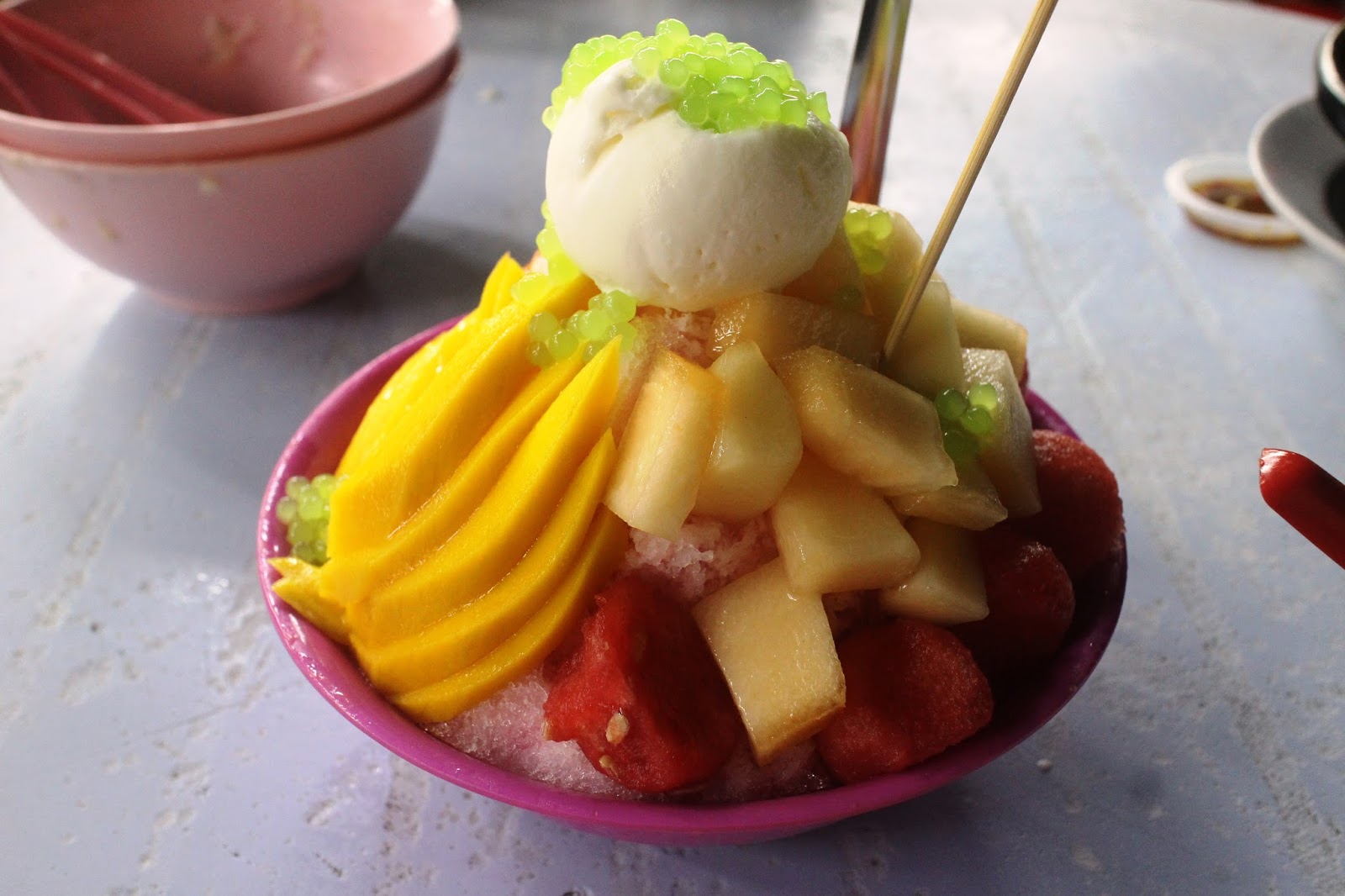 We travelled to Taiping on our 2nd day of the trip. Lunch at the fishing village called Kuala Sepatang. Peaceful with birds chirping away and breezy wind despite the hot sunny day. How nice! Spent about SGD28 for all the dishes. What do you think? Usual dishes we can have at Zi Char stall in Singapore. But isn't it cheaper? We ordered a bitter gourd soup, cereal prawns, fried squids, veggie and shrimp roe omelette. Tell me about it. Satisfying meal here. 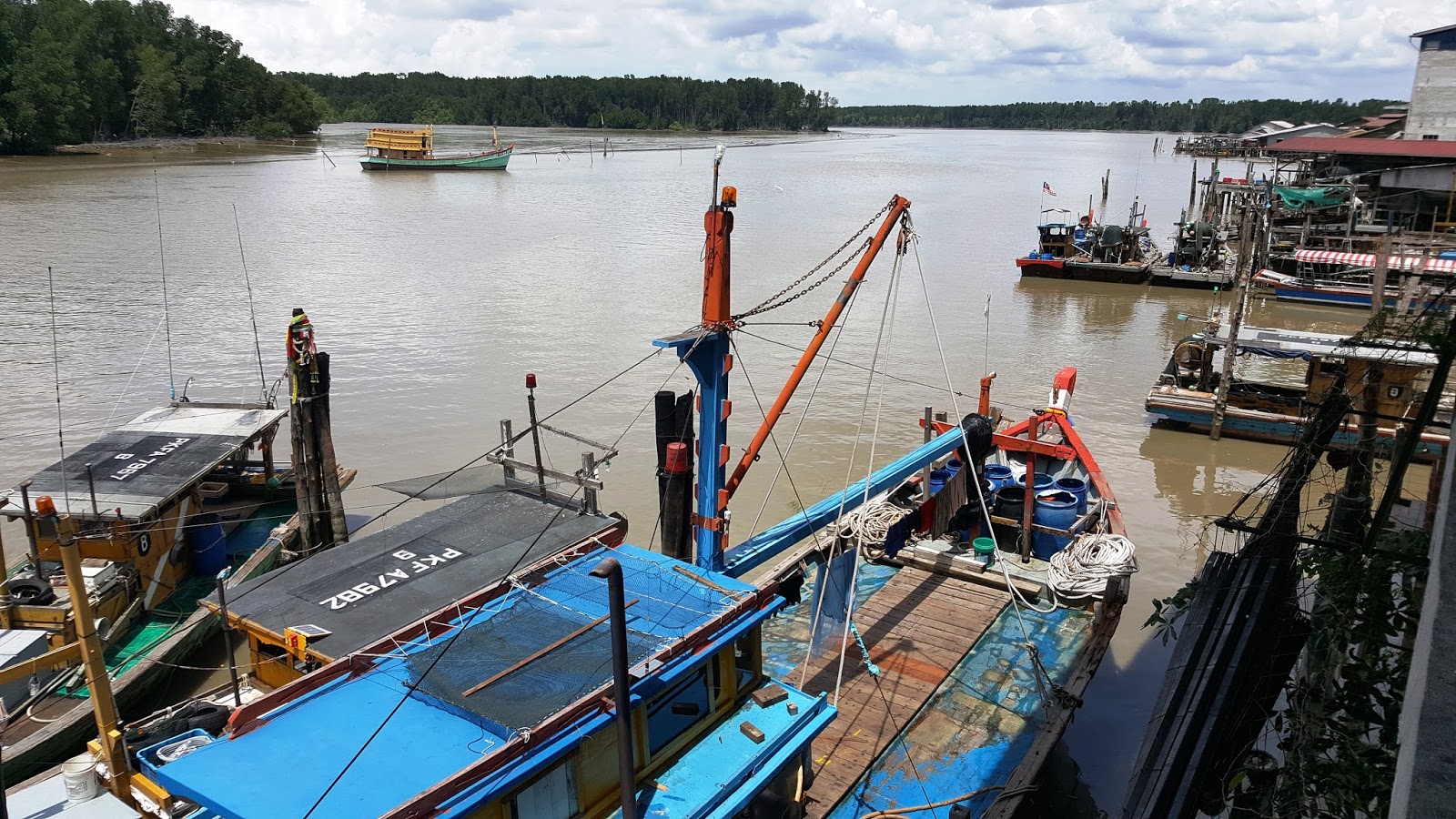 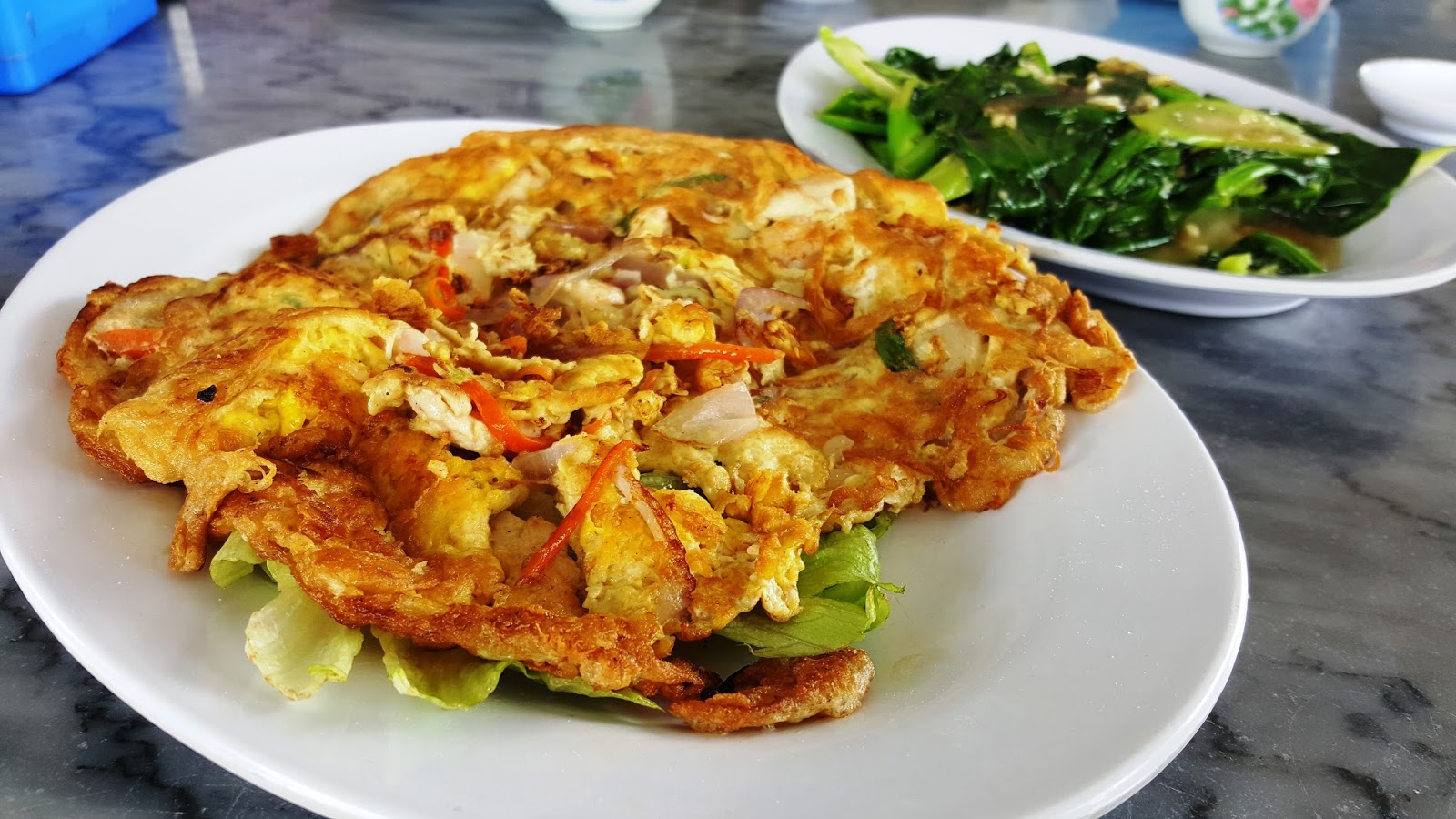 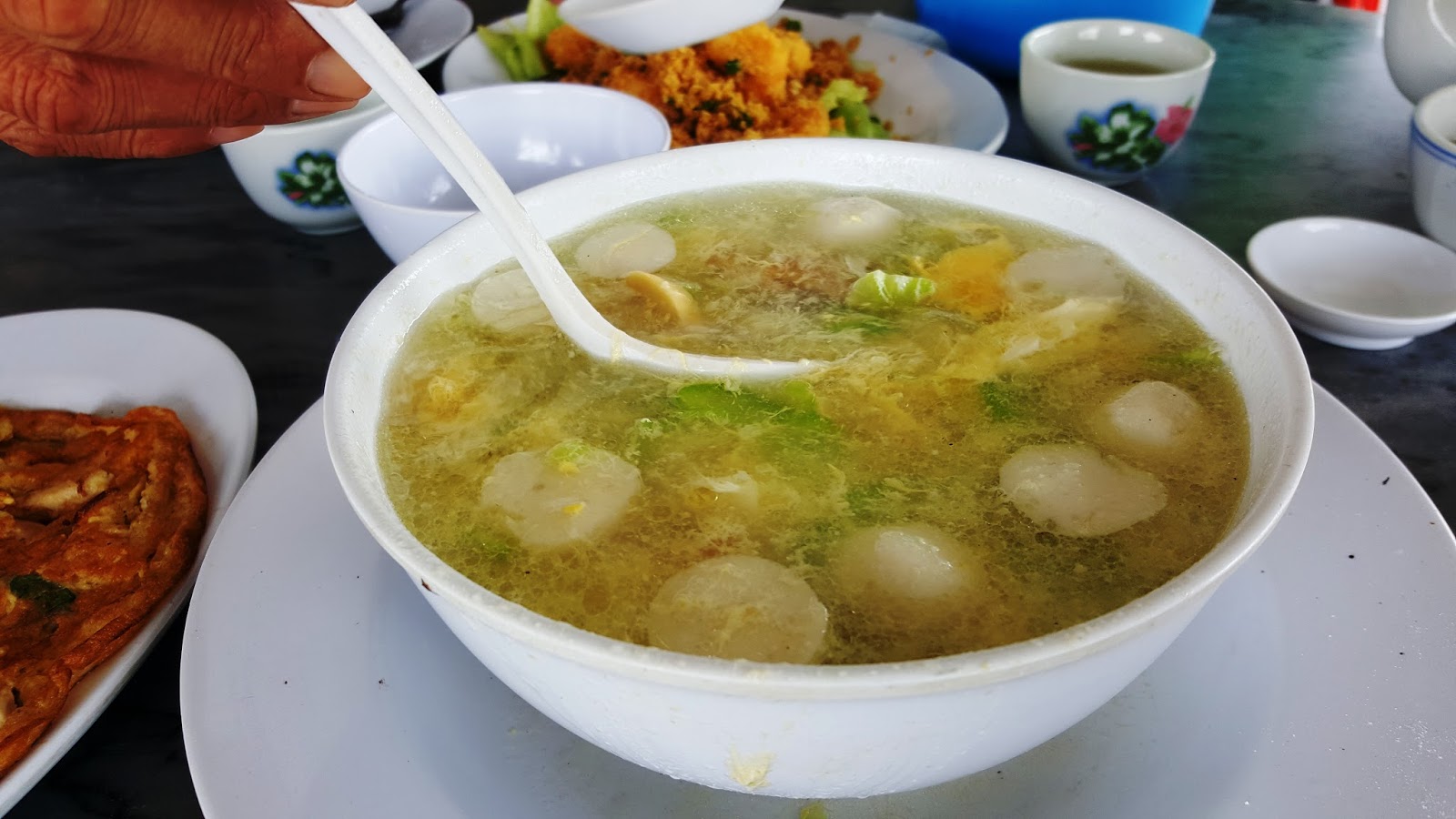 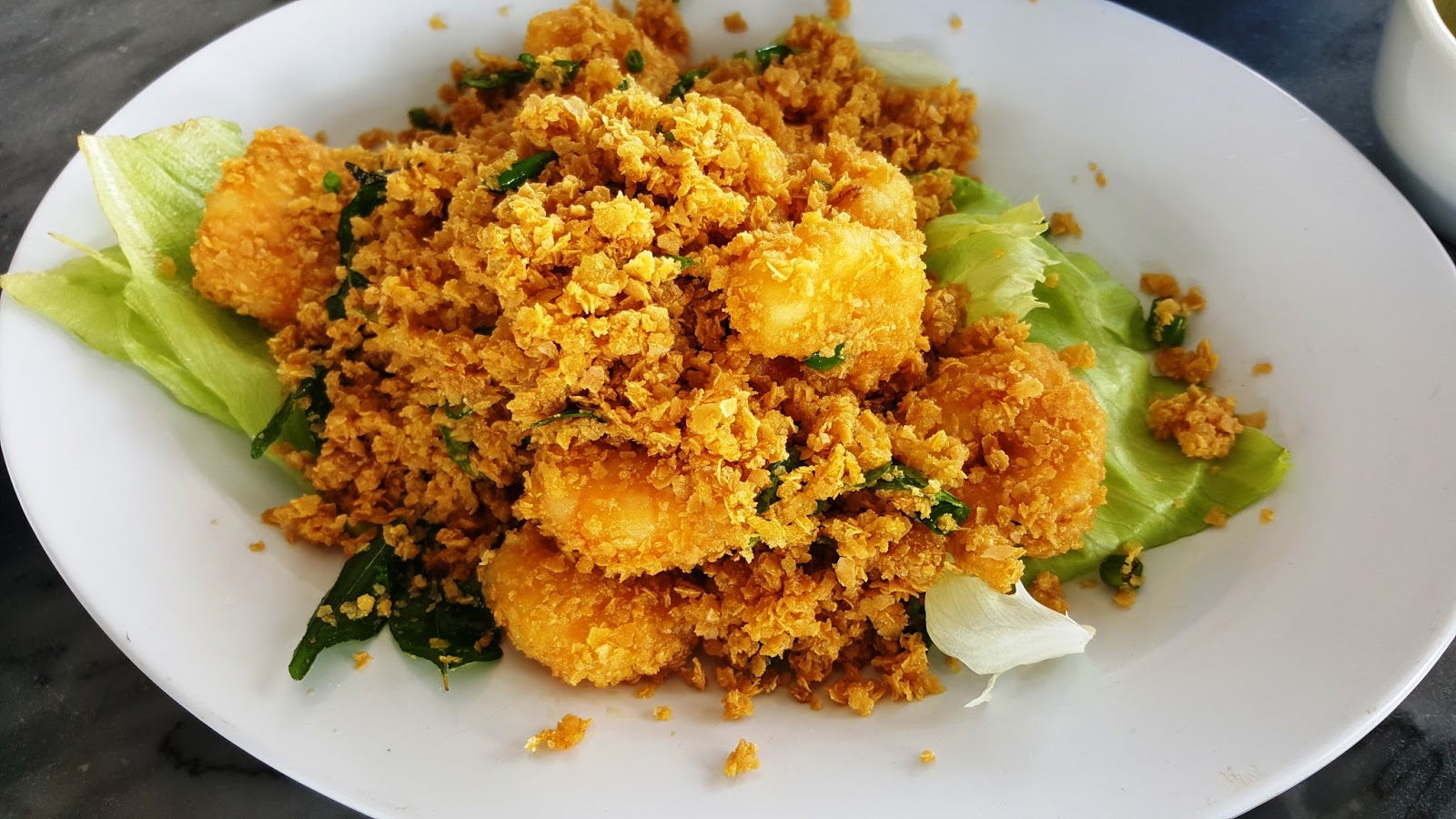 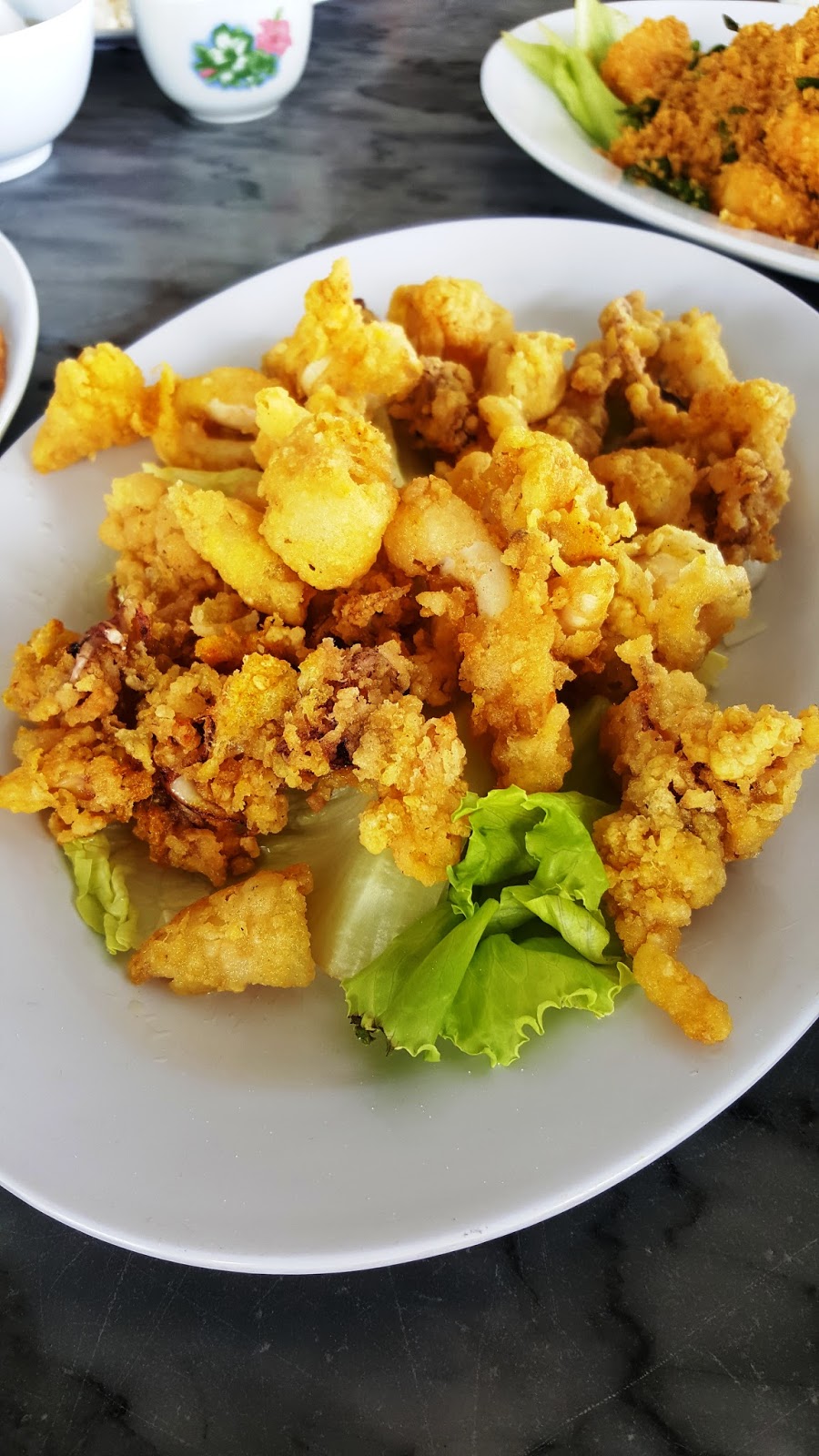 
A coffeeshop by the roadside and because we arrived in the late afternoon, the variety of dim sum was limited. Less than SGD5 to get these lot of stuff. Better than nothing right. The zhu chang fen was good with different mixes of sauce and sprinkles of sesame seeds (the usual) and fried shallots. At least by now, my folks should be satisfied about having dim sum here in Ipoh. 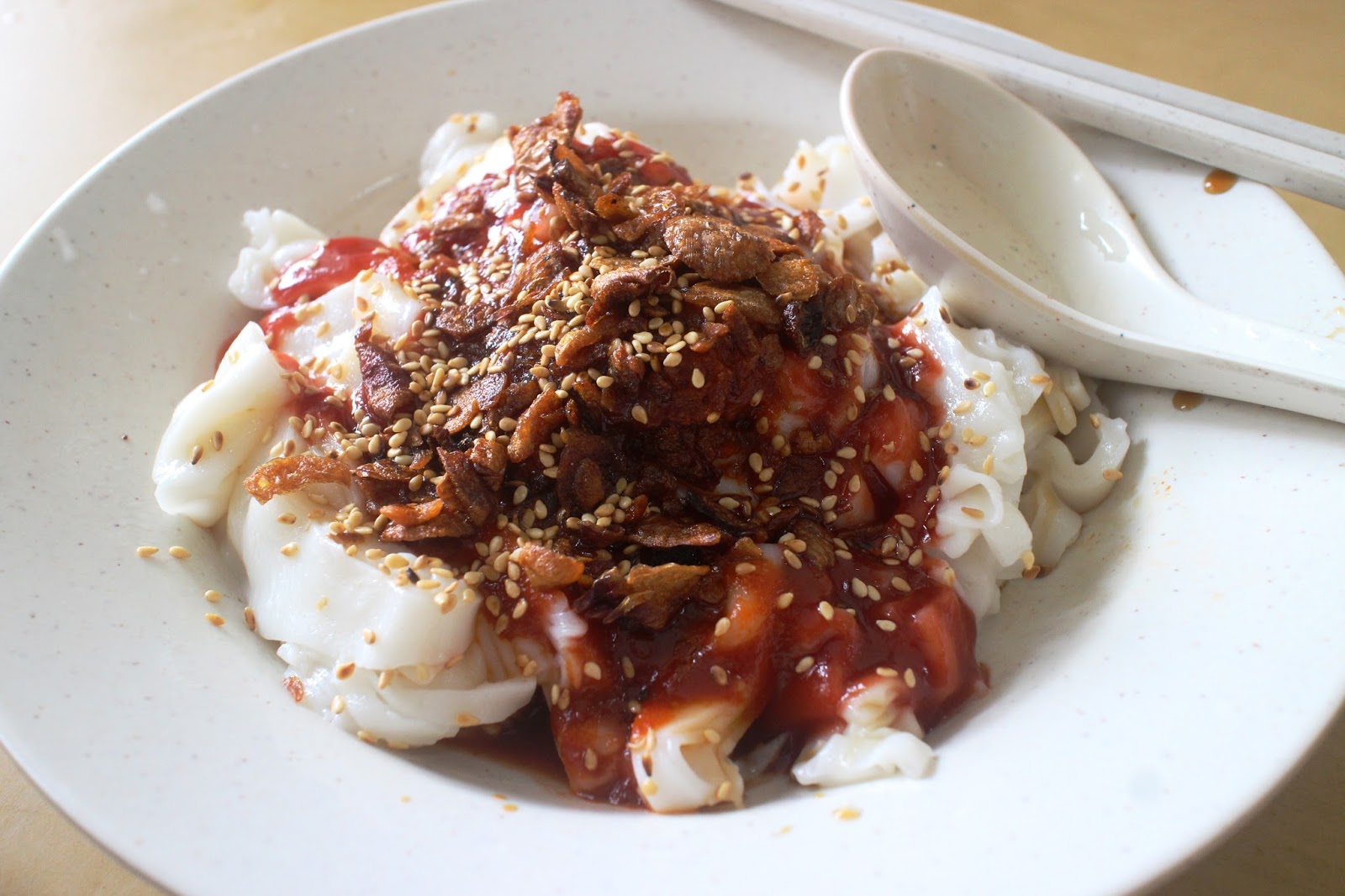 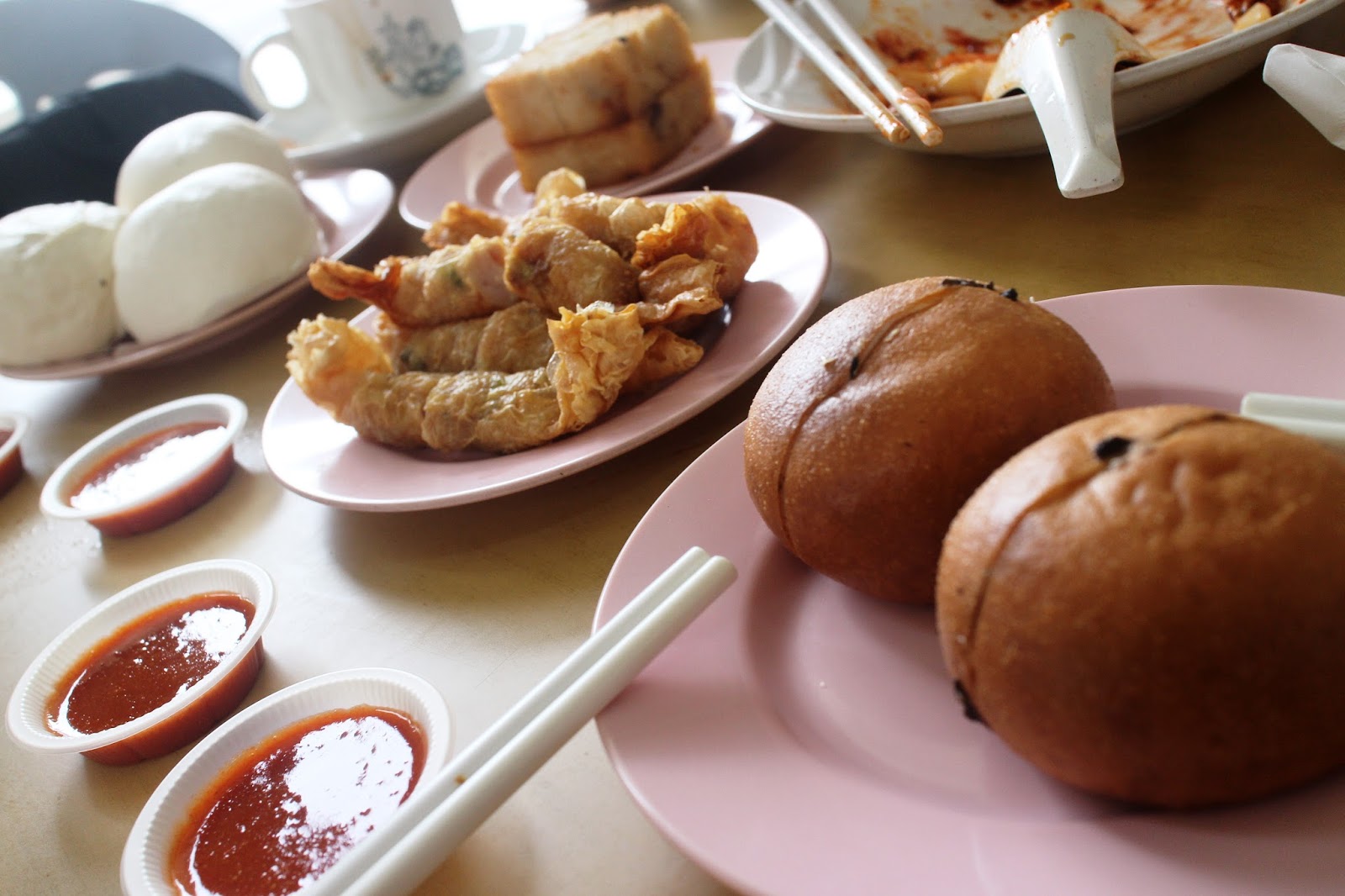 
Heard so much of 汤师父 from my friends who always went JB for it because there is one at City Square near the custom. Raving reviews from them so this time I'm not going to let the chance fly by me.

The soup looks more like ABC soup to me but tastier than any other soups I had before. Light herbal taste which was good because I don't really like it overwhelming. The boiled rice with their soup was very good and that was agreed by all 4 of us. Husband regretted having the braised pork rice. Not up to his expectation as compared to those in Taiwan or probably here, more on a healthier side according to him. However, I don't know how they name it but it was dried scallops instead of whitebaits. White fungus, good to have because of its crunchiness. The french beans was unique in a way because they used the Pu-Er leaves to stir fry with it. Nice choice.

Overall, the dinner was good and cost about SGD40. Very simple dishes served or maybe it was because of what we ordered. However, if you ask whether would I go back again, probably yes but not anytime now. The nearest one is at JB. Maybe if I feel a little richer, I will bring my folks there to dine in again.

The guide brought us to a Dim Sum street where you can find many dim sum restaurants around. The popular one was full house. So explored another less crowded one which was just around the corner. Priority. No need to follow the mainstream. Other restaurants could be just as good. Here, I love their Har Kow because of the fresh prawns wrapped within. The egg tarts were very flaky. About SGD 15 for all on the table plus tea. Worthy or not, for you to decide. 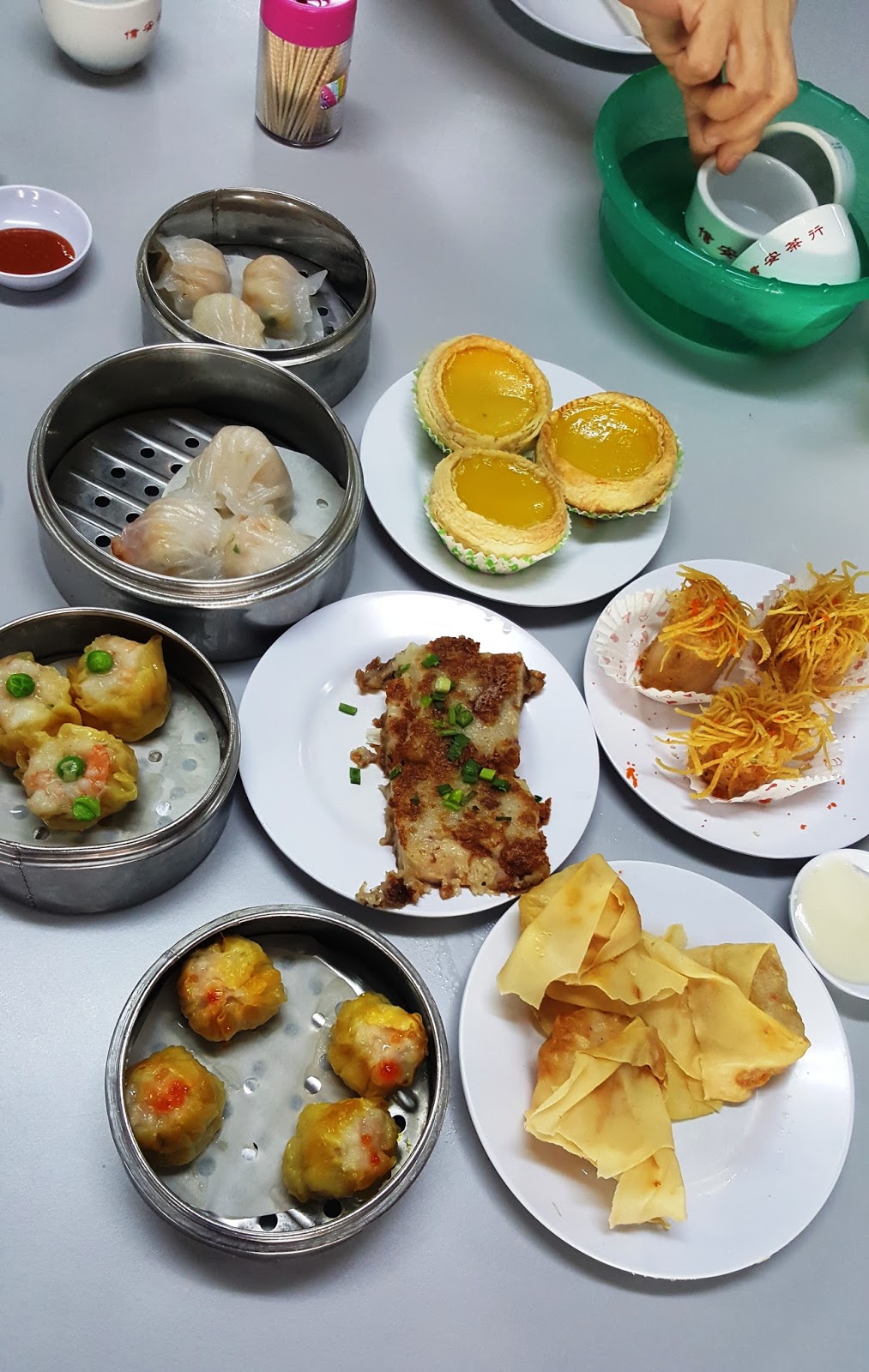 
Last stop before heading to the airport. Simple lunch venue to end this 3D2N trip. Cost less than SGD15 for everything. Can't say any fantastic about this place but apparently, I had more roast duck than roasted chicken, which was unusual for a fan of the latter. Indeed their signature roast duck. Tender and not too dry which caused the loss of moisture.

That's all for my food stops. And now let me wrap up this post with a breakdown of the travel cost.

Breakdown of my 3D2N Trip to Ipoh

Firefly Airline: about SGD 205/pax (with refreshments for a 1 hr 30 mins flying time)
Weil Hotel: about $220/room or $110/pax for 2 nights (booked via Booking.com)
Meng Passenger Service: about $66/pax for transfers and 2.5 days tour
NTUC Income Travel Insurance: about $19/pax


Sultan Azlan Shah Airport is the only airport in Ipoh and to get there from Singapore, you can drive for hours or fly by Scoot or Fireflyz if you are on budget. For Fireflyz, you get baggage allowance of 20kg and refreshments on board. All inclusive in your ticket price. But bear in mind, it is a small plane and the seating plan is like 2 x 2 each side of the plane.

Weil Hotel was recommended by Meng Passenger Service and no regrets because of the link to the shopping mall, Ipoh Parade. I must say that the hotels I booked for my trips to Malacca, Penang and now Ipoh were definitely good. Why? The snacks and drinks in the room is complimentary. Cheapo me but this is a plus point for me to the hotels. You can look for my past travelogue and find out more.

I found Meng Passenger Service on Facebook. Based on my previous experience from booking my Penang trip, I thought why not just try my luck again for Ipoh. Bingo. I got in touch with the person-in-charge via FB Messenger since March 2017. Finally this trip is executed now. Actually I asked for a RM20 discount to make it a whole number but then sometimes, we really need to be reasonable because the price is really reasonable already. So I just happily pay for it. Shall write out on my itinerary in the next post.

Had a great time with my folks and husband though it was just 3D2N and hope you peeps enjoy. x 2 the price for a couple trip (SGD800) or a single pax for SGD400. That excludes expenses used there for food, entrance fees and shopping because it is quite individual. Next post, on the places to visit. Stay tune.